Shelby: I don’t have any kids, but I assume parenting is hard. Not just because you’re trying to figure out how to keep this small creature safe and provide for it and raise it in a way that it doesn’t turn out to be a total douche (presumably that is a common parenting goal), you’ve also got to put up with a deluge of “help.” Everyone who’s raised a child, as well as no small number who haven’t, believe they know the best way to do it. And they are more than happy to give you all sorts of advice on the subject. No matter how sound that advice may be (like, “you should probably get a job”), if it’s unsolicited it will probably be poorly received.

Alana and Marko have been enjoying their mini-vacation on Quietus with their new, extended family.  Heist happens to have a Wreath boardgame called Nun Tuj Nun!, one of Marko’s childhood favorites. The family game night scene gets ruined, however, when Klara tells Alana it’s time to stop playing house and get a job to support her family. Alana doesn’t take kindly to the “helpful advice” and storms off. Marko follows and tells her they can find something that doesn’t leave them chained to a desk or supporting the war effort at all, that they will figure it out. Meanwhile, The Will is finally getting his ship repaired, and has decided (to Gwen’s delight) to head for Quietus after all, instead of settling down like the ghost of The Stalk was pushing him towards. As he’s just about to leave, he gets a call back from the towing agency; apparently there’s a parasite on the planet called Heroine that somehow alters visitors’ brain chemistry to convince them to stay as new hosts. Hallucinations may be involved. Just as The Will realizes what this means, Sophie appears and stabs him in the neck, goaded on by a vision of her mother/The Stalk.

Let’s start there. So the visitations from The Stalk were not some sort of ghost/conscience/magical entity, it was a straight-up hallucinations caused by an outside party. It’s both a relief and a little disappointing. It’s a relief because it fits in with the tone of the story better. Despite the fact this story revolves around a war between a group of people with wings backed up by robot royalty and a group of people with horns who use magic, it has a very down-to-Earth (no pun intended) feel to it. Isabel is a legless ghost babysitter, an innocent victim of the war? Sure, I’ll believe that. The Stalk is somehow appearing to The Will and offering seemingly sound advice? SOUNDS FISHY, I DON’T LIKE IT.

Brian K. Vaughan has crafted a world where a brain-chemistry-altering parasite is a more believable situation, which I think is a mark of the strength of these characters and that very world he’s created. At the same time, it’s a little disappointing, because I really like The Stalk and The Will together. He and Gwen make for an interesting potential couple, there’s no doubt, but there was some comfort in the thought that The Stalk was still around for him somehow. I’m curious to see how The Will and Gwen are going to get through this. I don’t doubt The Will could die here, but I suspect it’s too early in the story for him to go quite yet. Is Gwen seeing things as well? What about Lying Cat? When do we get to meet the parasite Heroine? My favorite part of this scene is The Will trying to tell Sophie what she had done wasn’t her fault. It’s a simple, touching way to show the feelings he’s developed for this little girl, and I hope she’ll be able to get over what she’s done here.

The bigger focus, for me, this issue was the confrontation between Alana and Klara. The arm wrestling match between the two of them really emphasized for me how similar the two of them are. They’re both strong, fierce, independent women; I think the biggest difference is Alana doesn’t have the same self-confidence as her mother-in-law. I think, too, that Alana hasn’t had things as hard as Klara has just yet. Don’t get me wrong, Alana has not had an easy past, but Klara strikes me as a woman who feels very deeply, and hides those feelings because she recognizes them as a potential vulnerability.

Alana doesn’t play that game, though I think if she had stayed much longer in the military, she would have. The story her commanding officer on Landfal offers to those fish-y reporters is that Alana was sent to Cleave as a punishment for hesitating to fire upon a number of civilians. Not that she didn’t eventually pull the trigger, just that she hesitated to do so. That’s a hesitation the Countess Robot X does not have to worry about. 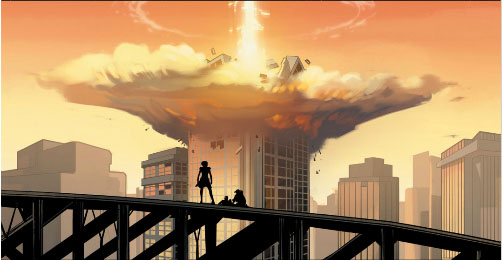 Vaughn continues to amaze me with the way he can so seamlessly blend mundane family issues and events (struggles with the in-laws! board game night!) with the bigger concepts of the effects of war, all set against Fiona Staples’ beautiful science-fiction backdrop. Drew, what did you think; any ideas about what kind of job a couple kids on the lam could find? Is it just me, or does Nun Tuj Nun! seem like an awesome game? Some sort of combination of Pictionary, Risk, and drunken barroom challenges; I want to play it for real!

Drew: The best games are those you only see context-free snippets of — like Calvinball. My favorite part about the game is that the fight was apparently just a ploy to win the “Psych-Out Round,” or at least was only brought up now in order to win the game. “You’re a bad role-model for your daughter” is more of a let-it-fester-forever kind of sentiment than the bring-it-up-casually-in-the-middle-of-game-night thing, but Nun Tuj Nun! — or, as Oswald helpfully translates, “Now Means Now” — is apparently all about seizing the moment. I was a tad shocked that Klara would hit so far below the belt to win, but it seems like it wasn’t just to win. Indeed, the group doesn’t have much of a plan, and while we have the benefit of knowing that Prince Robot IV will be arriving in just a few days, they’re already coming to terms with the fact that they can’t stay on Quietus forever.

All that is to say: Nun Tuj Nun! might be a helpful at bringing problems to the surface (Klara lists “surviving the Harsh Truths” as an important component of the game), but I’m not sure I’d actually enjoy the experience. It sounds like Truth or Dare, but instead of juicy gossip, you get to have your self-esteem eroded by those closest to you. Yikes.

Then again, what people really think is kind of the order of the day, here. Heroine is basically the Mirror of Erised, showing the host whatever they want to convince them to stay. That’s a little too reductive — in Sophie’s case, it also needs her to kill those who would take her from the planet — but we can understand that the parasite largely works by making people want to stay. The fact that Gwendolyn hasn’t been swayed at all suggests that the thing she wants more than anything is (to apprehend) Marko, but I’m more interested in The Will’s decision to leave. 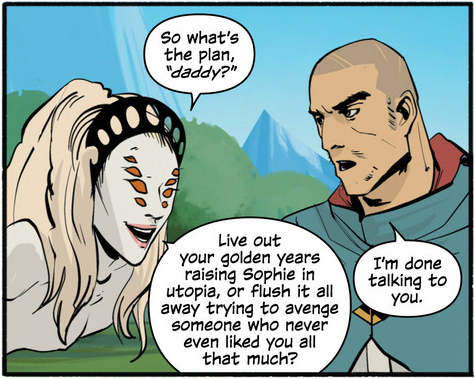 Knowing now that this phrasing is something out of his subconscious (albeit with the help of a motivated brain parasite) makes his decision to “finish what [he] started” particularly interesting. The first option is obviously more appealing, so either he really hates being a quitter, or some part of him doesn’t actually want to be happy. The fact that he considered quitting makes the former seem unlikely, and I can totally see The Will willfully torpedoing his own happiness (he clearly continued to pine for The Stalk long after they were no longer together).

What’s surprising to me about the development of The Will choosing to leave is what it says about his desire to keep Sophie safe. Any way you slice it, bounty hunting and/or revenge fantasies are no place for little kids. I feel bad using his momentary indecision against him — maybe he only ever wanted to stay because of Heroine’s influence — but he seemed to have Sophie’s best interests at heart when he wanted to stay. (Or maybe it was Lying Cat’s best interest — it wasn’t that long ago that he was this close to being collateral damage to this stupid mission.) Ultimately, staying on a planet isn’t really an option (though it’s not clear what the adverse effects of the parasite are — you know, besides making you stab your friends in the neck), but it’s too bad The Will didn’t opt for the peaceful utopia.

Of course, maybe the fact that we don’t chose the peaceful utopia is why there aren’t any. Countess Robot X offhandedly suggests that the Robots may have picked the wrong pony in the galactic war. It’s more of an idle gripe than a statement of fact, but the idea that there was a choice — that the outcome didn’t really matter that much — is fascinating. They chose a side because it was easier than refusing to, just like how she orders an airstrike because it’s easier than actually finding a single sniper. The parallels to drone strikes are not lost on me, but for me, the most disturbing part is the way the Countess rationalizes killing countless civilians.

We can never excuse the other side killing civilians, but we can always excuse it when we do it. I didn’t come to this series for timely political commentary, but this issue does it very well (although, unfortunately, this particular point may be more timeless than timely).

What a remarkable series. It handles family drama, high-flung sci-fi, and (anti-)war stories better than most series can handle any one of those genres. Hell, Vaughan even writes a relatable insurance adjuster scene (who else loved that the mechanic was a giant gnome?), just to set the action in a more believable world. Actually, that world-building may be the most remarkable thing about this series — this issue alone introduces concepts as varied as brain-altering parasites and alien boardgames. Really though, with everything firing on all cylinders (and I mean everything: plotting, characterization, pacing, the whole artistic team, etc.), there are few series out there that could even touch Saga. If anyone needed a reminder of that, this issue will certainly do the trick.