Today, Greg and Taylor are discussing Superior Spider-Man Team-Up Special 1, originally released October 30th, 2013. This issue is part of the three-part Arms of the Octopus story.

Greg: Towards the end of Mike Costa’s swiftly engaging issue, Cyclops asks Bruce Banner a grim yet oddly understandable question: since the Hulk causes so much wanton, uncontrollable violence and destruction, why doesn’t Banner just kill himself and save the world the headache? Banner responds with a simple, poignant mantra he lives his life by: “Hulk smashes, Banner builds.” By performing humanitarian efforts like a water purification system, Banner seeks to provide tip the scales in favor of life, of constructive rather than destructive efforts. This issue, the conclusion to the Arms Of The Octopus trilogy, follows this line of thinking in its narrative construction. We see each faction come up with logical solutions to each problem they face (it’s telling that Octavius-as-Spider-Man’s plan to “pummel” Dr. Jude “with all my strength until he falls down” is met with a striking blow to the face), with one final Hulk smash to tighten the screw and save the day.

The issue cuts between two different teams bent on figuring out Dr. Jude’s motivations and stopping him: the Superior Spider-Man and the X-Men on the ground floor, and Hank McCoy, Bruce Banner, and Molly in the lab. Many lessons are learned — they realize they must syphon and use Dr. Jude’s radioactive energy to cut him off at the source, and more touchingly, Spider-Man realizes that these X-Men are well on their to being legitimate heroes. Ultimately these two strands come to a head in a goofy climactic battle, when the Hulk smashes a container on top of Jude that converts his radioactive energy into mechanical energy? But how is that mechanical energy used?

Young hearts be free tonight / Time is on your side / Don’t let ‘em put you down, don’t let ‘em push you around / Don’t ever let them change your point of view

“Young Turks,” an appealingly poppy piece of bubblegum from Rod Stewart, is what McCoy decides to use the mechanical energy to play on a loudspeaker, as kind of a joke (At first Spider-Man decries it as “racket,” until he tries to save face about loving jokes in a bit of self-aware fun). Yet Costa’s song choice functions as more than a goofy button to this arc. Reading the chorus lyrics, it is perhaps the perfect lesson for these young X-Men in their formative years to learn. Now is the time for them, as Spider-Man details in the final images, to buckle down, stay the course, and be a hero. 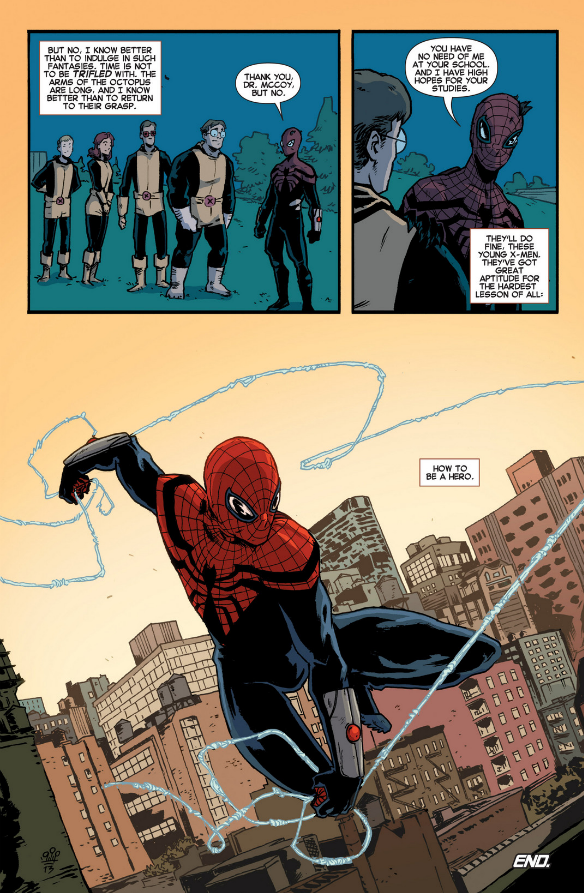 This dichotomy of jokes and seriousness are what I love the most about Costa’s writing here. In particular, this issue features a number of fun meta-jokes, including a great gag involving the probable naked reality of Banner’s come-down from the Hulk (“Let’s get some pants, then we can figure this all out”) and McCoy’s advice for finding the best clues (“You didn’t happen to find a journal around here, explaining his motives and plans, did you? Those things are very convenient”). It’s why his work feels so “real” to me, I think, even amidst the stylized superhero theatrics and blow-em-ups. As grumbly comic book guru Alan Moore put it, “My experience of life is that it is not divided up into genres; it’s a horrifying, romantic, tragic, comical, science-fiction cowboy detective novel. You know, with a bit of pornography if you’re lucky.” Because Costa’s work is funny while dealing with serious things, and serious while dealing with funny things, it feels like life. Though he doesn’t necessarily need the pornography part.

As in the previous issue, Michael Dialynas’ artwork is of the utmost clarity and immediacy, rendering no ambiguity in what’s spatially or temporally happening. In an echo of last issue’s depiction of the multiple-timelines figuring things out in the lab, consider the multiple Spider-Men attacking the Octopus Automation simultaneously, a simple yet utterly smart way to denote the passage of time. I’m also struck by Dialynas’ wonderful support of Costa’s comedic ideas. Banner’s naked reveal is absolutely sold by Molly’s blushing and looking away, and the usage of panels elevates this gag from a simple “He’s right behind me, isn’t he?” into something much more captivating. 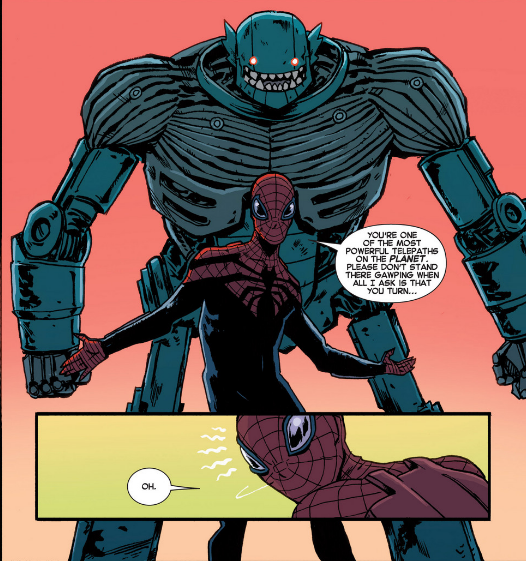 Rachelle Rosenberg’s play with color palettes also lends to this immediacy in understanding, particularly her usage of warm versus cool colors to denote whose vantage points we’re viewing the story from. These subtle signifiers are almost subconscious in the way they clarify a story, and Rosenberg is a master of the form. What do you think, Taylor? Does the clarity and humor of the story work for you? Is this a superior ending to this three-issue arc? And what other 80s bubblegum pop hits do you think would work for this story?

Taylor: I have to admit, completing my evaluation of this issue by comparing it to an 80’s pop song seemed at first kind of silly. But then I realized how steeped this issue is in time-travel and how listening to music of the past (and in particular pop music) is in some ways a method of revisiting times long gone, I quickly got on board. That being said, Huey Lewis and the News’ anthem to conformity “Hip to Be Square” makes for the perfect analogy when talking about Spider-Man, the X-Men, and the process of becoming a hero.

In the song, Lewis champions the virtue of wearing suits, getting your haircut and giving up the ways of the renegade. The point of adopting these practices, he goes on to say, is that they prevent you from living a rough and tumble life on the streets — a fate which Lewis clearly finds awful. In a similar vein, Otto Octavius is given the narration of this issue and with it he champions the virtues of becoming a hero and doing the right thing. The moments in which he chooses to reflect on this usually come as he’s also evaluating the young  X-Men’s potential to become quality hero’s themselves. Of course the dramatic irony of all this is that Otto spent most of his life as a super villain, so listening to him speak about how to be a hero should be taken with a grain of salt. Still, most of the time his advice his spot on, if not a little too generic in nature.

While Spider-Man’s willingness to teach the X-Men about the ways of Heroing is admirable, what I found more interesting is that throughout the issue he makes it clear that being a hero isn’t something you’re born into. Rather, it’s something you learn to do, like becoming an architect or painter. Again, this is kind of a generic lesson — we’ve seen it played out in countless titles and movies. However, in this case we need to consider the source from whence it came. Otto wasn’t always good. In fact, he was often times quite bad, so his speaking on the process of becoming a hero carries with it an added weight. He isn’t like Peter Parker who learned to become a hero through mistakes. Instead, his superhero know-how comes from his experiences as a scientist, educator, and supervillain. His view on what it takes to be a hero is grounded in the practical and to be honest, that’s not all that sexy. He totes the need to know your fundamentals before anything else and like Huey Lewis he places the ends above the means, even if it means looking like a dope.

This schooling by Spider-Man opens itself up to humor when, frequently, the X-Men are either incapable or unwilling to perform the feats he tasks them with. When trying to defeat the prototype of the Abomination robot, Spider-Man asks Ice Man to make a cone which he can use to knock out the mechano-man’s power source. In doing so, he gives a list of incredibly detailed instructions to Ice Man who, naturally, finds them confusing. Spider-Man’s reaction to this is entertaining.

This humor not only keeps the issue buoyant but it also reveals Otto’s character and endears us to him. The teaching of difficult concepts to the laymen is always somewhat frustrating, especially when the assumed basic knowledge one should have is not clearly established. It’s a feeling most of us know (“What?! You’ve never heard of Boba Fett?”) and this draws us closer to Otto in this instance. Otto’s later decision to take a pass on seeing Beast’s time machine also draws us closer to the character, even though the humor in this instance isn’t all that great. He entertains the idea of going back in time and altering his life so Doctor Octopus joins the Avengers instead of Spider-Man. While this would be a flashy move, he also recognizes the perils of playing with time. In a square move, he declines to see the machine, thereby ensuring his hipness as Spider-Man in the present.