Ex-Professor Kitty Pryde has accepted the open invitation to join her pal Magick at Cyclops’s New Xavier School, and the original X-Men from the past tagged along. The Young X-Men of the past meet the new Young X-Men of the present, with mixed results ranging from camaraderie to naked hostility. Meanwhile, the Young originals are sorting out their internal drama and freshly deepened love triangles. Kitty renews her friendship with Magick, and the two gather the X-Men from the past to announce a new commitment to training, in hopes of escaping the fate they saw in their older selves, the future Brotherhood of Evil Mutants. As soon as this announcement is made, Beast’s Cerebro wristwatch starts beeping, alerting them of another clash between the authorities and new mutants awakening to their powers.

Before we go any further, can I just say that Cerebro is the new iPod of the Marvel Universe? Back in my day, if you wanted to psychically track mutants across the globe, you rolled up your sleeves and you built a giant, metal, spherical room. If you wanted to use it, you had to wear a fancy hat with all kind s of wires and such, and you closed your eyes, concentrated, and got to work. Kids these days are too busy popping “Cerebro-spike” pills or projecting holographic displays from their Gameboy-sized Cerebro Walkmans to really respect the effort, sweat and blood that went into putting the thing together the first time. Bring back the sex, drugs and rock ‘n roll, at least it’ll distract the youngsters, give them something else to do before we’re buried under a pile of these Cerebro knock-offs.

Though, to be fair, sex never really left the equation, and Jean Grey is once again becoming point of contention among her male teammates. Hank’s trying to wrap his head around Jean’s kiss and subsequent decision to run away with Scott, and their argument about it is wonderful to watch.

It’s juvenile! it’s selfish! And it strikes so many notes of the way the world of love looks to a beginner. The way that a singular painful piece gets lodged in each of their brains and shuts down their ability to listen to each other feels genuine, and helps drive home the point that these people are still very young and still have a long way to go before they can begin to figure each other out. For Hank, he can’t let go of the fact that Jean was with Scott when she took off. For Jean, she’s clearly conflicted about what she feels about their current situation, much less whether or not she’s ready to make a choice about a romantic partner – not only has she learned that she’s dead in the current time, but that she did eventually choose Scott. Just like she’s not willing to believe that she’ll turn into Xorn when she’s older, neither does she want to be shoved into something with Scott just because it happened in a later/different time. “I asked you first!” – “You left with him” – “I asked YOU first!” – “And then you left with him” – the way they keep circling around each other, clinging to their own personal points of pain is just terrific writing. I can hear my own stupid self in the structure of their argument: Brian Michael Bendis does a good job of making these characters human.

At the same time, this issue is packed to the gills with hilarious dialogue. Give Bendis a little downtime away from the action, let him pair people off for private conversation, and he can’t fail to hit it out of the park. For example: fresh mutant Benjamin Deeds is minding his own business, settling down in front of the tv to catch a special on everyone’s favorite heart-throb popstar Dazzler, when along comes a young Beast followed by Magneto. True to form, Hank starts poking around in the comm system Erik has designed, and still in keeping with his characer, Hank cannot help but speak frankly when it comes to technology. In looking for a word to describe the tech efforts of the egotistical master of magnetism, Beast settles on the term “cute.”

Stuart Immonen has as much fun with the conversation as the reader does. Putting one of the world’s most superfluous mutants doing her 90s pop thing on the giant screen behind them is a great foil to the intensity of the moment. Whether by choice or by accident, I liked that the strobing lights from the screen happen to alternate between blue and purple, the signature hues of these two men. Seeing Magneto in profile rather than head-on emphasizes how hidden his face is inside that big bucket of a helmet, and it mirrors his deadpan reply to Hank’s stammering apology. Though his face is probably just as unexpressive under the helmet. Spending so much time around the high drama of the good guys seems to have changed Magneto a bit, given him a new kind of patience. It’s that or kill every one of his new loud-mouthed allies, I suppose, so he’s choosing the path of least resistance here.

Taylor! How do you do, old chap old son? Would you agree with the statement that almost every interaction in this one is a kind of nervous self-defense mechanism (Hank plays with electronics, Illyana becomes a hugger, Jean loses her shit and starts levitating)? Was it just me, or did Old Evil Scott come off a lot less jerky and stiff in this issue? Is that just because he didn’t have much time in the spotlight, or do you think he’ll start stepping up now that the youngsters from the past have joined up?

Taylor: Well, Ethan, I think Scott doesn’t have much of a choice but to act like a good guy, even if it is all just an act. Sure, he could be growing into his role as a true leader and maybe he feels ready to mentor to young mutants as well. More importantly though, he has his younger self watching his every move. Can you imagine what that would be like? We all look back at the people we used to be in high school, college, heck, even last year, and scoff at the way we conducted ourselves. But what would that dynamic look like in reverse? What if the young you could see the old you? Would college-aged Taylor think the current version is loser since he’s in bed by 11 o’clock every night? Probably. Would he maybe be a little a disappointed with how mundane his life is in many ways? Almost definitely. Old Evil Scott is probably feeling some pressure to act the part of a good X-Man in this situation given that his younger self is surely scrutinizing everything he does in an effort to either become, or not become, what his older self is.

This idea of aging and what it means to be young is really at the heart of this issue, which you already detailed quite well, Ethan. I feel like Bendis is the John Hughes of comic book writing: he writes young characters in a way that no one else really can — he just gets it. Similar to Hughes, Bendis is able to take these moments of confusion from adolescence and translate them into something that is meaningful to readers of any age, save maybe the infantile, because babies are just plain stupid. I loved the scene where Bobby pours his heart out to Eva Bell concerning all of the crazy shit he’s been through in the past couple weeks. It’s genuine and fragile and it voices the fears so many of us have when we reflect on either who we have become as adults or what we aspire to be in the future.

This scene also serves to humanize Bobby who in many respects has been little more than a jester up to this point in the narrative. We finally see that all of his joking is his way of coping with all that gnarly time travel jibber-jabber. Whereas Hank plays with gadgets, Billy cracks jokes. It’s a way of taking the edge off of his situation and the fact that he makes jokes maybe not just to be funny is a little pathetic and a little endearing all at once.

Immonen is just as good as his wordsmith counterpart when it comes to telling a story about young people who haven’t figured out the world. Ethan, you mentioned how the emotions of the X-Men are heightened due to the circumstances they find themselves in. This is true in so many ways, but in particular love, which is doing a good job of leaving heart-shaped holes in many of its victims. When Jean freaks out after hearing (eavesdropping on) the thoughts of Scott and Hank, she accidentally starts to levitate, only to realize she has no way of getting down safely. Luckily, there is an X-Man present who’s specialty is flying who comes to her rescue. Significant glances ensue. 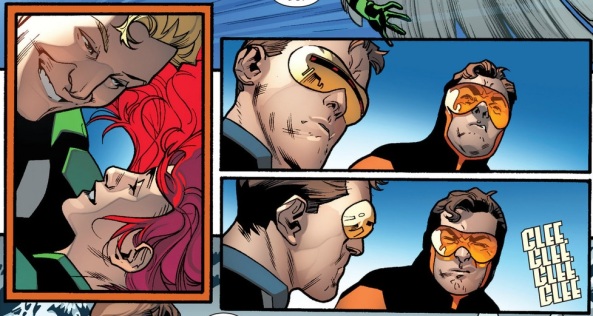 The emotions captured by Immonen on these faces in three frames is fantastic, and this even when you can’t even see the eyes of one of the characters. He does such a good job that seeds of a future love triangle (quadrangle?) are planted without a hint of dialogue or even the use of more than three frames of action. It reminds you that the art of a comic book can tell a story just as well as any dialogue can, which is something that’s, sadly, sometimes easy to forget. I also should mention I think it’s great that moments before this exchange of jealousy, Scott and Hank were pondering their chances with the other mutant ladies in OE Scott’s band. The whims of a youthful heart are fleeting at best, I suppose. This makes me more assured of my evaluation of my younger self in days past, but I still would be curious to see what past me would think of his older self. With any luck, Bendis and Immonen will give me an idea of what that would look like.