Mikyzptlk: Strife. We’ve all felt it at one point or another. It has a way of seeping into us whether we want it to or not. No matter how patient or level-headed we try to be, we all succumb to the effects of strife every now and then. Dealing with Gods of “stuff,” Brian Azzarello has been able to use his divine characters to push his story forward in a number of ways. As you might have guessed, Azzarello uses issue 25 of Wonder Woman to place a particularly heavy focus on the character of Strife and her manipulative plans. Little does she know, Azzarello and Wonder Woman may just have plans of their own.

Strife picks up a weapon from Hephaestus that she intends to use on Wonder Woman. Hephaestus finds her weapon of choice odd, as it looks like nothing more than a pin. Meanwhile, Cassandra has Milan locked in a cage that is strapped to the exterior of her own personal helicarrier, as she’s forcing him to find the First Born for her own purposes. Over in London, Wonder Woman and pals are having brunch, when Orion interrupts the proceedings by attacking Hermes, who had been spying on the gang. Surprisingly, Strife shows up to put an end to the attack, and everyone heads over to Diana’s flat. While there, the gang is interrupted once more by Siracca, who informs them of Milan’s capture. Orion immediately Boom-tube’s away, and Diana is left to hitch a ride with Hermes. Before leaving, she places Strife in charge of Zeke and Zola’s safety, leaving Zola to ask where everyone else has gone. Her response? Classic Strife:

Wait, wait, wait. Wonder Woman left Strife in charge? I certainly wouldn’t have expected that. Strife certainly can’t be trusted with the safety of Zeke, Zola, and Hera right? I mean, she’s just bound to do something terrible to them! Then again, this could very well be a clever ploy by Wonder Woman to get Strife on the side of angels. Take a look at the following image, where the wonder women are shown discussing Diana’s reaction to the betrayal of Hermes, and of his efforts to get back into the fold. 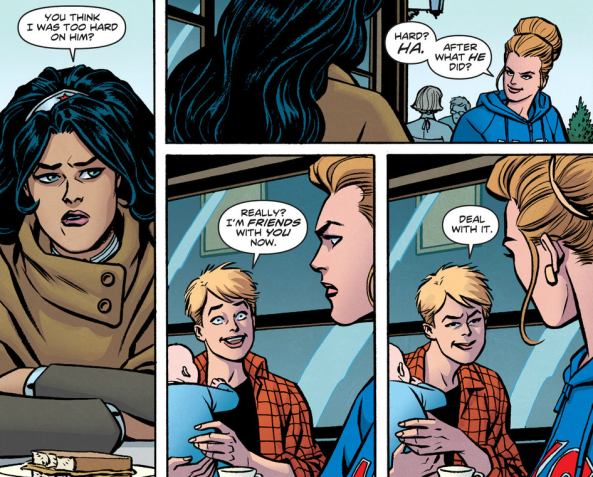 In the last issue, Hermes hit Diana pretty hard with his apt assessment of the fact that she had forgiven Hera for past misdeeds. If you saw the look on Diana’s face, then you might agree with me in my assertion that she took his words to heart. Above, we see Diana begin to question herself about her icy relationship with Hermes, but I think she’s also realized something else. She’s seen the effect that Zola and Zeke has had on Hera, and she might be trying to repeat the process with Strife.

There is one power that most superheroes have in common, and that is their power to inspire people, fictional and non. There’s just something about these colorfully-clad costumed crusaders that has an inspirational effect on people, and Wonder Woman is one of the biggest embodiments of that phenomenon. When Wonder Woman tells Strife that she is in charge, she is legitimately surprised.

Sure, Strife is about as trustworthy as Loki on a bad day, but iconography doesn’t lie right? That “?!” above Strife’s head tells me that even she didn’t see this particular development coming. Here, we see Diana, inspirational embodiment that she is, placing a sacred trust onto Strife. She is asking Strife to return the trust that has been given to her. In essence, I believe that Wonder Woman is trying to inspire Strife into goodness, and perhaps even selflessness.

This scene also allows Azzarello to toss us a bit of a reverse. This issue definitely placed a lot of focus on the machinations of Strife. From page one, we were let in on aspects of her plan. She obviously has some kind of plan involving the use of a weapon against Diana, and she is also seen giving gifts to Wondy and certain members of her supporting cast, which is also a part of her plan somehow. There is more to her plan as well, but in the end, I believe it is Wonder Woman who is trying to pull a few tricks of her own.

Drew, what did you think of this latest outing? I didn’t get into it, but there is a particularly gruesome scene involving Apollo and the First Born. It seems like Apollo has the upper hand right now, then again, he may just be using that to dig his own grave. Kindly indulge me with your thoughts, my friend.

Drew: Oh man oh man oh man. Back in September, one of our regular commenters (hi carl!) suggested that Strife was going to be a key player going forward, and it looks like he is dead on the money. She’s spent all of her time on the periphery of this series, but looking back at her appearances, it’s now clear that she’s a key force of drama in this series. That is, she is literally the bringer of drama: in much the same way war was always close behind Ares, interpersonal conflict can be found wherever Strife goes.

Think about it: her arrival on Themyscira is heralded by in-fighting amongst the Amazons (which boils over to the revelation about Diana’s true parentage once she’s actually there), her presence seems to always bring some level of disagreement to whatever group she visits, and — perhaps most importantly — her absence often allows for reconciliation. I don’t think it’s a coincidence that Strife is absent as Diana considers forgiving Hermes. The same is true of Zola and Hera, which makes me particularly interested in what will happen now that it’s just the three of them (and Zeke, but he’s just a stupid baby). I’m not sure Strife’s plan is any more devious than setting these two characters at each other’s throats, but I’m not sure it needs to be. In-fighting has long been the gods’ greatest weakness, and I fully anticipate Strife reintroducing that kind of conflict to the group Diana has spent such care cultivating.

Then again, Strife actively breaks up Hermes and Orion’s fight here. I’m sensing a longer con (hence the introduction of that pin that hasn’t turned up again just yet), and part of that may require lowering everybody’s defenses. It seems to have paid off, which is why I’m so nervous about what might happen while Diana’s away.

As for your other question, Mik: great googly moogly is that First Born scene gruesome. It’s equal parts the myth of Prometheus and Silence of the Lambs (which are actually quite similar, assuming those vultures were eating Prometheus’ liver with some fava beans and a nice chianti), with maybe the dinner scene from Texas Chainsaw Massacre thrown in for good measure. 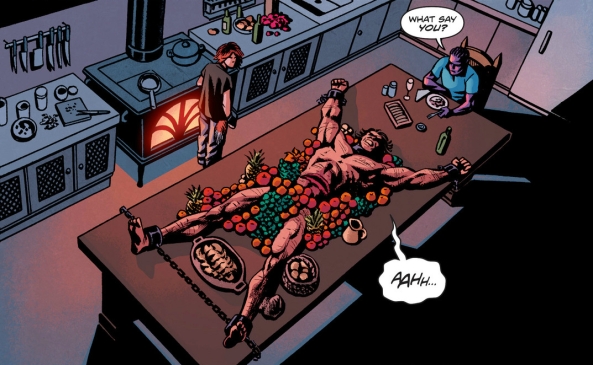 It’s dark stuff, but it’s also an appropriately mythological method of revenge. Interestingly, the ancient Greeks believed the liver to be the seat of human emotions, so Prometheus’ punishment for having too much compassion is that he lost it each day. Here, Apollo is eating the First Born’s spleen, an organ which is all-but vital — indeed, you can live quite comfortably without it — emphasizing the fact that the First Born’s primary crime is simply existing.

Of course, there seems to be plenty of folks invested in the continued existence of the First Born. We all understood that Cassandra had resources — helicopters, independantly funded expeditions to Antarctica — but armies and helicarriers? This story is somehow even bigger than the gods. Intriguingly, the First Born’s hyena-men are still working with Cassandra, even as she’s beginning to question her own interest in rescuing the First Born. We still don’t know much about what her motivations are, but she seems laser-focused on aligning herself with (or taking advantage of) the most powerful god she can find.

I really do love this series. I can’t think of another title that would send me back through 20+ issues just to see whether conflict appears when a certain character shows up (or one that would make me do so with such enthusiasm), but this series is so cohesive, so singular in its vision, I can’t help but dig for these overarching connections. Fortunately, Azzarello is equally committed to rewarding that kind of dedication. Did I mention that I love this series?

For a complete list of what we’re reading, head on over to our Pull List page.  Whenever possible, buy your comics from your local mom and pop comic bookstore.  If you want to rock digital copies, head on over to DC’s website and and download issues there.  There’s no need to pirate, right?