Shelby: There’s a very idealistic romance to being young and on your own. It’s easy for me, at the ripe old age of 29, to see younger people’s enthusiasm and just roll my eyes. I’m just jaded enough to have very little patience for that sort of thing. As Matt Fraction’s Hawkeye continues with the adventures of Hawkeye (not Hawkguy) Kate Bishop in L.A., we get a heavy dose of romance, both of the idealistic-youth type and the couple-in-love type. Is Fraction laying it on thick to crack through my jaded, exterior shell?

As much as Kate loves hanging out and doing yoga in L.A., she needs a job. You know, to buy food and shelter, stuff like that. Since hero-ing is her only marketable skill, she becomes a hero/P.I./do-gooder/light housekeeper for hire. She lands a gig hunting down the man who stole the orchids for her neighbors’ impending wedding. She’s not super good at it, getting herself kicked out of the suspect’s house and the police station. Kate finally lands a break when she is spotted taking pictures of the guy, and he hits her with his car.

The bad guy goes to jail, the neighbors get their dream wedding, everyone lives happily ever after, right? Close, except that the bad guy was actually looking for Kate the whole time, because he works for…Madame Masque!

I wasn’t kidding when I said the romance is laid on thick this issue. Kate is taking the summer to find herself, and her trip from sun salutations on the beach to plucky resolve in the face of difficulties just feels a little overwrought. Even the romance between her neighbors is a little tired. The two men wanted orchids for their wedding, because they wanted something special because they’ve waited so long for it. On the day of the wedding, one of the grooms delivers a speech about the day being more important, not the flowers, and how he would marry him anywhere any time, and that they were each other’s happily ever after. I’m a sucker for that sort of stuff, but even I think that’s a little too sappy. It feels like Fraction is trying to set up the same kind of supporting cast for Kate as Clint has back in New York, but instead of coming off as endearing it just feels forced. Even Madame Masque’s involvement is so classically villainous that it just seems corny. Those orchids that belonged to the sweet, gay couple for their special day? Well, she tore them up and floated them in her bath! SHE WANTS TO DROWN THEIR LOVE IN THE TUB, MUA HA HA!

While I find myself rolling my eyes at the comically overstated nature of the issue, I can’t help but wonder if that’s Fraction’s plan all along. I think he knows exactly what heavy tropes he’s using, and he wants us to know he knows. As Kate is dealing with the taciturn detective who wants nothing to do with her, he delivers a perfect speech:

…you think this is the start of some kind of charmingly antagonistic relationship and that I’m going to be helping you out in the future. With time you’ll find me gruff but endearing as I’ll find you spunky and aggressive but ultimately on the side of angels. Am I wrong about…literally any of that, Ms. Bishop?

The detective acknowledging the cliched nature of the story is exactly the dose of reality the story needs. My question is why tell this story in the first place? Is Fraction trying to set up Kate’s life as this sort of fairy-tale story to differentiate it from her story with Clint? His story is gritty and sad and real, while this seems like some sort of candy-colored fantasy, or like she’s in a golden age comic. The Scrappy Misadventures of Kate Bishop! Next Issue: The Melodramatic Machinations of Madame Masque! I hope Kate’s adventures in L.A. will have a meaningful impact on her and on her relationship with Clint. I appreciate that this title is about both Hawkeyes, and I like Kate having her own story, but this issue was way too sweet for my tastes. What did you think, Patrick? Did you think the story was overly-saccharine as well? What did you make of Kate’s weird P.I. guardian angel?

Patrick: Oh, heavens no: I really liked this issue. It might be a little sweet, but I read it more as optimistic – which is something that even the Clint-version of the series has in spades. I mean, come on – the whole point of Clint’s story right now is how he can (and should) draw strength from the community he’s forming in his building. Fraction’s a softy — see also FF and Sex Criminals — and this arc is no different.

Where I think this issue really shines is in Fraction’s insight into Kate’s character. She’s tenacious, and defines herself by her superhero identity. That plays into that her relationship — or her perceived relationship — with the Detective Caudle. But there’s so much more to her than that. She’s a Hawkeye, through and through, and that means she’s also way more like Clint than she’d ever let on. Check out her reaction the second Flynt makes her.

If you recall, Clint’s very first line of voiceover in this series is “Okay. This looks bad.” He’s falling out of a window at the time, but he’s relatively sure that he’ll be able to save himself somehow. It requires a kind of reckless optimism that Kate and Clint share, and maybe that’s the real spirit of Hawkeye. There’s a moment in this issue where Kate acknowledges that its been a while since she was able to shoot an arrow. Turns out there’s more to the Hawkeye franchise than shooting arrows really well.

She’s also amazingly short-sighted. The issue makes it clear over and over again that she’s sort of faking her way this whole thing. I mean, dig it: she never even gets around to posting her Hero for Hire ad. She takes the first half job that comes along, well before she has any assurances of payment. When she does sheepishly ask if they can pay her, the friendly couple calls her on nearly every word she uses. She’s comfortable with the idea of “taking” a “case,” and can’t fathom why other people wouldn’t be. When she starts to take action against Flynt, she has two plans of action, both of which are impulsive as shit, rely solely on Kate’s abilities, and fail miserably. I think we’re going to find Kate paying the price for this kind of unexamined optimism in the very near future, and it won’t be long before her life starts to resemble Clint’s.

Even her preparation is delightfully half-assed.

Incidentally, I love seeing superheroes using technology in the same ways regular people would. Kate’s not going to seek out other private investigators to ask for help – she’s going to go to Google relevant phrases until she gets frustrated and gives up.

It’s also remarkable how much Matt Hollingsworth has stepped up his game from the Annual. There’s nary a misplaced-silhouette, and he even manages to channel some of that Aja-esque stylistic detachment that made me fall in love with this series in the first place. Hollingsworth skews a little cartoonier, but he’s hit a wonderful sweet-spot where the cast appears to be distinctly comic booky. Shelby’s reference to the Gold Age is well reflected in the character design, and even in the color palette that Hollingsworth taps into. Even with those limitations, his panels are subtle and expressive. Plus, the colors suit that whole sun-light-looks-a-little-different-in-LA thing incredibly well.

[Editor’s note: Annie Wu was penciling this issue, and Julio Pulido did the annual – Hollingsworth is just the colorist common to both issues.] 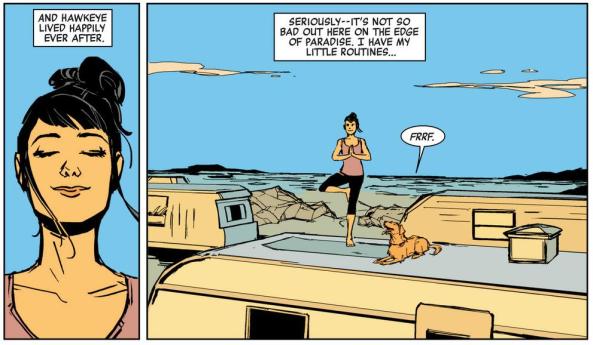 I wouldn’t mind burning through a bunch of carefree detective stories if the storytelling keeps up at this quality, but I also expect that Fraction is setting us up just to knock us down. Mark my words: this carelessness is going to cost Kate in the end.