Patrick: “The eve of battle” is an experience most of us will never literally experience – simply by virtue of the fact that so few of us will ever experience “battle.” The phenomenon, however, is immediately recognizable. People get introspective and honest and fearless the night before Something Big happens. That’s why people hook up the last day of camp, that’s why you stay up too late the night before finals watching Lord of the Rings with your friends. There’s something about the Bigness of the next day that makes every flight of fancy seem relevant. As the FF find themselves staring down the barrel of a battle royale with Doctor Doom, the Allreds chase down every impulse and curiosity, revealing a beautiful mosaic as quirky and particular as the team itself.

Okay, plot summary… both the FF and Doctor Doom prepare for their final confrontation. That’s basically it. Naturally, the juicy bits of the issue are buried away in the details. I’m sure this could easily be taken for one of those comics where “nothing happens,” but that would ignore all the excellent character work on display throughout. Lee Allred makes a very specific point of pointing out how dangerous it is to ignore these details when Kid Immortus’ observations go unheeded by Doom. Immortus notices some irregularities in the time stream, which I guess Doctor Doom has learned are always better to ignore than to address. (He refers to the observations as “time-wasting trivia.”) But each moment Immortus brings up relates to discrete branches of Lang’s plans.

So the moral of that story is not to take any of the details for granted, no matter how trivial they might appear. We don’t get all the details of Scott’s plan, but it pulls from every corner of the Marvel Universe, even going so far as to dig into the past to unearth a magician that went missing in 1942. Even that’s not quite enough: the canvass that this plan is painted on is so great that they call up another of history’s greatest military minds, Sun Tzu. And the explanation for how and why he’s there is basically identical to why Julius Cesar is there. 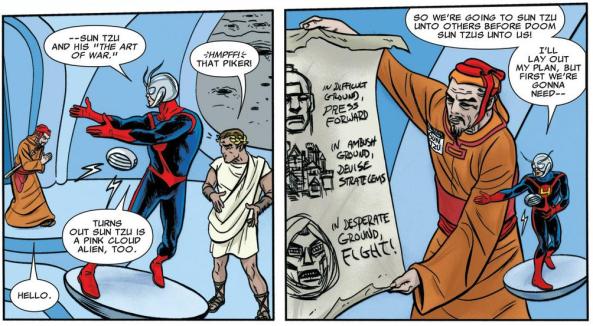 “Whatever, Sun Tzu was an alien too.” It’s classic FF, and the best part about it is that it doesn’t even matter. Cesar could have just as easily come up with this plan, but it’s much funnier to see Sun Tzu wearing a name tag.

This issue also takes care to still deliver a little lesson to the kids. When Dragonman offers up his body to be cloned for the battle effort, Scott has the kids debate the subject. It seems like Scott was never going to let them clone the guy, but even on the eve of battle, he’s willing to let the children reach this conclusion on their own. It’s a shockingly quick moment — three panels taking up less than a page — but it’s also a weirdly Socratic sequence, and maybe the only time I’ve ever seen actually education tactics depicted in this series.

I’m also starting to understand Bentley-23, as a character. There’s something just a tad too goofy about him always trying to be a villain – it can be cute and if you just accept it as truth, then it paves the way for a lot of fun character moments. But there’s a certain suspension of disbelief that comes along with that acceptance. He’s got superhero role models, and an incredible support structure, why should he want to be villainous? You can believe it, but you have to meet FF half-way. The big Bentley prank in this issue is drilling a hole in the fence to get a look at what’s going on on the women’s side of the hot springs resort. That’s a recognizably human thing to do — especially for a rebellious teenager. He’s a little pervert, but whatever: all pre-teen boys are. What’s really interesting is the reaction he gets from his classmates. 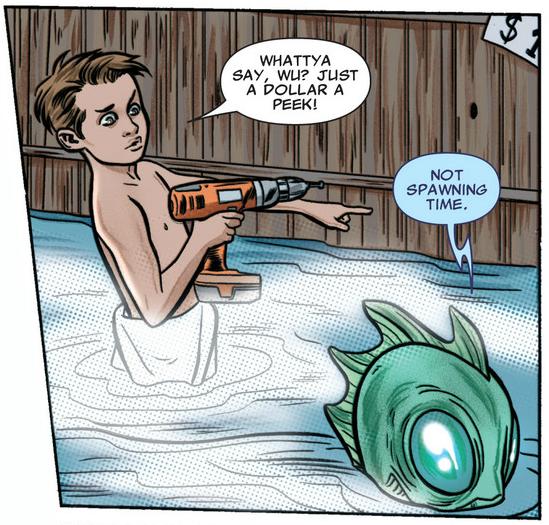 Bentley can’t even get to a place where his pranks are understood as pranks. No one takes him up on the offer: Alex is too old to find this kind of thing anything but embarrassing; Ahura wouldn’t be interested in seeing his mother naked; and Wu’s biology prevents him from giving a shit about the naked human female body. Bentley is peerless. And that’s true of just about all of these kids (except for the sibling groups, naturally), but it feels exceptionally profound when so much of Scott Lang’s strategy for the battle tomorrow hinges on robots and clones and remote controlled suits. It’s all going to come down to just how rag-tag this group of rag-tag heroes can be.

Oh and there are like a hundred details more. Ethan, I’ll just let you begin what I can only assume is your all-too-eager list of observations about this issue. Hey, that’s just the kind of issue it is. I’ll leave you with one more fun one: Matt Fraction’s face on a milk carton. 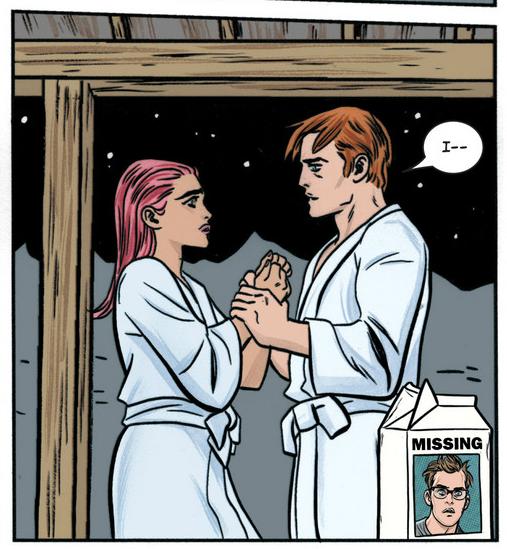 That’s a cute nod to the fact that he’s no longer writing these issues (though he is still given a story credit on the issue). The idea becomes doubly troubling when you remember that he made a cameo appearance a few issues back. I hope in-Universe Matt Fraction is okay!

(Oh, and help a body out: who all is on that Council of Dooms? The only one I get is Namor, and I don’t totally understand what he’d be doing there… Come to think of it, I’m not totally sure what the Council of Dooms is…)

Ethan: Oh man, that Doom Council was a bit left-field, wasn’t it? As far as I can tell, it’s a splinter cell of Dooms from the Parliament of Doom, or from the OTHER big bunch of alternate-universe Dooms that showed up in Fantastic Four Vol. 4 #9, OR a mash-up of the two. Or maybe those two groups are the same thing? Either way, the foursome we run into this episode seem to be other-reality versions of Namor, Doctor Strange, Loki, and… not sure about the last one who all separately took up the mantle of Doom. The fourth kinda bore a passing resemblance to Ant-Man, which would be neat for irony’s sake, but it’s harder to tell. The only concrete bit of information I know of is that once, a Victor Von Doom was Sorceror Supreme on Earth-938 (which, granted, isn’t the same thing as actually being Stephen Strange).

And those guys only took up one page of this issue. While the issue was about preparation instead of a bad-guy brawl, wow was it PACKED with wonderful little moments. The Sun Tzu bodysnatcher cameo and non-attempt at justifying his presence was definitely one of my favs – I love how, looking at the panel you include, you can see how he helpfully annotated different parts of the plan with lines from the “Nine Situations” chapter of his own bestseller. It’s a nice touch I didn’t catch until the second time through. There are too many fun snippets throughout to mention them all – it felt like the Allreds have just pulled out all the stops, ditched all the filters, locked all of the Marvel execs in a closet somewhere and are just here to have a hilariously good time. Little things like Old Johnny Storm’s sense of smell (apparently he can now smell Doom AND death on ya), to the fact that Bentley’s choice to use an electric power drill while standing waist-deep in water, to the shot of Caesar and Sun Tzu standing together in the background on the surface of the moon (apparently they’ve kissed and made up). It’s a fabric of insane, carefree fun that just weaves FF together, and as it goes even more crazily off the rails than ever, it just works.

As much as I’d love to document each of these quirky bits, on a more serious note this issue saw a lot of development for Scott. Right off the bat on page 1, we get a quick glimpse of that persistent, monochrome tree that’s come to symbolize the place in Scott’s head where he’s keeping alive the intense sense of loss over the death of his daughter.

It’s surrounded by scenes of the kids having their group chat with Alex, and it’s accompanied by Scott’s internal monologue about how he never wants to let another child die. You can read it as his love and determination for the Future Foundation is gradually helping him move past his guilt and pain, or you can read it as his melancholy being a constant presence, even in the company of so much love and family. Either way, it’s still THERE, haunting him.

Later, we see him putting his feet up after all of the frantic preparation to take down Doom, browsing through Uatu’s archives, and the images he’s contemplating share a common theme: Ant-Man’s past. And if you know Ant-Man, you know that the name doesn’t exactly come with a lot of warm fuzzies. 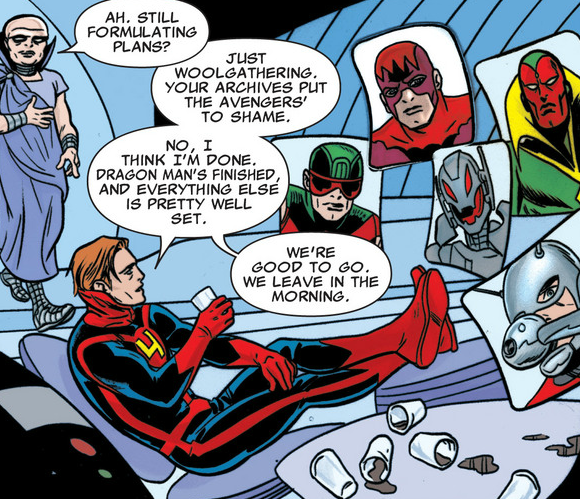 We see the original Ant-Man in his extra-silly gear, and we’re reminded of the deep character flaws of Scott’s predecessor, Hank Pym. Then there’s Ultron, the super-intelligent, super-mean AI that Pym designed and built, and which recently pretty much killed the universe. We also get a portait of Vision – child of Ultron, and initially also an enemy of Pym. While Scott’s staring at these pictures, he’s also managed to fill the table next to him with empty glasses of what I’m guessing is booze. Honestly, what he’s doing here seems like the superhero equivalent of sitting at the computer in the middle of the night scrolling through the Facebook profile of your ex-girlfriends. Failure, what-ifs, memories of joy and sadness and error and anger. Doesn’t take a psychiatrist to tell you that what Scott’s doing here is probably really unhealthy.

Finally, in the middle of what might have been a tender moment between Scott and Darla, he makes a confession to her about killing a cellmate back when he was in prison. 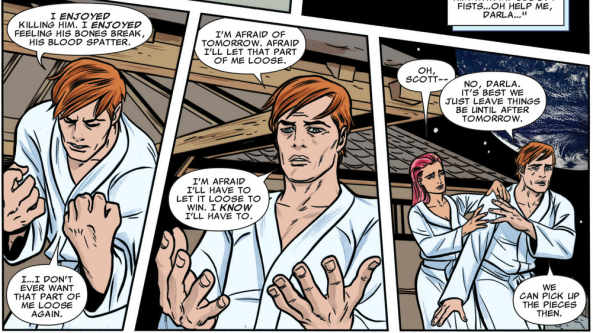 Ok, I did not see that coming. To me, that sounds like the sort of thing Wolverine says. The muscle-bound, hairy, slit-eyed, feral, predator guy, not the bumbling substitute teacher working through inferiority issues. Maybe the kill moved him that way because he struggles with feeling helpless – helpless to save Cassie, helpless to redeem the Ant-Man persona. Maybe I’m reading too much into it. Either way, I didn’t expect to hear him saying that murder made him euphoric. It’s a much more active sort of darkness to his character versus the passive depression he’s wrestled with so far. I don’t know where it’s headed, but it brings a new twist to the character and the series.