Spencer: First issues are hard to pull off well. They have to be as exciting as possible to ensure that readers come back for issue two, yet they also have to somehow find space to establish a whole new world/concept/set of characters and make sure the readers aren’t lost; if those two goals sound completely incompatible, well, they often are. Matt Fraction’s task in Inhumanity 1 is made even more difficult by the Inhumans’ long and complicated history. Fraction goes out of his way to make sure we understand everything we could ever possibly need to know about the Inhumans in this issue, but unfortunately, it leaves little room for actual story—or excitement.

Things open up with a charming prologue:

I absolutely love this opening. The phrasing feels right out of a fairy tale, which seems appropriate for the Inhumans somehow. There’s also the implication that we could be Inhuman—one of the many unwitting Inhumans scattered across the planet—which is an ingenious way to invite the reader into the story. I took that invitation and followed the story to a confrontation between the Avengers and Karnak, an Inhuman with the ability to detect flaws who is inadvertently causing chaos throughout the city. Thanks to Hawkeye (he’s as surprised as the rest of us) they take him down and bring him in for questioning.

Just let me pause for a second and say that, by this point, I was hooked.  Fraction handles the Avengers with a humorous touch, and the contrast between Hawkeye and Karnak as Clint questions him is charming in its own right.

From here, though, the entire tone of the issue changes. Karnak describes the history of the Inhumans, starting with their very inception thousands of years ago, when some Neanderthals were abducted by Kree scientists and genetically altered. The Inhumans eventually united, but some smaller groups broke off as time went by. Fast-forward to the present: Black Bolt, King of the Inhumans, and his brother, Maximus the Mad, are faced with the might of Thanos, the Mad Titan, who demands a tribute made up of all the Inhumans’ young. In a desperate bid to evolve and survive, Bolt destroys Attilian and unleashes a wave of Terrigon Mist across the world, causing every human with even a hint of Inhuman DNA to begin metamorphosing.

It’s a lot of exposition. A lot. It should also sound familiar, as most of these events just took place over the last few months in Jonathan Hickman’s Infinity. As I mentioned in the outset of this article, Fraction has a difficult task with this first issue; both the Inhumans and their current status quo are complicated to explain, but there had to be a better way. As someone who just put out who-knows-how-many-dollars reading Infinity, I was a bit miffed to throw down another $3.99 for a book that spends 75% of its time summarizing that event. For the record, I’m not saying that there isn’t some fun to be found in these scenes; watching Karnak piece these events together on the fly is interesting, but there’s only so much I can take of him “uncovering” motives and events that I already know before the fun’s over.

Oddly enough, even the book itself seems to realize how long this scene drags on. When Karnak begins his tale only Hawkeye is in the room, but as he speaks, other characters come and go, joining and leaving the conversation mostly off-panel; it feels like we’re in some sort of fever dream, but it’s also a really clever way to depict just how much of a drag this conversation is. Of course, I don’t think that’s what Fraction had in mind, but I appreciated it nonetheless.

Even this plot point created some problems, though. First of all, the entire Illuminati show up at Karnak’s cell together; is it just me, or is there something off about that? I really don’t think this top-secret group would be making public appearances, no matter how pertinent the Inhumans’ fate is to them. Medusa and Mr. Fantastic also appear in-panel together, which is even more jarring considering that Medusa is currently a part of the FF because Reed is supposed to be lost in space; addled or not, Medusa would’ve noticed that.

Anyway, eventually Karnak finishes his story, but before he and Medusa can decide where to go from there, Karnak stops in shock. He sees “the fault in all things, the fatal line running through Inhuman destiny”—and shows us a vision of grand threats to come—and hurls himself through the window to his death.

Again, Karnak’s methods are fascinating—cutting through unbreakable Wakandian glass with his fingernail!—but it’s a lot of telling and no showing, and without context, I have no idea what to make of his vision. Ultimately, what I learned from Karnak’s story is that the Inhumans are scattered, leaderless, and unsure of their new position in the world. Thing is, I knew that before I even picked this issue up. That’s not a story, that’s a blurb, a thesis statement; for $3.99, I expect more.

I’m definitely disappointed. I was looking forward to Inhumanity—both Hickman and Fraction have done a lot to interest me in the Inhumans recently, and Fraction especially appeared to be having a blast with them over in FF, but this issue shows very little of Fraction’s typical humor or charm or nuance. (And you can’t tell me there weren’t opportunities for a little more levity in this issue: 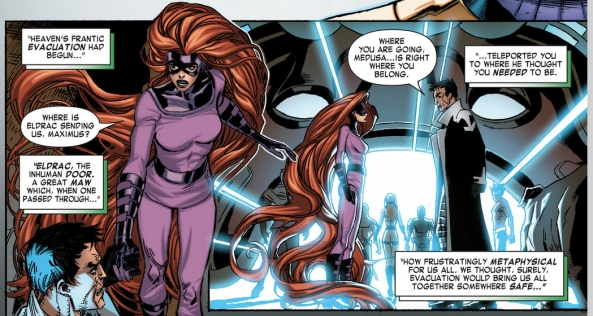 The Inhumans teleport via a giant head’s gaping mouth—if you can’t make that funny, you’re dead.)

Ultimately, this is just a first issue, and I’m sure there’s plenty of time for Inhumanity to find its feet. I still think it’s got a lot of potential, but if the goal of a first issue is to excite readers and draw them in, then I think it fell short. Patrick, how did this first issue fare for you? Did you find anything buried beneath all that exposition to latch onto?

Patrick: Not particularly. This issue has the stink of “event” all over it. And prologues plague these kinds of things all the time. This is clearly an orientation pamphlet – with annotations for those of us that aren’t reading FF, Fantastic Four, Infinity, Avengers and New Avengers. Spencer, you and I have basically read all of that, and relatively recently at that, so there’s virtually no value for us here. But I think it’s important to remember that this isn’t the first issue of a new series – it’s a one-off that’s kicking off an event. I only put the pieces together after I saw the “Continued in Inhumanity: Medusa #1″ at the end of this issue. I was about to fly off the damned handle: I mini-series within events are so frustrating to me. It just feels like a cash-in. (Sorry Infinity: The Heist and Infinity: The Hunt – I’m just not interested.)

But that’s really not what’s happening. Medusa is also a one-off. And while there is a mini-series with Inhumanity, called The Awakening, it’s a scant two-issues long. It seems that the real story will be in the pages of Inhumans – due out mid-January. If this issue serves to get all of this exposition out of the way, then maybe it’s okay. Mind you, it’s still a slog, and more than my four bucks, I’m disappointed that I spent 15 minutes reading information that I could have gotten from my own conversations about the Inhumans. It’s like that first issue of Justice League of America – you remember: most of that issue was just talking about how cool it was going to be to have all these characters in a room together. Looking back on that write-up, I was pretty grumpy then too.

Okay, so what we’re left with is an extended history lesson – some of the history is incredibly recent, and some of it is ancient. Interestingly, both pieces of history are given about equal weight. Marvel’s touting this story as one that changes the status quo, so it’s appropriate that we’d be reaching way back to cavemen, but there’s so much of the modern-day stuff that’s still shrouded in mystery. How much did Black Bolt know going into this plan? How much did the rest of the Inhumans know? Is Maximus loyal to his brother or really gunning for the throne. Those are mostly character questions, and there’s just not any room for that in History Class.

History Class sure does have some neat iconography. I don’t know what they mean, but there’s a set of symbols all over this issue.

Are they Kree symbols? Maybe the banners represent different camps of Inhumans? There’s one that jumps out immediately – the forked road. It’s the symbol on Black Bolt’s fucking forehead, and it’s also the sign that Karnak draws on the glass before throwing himself to his death. He says “Behold. The Forking Path. What was one united now divides and…” At this point, he has a prophetic vision. It’s been a good long time since we broke down a good prophecy, but let’s make not of the return of some of these symbols in the vision.

Blah, blah, blah, yes some of the same aliens we were fighting alongside in Infinity appear to be fucking shit up in the near future. Whatever: I’m interested in those banners. No idea what it means, or what it will mean, but I expect those kinds of tiny visual mysteries to pay off down the road. It’s just like when Geoff Johns used to lease new lantern colors and symbols before revealing what he was working on months later. When we look back on this issue (if we look back on this issue), those signs will mean something, we just don’t have any context for them yet.

Actually, the cover of this issue achieves this kind of effect in miniature. Coipel’s cover appears to be Karnak busting through some glass, presumably to kick some ass. Come the end of the issue, we realize that he’s blown out the glass so he can kill himself. The context changes the meaning of the image. If the only point of this issue was to train our eyes to look for the signs that we don’t yet understand, then I say fair play.