Patrick: There’s no single person or institution that’s introduced me to more media than The Simpsons. I didn’t know that it was happening at the time, but my 10 year old mind was being educated in the works of Alfred Hitchcock, Rod Serling, Francis Ford Copola, Stanley Kubric, Martin Scorsesse, Tennessee Williams, and on and on. But the film that seems to have cropped up the most was Citizen Kane. I can’t possibly convey what my first experience of watching Citizen Kane was like: by that point in my life, I’d seen the same scenes and camera angles and transitions and themes and characters reconstituted a hundred different ways on The Simpsons. It was invigorating and shocking to see everything in its original context, granting new meaning to my favorite old Simpsons episodes, but also imbuing Citizen Kane with a kind of pre-loaded meaning. Deadpool has never shied away from referential humor, but writers Gerry Duggan and Brian Posehn and artist Scott Koblish narrow their focus in the third inventory issue, and convinces us that Jack Kirby’s work is the Citizen Kane of comic books.

Deadpool and Cable, dressed as 1950’s Los Angeles gangsters, appear in Wakanda, 1968, where they mention that they almost killed Hilter. Let’s pause just a second: Deadpool and Cable — characters invented in the 1991 and 1990, respectively — start the story with jamming in quick references to the 40s, 50s and 60s. That level of wackiness is our baseline. Deadpool, abandoned by Cable, decides to enjoy his Wakandan Vacation, but that’s all interrupted by a) monsters that want to fight and b) a quest to collect four cosmic puzzle pieces from throughout the universe. This quest is issued by Uatu, the Watcher and The Ruler of Earth, a kind of gigantic Speak & Spell. Deadpool’s journey takes him all over the world, where he encounters a host of colorful characters before assembling all the pieces and accidentally destroying the moon. Oops. Odin’s more than happy to right this situation, but then sentences Deadpool to the worst place imaginable: the 90s.

I glossed over much of the incident in this issue, but only because it’s dense as hell. Duggan and Posehn are tapping into an ultra-compressed style of visual storytelling. I mean, come on: Deadpool gets the assignment to collect four things, and accomplishes that task in the same issue. Hell, we even see him getting each piece. None of these accomplishments are particularly strenuous for Deadpool, but it all serves as a tour of the Jack Kirbiest universe imaginable.

I made a quick list of characters and concept that appear in this issue invented (or co-invented) by Jack Kirby: it’s basically everything but Deadpool and Cable. Uatu, Mangog, The Thing, The Savage Land, Odin, Wakanda, The Negative Zone, Fin Fang Foom, the Stone-headed men on Easter Island. Even Mangog’s dumb little space scooter thing looks like it’s straight out of Orion’s garage.

The late sixties coloring style is absolutely magical. Val Staples pulls out all the stops to emulate the ocean of bright, improbable colors that Kirby was so damned fond of. There’s even the infamous Kirby Krackle just about everywhere — those dots that surround… well just about anything “powerful.” I wonder if that’s a Staples addition or if Scott Koblish took the pains to draw them all in there. It’s such a specific technique, and not a totally intuitive one, at that. The prevelenace of those dots make the pages a little darker and heavier than they would be otherwise – which is sort of at odds with the quick tone of the piece. Or it would be, if we weren’t elbow-deep in a pile of homage. My favorite use of the Krackle is when Koblish appropriates it for something so uniquely Deadpool: the baby Watcher’s magic swirl of shit.

That’s a near perfect synthesis of Deadpool-isms and Kirby-isms. Nice work, guys.

It’s a super-packed game of spot-the-reference, one that I’m all too certain that I’m mostly failing. Maybe that’s on me — I did just suggest that I failed at a game, like it’s a test or something. This has become a common thing for me: trying to make Deadpool mean something, when it might just be that the creators are having a good time. Greg, I have no idea what your experience is with 60s and 70s Kirby comics. I think it’s fair to assume that — like all those episodes of The Simpsons — you didn’t know what exactly was being referenced, but you were able to recognize the sheer enthusiasm behind those references. So, what say you? Did this hyper-homage work for you?

Greg: Patrick, the moment you began your look at this issue with an admission of learning much of pop culture via The Simpsons, I knew we would be on the same page. Your analysis of my understanding of the Kirby references — didn’t quite know them, didn’t quite need to know them, still appreciated them — is spot on, yet I was still able to appreciate and unpack the sheer density of this issue, both on a narrative and content level, and yes, the many, many references from all over damn pop culture history.

It feels obvious that Duggan and Posehn are cultural sponges, absorbing everything from everywhere, which is both completely copacetic to Deadpool’s fourth-wall breaking point of view, and part and parcel of why this bananas issue is so jam-packed. By my count, there are throwaway references to the Beastie Boys, Jeff Dunham, Jim Belushi, J.R.R. Tolkien. It’s a beautifully postmodern collapsing of cultural time and space, a destruction of any distinctions between low and high. Since the character, the authors, and (hopefully) the readers have access to and experienced “everything”, everything is fair game, everything is fuel for a joke. It’s embedded in the narrative DNA of this issue; collect five puzzle pieces in five different worlds? Feels like every video game structure to me.

Yet like The Simpsons, the issue isn’t just stuffed with references. On a comedy writing level, the amount of jokes not just per page, but just per panel, are jaw-dropping. Reminiscent of any sign one ever sees in an average Simpsons episode, Duggan and Posehn take any and all opportunities for a joke. Let’s unpack this panel right quick: 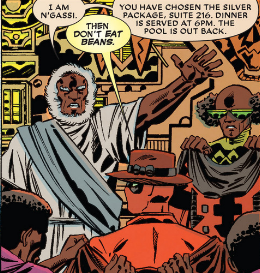 First, the obvious yet sublime N’Gassi/don’t eat beans wordplay. Second, the usage of contemporary hotel jargon (silver package, suite 216, pool out back) in what is obviously, third, a stereotypically “savage” seeming exotic locale. It’s rare to laugh three times in a row, just from reading left to right in one panel, and this issue delivers the goods.

It’s not as fun just to make fun, however, and thank goodness for the out and out joy, craft, and care the two writers and flippin’ brilliant artists Koblish and Staples threw into this thing. For all the fourth-wall breaking, this never once feels ironically detached or removed. Even a throwaway gag involving teenage dinosaurs hits its punchline not with authorial snickering at the ludicrousness of the premise, but rather a 110% emotional investment into the premise.

Much like my experiences as a kid watching The Simpsons, Deadpool 20 feels like a grand journey into several cultural worlds, all at once, and it’s all a blast.