Patrick: I like starting off an article off with a little epigram. It’s a fun, pithy way to get things jump-started, and usually it makes me look smarter than I actually am. Young Avengers has always had romance running through its veins, but the final issue of the Mother Parasite arc focuses in love — its power, its uncertainty, its sheer insanity. I thought to myself “oh, I’m got the perfect quote to kick off this piece,” but in attempting to access a beautiful, articulate saying about love, I was subjected to a deluge of insightful comments, heart-breaking one-liners, and hopeful true-isms. It turns out that we are all obsessed with love, and we all want to be in the mix for saying the most beautiful thing ever about it. Kieron Gillen has put his characters through the paces, and across countless nightmare worlds, and in the end, it’s love that keeps all of reality from collapsing.

While the extended Young Avengers cast defends the earth-side portal from Mother’s minions, the core team battles the Guild of Jilted Lovers in Mother’s dimension. It’s tough for everyone — turns out that it’s emotionally taxing to fight people you used to love (especially when you still sorta love them, right Noh-Varr?). But Loki, who has been behind most/all of this, realizes he’s putting his friends through some unnecessary hardship, and calls off the Jilted Lovers (which might have just been apparitions summoned by Loki all the while anyway). Unencumbered, our heroes rescue Teddy and send him up to convince Billy that he’s worthy of the power of the Demiurge. Power of love, etc.: Billy reshapes reality without Mother in it.

Reality warpers are so weird, man. Wiccan is so powerful he essentially has authorial control over their world, but is beholden only to an audience of himself. Gillen might be able to write whatever he wants (pending editorial approval, of course), but he’s subject to his readers’ appetite for continuity and logic. The Demiurge has no such restrictions, so it’s catastrophic when Billy is unsure of himself or feels under-valued in any way. I have always had a cynical view toward the relationships in Young Avengers — I guess I just remember the transition from high school to college too well to place too much stock in any teenage relationship. It’s a matter of perspective, you know what I mean? The trick to Young Avenger‘s success is that Billy doesn’t have that perspective, but he does have the ability to un-make reality, so even those petty squabbles between teenage lovers become objectively important.

Plus, Prodigy makes a really interesting point in this issue that has be second-guessing my out-of-hand dismissal of the romantic relationships in this series.

That’s love. I place more value of mature, thoughtful love, but that doesn’t make the teenage variety feel any less real in the moment.

And boy howdy, does Billy need to feel some real love. I alluded to his authorial power earlier, but Jamie McKelvie has no time for such pussyfootery. McKelvie masterfully eases us into making Billy the hand of the creator, so by the time Wiccan is literally browsing his own comic, it doesn’t feel like meta-wankery coming out of left field. First, there’s the very simple way that mother’s dimension is nothing but white negative space — literally a blank page. When Billy eventually decides to take control, he fills the page with his own body and manhandles the panels, willing Mother right out of existence. And then there’s the magic moment of reviewing his adventures exactly was we viewed them. 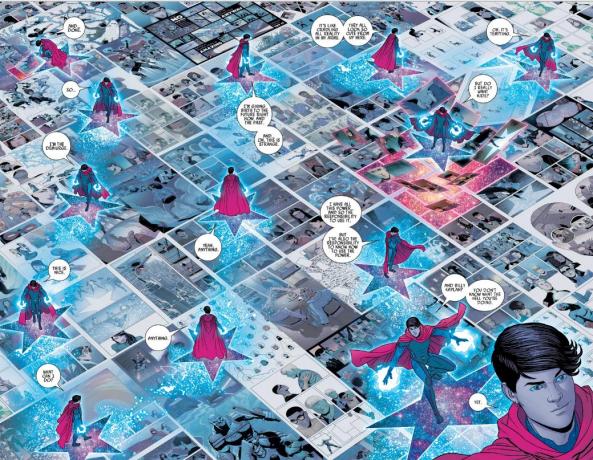 I’m a sucker for seeing comic pages repurposed for just about any reason, but as a look back on his own reality — which is, after all, a god damn comic book — I absolutely love it.

There are a lot of other finds of love on display in this issue, and most of them are a lot messier than Billy and Teddy’s. Noh-Varr and Kate have a bit of an unresolved hiccup when Marvel Boy admits that he never stopped loving an ex. Prodigy confesses that all he really wanted was to know what love felt like. And then there’s Loki… hey, I’ll confess to not totally grasping what the deal is there. All that I can really say for certain is that Loki was positioned to get what he wanted but gave it all up because he loves his friends.

Spencer, I find Loki to be one of the bigger question marks of this issue — not just because I don’t understand what version of his consciousness is in control of what version of his body, but because any version of Loki seems to be motivated by power; but only up to a point. What is that threshold that turns Loki from an absolute bastard to a sweetie? Do you buy it? Or is it weirdly convenient eleventh hour recanting?

Spencer: Those are all good questions, Patrick. I plan to get a little more into what exactly is going on with old/new Loki in the comments—because it’s long—but to answer your other question, yeah, I do buy that Loki’s heart grew ten sizes; still, it’s important to remember that Loki is a trickster god, so even when he seemingly lays everything bare, he may still have an ulterior motive.

I buy into Loki’s emotions here, though, because the guilt he feels is obviously genuine. Whether he can be held accountable for Kid Loki’s death or not, our Loki still feels guilty about it, which is why his guilty conscience took on the form of Kid Loki and has been haunting him throughout this run. Leah and the Guild are the same: projections born out of the repressed guilt Loki feels over what he did to the real Leah and the lies he’s told to the Young Avengers. The Guild (or League or whatever) is tangible proof of the guilt he feels, and they’re what forces him to admit his guilt the only way they possibly could: by threatening to take away something he wants.

That’s where ulterior motives come in. Loki feels guilt, and his confession saves his friends, his life, and even the world, but that’s just it. Loki has been after Billy’s power as the Demiurge this entire time, and if Billy dies, or if the world ends, then Loki doesn’t get what he wants. Do I believe that Loki feels bad? Definitely. But I also believe that he would have never confessed had his hand not been forced. It was a last resort.

Anyway, let’s get back to the power of love! I’m not surprised that it’s the key to everything: Gillen loves to play with these kind of abstract ideas and metaphors, and there isn’t one out there more appropriate for a band of teenagers than the power of love. It’s like America says:

Patrick, your take on teenage romances is interesting — and I’m inclined to agree with you — but I think adults sometimes dismiss how important and powerful young love can be just because we know it isn’t the same kind of love you have an adult. Being in love as a teenager so rarely lasts, but it has a power and intensity that’s nearly unparalleled, so I’m not surprised that it’s what gives Billy the power to become the Demiurge.

That same kind of intense passion can be just as destructive, though; ask Romeo and Juliet, or perhaps you could just ask Noh-Varr.

Noh knows that Oubliette is no good, that she’s objectively a villain and perhaps even that he should want to be with Kate, but there’s this crush he just can’t get rid of.  Billy and Teddy’s love is their greatest strength, but Noh-Varr’s love for Oubliette is his greatest weakness, and it’s also probably much closer to the kind of teenage relationships many of us are familiar with; who hasn’t nursed a crush on someone who ended up being a terrible person? Learning when to let go is important; the power of love can move mountains, but there are still things it can’t do (Scott Pilgrim, for example, argued that the power of Self Respect is even more magnificent, but that’s a matter for a different essay).

Romance isn’t the only issue relevant to young adults being thrown around this book, though.

When you’re a teenager, it often feels like you can do anything, doesn’t it? It can feel like you’re invincible, like you’re always the smartest person in the room, but growing up means realizing that you don’t really know anything yet. Billy’s realization here is a nice contrast to the first issue, where his meddling in alternate dimensions — albeit with the best of intentions — released the Mother parasite in the first place. Now he has even more power, but he’s also learned enough about himself to know that he’s not ready for it yet. It’s quite possibly the most adult decision he’s ever made.

Now Mother’s off the table, but there’s still the issue of the Patri-not and just what he’s done with Speed. He plays an interesting role in this issue, largely functioning as a comedic foil to Prodigy.

It’s a surprising use of such a menacing character, but it absolutely works. It also led me to reexamine what the Patri-not actually does in this issue and even revisit his debut, and besides for whatever he did to Speed, he’s actually been a surprisingly non-violent opponent. He never fought back against Prodigy in this issue, never really fought the Young Avengers when they were dimension-hopping — he simply led them on a merry chase—and even when he first confronts David, he simply tries to get him to put on the Patriot costume. I think that, whatever he is, the Patri-not is trying to show the Young Avengers something, teach them something; maybe he even thinks he’s helping them.

I just hope we get enough time to adequately resolve his plot line in these next two issues, especially since they largely seem designed to serve as an epilogue. And man, epilogue…I still can’t believe this run is coming to an end. I’m heartbroken, but I suppose the adult thing to do would be to enjoy these last two issues, then cherish everything I loved about this run, not sob like a little baby and wander around in an anguished haze for weeks. Yeah, that’s what I’ll do.