Scott: I like failure. Wait, I should clarify that a little; I like it when superheroes fail. It sucks for them, sure, but at least it’s exciting. When you read a lot of comics, you get used to seeing the heroes being, well, heroic. It’s nice to see one screw the pooch once in a while. So I can’t think of a better place for us to dive into Brian Buccellato’s The Black Bat. You see, The Black Bat just messed up real bad. I’m talking scores-of-people-are-now-dead-because-of-him bad. It’s a tough situation for anyone to rebound from, but if this issue teaches us one thing, it’s that Black Bat bounces back from failure with a vengeance. And if it teaches us a second thing, it’s that Buccellato isn’t afraid to move through plot points quickly. A little too quickly, I’d go so far to say.

Before I get into this issue, allow me to briefly recap some major points from the series’ first six issues: Tony Quinn, A.K.A. The Black Bat, has been searching for a group of kidnapped cops. Meanwhile, rumors of a briefcase bomb- linked to mobster Oliver Snate- have kept the city’s cops on their toes. Last issue, Tony rescued the kidnapped cops and, upon learning the bomb was at the courthouse, evacuated everyone inside. Unfortunately, the bomb was actually just outside the courthouse, and detonated as soon as the building was cleared.

So that brings us to Black Bat 7. In the aftermath of the courthouse bombing- which killed nearly 200 people- Tony is overcome with guilt and refuses to speak to anyone. The police are pinning the explosion on Black Bat, and Snate is happy to let him take the credit. Tony’s advisor, Carol, has been fired for her part in the fiasco, but is able to convince Tony to go after Snate one more time. They head to a shooting range, where Tony quickly makes his way through Snate bodyguards. He finds Snate and holds him at gunpoint. All along, Tony has made it clear that he’s not a killer. Is he willing to make an exception?

I’m not sure I’d qualify this as a cliffhanger. Gun to my head (pun very intended), I guess I would. We’ll have to check back next issue to see what really happens between Tony and Snate, but the way Tony’s character has been built up, I’d be plenty surprised if he suddenly put a bullet through Snate’s brain. In fact, I’m surprised already, by the fact that Tony got his hands on Snate in the first place. Tony’s been after Snate since issue #1 and hasn’t gotten close. This issue, he decides to go after Snate again, and has him at his feet a mere four pages later. It’s a shockingly fast sequence of events that involves hardly any conversation. I couldn’t believe how quickly Tony got to Snate. It took me out of my element a little, to be honest. But Tony just couldn’t be denied after getting a much needed pep talk from Carol.

Ronan Colquit uses these checkerboard layouts at several points throughout the issue, with alternating panels of all-black with white dialogue and images of characters. It’s a clever way to put the reader in the shoes of a blind main character. But over the course of the issue it seems to devolve from a useful narrative device to purely stylistic choice. It makes sense to me that Tony’s world would be black at the beginning of the issue, when he’s distraught and unresponsive. He is still able to see through his eye implants, but I see the black panels as representative of his mental state- his mind is blank and he’s choosing not to see. I can’t figure out what the black panels mean near the end of the issue, when Tony has his gun fixed on Snate. Clearly he is alert and active at this moment, using both his mind and his eyes. Is he blinded by anger?

Colquit uses another method for putting us inside Tony’s head- one that I greatly prefer to the black panels. Any time we get an infrared image from Tony’s perspective, I absolutely love it. There’s only one such panel in this issue, during Tony’s epic rampage through the shooting range.

Taylor, what are your thoughts on this issue? It definitely isn’t my favorite of the series so far- it just feels a little thin, like it gets from point A to point B too quickly. That said, I really like where this series is headed. There are great plot threads developing all over the place. I especially like conflict among the rescued officers, who are being asked to blame the bombing on the man who saved their lives. One of them will clear Black Bat’s name though, right? And what’s up with the outfit Carol wears throughout the issue. Seriously, her boobs are like 20 percent covered. Is it possible she was just fired for violating the dress code?

Taylor: Yeah, that was a little distracting. Part of the reason this issue kept me on the edge of my seat was that I was afraid we would be subjected to an awkward “blind guy doesn’t see nudity” gag. It’s a truly puzzling wardrobe choice by all accounts.

Another, more legitimate reason I was on the edge of my seat during this issue is for the reasons you mentioned Scott. In the span of about 20 pages we go from the direct aftermath of the courthouse bombing to Tony’s best impression of an avenging angel. It’s a quick turnaround for anyone who supposedly is suffering mental break from a traumatic event. 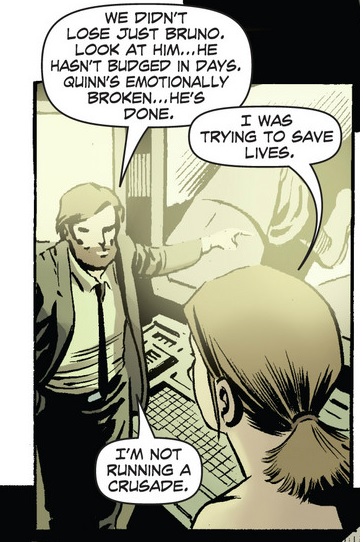 What makes Tony’s recovery so shocking is just how fast it occurs. The Dark Night Rises broods on the subject of rebuilding a superhero for nearly two and a half hours and various other superhero stories have spent entire arcs on broken heroes finding their feet again. I’m not making a value judgment on how long such a story should be, but it does say something about its place in superhero lore. The story of a broken superhero is powerful because it speaks to us in a personal way. We all know failure, so when we see a hero struggle we empathize. Seeing Tony broken, and rebuilt so soon is jarring because we don’t really get to see him in the pits. He sits on the floor for a bit but then he’s back to kicking ass and in the end that’s harder to connect with emotionally.

Despite this recovery, the issue really had me hooked from the opening page. I loved the opening wide panel of the city and the gradual zooming in to the chaos of the recently devastated courthouse. This set the tone and the pace of the issue almost immediately, both which were its defining characteristics when I read through its pages. When Black Bat rips off his costume the reader instantly knows that this won’t be an issue heavy on action or other heroing business. Rather it’s about the aftermath of a tragic event and the failure of a hero.

Knowing that, one would expect a meditative issue, which is exactly what we get for the first two thirds of the issue. Then the story telling mechanics start to whir into motion and all of sudden Black Bat is in the middle of a gun fight and basically kicking all sorts of ass. However, there is a logical and rhythmic ramping up to to this action. Carol’s firing and eventual tipping off of Snate’s whereabouts to Tony serve to make the quick nature of his turnaround believable, even if it does seem a little quick. Perhaps Tony is just filled with such rage he can’t contain it, which leads to rash decision to maybe kill Snate. We’ll see about that next month I suppose.

On a side note, I would just like to say how much I like the very idea of this comic being made. One of my favorite episodes of the Batman Animated Series growing up was “Beware the Gray Ghost.” In it, Batman meets the man who played his childhood hero, The Gray Ghost. The episode serves an homage to Batman’s pulpy roots and is a love letter to hero’s of days past. This series reminds me so much of that episode and I love the feeling of nostalgia tinged with reinvention. This series is worth reading if for no other reason than just that.