Shelby: With family dramas like Lazarus, it seems to always come down to loyalty. With family, a certain amount of loyalty is assumed; they’re your family, you have to be loyal to that. Greg Rucka really tests that with the Carlyles; the first issues are rife with schemes and betrayal. Poor Forever is stuck with the task of not only remaining loyal to the back-stabbingest family, but also not really having a choice as the family’s Lazarus. Despite her unwavering facade, there’s that tiny seed of doubt planted by the anonymous message that she’s not actually a part of the family. If blood ties are the driving force behind her loyalty, what’s she to do if those ties don’t even exist?

The whole issue is a series of little vignettes showing daily life for Forever and a family of Waste. The first is a glimpse at Forever’s childhood, when she’s maybe 10 years old. Her father goes to visit her for the first time in five months, but when she can’t best her teacher in combat she is deemed not ready to claim the family sword, and maybe not good enough to ever claim it. The heartbreak on her tiny face as she disappoints her father is, well, heartbreaking. 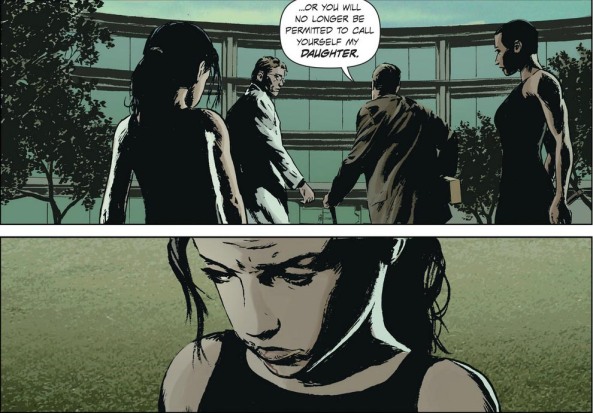 It seems that Forever’s first loyalty has always been to her father, not the family. It’s him she’s worried about disappointing, not the rest of the crew. We jump to Forever apologizing to the daughter of the man executed as a traitor a couple issues back. I love the conflicting layers of loyalty Rucka introduces in the scene; Forever executed the man because he confessed to betraying the family in order to save the rest of the workers at the facility. Forever had to do it to remain loyal to the family, but she apologizes/offers condolences to his daughter to honor his loyalty to his own family and coworkers. Maybe: she’s not entirely sure what she’s trying to say. Forever is conflicted, she did what she did because it was right for the family, but it was actually the wrong thing to do.

I think my favorite story is the one of the Waste farmers trying to save their home from rising flood waters. They have submitted all the proper paperwork, so they request an assist from the family for sandbags. Despite paying the family for their protection, they can’t get help for a couple days yet. The whole scene reeks of bureaucratic nonsense. Naturally, the waters come in and destroy everything. Michael Lark depicts the senselessness of the whole situation perfectly in three panels. 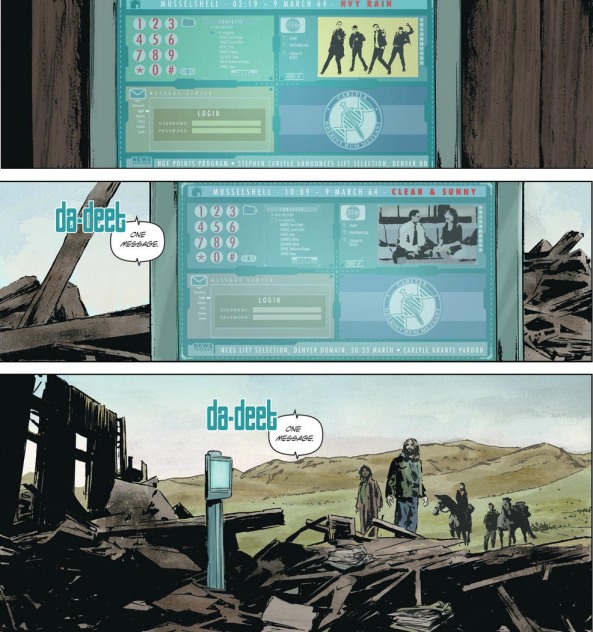 The irony of having the message from the family be the only thing to survive is a little funny, and completely awful. The pan out from the screen to show the devastation is incredible, but it was the details of the books that really caught my eye and tugged at my heart. When the family was planning to head to higher ground, the husband Joe was bemoaning the risk to their large collection of books. His wife Bobbie made a point of saying she cleared the bottom two shelves on the bookcase. Their house is in ruins, but it was seeing the books scattered in the wreckage that really drove the point home for me. She did what she could, she cleared the bottom two shelves.

Thinking on loyalty again, Rucka shows here that, in this world, loyalty is a one-way street. The Waste have to be loyal to the families, much like Forever has to be. The big difference is, while Forever expects a modicum of loyalty in return, the Waste expect to get nothing. Their loyalty will go unrewarded when they need it most. It raises the question: what’s the point of being loyal? If the Family demands loyalty from the Waste, what do they get in return for that loyalty? That’s where the Lift comes in. As explained on the title page, the Lift is the period when the Family has a chance to elevate members of the Waste to service. So the people stuck in poverty are forced to remain loyal to their ruling Family for a shot in the dark at being promoted to forced loyalty that is rewarded. It’s a tense and depressing dynamic, and I love it; Rucka is building an awesome, terrible world. What about you, Drew? Were you as intrigued as I am by the recurring thread of loyalty in this issue?

Drew: I think the most intriguing thing about it is “loyalty” is the best word we have for it, even though it’s functionally not a choice. The Carlyle’s reach makes it so they effectively have a monopoly on all the decisions made within its realm, whatever the outcome. Heck, that reach extends beyond Carlyle territory — the specter of all-out War with Carlyle (or at least the threat of battle against a Lazarus) convinces the Bittner-Hock men to turn on one of their own.

That’s cold. Greg Rucka recently teased this issue by revealing the insignia of the “Dagger” team that accompanies Forever here. Their motto — geldius in aeternum — appropriately translates to “cold forever.”

Ultimately, though, I don’t see loyalty so much as utter hopelessness. The Barret’s signed a contract with Carlyle for help in exactly these kinds of situations (though we don’t really know what NOT signing that contract would have looked like), but it’s not like there was an alternative. The Barret’s didn’t turn to Carlyle because they trusted them (indeed, Bobbie knows that they’ll only come if they see a profit in it), but because they had no other option. The Waste may take care of each other in Musselshell, but that’s because nobody else is going to.

I’m reminded of my own recent struggles with Comcast over my internet connection, right down to the “sympathetic” rep who promises too little help way too late. That kind of red tape between people and vital services is often pointed at when criticizing the government, but Rucka demonstrates that it’s not any better if we simply let capitalism run amok.

Forever’s “loyalty” is similarly not quite loyalty, in that it isn’t really a choice. She was both genetically engineered and raised to be loyal to a fault, but that also required her to trust to a fault. That anonymous email is the first chink in that trust, and the loyalty may come crumbling after.

Even Johanna is trading on that faux loyalty. Malcolm suspects her of betrayal, but Forever suggests that simply acting loyal fervently enough may convince him otherwise. Only, she was always good at acting loyal. Perhaps that’s what passes for loyalty in the world of Malcolm Carlyle, but it scares the hell out of me.

It’s interesting, Shelby, I totally agree that this issue is all about loyalty, only there isn’t a scrap of it to be found anywhere. The seeds of distrust are planted too deep in this world, they can even corrupt the Lazarus made specifically to have a blind spot as far as distrusting the family goes. I can’t think of a better word for everyone’s fealty to Carlyle, but it certainly isn’t “loyalty.” Here’s hoping we can come up with something in the comments.