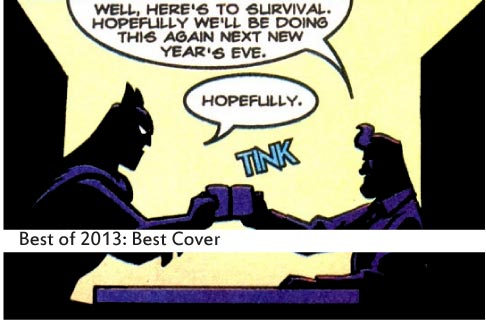 You know you shouldn’t judge a book by its cover, but that doesn’t mean you can’t judge the cover on its own merit. Some covers are so excellent that they back all the drama, excitement and emotion of the whole issue into one succinct image. Sometimes they end up being their own surreal experience. And other times, we’re just exciting to see our favorite heroes kicking ass one more time. These are our top 13 covers of 2013.

The shadow of New Genesis loomed large over the second year of Wonder Woman, and our only window to that world being the cocksure Orion, the planet had one hell of a first impression to make. Cliff Chiang throws his impression of their entire society right on the cover, opting for a graphic with limited color palette that calls to mind soviet propaganda posters. The issue itself finds Azzarello slowly doling out details about the various cracks in New Genesis’ sterling facade, but thanks to Chiang’s striking cover, we’re already there.

J. H. Williams III on Sandman is already a dream come true. There are no two names in comics as synonymous with beautiful ephemera as those two, and Williams seems hell-bent on leaving his sublime mark on Dream from before the story even starts. The scene depicted on the cover is an appealing jumble of images from the issue, with the framing device of the dreaming carnivorous flower creeping up around our hero’s legs. The promise is trippy adventure, but Williams’ craft also assures the reader that none of that surreal imagery will be squandered on nonsense.

Oh, geez. We lost a lot of superheroes’ young sons in February, and while Batman and Robin got all the press, poor Buddy Baker was going through the same thing. Jae Lee — master of drawing characters head-on — shows Animal Man in a moment of unguarded torment, with no bells, no whistles. The darkness is so oppressive that it starts to creep in over Buddy’s feet, and any body part too far back to be properly lit by this impossibly dramatic spotlight. Buddy’s baroque red Animal Man tattoos persist — a constant reminder that his loss is also his own fault. Plus, come on, you can’t put a shirt on Animal Man: everybody knows that. 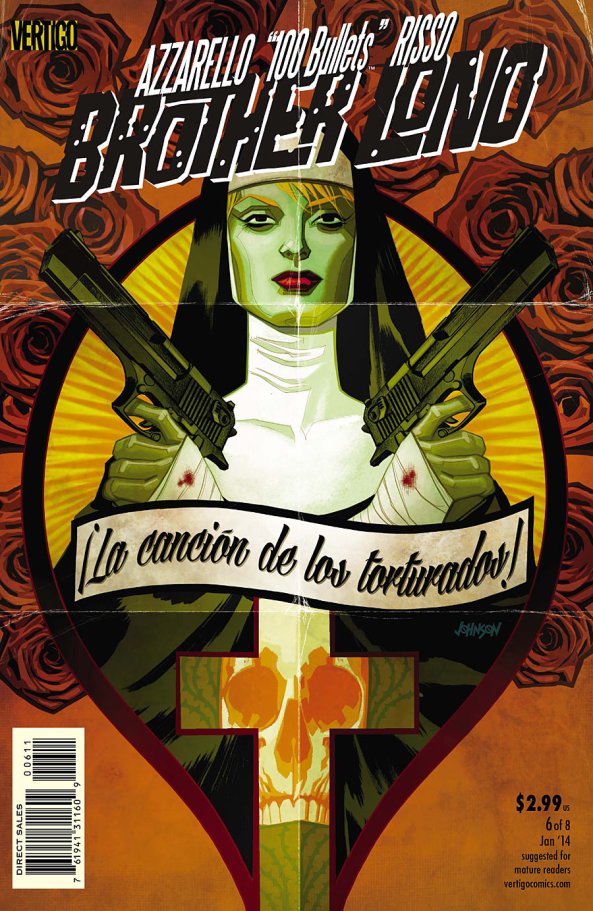 It takes a lot for a single image to stand up to the sheer volume of symbols at play in Brother Lono, but Dave Johnson — who also served as cover artist on 100 Bullets — is more than up to the task. Here, he crafts a masterfully dense image around Sister June, a “nun” we’ve already learned is actually an undercover DEA agent. That contrast allows him to find the line between Catholic and violent imagery, crafting a bitingly ironic hybrid of spirituality and pulp. It’s a dense image, but one that only whets the palate for the issue that follows. 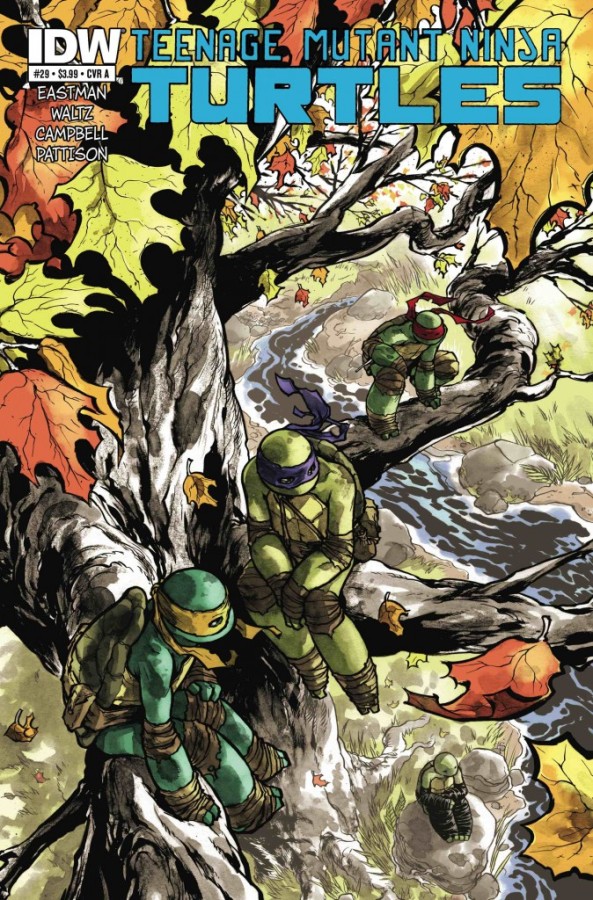 Sophie Campbell did the art for a handful of the TMNT microseries issues in the past, but issue 29 marks her first foray into drawing the main series. Her story arc is the tried and true Northampton story, where the Turtles sit quietly and lick their wounds. They’re recovering from the Mateus Santoluoco-drawn City Fall arc. We are well-documented as loving Santoluoco’s art, but Campbell brings a more vulnerable look to the series and this beautifully watercolored cover wears that vulnerability like like a badge of honor.

We might have had a hard time articulating what actually happened in this issue, but we all agreed that the look of this series is absolutely spellbinding. The cover to the second issue borrows all of the young series’ visual motifs and swirls them into one epic hero shot. The camera is low, stalking through the unnaturally purple grass, and seemingly peering through plants that look as much like butterfly wings as they do like fox ears. Death stands in the middle, wreathed in a cool orange sky, a vulture slumped lifelessly over her shoulder. It’s an unbelievably loaded set of images, almost so much so that it’s impossible to tease a concise meaning out of it, but that’s Pretty Deadly for you. 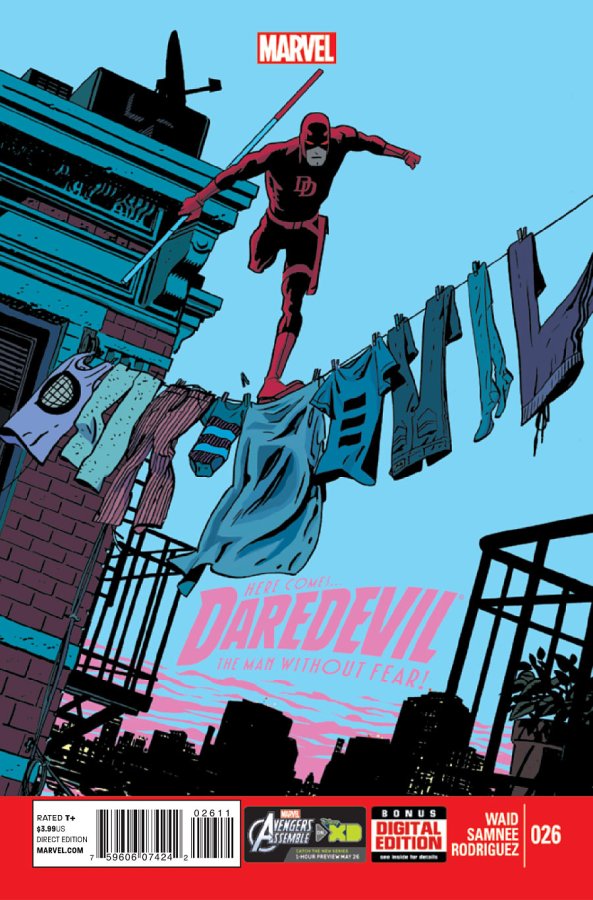 This one’s deceptive. At its surface, it looks like a pretty normal Samnee drawing of Daredevil doing something Daredevil does all the time. It is that — and the way the buildings are slanted to the right while Matt stands upright enforces some key themes of Daredevil losing control of the city — but the extra magic is in the clothes on the line. They spell out “Daredevil” in such a subtle way that you basically won’t notice it until some smart-ass points it out to you. 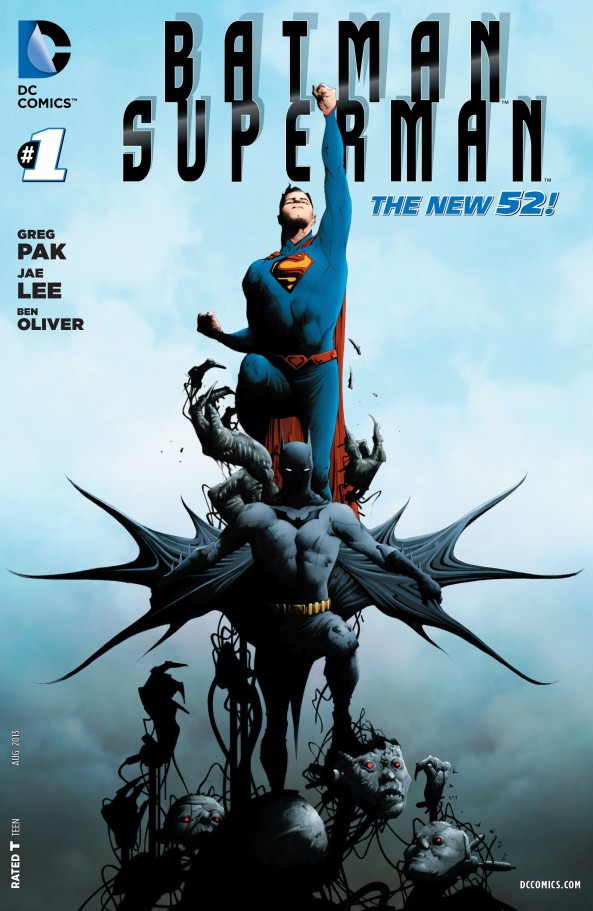 Hey look, it’s Jae Lee drawing characters head-on again! If it ain’t broke, right? There’s a lumpy  symmetry to this cover, which is made even lumpier by Superman’s single fist in the air. In fact, Batman appears to be the most stable part of this image, suggesting that both Clark and the threats from Apokalips are throwing him off his game. Also, while we grew tired of his over-use of shadow by the end of issue 3, depicting Bruce’s face in shadow and Clark’s face in direct sunlight sets up another fundamental difference between the characters.

David Aja’s style is defined by graphic simplicity, but his covers take that approach to another level, delivering a clever distillation of this issue’s themes. It’s sexy, it’s violent, even the distressing of the cover reflects the vintage comics inside that turn out to be a major plot point. It’s an attractive, clever cover (it’s not lost on us that there are eight casings on the ground — corresponding to the issue number), perfectly symbolizing — and priming us for — the issue it precedes.

Jeff Lemire is using Trillium as his canvas for exploring the the physical medium of comic books, and nothing makes a bolder statement than giving the first issue two separate, simultaneous front covers. Whether you read Nika’s side or William’s side first, you’re teased with an image that refuses to accept any one reality as principal to the other. 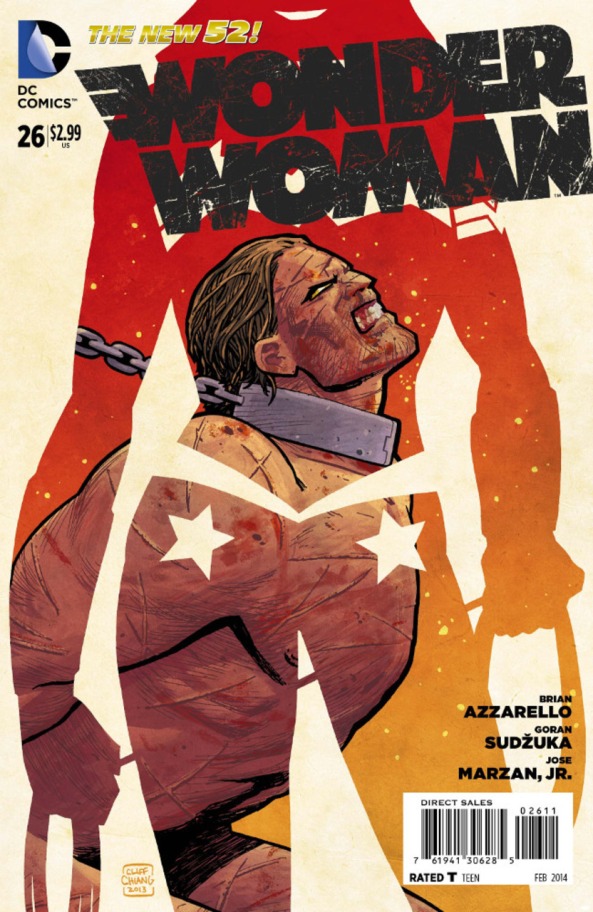 Cliff Chiang’s cover for the most recent Wonder Woman is stunning — it’s easily the most designy cover we’ve seen for this series. But it also manages to convey the similarity between the strengths of Wonder Woman and the First Born. Where they differ is in their pointedly temporary relationship with bondage — the First Born is chained around his neck, and profoundly unfree. Wonder Woman, meanwhile, holds her magic lasso in both hands. It’s a powerful image, if not totally reflective of what’s happening in the issue (she’s not keeping First Born, Apollo is), but the chain crossing her right arm and the parallel between the neck brace and Wonder Woman’s (largely obscured) choker might also suggest that Diana’s not a free as she thinks. 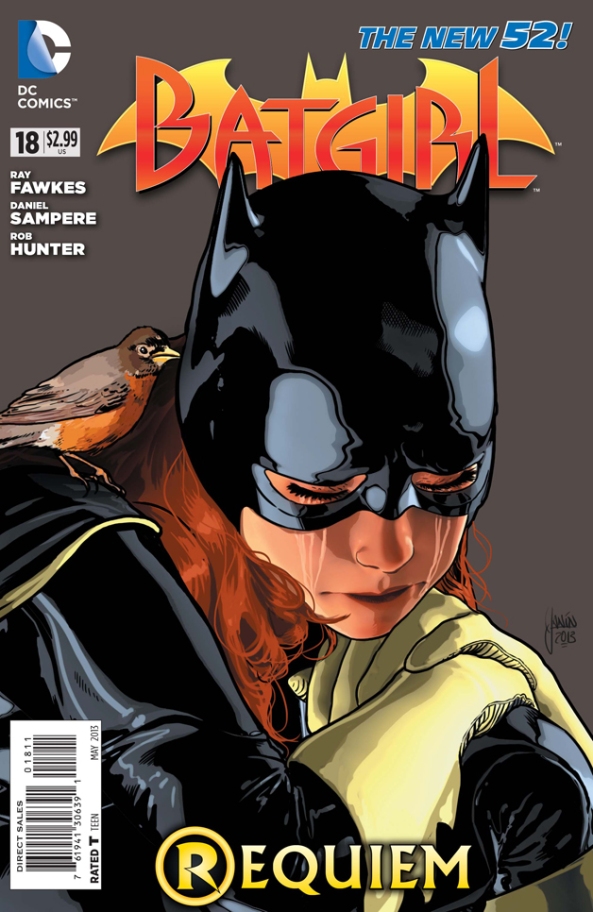 There were a handful of issues that suddenly popped up with these surprise-sad covers, and most of them used that maybe-too-on-the-nose robin as a symbol for…well: Robin. Mikel Janin keeps this drawing incredibly simple by reigning in the extremity of Babs’ emotions. She’s clearly devestated, but she’s just taking a minute to process the loss. We’re so close to Barbara that every detail needs to be rendered in loving detail: the grip on her gloves, the way hair falls around her face, even the slight red ring around her closed eyes. The issue itself refused to acknowledge the emotional reality of Damian dying (Batgirl had other things to worry about), but after this cover, what more do you need?

If any cover this year displayed how well a series understood its relationship with its own fans, it’s Hawkeye 9. David Aja co-opts the iconic  “I [heart] NY” t-shirt and adds all the best graphic flourishes: an arrow through the heart, and a more different arrow pointing up from the H in Hawkeye. Thousands of fans said in unison “I want that shirt.” Putting Kate Bishop in the shirt just furthers our love affair with the character. Plus, Kate just looks so fucking cool in high contrast.

The best covers distil the mood of the issue into a single image, but a few manage to do so for an entire series. Clever, graphic, and emotionally charged, this cover is a perfect match not only for the issue it precedes, but for The Flash as a whole. It helps that the cover art team — Francis Manapul and Brian Buccellato —  are also the series writers, but the simple clarity of this cover stands in stark contrast to the dense subtext that has defined their run.