Patrick: Did y’all see Crazy Heart? Part of that movie hinges on the fact that Jeff Bridges’ character quietly and gradually writes a song so good that he can retire on it. I love imagining the moment in the script where the screenwriter must have written: “Then he writes the best song ever” and then goes back to describing a bar bathroom or something. Luckily, the people tasked with actually demonstrating this skill were up to the task. Geoff Johns has a habit of writing himself into similar corners, but always leaves it to himself to bail himself out. The result is an oddly self-contradictory narrative, one that comes so very close to acknowledging its own absurdity before doubling down on it.

Batman brings Catwoman back to the Batcave to retrieve his fail-safes against the Justice League (for use against the Crime Syndicate – Bats doesn’t need to kill the Justice League again). They’re a mix of definitely-useful, maybe-useful and boxes unopened and/or empty. The pieces Batman is most interested in are a yellow ring he’s got left over from Blackest Night and a non-functioning Mother Box. The tech required to bring it on-line is at Wayne Enterprises, and everyone’s surprised when Batman and Catwoman run into Lex Luthor, Bizarro (now calling himself “Bizarro”), Black Manta, Black Adam and Captain Cold also stealing stuff from Wayne Enterprises. Before they can start punching each other, Power Ring appears on the scene with some hired goons in tow.

And that’s when things really get wacky. Batman — the man who’s evidently got a plan to take out everyone — attempts to wield the yellow power of fear against Power Ring. Now, never mind that Bats has been solicited, and subsequently rejected by, a Sinestro Corps ring in the past, the yellow ring is a totally inefficient weapon against a Green Lantern. I mean, it’s fine if you know how to use it, but it’s certainly not a fail safe. Batman seems to be functioning on a weird pre-Geoff Johns understanding of how Green Lantern works, which is all the more baffling because this story is written by Johns himself.

Further confusing things, the issue ends with Sinestro appearing, decked out in his possessed-by-Parallax outfit. It’s a cool image – especially for those of us that enjoyed Johns’ run on GL – but it also doesn’t make shit-for-sense. 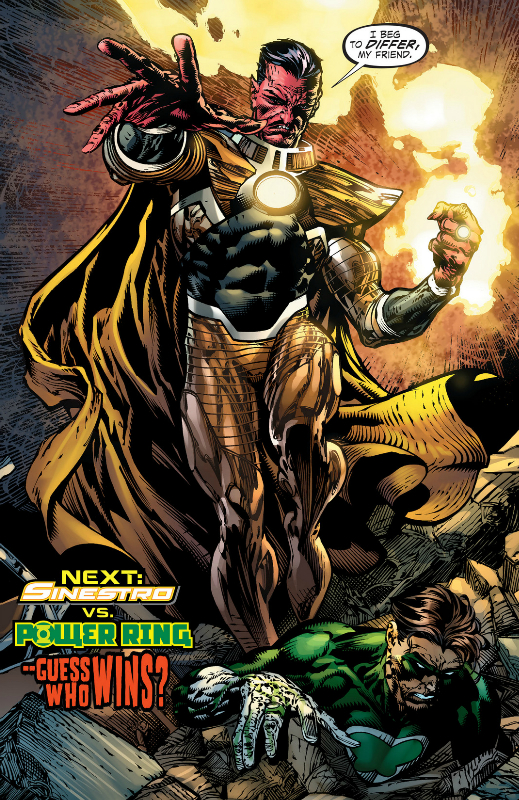 Johns had the final word on Sinestro six months ago. This is a petty complaint, but it seems like we’re only meant to enjoy this event on a plotting level, and when the plotting doesn’t add up, it’s hard to stay excited about… well, any of it, frankly.

Mostly, what bugs me about this issue is that the whole thing is an excuse to put the characters into new teams, and then putting all the teams in situations where they can punch each other. It’s a classic case of “superheroes fight first and ask questions later” – behavior hardly becoming of Batman, Owlman and Lex Luthor. They share the same goal: stop the Crime Syndicate. It’s a little wearying to watch them overcome the same central misunderstanding, especially when the goal is so fucking obvious. It’s not like there’s anything even half-way redeeming about Ultraman, let’s just team up and find a way to take him down already.

Fortunately, a lot of the smaller details come together to instill a little heart into this issue. There are quick moments with both Bizarro and Metallo that pay off their Villain Month issues. The Metallo payoff is considerably sadder: a man wronged gets his Kryptonite Heart ripped out for basically no reason. Meanwhile, Luthor’s showing signs that he’s emotionally invested in his failed Superman clone. It’s a brilliant move to give Bizarro a quality so childlike as fear of the dark (can’t use e-ray vision to effectively see in the dark?) – it’s just the right amount of goofy for a dude with a backwards S on his chest. Artist David Finch even manages an impressive piece of acting in this scene, as Luthor is horrified, half by his confession and half by the fact that he’s delivering it to a botched experiment.

I’d actually argue that Finch is on the top of his game throughout this issue. I don’t love his extra-line-happy style – it shares all of the negative qualities of Jim Lee’s work without any of that Lee charm. I really like his big-screen drawing of Power Ring freaking the fuck out. I still don’t totally understand how that character works, but Finch is finally able to sell me on how that character feels, which is pretty close. 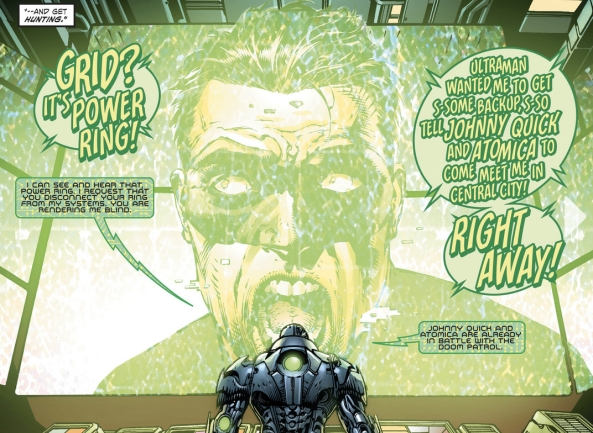 Plus, the lettering on this page is insane. Letterer Bob Leigh rocks all the right special speech balloons throughout the issue, but the image above is a special case. We’ve never seen lettering so erratic in this series, but it fits the tone of Finch’s drawing perfectly.

So, Spencer, I guess I’m of two minds about this issue. On the one hand, it’s charming in many small ways, but the larger logical inconsistencies — coupled with the inevitable grimness (or grim inevitability, take your pick) of the story is starting to wear on me. Are you digging it? And how far along do you think Owlman will get in recruiting an army of rebels before he just merges with Batman and Luthor?

Spencer: I can at least understand Owlman being more reluctant to join with Bats, since Owlman presumably still wants some control over the planet after defeating his teammates, but I suppose it still will happen sooner rather than later. Your line about a grim inevitability is right, Patrick, and that’s my main takeaway from this issue: it spends its time teasing and table-setting events we already know are coming.

Think about how much of this issue is spent introducing the weapons Batman wants to use to take down the Crime Syndicate, reintroducing the team of protagonist villains, and filling Ultraman in on the treachery of his subordinates. All of these points are clearly introduced for resolution down the line, which is good, but we’re halfway through this series and still setting up plot threads and moving pieces across the board. I hate to bring up my own expectations, but it feels like more should have happened in this story by now.

For the rest of the issue, I feel like Johns is running on the rule of “cool”: Oh, wouldn’t it be cool if Sinestro showed up at the last second?! Wouldn’t it be cool if Ultraman just ripped Metallo’s heart out?! Wouldn’t it be cool if Batman used a power ring?! Yes, it is cool, I won’t even try to deny getting a little giddy once or twice over the space of this issue, but all these events largely come across as mere spectacle—coolness for coolness’ sake—than anything substantial.

It’s not like this issue doesn’t have a lot to offer. Patrick already pointed out some real heart in the exchange between Lex and Bizarro, as well as the strength in the artwork and lettering. I was fond of the opening interaction between Batman and Catwoman as well; it’s probably milks the idea that Selina wants to get closer to Batman too much, but Bruce’s guilt over Nightwing’s fate is touching. 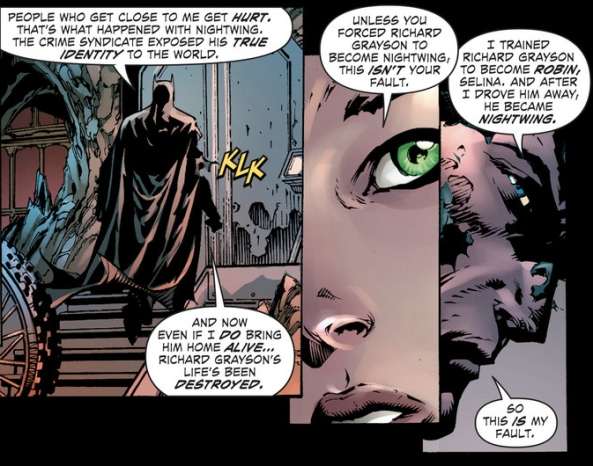 Likewise, as I’ve mentioned before, the absolute absurdity of the Crime Syndicate makes for some genuine chuckles, even if they weren’t for the right reasons: 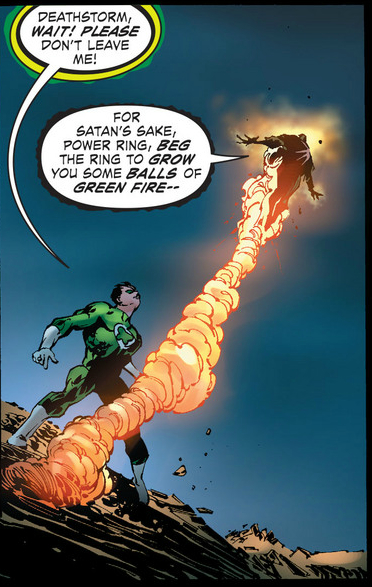 I’m not laughing because Deathstorm’s line is funny, I’m laughing because it’s ridiculous, but I’ve come to a Stockholm Syndrome-esque kind of relationship with this aspect of the Crime Syndicate’s portrayal, and would probably miss it if they were toned down.