The comics industry might have trained us incorrectly. We’re meant to gobble up as much story as possible, as quickly as possible. That way we buy more comics, and Batman and Spider-Man can continue to punch dudes into perpetuity. But the books we read are far from disposable — they contain some truly astounding artwork from some of the most talented storytellers out there. They’re our directors, our actors, our choreographers, our set and costume designers. These are our top 13 artists of 2013.

Samnee has been sharing the storytelling credit on Daredevil with Mark Waid for years, and even when he’s not actually drawing the issue, his fingerprints are all over it. His action is stellar, clear and just shadowy enough to evoke the character’s classic darkness without wallowing in it. Samnee’s greatest strength is his ability to express Matt Murdock’s non-visual senses in a purely visual medium. This year saw Daredevil confronting the source of all his trouble over the last three years, and Samnee’s urgent action drove the story right to an incredible conclusion.

Young Avengers gets a lot of credit for Kieron Gillen’s sharp, witty dialogue, but McKelvie’s the real star of the show. As the rag-tag team of teenage superheroes tumbled through alternate versions of reality, McKelvie mastered the thankless task of rendering some of the most abstract ideas on the page — including a world that appeared to be made of rough drafts of comic book pages. Never content to merely tell an impossible story well, McKelvie injects at least one show-stopping spread into each issue — something that expands what the medium is capable of, like this awesome schematic fight sequence.

FF has been a tonal anomaly — a goofy series that basks in its Bronze Age nuttiness while remaining stubbornly honest about its characters. Allred brings that “gee whiz!” honesty in spades. Plus, he manages the unwieldy task of corralling an enormous cast, imbuing even the physically identical characters with distinct personalities. It’s light and happy and never loses sight of what’s fun about this absurd situation. Over at DC, his covers for Batman ’66 have captured the intended tone of the series even better than the stories within. Allred brings a rare infectious enthusiasm to every page.

I love the idea of Francesco Francavilla as a sort of hired gun that editors bring in when a series needs an extra dose of ’70s horror. All of his work is incredibly stylized, and feels suitable for just about any story, so long as it’s prepared to take a darker turn. When Hawkeye began its discursive exploration of the events leading up to Grills’ death, the first player under scrutiny was the killer himself, whose story is masterfully rendered in Francavilla’s gritty grindhouse style. It’s a signal that — while we’re still having fun — shit is getting real.

This year of Wonder Woman has all lead to Diana reluctantly taking on the mantle of God of War — a conclusion as unlikely as it is impossible to avoid. Diana is a peaceful, loving character that will not hesitate to level her enemies when her friends are threatened. That’s a duality wonderfully encompassed by Chiang’s art, which is capable of such subtlety and such bombastic spectacle. He’s always finding new and novel way to floor us — whether he’s depicting a meticulously choreographed battle, the otherworldly beautiful of New Genesis or just this amazingly executed funeral sequence. 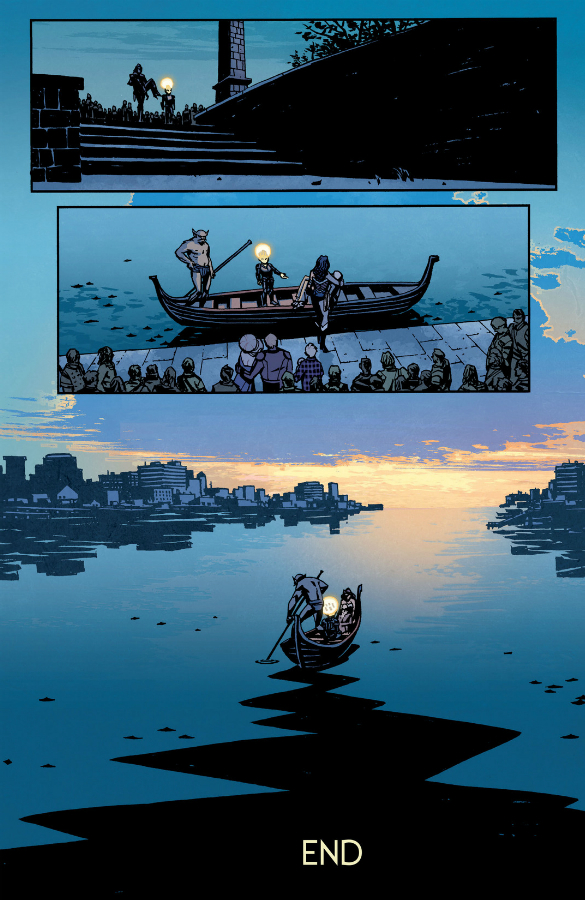 What makes The Flash special isn’t just his ability to move so damn quickly, but the sheer joy he takes in doing so. Francis Manapul is always careful to bring that joyous momentum to the page — and 2013 found Barry dealing with Kid Flash, The Reverse Flash and a handful of other Speed Force-powered civvies. Entire issues became series of two-page splashes that emphasized uncontrollable motion over anything else. Well, almost anything else: The Flash maintains a Looney Toons sense of humor, relishing moments like this one where Flash can obviously disarm Dr. Elias before getting shot. Obviously.

When you’re telling a story about ninjas, you’d better get someone that can draw one hell of an action sequence. When you’re telling a story about armies of warring ninja factions, you better get Mateus Santolouco. He finds the sweet spot between chaotic and clear and delivers some of the best action we’ve seen all year. Santolouco is also incredibly adept at distinguishing the Teenage Mutant Ninja Turtles — beyond their color and weapon differences, they wear their personalities in their faces, their posture, even their choice of disguise.

Batman and Superman are legends — modern day epic heroes like Odysseus or Aeneas — and any book featuring the pair should treat them with that level of reverence. And reverence is the name of the game for Jae Lee, who brings his obsession with baroque lines and shadows to bear on the most iconic heroes in the medium. With Batman/Sumerman, Lee carefully distinguishes the gothic architecture of Gotham with the clean deco lines of Metropolis, grounding what turned out to be kind of a weird story about Earth-2. Plus, it’s damn fine art to behold. No one draws like Jae Lee. 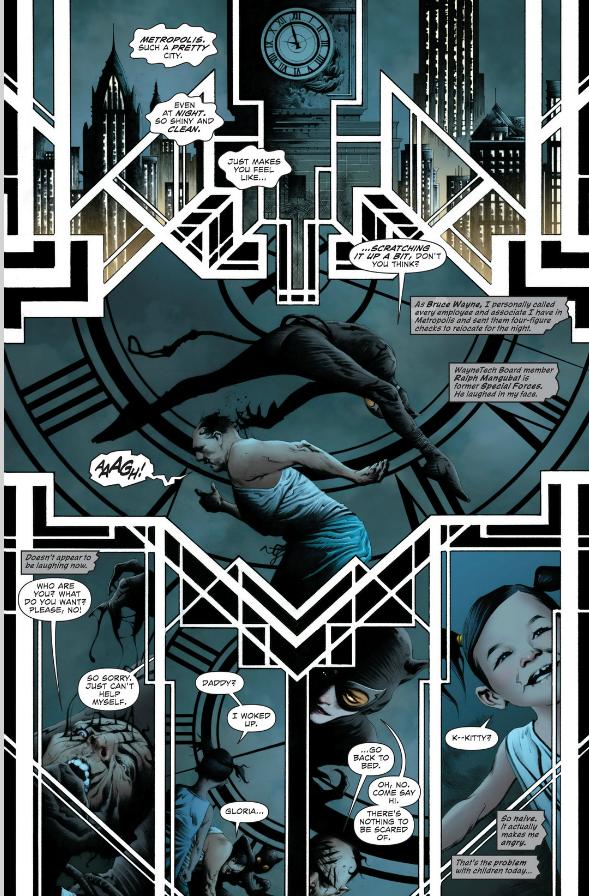 When Jeff Lemire and Andrea Sorrentino took over the reins on Green Arrow, the message couldn’t be clearer: this is one of the Important Books coming out of DC’s offices right now. And while Lemire made some pretty drastic changes to the story right off the bat, Sorrentino imbued the series with a much-needed sense of style. Not only are the majority of the drawings sleek, sexy and exciting, but he gives special graphic attention to heighten dramatic moments. Life or death split-second decisions turn into high-contrast inserts, drawing our attention to each blow, and making every arrow exciting.

The scale of The Wake is positively enormous, reaching back to before the dawn of man. Sean Murphy has drawn all of these surprises with shocking confidence, and there’s no part of this slowly-evolving mythology that appears to be outside of his wheelhouse. City-terrorizing sea-giants? Neanderthal scientists getting their eyes gouged out by alien technology? Claustrophobic corridors in a crippled underwater rig? All perfectly rendered with Murphy’s noticeably hands-on approach. Literally — his toolbox of textures (which includes everything from zip-a-tone to dry brush techniques) makes regular use of his own fingerprints. 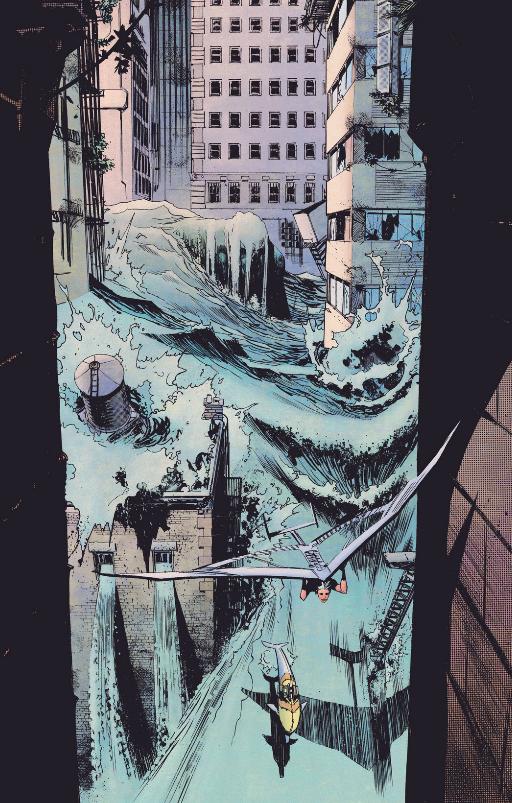 By our count, Williams only drew two comics this year: Batwoman 17 and Sandman Overture 1. Even with just those two issues, it’s hard to see where the hell he finds the time to craft such mind-blowing images in such alarming detail. No matter how crazy his fantastic stuff is — and it gets pretty crazy — it’s all grounded in astonishingly compelling acting. And no single panel is composed in isolation, every page is a cohesive whole, telling the most beautiful and moving versions of the story. We have to wait until the end of February for the second issue of Sandman, but for work like this, it’s absolutely worth the wait.

Hawkeye took a lot of risks this year, perhaps the biggest of which was exploring something as emotionally difficult as the death of a friend through Aja’s design-minded art. The image below is from the largely schematic pizza dog issue, which saw Aja flexing his graphic talents in their rawest forms, using everything from floor plans to flow-charts. Somehow, this never veers too cold or too detached. In fact, those same techniques that might seem mechanical actually express clear emotional truths about his characters. Of course the space between Clint and Kate is rendered as an empty outline — there’s nothing keeping them together anymore.

Brian K. Vaughan has said that he gives Fiona Staples zero visual reference for Saga. That means that she invents these character designs on her own. Every issue brings a handful of amazing designs that run the gamut from the adorable to the grotesque to the mundane, often combining all three into one fully realized character. More importantly, she manages to convey clear (and subtle) emotions from these bizarre designs, such that every moment lands perfectly. The most recent pastoral arc of the series has allowed all of our characters to chill out on some beautiful planets, all of which provided warm, inviting backgrounds which Staples draws in loving detail. Basically, Staples nails every aspect of the storytelling.