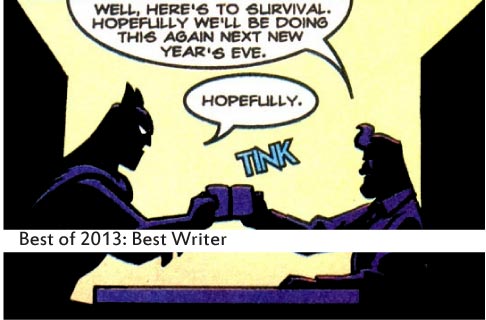 In such a collaborative medium as comics, it can be difficult to say where a writer’s influence on the story ends, but there’s no question on where it begins: words on the page. Whether they thrill, elate, chill, or deflate, the best writers create characters, settings, and situations we want to return to, again and again. These are our top 13 writers of 2013.

With Astro City, Kurt Busiek presents a sprawling world with dozens of well-established heroes and villains. It’s intimidating for a newbie, but Busiek crafts stories that require zero background in his world. And he picks the darndest corners of Superheroing to explore — an operator for a call-center that dispatches superheroes, a support group for people with powers who don’t want to be heroes, a small-time gangster who denies his shot at supervillainy. For as well as he understands heroes, Busiek seems more interested in everything else in their world.

Smiles are hard to come by in the uber-serious world of DC Comics, but Brian Buccellato’s writing continues to be the rare exception to the house rules regarding levity and joy. His Gem Cities continue to be a beacon of happiness in the DC Universe, even as the even-more-serious-than-usual events of Forever Evil threaten to crush the life out of it. With an assured sense of his characters’ voices (and how they bounce off of each other), Buccellato is able to keep the action fun, whether they’re facing inter-dimensional supervillains or just a run-of-the-mill pack of superpowered gorillas. Which isn’t to say that he can’t achieve a serious moment when the story calls for it: his Reverse Flash issue is one of the most poignant of Villains Month.

Ales Kot caught our attention this year when he briefly took the helm of Suicide Squad, injecting some much-needed style and intelligence to that series. That same style and intelligence is on full display in Zero, his (relatively) new series from Image. Kot seems to delight in playing with dangerous characters, and is supernaturally skilled at showing the reader just enough so we know better than to ask for more details. Kot was recently snatched away from DC by Marvel, and it’s thrilling as hell to know he’ll be writing Ghost Rider — sounds like a perfect fit.

What’s more remarkable about Lazarus: its impeccably engineered (and exhaustively researched) mythology, or the fact that all that backstory doesn’t prevent it from being a taught, emotionally charged drama? Few series handle both ends of the spectrum so well, but then again, few series are written by Greg Rucka. One of the most studied and disciplined writers working in comics, Rucka was at the top of his game this year, crafting an epic that is part Orwellian dystopia, part classical tragedy, but all very much of its time and place. The world is just starting to open up, but with Rucka at the helm, we can’t wait to see where it goes.

Don’t call it a comeback. Simone’s legion of fans fought tooth and nail to get her back on Batgirl to wrap up the mega-story she starting laying the groundwork for years ago. Even then, her three-issue conclusion was busted up by Villain Month and Zero Year, so it’s a testament to the strength of her storytelling that it landed so confidently. Plus, if we didn’t have our fill of strong redheaded heroines penned by Simone (a strong redheaded heroine in her own right), there was always the stellar Red Sonja, which was a surprise hit for us. Or, we would have been surprised if we hadn’t seen Simone’s name on the cover.

Gerry Duggan had a banner year on Deadpool, starting off with an arc that screamed “I’M CO-WRITING WITH A PROFESSIONAL COMEDIAN” and then skewed darker and darker until they justified Wade Wilson’s specific brand of mania as honestly and tragically as possible. The series is incredibly deep and constantly evolves along with a character not normally known for his growth potential. Duggan is also a damned scholar of Marvel mythology and comics history in general, which he shows off masterfully in Deadpool’s revolutionary “inventory” issues. We’re excited to see him port all of that depth and humor to Nova, which he confidently took over in December.

The Man Without Fear. Indestructible. These are words used to describe some of the characters Mark Waid wrote in 2013, but they could just as aptly be applied to the Waid himself. Arcs that find Daredevil facing off against white supremacists, or Hulk taking an active role in his own origin require a level of derring-do that is rare in the month-to-month grind of comics. Underneath that fearlessness is an assured sense of his characters’ emotional cores, such that he’s able to consistently put even the most indestructible heroes in legitimate peril. He’s the rare writer where half of the thrill is what he does, and the other half is watching him do it. Daredevil looks to be headed in a decidedly new direction in 2014, and we couldn’t be more excited to have Waid behind the wheel.

For most writers, publishing a creator-owned series (Letter 44) with a publisher like Oni would be the crowning achievement of their year, but for Charles Soule, that’s just the tip of the iceberg. He also successfully turned around a floundering series (Red Lanterns), is helming a series featuring two of DC’s flagship heroes (Superman/Wonder Woman), and even successfully took over a series after a beloved run by one of the industry’s biggest names (Swamp Thing). And that’s not even all that he’s writing. A man of 1,000 voices, Soule is fluent in a range of tones, from writing a genuinely funny Deadpool (Thunderbolts) to matching the pervasively grim house style of DC. 2013 was a big year for Soule, and with (at least) two new series on the way (She-Hulk and Inhumans), 2014 looks to be even bigger.

In all of Lemire’s work, there’s an undercurrent of experimentation. This year saw him vastly expanding the mythology of Green Arrow and exploring every facet of Animal Man’s life. But that experimental nature enthusiastically boiled over in his Vertigo series Trillium. Trillium is a series with formal hooks that differ from issue to issue, alternatingly delighting and frustrating his audience. That type of experimentation is even present in his most commercial work — co-writing the Trinity War event — where he was able to leaven the proceedings with a lot of the oddball mythology he had cooked up in the pages of Justice League Dark. With so much experimentation keeping his work fresh, it’s impossible to know where he’ll take us next.

Forget everything you ever thought you knew about [blank]. Fill in that blank with whatever you want, because the King of Secret Histories has got you covered. This year, Snyder explored the secret nature of Batman and Joker’s relationship, Batman’s origin, an alien’s role in American History, and aquatic apes as an off-shoot of human evolution. And he does it all with a confidence and attention to detail that is impossible to ignore. 2013 found Snyder cranking out hit after hit — and collaborating with some of the biggest artists in comics — cementing himself on everyone’s must-buy lists. With American Vampire set to return in March, there’s no reason to assume the hit-parade needs to stop any time soon.

“Sweetness” might not be the first word that jumps to mind when thinking of the sometimes-profane, sometimes-emotionally-stunted characters Matt Fraction writes, but it seems to be the uniting theme of his work in 2013. FF is perhaps the most obvious example — where cute kids and the adults who care about them are the order of the day — but it’s present in everything. Behind the all the giggling and snorting, Sex Criminals has been a charming exploration of the heady, early days of a budding relationship, and behind all of the chronology- and perspective-shuffling, Hawkeye has been the sad story of a lonely guy who drives away almost everyone that cares about him. That kind of sweetness runs the risk of becoming cloying or tidy, but Fraction always takes care to keep the proceedings grounded in the funny, weird messes he makes.

2012 found us wringing our hands about about Brian K. Vaughan — we loved his writing, but were too awe-struck find much of substance to say about it. This year, Vaughan graciously gave us footholds on both of his ongoing projects: Image’s Saga, and his self-published web-only The Private Eye. Both feature the directed plotting, rich characters, and expansive world-building Vaughan is known for, but they’ve also revealed a sly commentary on their own media — Saga about storytelling generally, and Private Eye about the internet specifically — which immediately endeared his writing to our discussion-loving hearts. His writing is as pleasurable to read as ever, but now rewards close readings with an extra layer of satisfaction.

In the black-and-white world of comics, nobody does gray better than Brian Azzarello. For his characters, that grayness might manifest as moral ambiguity (which made Azzarello the perfect choice for the controversial Before Watchmen series Comedian and Rorschach, both of which wrapped early this year), and for his readers, that grayness may become narrative ambiguity. Whether he’s writing a capital ‘H’ Hero like Wonder Woman, or an unabashed anti-hero like Lono, Azzarello keeps us guessing on what they’ll do, and what it means. That second question is basically our watchword here, which makes Azzarello’s dense, multifaceted writing our favorite of 2013.