Drew: I’ve always been suspicious of happy endings. Not that I’m a grump or a pessimist (or, not just because I’m a grump and a pessimist), just that I think the tendency to wrap stories up with a nice bow tends to make them same-y. Knowing everything will work out in the end robs stories of most of their drama, and more importantly, they tend to ring false. Still, there’s something undeniably alluring about a happy ending — a gentle reassurance that the characters will be okay specifically, and that things tend to work out generally. It’s incredibly tricky to acknowledge both aspects of the happy ending, but Alan Moore’s classic “For the Man Who Has Everything” does it beautifully by presenting (and ultimately rejecting) a classic “what if” scenario. Justin Gray and Jimmy Palmiotti aim to tap that same magic in All-Star Western 26, but as is the case with most comparisons to Moore, they come up just a little short.

The issue opens as a pregnant-but-still-ornery-as-ever Tallulah Black collects a bounty on her way to her own wedding. And the groom? Jonah Hex. Anyone paying casual attention to this series might have been confused at the complete jettisoning of the “Jonah Hex, Time Bandit” storyline, but astute readers will remember the appearance of Moore’s own Black Mercy at the conclusion of the previous issue. I am duly familiar with the Black Mercy, but was still thrown for a bit of a loop as I read the opening of this issue. Palmiotti and Gray tease us with just enough new information to keep us from focusing on the elephant in the room. Is that Jonah’s kid? How did he get back to the 1880s? What’s with the guests at their wedding? Their diversions are made all the more effective by something All-Star Western hasn’t had since the relaunch: feature art by someone other than Moritat. 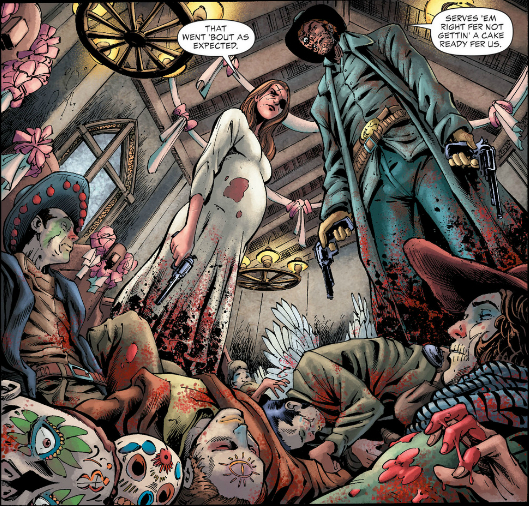 Jeff Johnson and Norm Rampund deliver art in this sequence that is classic western in a very un-Moritat way. Don’t get me wrong: I love Moritat’s work on this series, but I think it is a stroke of genius to have this dream sequence drawn by an artist with more typical cowboy comic sensibilities. It suggests that Hex wants to idealize his own life the same way everyone else already does.

Hex quickly realizes something is amiss, and wills himself out of the Black Mercy’s spell, which is maybe my only beef with this issue. Part of what makes the Black Mercy so scary — and what makes “For the Man Who Has Everything” so moving — is the sheer will it takes to give up your heart’s desires. Superman is able to do it, but only after slowly coming to the realization that this isn’t reality. That takes superhuman will and lots of time.

This issue ultimately spends about as many pages in Hex’s dream as “For the Man Who Has Everything” does in Superman’s, but the amount of time spent in each is dramatically different. Moore devoted 76 panels to Superman’s dream, while we only spend 54 panels in Hex’s. More importantly, several days elapse in Superman’s dream, giving us a sense of what his life looks like in this alternate world he’s created, but we only spend a few hours in Hex’s. Again, the biggest difference is the way Superman slowly arrives at this conclusion — hints that something is amiss are present from the second page of his dream — where Hex only lets on that something is up in the very last page.

Did he know all along? It’s hard to say — Hex is (and should be) much harder to read than Superman, but that lack of emotion keeps us pretty firmly outside of Hex’s perspective. Indeed, part of the dream follows action that Hex isn’t present for, which doesn’t make a whole lot of sense. Ultimately, then, the only drama comes from our own knowledge that this isn’t right, which brings us back to the conundrum of how familiar we are with this series. Savvy readers will know from the start that this is a manifestation of Hex’s innermost desires, while those picking this issue up without context will be suddenly jerked out of an interesting (though ultimately impossible) story with a brusque “It was all a dream (brought on by an alien parasite).” The dream’s only real utility, then, is showing us what Hex really wants, but without more of a sense of what losing it means to him, it reads as basically meaningless — just another violent thing that happened in his violent life.

The rest of the issue snaps us back to the present, which is oddly much more comfortable. Palmiotti and Gray have packed a lot of cameos into this series over the years, but this issue might top them all: Constantine, Swamp Thing and Superman. The pacing and inventiveness rushes right back, and the issue concludes with the promise of Superman confronting (a manifestation of) the legacy of the American Civil War. That sounds like fun.

Patrick, I’m cold and hot on this issue. I think the reality stuff was as enjoyable as ever, but I thought the dream sequence left me wanting. Part of that is based on expectations set by “For the Man Who Has Everything,” which may not be entirely fair. I’m curious to hear what you thought.

Patrick: I arrive at the same conclusion you do about what we get out Hex’s dream, but I think we’re almost meant to find it less emotionally effective than “For the Man Who Has Everything.” Hex’ fantasy is bizarre at just about every possible turn – he doesn’t imagine that he has a family, he imagines that Tallulah is mad-preggers and wants to marry him. He doesn’t even really imagine himself as all that content in the scenario to begin with. It has all the hallmarks of a good Jonah Hex story: booze, bounties and violence and everything else feels wrong. Like, how fucking crazy is that drawing of pregnant Tallulah? Her enormous pregnant belly spills out through her normal costume and bears the scars that (we’ve heard tell) are all over her body. 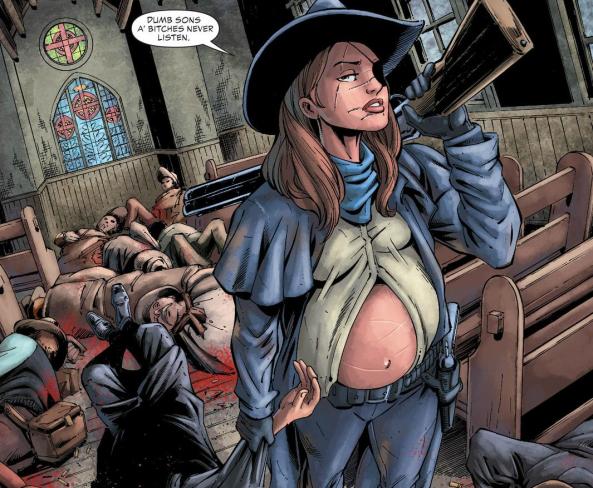 Blood splattered on her pants and shotgun slung over her shoulder – there’s nothing comforting about this image. It is familiar and oddly typical of Hex’ life, but never something that would bring anyone peace. And “not peace” is totally the theme running through the fantasy. Hex smashes a bottle in some dude’s face and tosses him off a train for almost no reason whatsoever. Then the whole fantasy ends with him shooting his wife / baby-mama in the gut – that’s how Hex rejects this reality. In FTMWHE, Superman doesn’t bludgeon his fake-son, Van, to death, he just lets him go. What I’m saying is that Jonah might not have these more peaceful transitions in his heart at all, no matter what kind of alien parasite has attempted to unlike its deepest desires.

I didn’t want to spend my whole piece discussing similarities to “For The Man Who Has Everything” – especially when Drew did such a nice job comparing how Palmiotti and Gray’s story does and does not measure up to it. I do think it’s fascinating that that Superman Annual has the kind of staying power to be an absolutely necessary subject when discussing this issue. The list of individual comics that are this firmly entrenched in the cannon is incredibly short, and for as much shit as superhero comics take for being in love with their own histories, I think it’s worth celebrating when the actual works of art are held in the same kind of esteem as the mythology they contain. Comic creators are always rebooting old characters and old ideas, and it’s just nice to see this old story given the same kind of treatment.

Plus, it’s not even like Palmiotti and Gray stay stuck in the past for all that long. It’s a breath of fresh air when Moritat’s stunning art returns to the page. I have my standard complaints about the way he draws breasts (so, so big), but his take on the rest of the cards in DC’s deck is pretty cool. I love the way he gives Swamp Thing these very bottom-heavy appendages, emphasizing his beastliness. You and I may know that there’s so much more to Alec Holland, but for all Hex knows, Swamp Thing is just a straight-up monster, and all of Moritat’s drawings reflect that. It makes it all the more interesting when Hex’ sides with Swampy over Constantine. 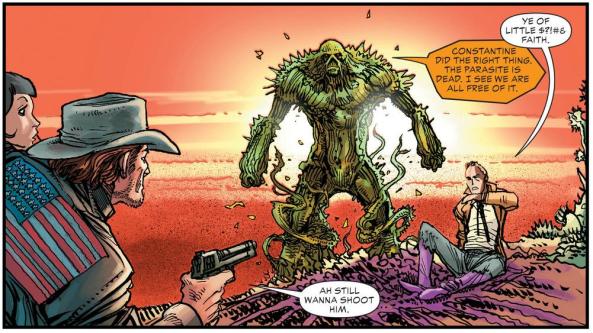 That panel is also a good example of Mike Atiyeh’s incredible colors. Normally, we only see this sort of attention applied to desert canyons or some other sweeping western vista, but the careful attention pays off even bigger when applied to this trio of DC anti-heroes (and a bunch of purple alien-goo). It’s also just nice how the colors slowly track the dawn, which comes to a head in this panel in the form of a sunrise. Everything before this moment is still dark, and afterwards it’s morning. For as loosey-goosey as the fantasy portion of this issue is with time, this scene plays out in very specific, measured time, demonstrated clearly and effectively by Atiyeh.

I’m really excited for the next issue. This series has been getting a lot of mileage out of the Hex + [anyone] = COMIC MISMATCH, for its entire run. I don’t know if the logical progression is Arkham to Booster Gold to John Constantine to Swamp Thing, but the natural conclusion to that run is definitely Superman. Oh! Or maybe it’s Batman! A man can dream, right?