Shelby: New Year’s Eve is a night of…well, generally heavy drinking, but it’s also a night of contemplation and renewal. The last year, with it’s good and bad, is over; whether you liked it or not, it’s over, and it’s time to prepare for a fresh start in the new year. I definitely understood that this year, since I moved to a new apartment December 29th. It was a short move, just a block away, but having lived in my last place for 3 years made it a really big change. There’s the “out with the old” as you throw out a bunch of crap you can’t believe you kept for so long, and the “in with the new” as you figure out a new way to arrange your home. Like New Year’s Eve, it’s a bittersweet thing, and Kieron Gillen and Jamie McKelvie (with a little help from their friends) capture it perfectly at the end of their run on Young Avengers. Nothing but spoilers and revelations ahead, folks.

I can’t really talk about this issue without including the last one, too. Issues 14 and 15 take place at a New Year’s Eve teen hero after-party blow-out; the books are broken into little vignettes, each with a different art team, that wraps up the series for each character. Wiccan and Prodigy resolve some tension around The Kiss, America tells Billy to quit doubting himself and just be himself, and Wiccan and Hulkling have a mushy moment on the dance floor. Ms. America reminisces; apparently, her utopian universe was created by the Demiurge himself. She escaped it forever when her moms died saving it, and now she has to work with the boy who would become her creator. Kate tells Noh-Varr (who is the shirtless DJ because duh) he had the girl of his dreams, but he was too in his own head to realize it, and then gets kissed by Tommy (more on that in a second). Noh-Varr realizes he needs to stop living in the past, and plays “Be My Baby” just for Kate, because he knows she would like it. Loki chats with Prodigy about what it’s like to be a story and how he can’t escape being himself, even if he might want to. He also maybe makes a move on Prodigy, who then has a little chat with Patriot. See, he figures Patriot is one of them, from the future, sent back to make sure the future happens as it should. Prodigy kisses Patriot (who might have formerly been him, which is weird), and that brings Tommy back (which is weirder). Finally, it’s closing time, and our team heads off to breakfast. America kicks a hole to the nearest all-night diner, and Loki posts one last pic:

Excuse me, I think I have something in my eye. Gillen has consistently written these kids in a way that reminds us somewhat jaded adults of the passion and drama and excitement of being a teenager, and this issue is no exception. The issue is more than a contemplation of the old year and prep for the new; the team has grown and matured. Loki’s last look at the picture of them when they were “young” perfectly captures that bittersweet nostalgia I feel when I look back at my own childhood. I felt exactly the same when I moved, and found the box of stuff I had saved from high school and college.

It’s an interesting conclusion to the arc. The whole story with the Mother parasite has been about the difference between adults and teens. Our teen-aged heroes were put in the position where the adults literally didn’t get them; it was actually an us-vs-them situation. While the Young Avengers were fighting the adults, they were secretly growing and maturing into adults themselves. It’s such a simple idea, a process we have all gone through ourselves, and Gillen presents it so sweetly and so genuinely.

Speaking of sweet and genuine, all the artists these last two issues deliver some really beautiful little moments. In issue 14, Christian Ward give us a quirky, painterly look at Ms. America’s childhood.

I love the look on America’s face. Even as a child, she had that no-nonsense attitude; most kids (and adults) would just break down if they learned both their parents were dead. But she just thinks it through and realizes there’s no utopia there for her anymore. It’s lovely and heartbreaking. Speaking of lovely and heartbreaking, Becky Cloonan’s take on Noh-Varr’s story might be my favorite. 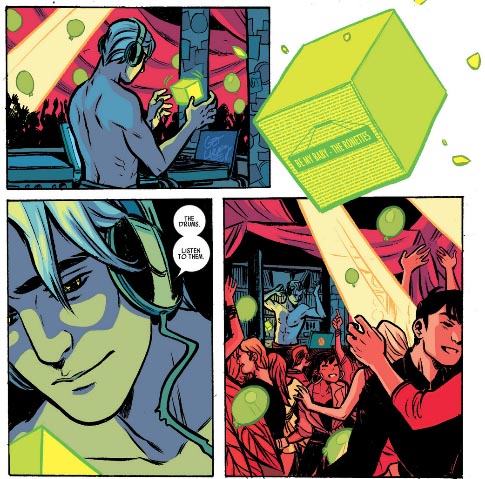 Again, it’s the look on his face that really gets me. Remember way back in issue 1, when Noh-Varr and Kate were up on his ship? He played her a song, saying, “The drums! Listen to them!” That single panel of him saying that again as he plays a song for her at the party kind of chokes me up. He looks sad, yet content. We don’t know if Kate heard the song and knew it was for her, and we don’t have to know. All we have to know is he played the song because he thought she would like it, and that he remembers that first moment the two of them had. Like the rest of the issue, it’s a bittersweet contemplation of the past paired with a hopeful look for what’s to come. It’s sappy and realistic and a perfect conclusion to this title. Patrick, I’m going to have to turn this over to you, I seem to have something in my eye again.

Patrick: Here’s a tissue Shelby. You take a few minutes to compose yourself and I’ll say a few words about Young Avengers.

First — and most trivially — I want to disagree about what Noh-Varr is doing in the DJ booth. He doesn’t put “Be My Baby” on – that’s not a song for Kate, that’s a song for Noh-Varr. Instead, the doo-wop king puts on Daft Punk’s “Get Lucky” (even though he doesn’t mention the song by name, we can see him handling the vinyl) – something that he may not be specifically passionate about, but something he knows she’ll get a kick out of. I had previously criticized some of Kieron Gillen’s dialogue (particularly the dialogue he writes for Noh-Varr) for being too baldly self-interested, almost half-bragging about his own musical knowledge. And because Noh-Varr is the frequently-shirtless, frequently beard-sporting, ultra-competent hero of this story, I found it self-indulgent to have the author’s own tastes tumbling out of Marvel Boy’s mouth. My own criticism melts away in this scene – Noh-Varr’s obsession with 60s girl groups, and his insistence on talking about them constantly, is a fully functioning character flaw. It’s not like he’s just a mouthpiece for Gillen’s “Young, Gifted and Black” jokes, but he’s a real kid with real interests that might annoy his friends from time to time. That’s rad.

I’ve also had some time to think about this series’ view on sexuality. I’m not alone – the last story beat here addresses that “wait, is everyone gay?” question head-on. The answer is a delightfully shrugging “sorta…?” Both Loki and Noh-Varr have cultural explanations for their homosexual actions, and Prodigy has absorbed everyone’s sexual preferences, so they’re not going to be “gay” in the traditional sense of the word. But everyone appears on a sexual spectrum – I love it when Ms. America tells Kate that she’s “not that straight.” That’s an important part of the teenage experience, one that I think Gillen is smart and courageous to address in this issue. Is everyone gay? Of course not. Is there a period during which time you have to figure it out for yourself what you are? Yeah, and it’s when you’re a teenager. Everyone is so quick to romanticize sexual discovery that they overlook sexual exploration. But Gillen and McKelvie let our characters wrestle with all of it, and it’s rewarding that they can come out on the other end of it and just say that they’re cooling being whatever.

Man, this issue and the previous are just a bunch of nice character moments, huh? For as little as I understand exactly what happened with Loki(s), I’m enthralled with his explanation of why he has to go back to being a bad guy again. It’s because that’s what he needs to be — not personally, not societally, but because that’s his role in the fiction we’re reading. Loki doesn’t refer to himself as a character in a comic book, but he does seem to recognize that he is a character from mythology, which puts him in quite the predicament. Villains don’t reform in myths, certainty not the tricksters. They steal your heart and then make you feel like a fool for letting them get so close. He has no choice. And I like that even though he seems to accept that this is his lot in life, he doesn’t actually understand why it has to be that way.

[Oh and before anyone tries to explain it to me, I’ve had multiple people walk me through Loki’s consciousness splitting and him becoming a kid and murdering himself. It never sticks. At this point, I’m content with Loki’s explanation – he’s a story.]

I guess the one moment that misfired for me was Prodigy with Patrinot. Shelby walked through this moment in her summary, but she included enough “(which is weird)”s to indicate that she wasn’t really following it either. I like the idea that we’ll never know what’s going on with that character. Is that Prodigy’s sacrificed humanity from the future? Eh, maybe? I’ll tell you one thing – that sounds an awful lot like a fan theory. I like that the series concludes without any real answers about who or what this thing is – in fact, his mystery increases when making out with him produces Tommy. Like: what the fuck? For my money, Patrinot doesn’t need an identity, and can rest as a mysterious motivating factor, one that could be any number of things, but is ultimately nothing more than what the team needed to work together to stop Mother. It’s an abstract, gooey concept, but if any series can leave that kind of thread dangling, it’s this one.

Well, that’s closes the book on Young Avengers. We end up seeing a lot of our favorite comics get snuffed out early. Or sometimes creative teams get reshuffled at the last minute. In those cases we never get to see the series say goodbye. I can’t help but image what a goodbye from Batwoman or Sword of Sorcery would have looked like. You’ve gotta commend Marvel for letting this series end on its own terms with its own wonderfully reflective coda.