Today,  Taylor and Shelby are discussing All-New X-Men 22, originally released January 22, 2014. This issue is part of the Trial of Jean Grey event.

Taylor: Poor Jean Grey, girl just can’t catch break. When you’re one of the world’s most powerful mutants, it’s hard to lead anything resembling a normal, happy life. There’s always going to be someone who wants to harness your power or someone who wants your help for good or for evil. If that weren’t bad enough, when you wield the powers she does maintaining your everyday life and personal relationships becomes a challenge in and of itself. The ability to read people’s thoughts while maybe useful can also be a burden, for the old axiom “ignorance is bliss” sometimes proves too true. All-New X-Men 22 begins The Trial of Jean Grey, a crossover event with Guardians of the Galaxy, and if this issue is a harbinger of things of things to come, it will be a blast. Not only will we get some great “X-Men in Space” action, but the complex of character of Jean Grey will step into the limelight virtually guaranteeing an entering and emotional ride.

After escaping William Stryker Jr. and his mutant-hating Christian zealots, the X-Men are enjoying some time off at the New School. In the cafeteria Jean Grey and Cyclops get into an argument, as they are prone to do. The subject this time revolves around Jean and her mind reading and the fact that she knows exactly how her future plays out. Outside, Iceman is dropping some old school rhymes when suddenly he is attacked. The X-Men assemble and put up a fight, but they are outclassed by their enemy, who appear to be Shi’ar, supposed X-Men ally. They kidnap Jean Grey but leave the rest of the X-Men, who are there to meet the Guardians of the Galaxy, just in the nick of time to save nobody.

Brain Michael Bendis pens this story and I’ve come to look forward to any issue where he is allowed the chance to develop his characters, even a little bit. In the case of this issue the spotlight falls directly on Jean we’re given a glimpse into the chaotic world that is her reality. When her and Scott get into in the cafeteria it’s more than just a little tiff. Both characters are emotional and given Jean’s reactive personality, things do not go well. Their argument begins because Scott feels like Jean reads his mind without his consent. This isn’t necessarily the case, as there are just some things Jean is unable to keep out of her head. While the narrative of Jean being unable to control her powers is nothing new to anyone familiar with the X-Men franchise, I love how Bendis approaches it subtly. It’s a welcome approach that feels different and makes me feel for Jean more. I suppose it’s just easier to do this when she’s accidentally reading minds as opposed to accidentally killing people.

Whatever the case may be, Bendis does a wonderful job of scripting this exchange. Instead of giving us a look inside her telepathic exchange with Scott, Bendis chooses to keep parts of their exchange privately tucked away inside our heroes’ heads. 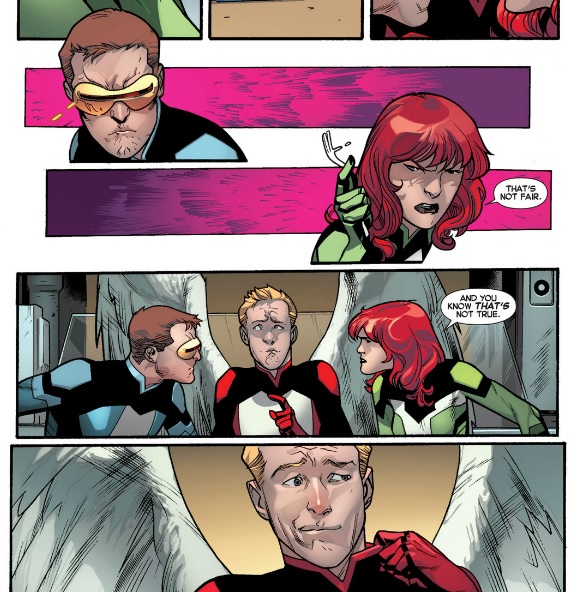 This keeps us guessing about exactly what Scott of Jean was thinking. While we do garner enough information from the spoken dialogue to understand what the main subject of their argument is about, we don’t know exactly what words, or thoughts, were used. Basically, we don’t know how cutting Scott’s words were and/or if they were intended to hurt Jean. This accomplishes the paradoxical task of deepening our understanding of their relationship while also making it more secretive. Also, it’s incredibly entertaining to have Angel sitting between the two while the argument takes place. It’s awkward as heck, and boy-howdy does Stuart Immonen appear to have fun drawing this.

Speaking of which, I’m incredibly happy to have Immonen back on this title. I’ve complained before about his absence on the previous couple of issues, so I just want to say it’s good to have him back. At this point in the series, I feel like these characters are as much his as they are Bendis’. Immonen’s art so perfectly seems to gel with Bendis’ storytelling for reasons I’ve yet to entirely discern. The argument scene above is a good example of this. Angel barely has any lines but his inclusion, and facial expressions as depicted in the art, help to buoy the scene from being too heavy. It’s a pleasure to see the art and the writing interact in such a way that creates a unique and multilayered tone. Of course, sometimes no words are even needed to set the tone, as when we see Jean crying when the Shi’ar commence their attack. 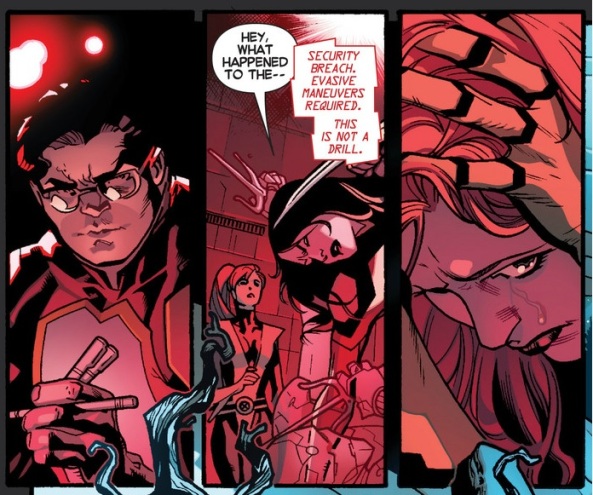 Perhaps she knows the attack is because of her and perhaps not. Maybe she’s just tired of living a life where strife is the one constant. Or perhaps she’s just sad because she’s a human who just had an argument and you know, has feelings. In any case, Immonen’s wordless portrayal of this is fantastic when compared the reactions of those around her. You feel for Jean in this instance and to such emotion in such a small panel is a testament to Immonen’s connection to these characters.

My dear Dr. Peterson, how do you feel about this issue? I’m really excited by the prospect of this crossover, and X-Men in Space, are you? Does Jean’s plight interest you at all? Also, this issue manages to be really funny and serious at the same time, how’d that happen?

Shelby: X-Men! In! Space! I love the Guardians, and I am really excited to see this team up in Bendis’ hands. But, as excited as I am for all that, I agree with my esteemed colleague Dr. Anderson; it’s the character moments that that really make this title shine. The fight between Jean and Scott in the break room was masterful, it really stuck with me. It’s interesting to see only glimpses of the conversation, and still feel that I know exactly what is happening. Even without realizing it you fill in the blanks as you read, making the story just a tiny bit more personal to you. Really though, it’s the inclusion of Angel that makes the scene so interesting. The scene is made way more uncomfortable by his presence, that is definitely obvious, but what isn’t quite so clear is that he represents our intrusion on the scene. He’s our stand-in witness to the scene that takes it from being an interesting way to communicate to an embarrassingly awkward situation.

I really like the separation of the members of the team. They’ve got this weird, shared experience of being displaced in time, but instead of letting this bind them together, it seems to be driving wedges between them. Hank is off in his lab, Bobby is being Bobby, and the three who are physically together still manage to be on completely separate planes. Now that Jean has been taken, will the team pull back together for her? I mean, obviously they’re going to pull together and team up for a Rescue! In! Space!, but will they bridge the real gulfs that seem to have grown?

As to the impending trial, it could be for anything that has happened, is going to happen, or was supposed to happen but didn’t. Since these particular X-Men’s exploits could potentially encompass everything in their history, I couldn’t begin to guess what she could be on trial for. I’m excited to see where Bendis will take this story, and what he’s going to do with the Guardians while they’re there. Why do I have a sneaking suspicion that Jean will vacillate between proudly defiant and scared and alone, and that I’ll be there for her every step of the way?