Spencer: The Superior Spider-Man 26 is unique in that it features three different stories—each illustrated by a different artist, no less—that do not intersect or connect at all throughout the issue. All three plots are building up to the sure-to-be-epic conclusion of Superior, but each also ruminates about identity, whether it be something as superhero-esque as secret identities or something more complex, like how memories help form a person’s core identity. You’ll find it all in The Superior Spider-Man 26, folks!

Our first story opens as Goblin King and Hobgoblin’s armies are engaged in a fierce battle. Goblin King calls a truce and proposes that he and Kingsley duke it out, mano-a-mano, with the winner taking all. Each Goblin talks trash about the various wearers of both mantles, and a vicious jab about Harry Osborn leads to Goblin King taking a Pumpkin Bomb to the chest; this blast reveals that the Goblin King is indeed Norman Osborn. Kingsley panics and tries to talk things out, but Osborn strangles him to death and takes over his army, further fortifying his forces for his upcoming battle against Spider-Man.

I feel like this whole fight is foreshadowing for Otto and Peter’s final battle over their shared body. Think about it: first we have Goblin King, Norman Osborn, the first and the most iconic and famous of the Goblins, representing Peter Parker. Then we have Hobgoblin, the clever and enterprising “pretender”, representing Otto Octavius. We know from upcoming solicits that, in one way or another, Peter is going to come out victorious over Otto, just like Osborn does over Kingsley, but what strikes me most about this battle is the way everybody reacts when Goblin King is finally revealed to be Osborn. 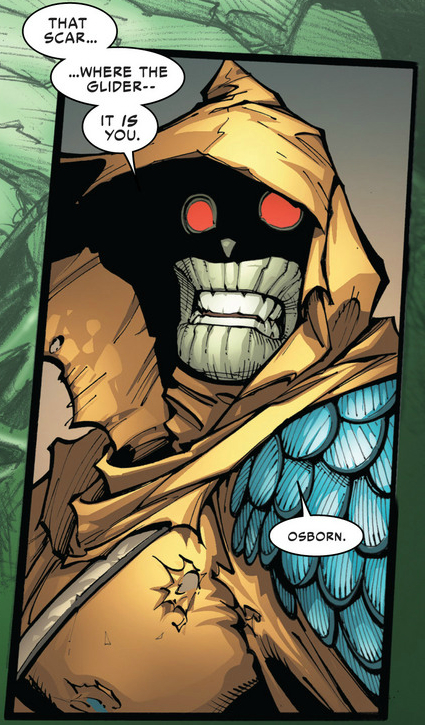 Hobgoblin’s fear when faced by Norman Osborn is understandable—and very telling about the kind of person Norman is—but there’s also just a hint of reverence mixed in with his fear. As Osborn chokes Hobgoblin to death, the gathered crowd cheers him on, chanting his name like crazed sports fans supporting their favorite team. They remind me of Peter Parker fans who can’t wait for his return. I mean, let’s face it, there’s been quite a few Spider-Men—Otto, Miles Morales, Ben Reilly, Miguel O’Hara—all with sizeable fanbases, but none of them will ever be the original. Peter Parker’s name has the same kind of recognition as Osborn’s does, and in the world of comics, that amounts to quite a bit of power.

Fortunately, Kingsley’s fate gives me hope for Otto. The end of this issue reveals that he’s alive and well in Paris, and that the Hobgoblin Osborn murdered was a brainwashed servant of Kingsley’s. If Kingsley does indeed represent Otto in this little skirmish, than I hope this means that Otto will be able to find a way to survive—and maybe even a way to remain on a heroic path—after Peter reclaims his rightful mantle.

This issue’s second story takes place in the shared psyche of Peter and Otto, where the weakened consciousness of Peter Parker is struggling to reemerge. The loss of Peter’s memories has stripped him of his identity for the moment, but fortunately, Otto has left him just enough to reform the foundation of who Peter Parker—and Spider-Man—truly is.

While other characters in this issue are using their identities as ruses or tricks or excuses, Peter needs it—needs the reminders of his true character—in order to remain whole. It’s these key moments in Peter’s life that made him who he is—the man who never gives up and always finds a way to win.

One of the key questions of this series has always been whether Otto Octavius is truly a “superior” Spider-Man, and I feel like this scene is Peter unknowingly throwing down the gauntlet. Can Otto be a man who never gives up and always finds a way to win, or is that something quintessentially Peter Parker?

Over in this issue’s third and final story, meanwhile, Otto is being shanghaied by his Avengers teammates, who are demanding answers about why Spider-Man deleted the records of his medical exams. Otto claims that he was trying to protect his secret identity—calling Steve and Tony out on their silly little Civil War in the process—but when they still want to investigate Spider-Man’s strange behavior further, Otto quits the team.

Otto using Peter’s long-established desire to keep his identity secret from even his teammates as an excuse for his actions is clever, and it’s also an interesting contrast to the Goblins in our first story, who use their identities as ruses or secret weapons to turn the tide of the battle. Osborn and Kingsley’s public identities give them a sort of freedom neither Peter nor Otto have, and I wonder if that will come into play in the conclusion of this series?

Still, this segment was a little disappointing to me at first. Writer Dan Slott has been seeding the conflict between Otto and the Avengers for quite a while now, but ultimately it just ended with Otto quitting the team and seemingly facing no consequences. What it took me a while to realize is that the consequences are still to come, and they probably won’t come from the Avengers themselves.

Otto thinks he doesn’t need anyone, and in the process he threw away the strongest allies at his disposal. That decision surely won’t come back to haunt him, right?

Shelby, what’s your take on these three stories? Any thoughts on the artwork of Ramos, Rodriguez and Martin? And hey, do you think Goblin King is truly Norman Osborn? We still haven’t seen his face—or his goofy hair—and that makes me suspicious.

Shelby: The whole Goblins situation has never been my favorite part of this series. I like what the original Green Goblin means to Spider-Man, and I have loved the way he’s been subverting Otto’s spider-bots. Otto is the best only because he believes himself to be the best, and I relish every little chink in the wall of arrogance he’s built around himself. Honestly, though, the multi-Goblin thing has just been confusing for me. We’ve got, what, five goblins running around right now? Osborn, Kingsley, Carlie and her sister, and Urich, right? And while I like this constant threat of Goblin crime growing under Otto’s nose, this issue I found the big blow-out to be a distraction, and visually way too much to take in. It did, however, make the Peter-in-the-desert-of-his-mind part seem like a refreshing glass of water by comparison. 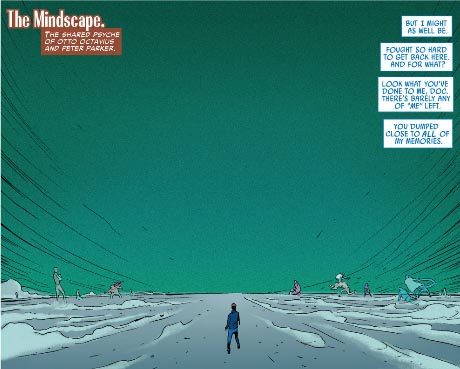 I really like this idea of Peter being put through a crucible and purified to just his very essence. To me, it speaks to our relationship with these characters throughout history. Every major comic book character has taken some … interesting paths in their publication history. You can argue ’til you’re blue in the face about continuity and which stories are more “true,” but I think everyone can agree on some core truths that make these characters who they are. Spider-Man: raised by aunt and uncle, bit by a spider, lost his uncle, burden of responsibility. Boom, done. So really, what Slott has done with Peter is strip away all the extraneous baggage the character has picked up over the years and left him with a wholly clean slate. Otto may be the superior Spider-Man in the sense of efficiency and metrics, but once Peter comes back he will be the purest Spider-Man one could be, and I think that will leave him truly superior. I’ve enjoyed seeing Otto as Spidey; not because I want the internet to hate me, but because Slott has been fucking smart and used this event as something more than a gimmick to sell comics for people to hate-read. He’s grown Otto as a character, and given us the most essential Peter Parker we’ve seen since Amazing Fantasy 15 in 1962. Superior, indeed.