Taylor: The crossover is deadly move in basketball. The quick change in direction shakes up the defender and often creates unique scoring opportunities for whoever employs it. Outside of the basketball court, however, the crossover enjoys a more dubious reputation. Countless times have two entertainment franchises created a crossover event to help generate buzz for each property, and countless times has this resulted in a complete and utter mess. I can’t blame publishers and studios for doing this though; it seems like a logical thing to do at first glance. Just take two things people like and mash ‘em together to create double interest! However, jamming two distinct franchises together is actually pretty hard, especially when each has its own distinct universe set up. That being said: what in the world can we expect from a crossover between Teenage Mutant Ninja Turtles and the X-Files?

The Lone Gunmen, a group devoted to researching conspiracy theories, has received a mysterious set of emails from the future which detail a virus that will destroy humanity. After having their story pass the acid test of Mulder and Sculley (of X-Files fame), they follow the clues and begin to investigate the Turtles as potential aliens. They find the Turtles at the farm in Northhampton and follow them on an adventure where they discover vampires… of sorts. After a battle with these vampire brood, the Turtles ditch the Lone Gumen, refusing to give the Gunmen a sample of their blood. But Leo has a change of heart and acquiesces to their plea, hoping to avoid a world catastrophe.

At first blush, it seems like TMNT and the X-Files can easily go hand in hand. Just consider it: The turtles skulk in the shadows, fighting by night and are basically giant, talking science projects. In addition, they travel to alternate dimensions and battle disembodied brains — all the while dealing with the likely possibility that their souls have been transmuted from their bodies in feudal Japan.  The X-Files similarly deals with the occult on a frequent basis and Mulder famously believes “they’re out there,” a reference to extraterrestrial life. Occasionally this franchise dabbles in time travel and, yes, it can be very weird. While those are a lot of elements on both sides, I feel like they can intrinsically coexist in some form or another. Both franchises embrace the weird and both know how to balance that with basic good fun.

Writer Ed Brisson does a pretty good job of merging these universes together and at no point does it seem like either is out of place with the other. When I first read that the Lone Gunmen caught onto the Turtles scent by seeing pictures on some vampire hunters’ blog, I scoffed. No ninja would so clumsy as to have his picture taken by a couple of amateur sleuths!

But then I remembered that crossovers are inherently silly and that maybe it’s okay if Brisson doesn’t get every aspect of the characters I love exactly correct. I mean, who could possibly care that he has April O’Neill — scientist, and not a reporter — investigating paranormal sights? While this incongruity is a little distracting, the premise of the Turtles being uncovered by amateur photographers, and thereby conspiracy investigators, is pretty entertaining. It’s outlandish, yes, but it’s the kind of fuel that can sustain a crossover. We don’t need a bunch of character driven drama or even an intriguing plot in this case. A simple, yet entertaining, ditty will do just nicely.

The light touch on the plot is present throughout this issue, and at no point does the story try to be more than it really is. While some might view that as selling itself short, I tend to think there is value in the idea of, as the ancient Greeks said, knowing thyself.  So light is this touch that Brisson even feels comfortable adding a joke about the Turtles being aliens.

It seems like a nod to the ongoing controversy that Michael Bay is making the Turtles aliens in the upcoming TMNT movie. While there are now mixed reports about the validity of this statement, it’s still an entertaining undercurrent in the TMNT community at the moment. “Turtles are mutants not aliens!” we all scream before immediately crawling back into our self conscious shells.

So we have an issue where the story is fine but the art in this issue really bothered me. On my initial read-through, I couldn’t quite put my finger on what I found so upsetting about, because in many ways it is adequate.  When I went back and reread the issue though, I realized that the entire issue seemed very flat, like something you would see on the back of a cereal box.

There are a couple reasons for this, the first of which are the pencils by Michael Walsh. He employs a style that is similar to the great Jack Kirby that, while interesting, is a little out of date. Whether this is on purpose I’m not sure, but the issue has a pulpy aura to it, and I don’t mean that in a nostalgic, good sort of way. The second aspect of the art that is problematic is that the color team of Adam Gorham and Jordie Bellaire is really quite neutral. This lack of dynamic coloring or shading makes all the settings and characters look as if they’re existing on one plane. In the picture above the only way to tell that the Lone Gunmen are behind the turtles is foreshortening, which frankly isn’t enough to make the panel convincing.

Aaron, I am a terrible host and have set you, our esteemed guest writer, up on a negative note. What about this issue did you like? Were or are you an X-Files fan and does this pass the Mulder acid test of cool? Our vampire aliens something the turtles should be worried about?

Aaron: Thanks bunches, Taylor. I do appreciate The X-Files for both entertainment value and importance to the evolution of scripted television, but I haven’t seen all of the episodes. In fact, I’m not at all familiar with the X-Files baddies borrowed for this TMNT crossover issue. As it turns out, though, this didn’t detract from my enjoyment of the comic one bit. I almost wish it had, though, since I find myself left with an entirely different problem; I feel as though I’ve experienced both The Lone Gunmen and TMNT… For Dummies®. Every plot point seems obligatory and if Brisson was ever reveling at all then I just never got that vibe.

I actually quite enjoyed the cartoonish line work and felt that it evoked a similar sensibility to other IDW TMNT, which was probably the more logical base for reconciling these two properties. After reading X-Files Conspiracy: Ghostbusters as a primer, though, I started to get excited that this might feel more like an X-Files episode than a team-up cartoon. Imagine a photo-realistic Lone Gunman eerily exploring the impossible modern myth of Michael Zulli’d-out urban monster Ninja Turtles (as seen below!). 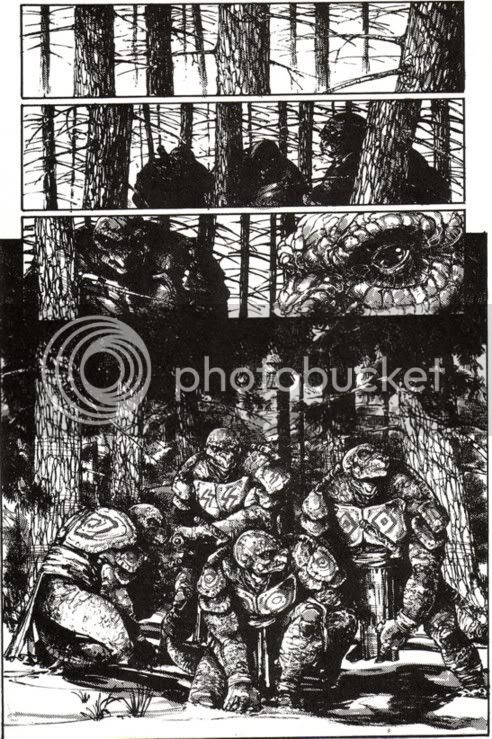 But alas, this was a much more by-the-numbers team-up than I feel the sheer lunacy and audacity of this combination could have inspired. I would have been keen for this creative team to inject a bit of palpable horror similar to Kevin Eastman and Tom Waltz’ Slash redux arc from IDW’s TMNT on-going. I don’t think there was any attempt made for eeriness here. There’s nothing inherently wrong with the cartoon approach (not to put too fine a point on it, but I’m a huge fan of Sholly Fisch’s Scooby Doo Team-Up), I just couldn’t find anything beyond the premise to get excited about.

As a matter of principal, though, I commend IDW’s careful ushering of licensed properties and their mischievous implications of a wider shared universe within all of popular fiction. It’s good work that I agree needs to be done. I’m just not sure there was $4 worth of awesome weirdness in this specific outing.