Do you find me sadistic? You know, I bet I could fry an egg on your head if I wanted to right now. No, Kiddo, I’d like to believe that you’re aware enough, even now, to know there’s nothing sadistic about my actions. Maybe toward those other jokers — but not you. No Kiddo. This moment? This is me at my most masochistic.

Patrick: People often accuse storytellers of being sadistic. How else could they put the characters we love through such torment over and over again? That’s a weirdly archaic question — one that you’d think readers would be over by now, but not caring about characters is a charge that’s still leveled against writers on a nearly constant basis. George R. R. Martin gets an absolute mountain shit for so liberally (and gruesomely) torturing and killing his characters, and Dan Slott spent the last year receiving death threats and fielding questions like “why does Marvel hate Spider-Man?” The not-so-secret secret is that Martin and Slott actually love their characters, and putting them through the wringer probably hurts the author more than the reader could possibly imagine. It’s a sacrifice to behead the noble lord you’ve invented, it’s a sacrifice to override a hero’s good essential nature when you’ve worked so hard to cultivate it. In the world of The Unwritten, where fictions are made reality (or… maybe the other way ’round…), that sadomasochist is right there in the narrative, and he refuses to let the suffering end.

Richie and Lizzie embark on a quest to find/resurrect/do whatever it takes to bring Tom back. They’re taking their marching orders from Tom’s father — the writer Willson Taylor. Wilson directs them to the location of Tommy’s resurrection in the Tommy Taylor novels — Trafalgar Square in London — but it’s not going to be a straightforward trip. Since the end of the world, fictional worlds seem to have cozied up to reality in the most intrusive way possible, and even traversing the landscape means encountering worlds as diverse as ‘urban horror,’ ‘sex fantasy’ and ‘restoration comedy.’ They do find Tom, stumbling out of his bogus journey through literature (as shown in the previous issue — which is fucking amazing, by the way) and into the real world at precisely the location Wilson suggested.

While they’re in London, they get stuck in the kind of shenanigans that only The Unwritten can deliver. That Restoration Comedy comes back to bite our heroes in the ass when they’re beset by the town watch and are about to be hanged. I absolutely adore Lizzie and Tom’s conversation as they try to figure out what genre they’re in, and therefore what genre-conventions to exploit. It’s sort of the perfect play-along-at-home game for a literary nerd like myself. The most beautiful part about it is that, while Lizzie and Tom show their work, the reader can do just as much detective work on their own. We can take the information that Richie wasn’t able to use his vampire powers as a cue that this isn’t a narrative that uses magic, and then we can hazard a guess at the era by evaluating the dress and speech of the native characters. Tom’s got an observation I overlooked: 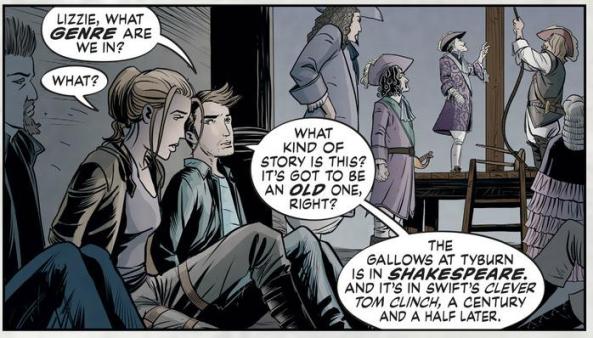 Now, never mind that no other comic book would reward me for reading John Swift, but the fact that author Mike Carey is as comfortable trading in actual literary tropes as he is with tropes from young adult, children’s lit and comic books is positively astounding. Lizzie finally puts it together — she recognizes the archetypes of the Rake and the Fop — and then plays on her expectations of those character types given the genre. It’s the literary equivalent of making the James Bond-esque villain reveal his whole plan to you as you lie trapped in his somehow-flawed death-contraption.

Peter Gross plays a much less innovative role in this issue than he did in the previous, which saw him emulating half a dozen different styles and making them all look good. For as much as this is a writer’s series — and it is possible that only writers of one form or another will like this series — Gross’ art emphasizes the flexibility of the book’s tone. There’s a sequence at the beginning of this issue that I don’t totally understand because I haven’t done a proper read of the whole series. In it, Daniel Armitage, a forgotten character from earlier in the series, encounters a mysterious veiled woman in the woods in his dream. She presents him with a gun, and tells him that he’s “dropped out of the plot,” giving him an advantage. She demands that he shoot her in the head, and when Danny escapes back into the woods, it’s mere moments before he happens upon her again. Okay — that’s a fucked up sequence, and it hinges on the meta-for-the-sake-of-meta nature of this narrative in a more oblique way than we’re used to seeing. Gross’ atmospheric rendering of the dark woods is haunting, but grounded, forcing the reader to reconcile both the fiction and the reality of this largely surreal moment. Also, I’d like to see a more loaded set of panels than these in any other book.

Look at the way her face shows through the vale. Or how about the two panels we see with the gun are also the most intense and bizarre — one on a platter, and the other pointed at her face? Even though Danny was selected for his obscurity, Gross’ commitment to the material renders it as gutwrenching suspense.

Ryan, my friend, do you have any extra insight into that first scene? Either way, did you find it as horrifying as I did? There’s just something so recognizably dream-like about it. Also, what do you make of Wilson’s relationship to the Leviathan? His narration at the beginning of the issue alludes to other, smaller Leviathan-esque creatures — what do you make of those things?

Ryan: Patrick, I agree that the first scene is disturbing and I found the imagery of the veiled face to be the most troubling. It’s a shadowed and expressionless form, devoid of empathy. It reminded me of a statue, unyielding and destined to outlive any man.

The figure, whom we’ve gendered as female, based on her slim figure and pink fingernails, calls the task set forth before David a “gift.” This resonates with greater themes of the issue and the series as a whole. Wilson’s trainings of Tom and of Lizzie were also his gifts. Gifts that emotionally and psychologically warped their childhoods. Like Danny, Tom did not choose or embrace this gift, aside from a desire to please his distant father. Danny is another cog in the machine, or to choose a more apt metaphor, another player in the drama. He does not get to pick his role, or even to bow out before the story is done with him. He must conform to the veiled figure’s desires. She can wait.

Oh jeez, those little Leviathan tadpole thingys. These guys will play a large role in my next nightmare. Perhaps even more upsetting than the image of one of them burrowing into a man’s mouth… never mind: nothing is more upsetting than that. Equally upsetting is that, as Wilson notes “they feed at the place where a story touches a human mind.” The authenticity and power of this connection was established in the previous issue and the damage done by exploiting it is staggering.

Stories are how we understand each other and ourselves. Only through narrative and story can we live beyond our sensory experiences. That’s why the breakdown of the wall between what is real and what could be imagined is so horrifying for me as a reader. Patrick, you suggested that perhaps only writers will like the series and I think that’s a valid point. But, I also appreciate Wilson’s assertion that we are all storytellers through our interactions with one another. People are constantly updating the narrative of their own lives. The story may sound different when told over drinks at a bar, in an intimate moment with a lover, or on the witness stand at a trial. None are necessarily lies, but perhaps a variation least likely to incriminate oneself. Unsolicited legal advice: plead the fifth; perjury is bad. The power of adulthood is gaining control of your story. That’s why I find it so compelling to watch Tom work to do that for himself, while also playing out his father’s plot.

Wilson believes that his life is linked to Leviathan. I’m not sure whether we are supposed to take this as a literal truth, but I’ve started to think of Wilson as a parasitic barnacle connected to the great whale. Richie suggests that Wilson, rather than supplying a savior for the world, brought about the apocalypse by creating Tommy. Richie is deep in a swamp of cynicism here, as one may expect from a vampire in a dystopia consumed by stories, but he may be right. In the real world, we must separate correlation from causation. But if the world is an amalgam of stories and Tommy Taylor’s is a phenomenon, we cannot know what a world without Tommy would be. It’s like that Robert Frost poem that everyone had to memorize in seventh grade and people misinterpret as being an endorsement of subversion. Once you pick a path, you lose the chance to know how things could’ve been different.

Patrick, I think it’s telling that we haven’t mentioned the reunion scene in the issue. As a stand-alone sequence, it’s sweet, but in the context of the greater story, it feels perfunctory. Of course, Tom closes his eyes to savor Lizzie’s embrace and Richie and Tom whip shit while engaging in a man hug. This moment worked much like the repentance of the Restoration Comedy. It’s a beat of the story that both the reader and the characters must enact. 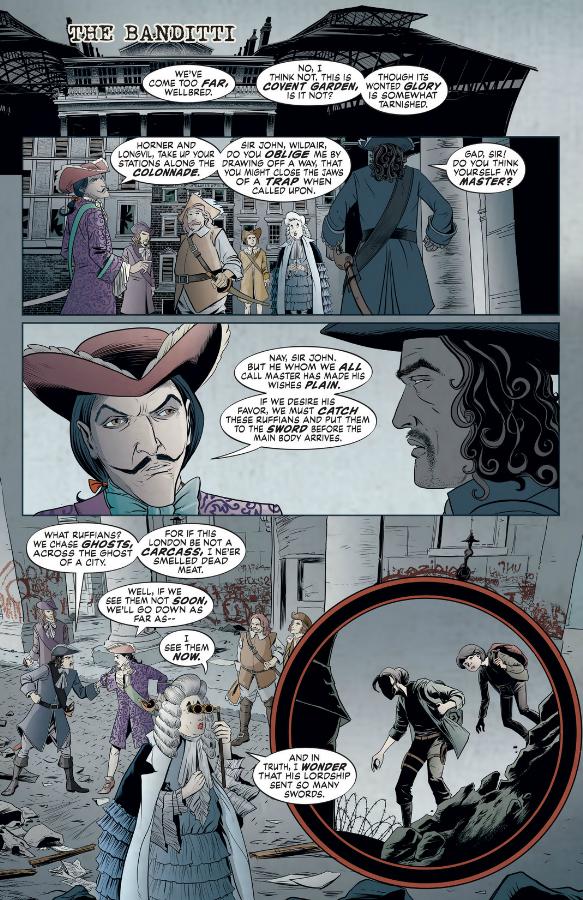 The flow of page eleven  (above) provided a comprehensible setting for our climax, even if in this world the sun is sometimes a monster that will bite if you get too close. First, we get a taste of the dialogue over the silhouettes of the buildings, before a panel of the men in their foppy finery, followed by the image of these men in the modern wasteland, red graffiti littering the walls behind them. The sequence does an excellent job establishing the characters and their reality, before contrasting that with the location where the story will play out. It established an off-kilter vibe for the rest of the scenes with these players.

Patrick, you opened with a discussion of the sadism of storytellers. Carey won’t be dissuading anyone in the storyteller=sadist camp with the way this issue ends. The story certainly seems to throw our heroes into a deeper danger, an oncoming army. An army made up of men from a variety of eras and genres, meaning that the skills Lizzie and Tom demonstrated so well in this story may not help in a world that doesn’t obey the conventions.