Spencer: One of the biggest issues I’ve had with Forever Evil has been trying to figure out just how, exactly, its interpretation of Earth-3 works. Before the reboot Earth-3 was a world of opposites, where all evil characters were good guys and all the good guys were villains, and villains always won, but ever since the Crime Syndicate forced their way onto our world at the end of “Trinity War” writer Geoff Johns has largely shown Earth-3 as a world where everybody is evil, which I haven’t quite been able to wrap my head around up to this point. Johns and David Finch’s Forever Evil 6 has finally helped put things in perspective for me, though, by unmasking the Syndicate’s prisoner and showing us exactly what a hero looks like on Earth-3.

Batman and Lex Luthor lead their ragtag team of villains and anti-heroes into the fallen Justice League satellite in hopes of rescuing Nightwing and taking down the Syndicate (notably, Batman doesn’t argue when Luthor commands the team to kill them). Batman and Luthor find that Grid has strapped Nightwing into an Apokolyptian device called the Murder Machine; when they enter the room it seals and a timer begins counting down on a bomb wired to Nightwing’s heartbeat. With little choice, Luthor seemingly strangles Nightwing to death.

I say seemingly because, as Batman lashes out at Luthor for his actions, Luthor shouts “It’s not too late, you idiot!” I came into this issue fully prepared to rage about the predicted death of Nightwing, and if he indeed did bite it this issue, then I’ll still do my raging, because this event hasn’t given him the spotlight he deserves, but the fact that Luthor seems to have something up his sleeve to save Dick makes me hopeful that we haven’t seen the last of Nightwing, and it also allowed me to focus my attention on what everyone else was up to.

The Crime Syndicate, busy worrying about the tear in the sky, are summoned back to the satellite and take on the team of villains. Black Manta and Captain Cold manage to defeat the Outsider, Johnny Quick and Atomica, but the real problem starts when they free the Syndicate’s prisoner, who immediately murders Johnny and steals his power. 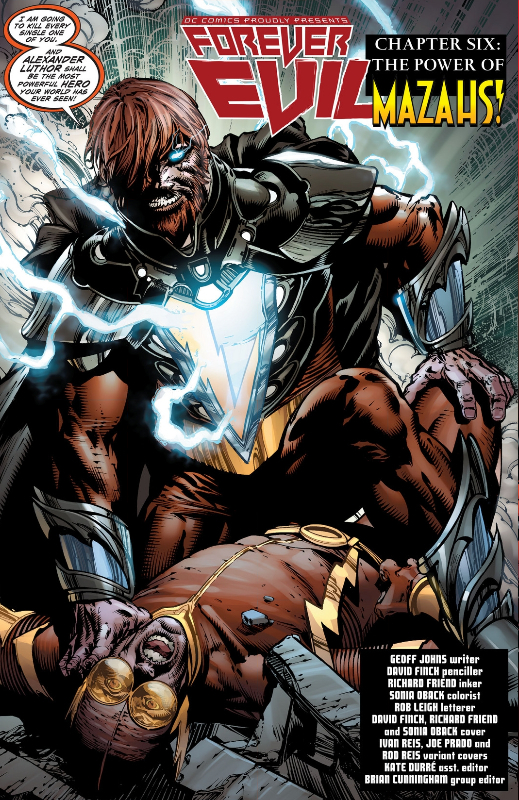 Yes, that’s Alexander Luthor fueled by the power of Shazam Mazahs, and yes, he’s apparently what passes for a hero on Earth-3. Knowing that Earth-3’s greatest hero is also seemingly a madman who slaughters his villains and steals their powers does wonders for finally cementing Johns’ vision of Earth-3 as a world of constant evil in my mind. There is legitimately no “good” on Earth-3, only more evil or less evil.

Still, Luthor’s arrival poses a lot of questions. Some have me intrigued about the answers: for example, how did he gain the power of Mazahs? I’m betting Luthor started out as the genius he’s usually portrayed as and stole the ability from one of the Syndicate members he murdered. Other questions seem to poke holes in the narrative, though: for example, if Luthor is so dangerous, why did the Syndicate bother to bring him along with them at all?

Regardless of the answer, this issue is the most engaged that I’ve been in the story of Forever Evil since it began, and while some of that definitely comes down to Earth-3 finally coming into focus for me, another part of it is due to straight-up catharsis. The Crime Syndicate are such repulsive, irreprehensible characters that it’s been hard to read about them up to now, but seeing Manta and Cold finally give them a taste of their own medicine is incredibly cathartic, albeit still remarkably dark.

I’ve also enjoyed seeing Finch’s artwork evolve; I’ll probably never be the biggest fan of his style, but compared to his work on Justice League of America there’s a marked improvement. I don’t know whether to credit Finch, inker Richard Friend or colorist Sonia Oback, but his work has lost the oppressive, dark tone it used to have that often made his pages gritty and hard to make out. I was most impressed by this two-page spread:

The spectacle of the Syndicate breaking through the windows would work well enough on its own, but I especially enjoy how the image is shrunken down a bit to widescreen proportions, which helps sell this as an important, epic moment, and the glass shattering through the gutters is a fun touch.

I’m still turned-off by Finch’s portrayal of women, though. At least Catwoman’s outfit stayed zippered-up the entire issue, but Finch somehow makes sure to show every female character shoving her butt at the camera at least once. The only reason it isn’t a deal-breaker is because there are only three women in this issue at all, which, when you consider that the book is juggling 19 characters, points to even deeper gender issues than I have time to consider.

My biggest qualm with this issue, though, comes courtesy of Lex Luthor himself: 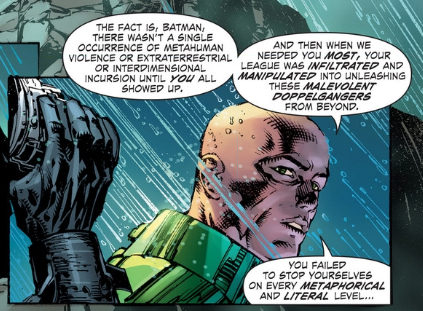 It’s absolutely in character for Lex to make this argument, but the problem is that Lex is right. Johns has not only given us an incompetent Justice League that can’t function as a team even after five years together, but he’s made the villains of the DC Universe more “heroic” than the heroes, and that’s just messed up. The DC Universe has been growing darker and darker for years now, but this is somehow the point where it’s starting to become legitimately upsetting. Heroes appear to be dropping out of vogue again—at least at DC—and that points to issues far beyond what’s happening in one comic book.

Patrick, as you can see, this issue left me a little torn—I enjoyed it, yet didn’t much care for what it stands for.  How did it fare for you?

Patrick: Actually, Spencer, I thought this one was pretty good. I normally shy away from broad statements of quality like that (“Actually pretty good” –Patrick Ehlers, Retcon Punch), but I also think I’m starting to understand what we’re dealing with here in the form of Forever Evil, The Trinity War, Justice League and the like. As these stories veer darker and more anti-heroic, it’s easy to think of them as emblematic of the entire publishing line — after all, the Creative Director is writing these books and all of the heroes feature in these stories. But that’s an artificial darkness, an artificial rejection of traditional heroes. I know, I know: it’s all artificial, blah blah blah. This isn’t me insisting that one thing is canonical and another thing isn’t, but I think it’s safe to say that this darkness, which grows more absurd by the page, is darkness for it’s own sake, and not for some greater purpose.

In fact, the darkness finally ramps up to a level of ridiculous consistency that some of the cornier moves that I made fun of in the past — like Ultraman snorting Kryptonite for energy — suddenly make sense as drops in an insane bucket. Black Manta shanking the shit* out of The Outsider? Captain Cold shattering Johnny Quick’s tibia? Nightwing hooked up to a Murder Machine? MURDER MACHINE, Y’ALL: MURDER MACHINE! This is straight, wacky nonsense, transcending the grimy grind of the rest of the series (and its off-shoots). It’s a little bothersome that it took Johns so damn long to get to this point — Grant Morrison and Frank Quietly managed this kind of lunacy in the first 20 pages of JLA Earth-2 — but it’s fun that we’re there now.

The machine-gun pacing at the end of the issue only intensifies this feeling that the narrative has spiraled way outside of anyone’s control. I don’t know if it’s more evenly distributed in the print version, but the digital frequently puts different scenes on opposite pages. And that action hops back and forth between two scenes that take place in nearly identical rooms and populated with non-intuitive groups of characters. It takes a concerted effort to remember who’s within striking distance of whom. Normally, I’d write that off as bad space work — and it is — but by the end of the issue, it’s all whipped up into an intentionally confusing tornado. Dovetail that with two ticking time-bombs (one literal and one backwards Shazam!) and shit’s just gone crazy.

Also, it’s dumb, but the sky-high brawl between Black Adam and Ultraman is appropriately hyper-dramatic. Everyone’s a sucker for Dark Knight Returns-esque lightning streaking across the sky.

That’s actually sort of the beauty of the whole issue – it make the stupid shit seem fun. Not that there isn’t plenty of stupid shit in the issue. Like when Atomica claims not to be able to penetrate Black Manta’s suit because it’s sealed “on a microscopic level.” Okay, I guess, as long as we’re talking about magic men fly-punching each other, we can believe that there’s a material that’s impenetrable at a subatomic level, but we’ve seen Atomica shrink herself down to ride electrons as they zip through the internet. Electrons. At electron-size, you can move between the spaces within an atom.

So with Johnny Quick, Outsider and Power Ring, we’ve officially got us a body count! I’m less excited to see Ultraman and Super Woman die: they’re awful, but we haven’t seen them be specifically awful for kind of a while. Then there’s Owlman. Do we want to see him die? In a story about unlikely heroes, I just don’t buy him as an unlikely hero, you know what I mean?

*I wanted so badly to make a Breaking Bad joke there, but Spencer just finished season one. Spencer, I won’t spoil anything, but I hope you like shankings!