Patrick: I have a number of teacher-friends, my colleague and responder on this article, Taylor among them. The idiom above is largely bullshit, but it stings enough that I’ve seen links posted on facebook to articles decrying the attitude that it represents. The argument always follows that teaching presents its own specific challenges, distinct from the discipline being taught. (The follow-up argument, naturally, being that teachers are under-valued in our society, but like whatever: we’re all undervalued.) For my money, the hardest thing about teaching has got to be the shifting of priorities, from the betterment of yourself to the betterment of others. When I fail myself — write a bad article, perform as crummy scene, log something incorrectly in QuickBooks — I’m mostly just hurting myself. But when a teacher blows off their duties, there are a bunch of people, children even, that pay the price. Wolverine and the X-Men renumbers itself and zeros in on this burden of responsibility, just who can deal with it and who’s struggling.

This is one of the softer All-New Marvel NOW! number 1s that we’re reading right now. While it’s clearly the beginning of a new arc, this issue relies heavily on the stories from previous issues in Jason Aaron’s Wolverine and the X-Men series, as well as general knowledge of the X-Men’s deep bench of younger characters. Wisely, most of the context we might need to understand the motivations of our characters comes from Battle of the Atom, and one of the more pressing questions raised therein: Quentin Quire becomes the Phoenix?

With that knowledge of the future in-hand, Quentin is given a T.A. job at the Jean Grey School, but provided with very little direction. Why no direction? Well, most of the professors are off doing what they do — Beast is in space, Wolverine’s fighting his way through an interdimensional prison, Storm is… on the phone with Beast… No one has any time to teach the kids! Under Quire’s watchful eye, class devolves into Rockslide fighting some Bamfs, thoroughly trashing the school in the process. 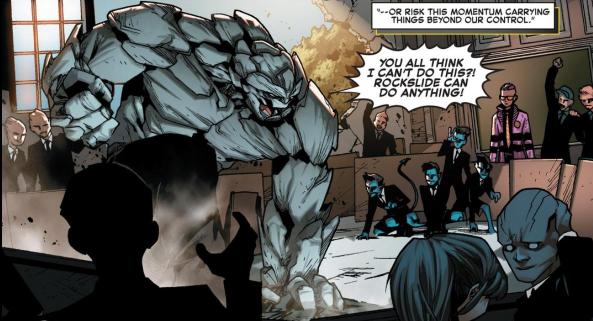 As an easy jump-on point, I don’t know how successful this issue is. Hell, even the idea of Quire becoming the Phoenix in the future hinges on the reader’s understanding of so many different pieces of X-Men lore. It’s a loaded emotional concept, and those of us that have spent some time with Jean Grey can already feel our hearts hurting at the very mention of the P-word. By the issue’s end, the Phoenix insignia is emblazoned across all computer screens — so we’re standing on the brink of an all new Phoenix story.

How effective the looming threat (or promise) of the Phoenix is going to be will determined within these pages, not in previous issues. New series writer Jason Latour acknowledges this upfront with a three-page flashfoward to an apocalyptic hellscape, complete with all manor of future teases. There’s Wolverine’s tombstone, a jacked-up Apocalypse Evan, a Phoenixed Quentin and Idia in full-on superhero mode. Artist Mahmud Asrar renders an almost Terminator 2-level wasteland, giving us a glimpse of just how dire of a future he and Latour are imagining for these characters. 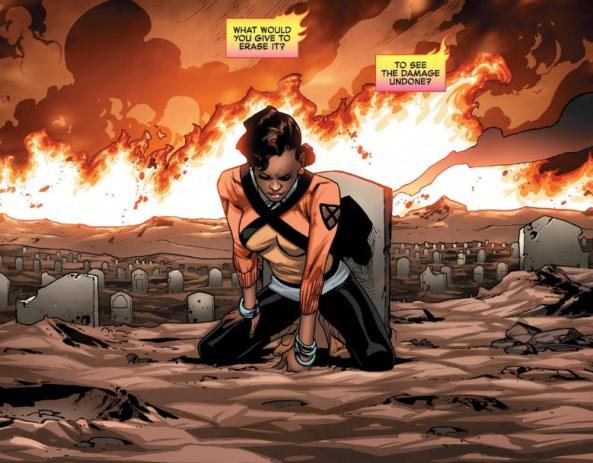 In fact, for as much as this issue appears to be rooted in the past, there’s just as much dread over the future. Quentin himself raises one of the more problematic questions about being privy to these future events: “If the future’s already mapped out, how do you hold anyone responsible for their actions?” We’re seeing some of this same idea playing out in the All-New X-Men / Guardians of the Galaxy crossover The Trial of Jean Grey. It’s not just the past that weighs these characters down, it’s the future.

That’s telling on a meta level as well. This issue introduces some weird ass characters with zeal, pausing just long enough to be like “yeah, yeah, that’s Doop, he’s a mutant, works in the kitchen and talks funny — MOVING ON.” I mean, seriously: Krakoa, Rockslide, Doop, Eye Boy, Fantomex and Bamfs in one issue? The book either assumes a certain familiarity with the past or gleefully acknowledges that you might feel out of your depth without that familiarity. In short, the issue is heavy with the baggage of decades of comic history. But it is also heavy with untold decades of comic future — these characters (or some of them, at any rate) will live on and be reinvented and rebooted and renumbered in perpetuity. Locking Quentin Quire into a timeline where he becomes the Phoenix forces the characters to confront his impending power surge, but it also causes creators to confront his impending importance in the world of X-Men comics. Latour and Asrar might have gone out on a limb in casting Evan, Quentin and Idia as major players in some future scorched-earth drama, but that’s the responsibility they’ve accepted by embracing the future as simply another source for baggage.

Taylor, how did you enjoy this issue? For a book bearing Wolverine’s name on the front, there wasn’t all that much of ol’ Logan, was there? Also, Nature Girl is certainly meant to be an audience surrogate: she’s the reason we get any explanation as to who anyone is, and she’s silent throughout. It’s sorta weird, then, that she has a calming influence on Rockslide, and seemingly all creatures. I’d say that the audience usually acts to whip the characters up into a big dramatic frenzy — that’s what we want to see after all. Maybe she represents a different kind of comic audience, one that just wants to spend time with the characters and that gets stressed out when bad things happen to them.

Taylor: Nature Girl does make for an interesting read. Perhaps she is indeed a representation of a softer side of comics, that focuses less on punches and more on gooey feelings. I’ve always enjoyed issues where you just get to hang out with characters, but I think that enjoyment is born out of the knowledge that such moments can’t last. And I guess that’s what’s sort of interesting about this issue — on the one hand, it does a lot to develop some characters, but at the same time, it throws in some action. It’s hard to say how necessary this action is though. The scenes with Rockslide are fine but the question of why the action is present in the issue is a bit problematic. It gets Quentin in trouble, but couldn’t something more peaceful have as well — like calling a student an asshole in class? I suppose every issue needs a balance of action and exposition, but the action felt forced here.

Rather than a representation of an audience who longs for a quiet and reflective issue, I see Nature Girl as being the antithesis of Quentin. She’s mute, shy, and calming, whereas Quentin is passionate, loud, outspoken. Similarly, their power sets seems to be the opposite of each other. Fire is a purely destructive force, but nature is viewed as that which gives life. The seeds are being planted here (puns!) for what could be an interesting showdown.

Speaking of Quentin, I loved  the work Mahmud Asrar put into making this character come to life in this issue. Most striking is the way he draws Quentin’s facial expressions, which show a surprising range. A great example of this comes when Quentin is being chided for his poor form in teaching which is something he naturally detests. 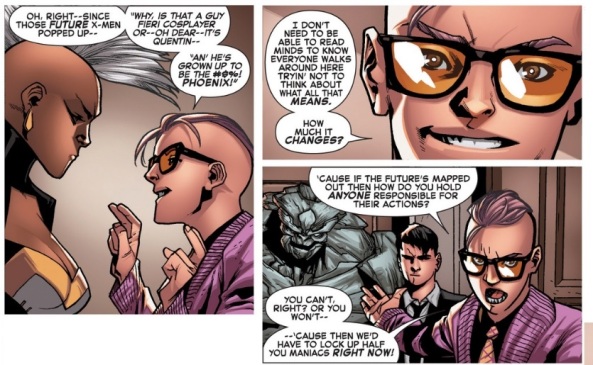 His expression goes from patronizing, to smug, to angry in the space of three panels and yet it seems like a natural progression. Further, each expression makes me want to punch that kind in the face so much! He’s a misunderstood kid, yes, but he’s also too arrogant for his own good. Asrar makes this character attribute palpable and while these are negative aspects of a character, it’s rare to see such expression executed so nicely. There’s a lot of detail on display on Qunetin’s face here and in general throughout the issue. In short, it’s a perfect style for the content of what is kind of a zany issue. 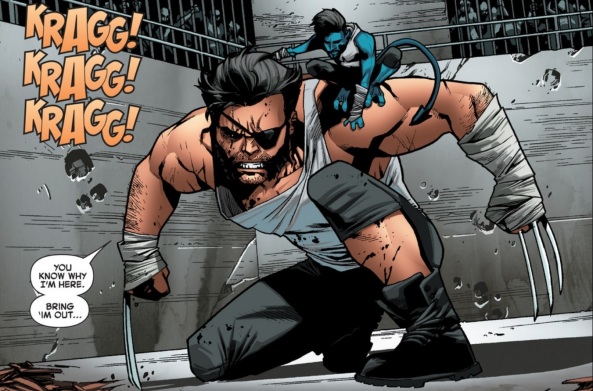 The smash cut titular hero is fantastic. Not only is it a stark contrast to the previous scene but it’s in the middle of splendid and weird fight. Add Wolverine’s helper Bamf and it’s basically solid gold. I think the character of Wolverine, in his decrepit state, is really hitting nothing but home-runs these days. He’s wizened, gruff, and surprisingly full of sound advice. Just a great narrative run for this character in the past six months or so.

6 comments on “Wolverine and the X-Men 1”