Spencer: Hawkeye is consistently one of the most daring comic books on the shelf. That doesn’t necessarily mean it’s always making the biggest, most shocking moves, but it does mean that anything’s fair game when it comes to this book. An issue told from the point of view of the dog? Sure! Killing off a beloved supporting character then spending months and months revisiting the event from every conceivable angle? Why not?! Separating the main characters then dividing up the narrative between them? Seems do-able! Matt Fraction doesn’t shy away from taking risks with Hawkeye, no matter how strange or mundane, and Hawkeye 17 is one of the strangest of all. Fortunately, it’s charming as all get out. Maybe that’s the true legacy of Hawkeye: the risks always pay off.

Remember at the end of Hawkeye 6, when Clint sat down with his neighbor’s kids to watch Christmas Multidenominational Pantheistic All-Inclusive Seasonal cartoons? Well in this issue we actually watch the cartoon ourselves: it’s called “Winter Friends” and it’s about a team of winter guardians who are taken out by “the icon of summertime itself” and have to be rescued by “Steve, the dog with no powers that [they] let hang out with [them] for some reason.” Steve, of course, is a pastiche of Clint himself, and his attempts to save the Winter Friends take him through a dog-ified version of the events of Hawkeye. Even as more and more friends show up to help him, Steve just wants to do everything on his own, but ultimately, it’s all the characters coming together that allow them to vanquish the icon of summertime. This could just lead to some sort of epiphany for Clint, except he’s fallen asleep and missed the whole cartoon.

Like I said, this is a daring issue. It’s a holiday book shipping three months after the holidays; it’s a bizarre diversion coming right on the heels of a horrific cliffhanger; plus, by parodying children’s holiday specials, it runs the risk of being just as juvenile or moralizing as one of those specials. Fortunately, Fraction avoids all these pitfalls. The typical Hawkguy sense of humor pervades every page of the issue and makes sure that the unusual style still appeals to the average fan. 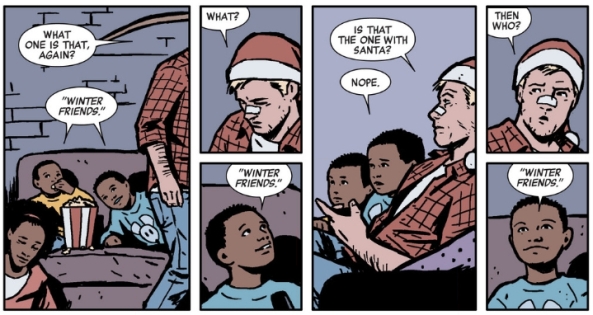 Regular artist David Aja only gets to draw two pages of the issue, but they easily stand up with the best of his work. This whole sequence is gold (and more evidence that Fraction just gets how kids’ minds work); just the expression on the boy’s face in that final panel as he repeats “Winter Friends” yet again slays me. He can’t believe Clint doesn’t get it, and he won’t explain himself further; “Winter Friends” is all you need to know, and Clint’s just gonna have to watch the thing to get it.

Then there’s the jabs at holiday specials and holiday culture in general, with corny songs and the borderline-ridiculous attempts at inclusivity. Chris Eliopoulos — Hawkeye’s regular letterer — does the art for this segment and proves himself a stupendous cartoonist, perfectly capturing the style of Peanuts or Calvin and Hobbes while allowing the needed emotion and action to shine through, despite the bizarre cast of “Winter Friends.” Even the grid-like layouts, black gutters and the rounded edges of the panels emulate the experience of actually watching this thing on a TV.

Ultimately, though, most of the fun comes from seeing Clint’s world transformed into a cartoon. The second-best joke in the issue is the appearance of the “Tracksuit Dingos,” who say “dog” every other word instead of “bro”. The best joke, of course, is the appearance of Clint’s three female friends. 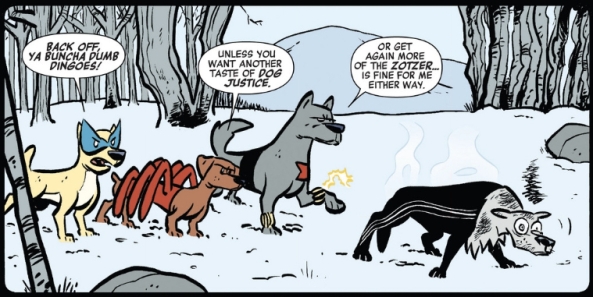 While much of this issue serves as a fun diversion, I think the real meat comes from it allowing us to see Clint from a new angle. While I don’t think there’s any new information about Clint in here that we couldn’t have gotten on our own from previous issues, much of that information is made more explicit than ever. The root of Clint’s insecurity is made quite obvious by the constant references to Steve’s lack of powers and the jokes about why he’s allowed to hang out with the Winter Friends at all. Most people don’t take Steve seriously, and when his friends try to help him, he takes it as pity, lashing out and claiming “I can do it all by myself!”

Steve also gives a speech that echoes the statements Clint made in issue 15, further emphasizing the good intentions and humanity behind Clint/Steve’s doggedness and mistakes. 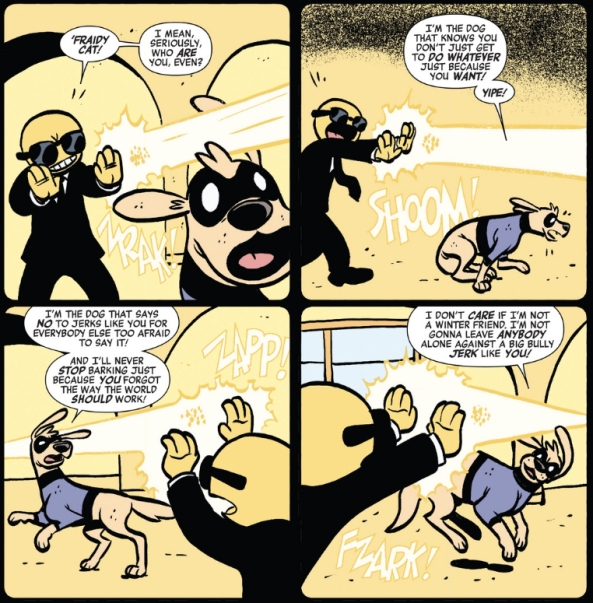 Because this is a holiday special, it comes pre-packed with a moral, and that moral seems to be “we are more powerful as a team than as individuals.” Ultimately, the Winter Friends win because Steve distracts the icon of summer, allowing the other dogs to free them and them all to summon Mother Winter to save the day. Steve couldn’t save the day alone, but for his essential part in the plan, Mother Winter praises him as a “good dog.”

I’d never really considered the root of Clint’s problems to be that he acts alone, but the more I think about it, they more I realize it could very well be true. Clint often acts before thinking, and though he’ll sometimes ask his friends or teammates for help, he usually waits until it’s too late for them to do any good. Maybe Clint could more effectively protect his tenants and fight for what he believes in if he worked harder to put aside his pride and insecurity and work with the people who love him, but for that to happen, first he’d actually have to stay awake long enough to reach the moral.

On the letters page, editor Sana Amanat says that she looks forward to hearing the readers’ interpretations of what they think this issue is about, making me think of this issue more as a “Hawkguy Rorschach test” than anything else; what we get out of it may largely depend on what we’ve already learned from previous issues. So, Patrick, what did you see when you read this issue?

Patrick: I actually saw a little more Bloom County or Pogo in Eliopoulos’ art than I saw Calvin and Hobbes (Waterson favors acute angles, even when drawing something as fuzzy and round as Hobbes’ head). But other than that, I’d say your reading is dead-on: there are an awful lot of parallels between Clint’s life and the life of our sorta-hero Steve. It’s obviously very temping to make those connections between the characters, but I’d also argue that Winter Friends is an easy comparison to Hawkeye (the book, not the dude). Especially as we’re seeing increasing bloat of  storytelling in comics, Hawkeye has always excelled and delivering a self-contained, stylish story, with a proper beginning, middle and end. Just like issue 1 of Hawkeye, this episode (…or special, or whatever it is) tells a simple, effective story, complete with an emotionally honest journey for the main character. In fact, Winter Friends is full of Fraction’s sense of humor, and there are enough jokes that are not at the expense of the genre being lampooned that the issue’s attitude towards Holiday Specials feels more like gentle ribbing than skewering.

I suspect that Amanat’s note at the end of the issue is meant to get out ahead of critics of this issue. Saying that she wants to know what the readers think this issue is about is a savvy way of planting the idea that this issue is “about” something. While readers of Hawkeye are — by now — used to having our thirst for resolution go unaddressed for months at a time, there was always the vague notion that the stories Fraction presented were pieces of a single narrative whole. That is not true of this issue — Winter Friends will not be coming back, and the adventures of Steve and Lilly will have no bearing on Clint and Katie. Like, even in the meta-narrative that bookends the Holiday Special, we’re flashed back to the events of a dozen issues previous. So, it’s not like we’re getting that recursive storytelling that we did in the wake of Grills’ death.

Then what do we have? Future issues will either bear this theory out or reject it, but I believe we’re starting to see the tone of Hawkeye deconstructed and reconstituted. Spencer’s example of the Dingo’s saying “dog” instead of “bro” is a pretty good place to start. Our Tracksuit Bros sure do use the word a lot, but the Dingo routinely drop it three or four times in a sentence. I loved the way Fraction had identified this very real linguistic tick, something characteristic of Eastern European immigrants, and spun it into a character-defining joke. It’s become emblematic: “Bro” in the right font means Matt Fraction’s Hawkeye. In this issue, Fraction invents a similar tick and multiplies it by a billion, and that gives us delightfully obtuse sentences like “Dog, those dogs are dead, dogs,” “Dog, what’d we ever do to you dog?” and my personal favorite “Dog, you just dog, dog.”

It might seems like a trivial thing to explore — especially considering that Hawkeye was expressing its own tone quite nicely already — but the moral of the Winter Friends applies so well to Clint. He’s just got such a hard time making those lessons work in his life. Naturally, that’s what makes Clint Barton such a compelling character — he’s flawed in a way these simpler narratives (like Winter Friends) cannot be. Steve’s like a bizarro version of Clint from a dimension where he actually learns and grows.

Oof! That sounds very gloomy! Certainly too gloomy for an issue that includes a Hanukkah Cat named Menorable. Okay, just to get us back in the right headspace to discuss this thing further in the comments, I’ll share one of my favorite panels. 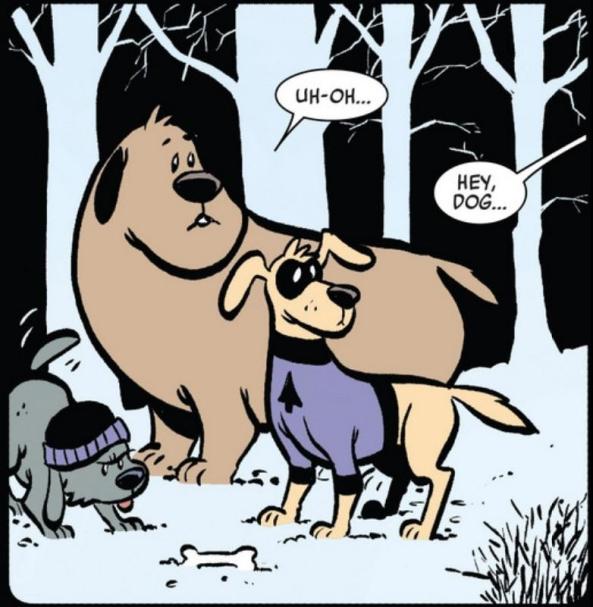 They don’t spend all that much time palling around together, but I love seeing the Clint, Kate and Barney analogues all at once. This is also one of the rare panels where we can clearly make out the arrow on Steve’s chest. Dog, that dog’s wearing the wrong kind of arrow, dog!