Patrick: I don’t like the way James Robinson writes dialogue. Don’t like it. He invents unnecessarily awkward contractions; his characters use cliché superhero rhetoric; there are frequent problems with subject-verb agreement; and he’ll mix up countable and uncountable objects (using words like “fewer” and “less” incorrectly). I can accept some of these “mistakes” as affectations of Robinson’s characters: lord knows Ben Grimm and Johnny Storm aren’t going to edit the words that come out of their mouths. But dialogue is like 5% of a comic, right? As long as the art and incident are compelling, a few glaringly stupid sentences shouldn’t bother me, right? RIGHT!?

Manhattan is under attack! Y’know… again… An explosion at the Baxter Building signals the arrival of an army of interdimensional rock-bug-men. Franklin recognizes these monsters: they’re from the universe he created. Certain that no one else is going to have the smarts to deal with the invasion, Reed mobilizes his family in a cool new jet! Once they’re on the front lines, The Fantastic Four realize that every available cape is already duking it out on the streets, and measures more drastic are required. Reed retires to his lab, where he confides in the reader that he has been experimenting with gateways to Franklin’s world. He sciences up a solution in the form of a Human-Torch-Powered Bomb. Johnny takes the HTPB and sets it off high in the sky over Manhattan, felling the beasts and rendering Johnny powerless.

I know I’ll never be able to keep up with the Smartest Man in the Marvel Universe, but it is discouraging to see him apply that intelligence so generically. Reed’s explanation of this bomb — and how it will work — amounts to little more than “It’s from the negative zone, so… IT JUST WILL OKAY!?” Reed knows enough about the invaders to identify “unique genetic composition” (don’t think about that too hard — we’re all unique genetic compositions), but can’t elaborate on what that means. I’m tempted to draw a comparison to Fin Fang Foom, who Reed also identified as somehow different on a cellular or genetic level, but when Dr. Richards mentions FFF, it’s only to remind Johnny that hitting dudes with fire is cool. 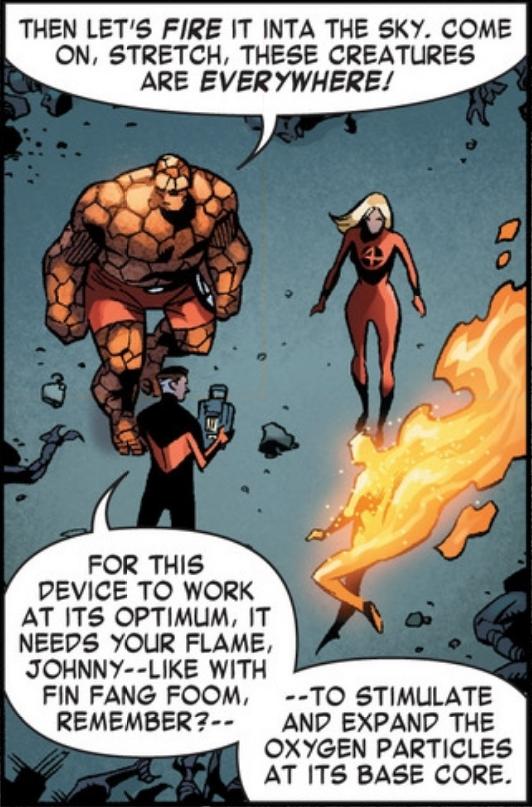 To me, it’s fishy that Reed designed a bomb that requires his brother-in-law to set it off with his superpowers. I mean, it’s a bomb — those things are pretty good at generating ridiculous amounts of heat and energy. So why bother putting Johnny in harm’s way at all? I’m calling bullshit on that choice right now — and this is where my rant from the beginning of this piece comes into play. I don’t have the most faith in writer James Robinson, so when I encounter a question like this, my default assumption is that Robinson is being stupid and not that Reed is being manipulative. I pose the question to Drew — and to anyone that wants to fight me in the comments — am I being unfair? Even Reed’s explanation reads as vapid, with the use of awkward phrases like “at its optimum” and “base core.” That just seems dumb, right?

Of course, it’s also possible that the world of the Fantastic Four is just fundamentally dumb, and Robinson is playing into that expectation. I mentioned the family’s cool new plane with a facetious enthusiasm in my summary, but there is something incredibly interesting about its functionality. The vehicle breaks up into four separate vehicles so our heroes can split up when need be. Right before they do this, Johnny points out that he’s just going to abandon his. Why wouldn’t he? Dude can fly and is essentially invulnerable when he’s a fire man anyway. That kind of invention suits the tone of classic Fantastic Four perfectly: it’s a little cheesy, mostly unnecessary, and would make a great toy. By allowing one of the characters to simply reject the utility of the plane, Robinson might be acknowledging that he’s ready to jettison the series’ former wackiness.

Artist Leonard Kirk also seems to have abandoned many of the softer edges that usually characterize the Richards. An early drawing of Dragon Man huddled together with the children of the Future Foundation shows you everything you need to know about the tone of this book. 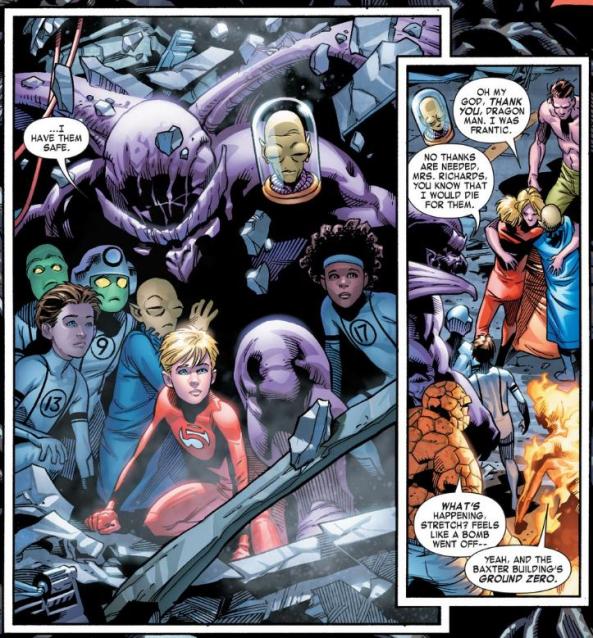 I cropped it kind of tight, so maybe you can’t see, but the gutters of this page are filled with the vicious faces of the invading horde. All of the kids’ faces are so stern, to say nothing of the brooding posture of Dragon Man. Even his dialogue “you know that I would die for them” is needlessly dark and overwrought. The tone of the piece is dire, which is fundamentally at odds with the Fantastic Four universe.

There’s a moment where Thing launches into battle, and instead of quipping his tired old “It’s clobberin’ time!” he lands in the midst of throngs of bugmen and taunts them:

This is a willing subversion of our expectations. Instead of being the big goofy oaf that thrills the readers with his predictable catch-phrase, Ben Grimm is a bad-ass, invincible warrior with enough ironic detachment to remove himself from his own battle cry. Drew, I’m suggesting that this series suffers from that detachment, but I could see someone just as easily making the opposite argument. How do you feel about the tone this series strikes?

Drew: I wish I could offer a strong counterpoint to the arguments you raise here, Patrick, but honestly, I think you might still be giving Robinson too much credit. I wouldn’t say he’s willfully subverting our expectations so much as he’s just limply acknowledging them. Sure, he’s taking advantage of the fact that we know a catch-phrase that has been repeated ad nauseam for the past 50 years, but that’s basically the limit of what he’s doing. He’s not revealing anything cool about the catchphrase or Ben or our expectations. Swap out “It’s clobberin’ time” for the line as written, and the scene reads exactly the same. If anything, I would say it’s this interchangeable blandness that forms Robinson’s thesis here.

Patrick, I’m glad you brought up the genericness of Reed’s solution here. When faced with what he describes as “an impossibility,” he comes up with some hand-wavingly nonsensical solution. That is, he negates negative sci-fi mumbo jumbo with positive sci-fi mumbo jumbo, yielding an issue with a net of exactly zero. Except, of course, for Johnny’s apparent powerlessness, which as Patrick already pointed out, is contrived beyond excuse.

I might be willing to play along if I trusted Robinson to do anything interesting with the idea of a powerless Johnny, but honestly, I’m not even particularly invested in the stakes. If impossible problems can be solved in a matter of minutes by throwing together a nonsense bomb, there’s literally nothing Robinson could cook up that would scare me. Of course Reed will be able to come up with a solution whenever it’s convenient. Hell, I’m not even worried about the cost of that solution, since it will likely feel just as tacked-on and just as imminently solvable as this one does.

So, great, in two short issues, Robinson has robbed Fantastic Four of any dramatic potential it might have had. Becoming too powerful is a going concern in superhero comics, and Robinson has gleefully blown past that line in hopes that we might worry for Johnny out of pure habit. Don’t get me wrong — I understand that some suspension of disbelief is required of any superhero comic (of course Superman is going to get out of this jam) — I just can’t see Robinson coming up with a solution that is more satisfying than “because the Fantastic Four always wins.” The difference between the problems Reed can solve and the ones he can’t is entirely arbitrary, reeking of all the hackneyed laziness of dramatic necessity.

The cherry on top is the issue’s title — “The Fall of the Fantastic Four: Part 2” — which dutifully reminds us of that past-tense narration that Sue gave in the first issue. Robinson is keen to remind us of how important this story is, largely because nothing here is actually that interesting. It’s a crutch designed to prop up a boring beginning that mostly just reveals how tired the storytelling here is going to be. I already know that they’re going to fall — can’t we just skip to the part where I don’t know what’s going to happen next?