Spencer: Villains aren’t exactly known for their teamwork. Sure, they team up all the time, but it rarely lasts and never ends well; egos get wounded, agendas clash, and varying levels of morality get in the way. Just look at the Crime Syndicate over in Forever Evil proper; they’ve been keeping secrets and plotting against each other from the moment they reached our Earth, likely even longer. The only group of villains who have stuck it out for the long haul are the Rogues of Central City. What makes them different? Brian Buccellato and Scott Hepburn’s Forever Evil: Rogues Rebellion 6 implies that it may just be because the Rogues understand the way the world works better than most villains.

Mirror Master, Weather Wizard, and the Trickster are surrounded by a massive group of Syndicate enforcers. Things look bleak until the Pied Piper shows up, abandoning his post protecting Lisa in order to save the people she cares about. Piper turns the tide for a while, but the Rogues are again quickly overwhelmed until the music from Piper’s flute reaches Lisa. Glider awakens from her coma and comes to the rescue; her arrival restores the Rogues’ confidence and helps Scudder regain control of his mirror powers. The Rogues combine their abilities, banish their opponents from Central City, and receive adulation from its citizens. All in a day’s work, right?

Back when the first issue of this series dropped, we debated why the Rogues had their moral code and why they’d refuse to go along with the Syndicate’s domination plan. I mean, even if they don’t want to take over the world, why rock the boat when the only alternative seems to be death? 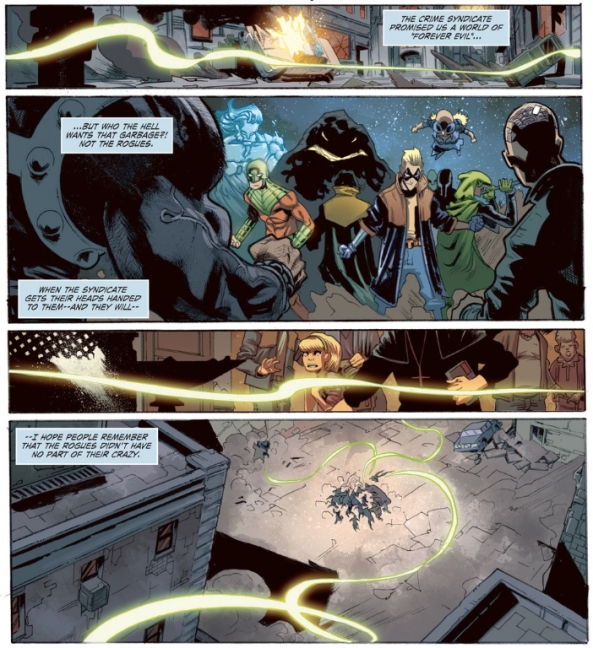 That’s why. The Rogues understand what few villains do — they understand that in the world of DC Comics, bad guys always lose. Mirror Master has the utmost confidence that the Syndicate will be defeated, and the Rogues don’t want to get involved with criminals too dumb to realize that their plans are unsustainable.

That sets the Rogues apart from most villains, but being an outsider no matter where they are seems to be a requirement for being a Rogue anyway; too bad to be heroes but too good to hang with the Syndicate, all the Rogues have are each other, and this has forged bonds that may be tested sometimes — like when Weather Wizard nearly left the group last issue — but will never truly be severed. Even Pied Piper, who left the group to date a cop and become a vigilante, still has fond memories of being a Rogue. It’s easy to see why.

I can’t believe I’m actually saying this, but the Rogues seem to foster a nurturing environment within their ranks, as long as you follow their rules of course (like not dating, ew, a cop, Hartley). Yeah, that’s not the best kind of acceptance, but for a bunch of outcasts like the Rogues it’s an essential lifeline, probably the only one they’ve ever had.

All this leads to those last triumphant pages, as the Rogues come together, save the Gem Cities, and are lauded by the crowds. The Rogues may be notorious criminals, but for now their sense of morality and family have made them heroes. It’s a surprisingly feel-good ending for this group of underdogs, but after everything they’ve been through in the last six issues, they’ve certainly earned it.

The mentions of Captain Cold on the last page intrigue me though. Scudder promises Len that if he needs help the Rogues will be there, that they’re a family, but as we’ve seen in solicits (again, SPOILER ALERT), Cold will be joining the Justice League after Forever Evil runs its course. Piper’s story proves that if there’s one thing the Rogues don’t like, it’s commiserating with the law — will Cold burn his bridges with the Rogues by joining the League? I can’t wait to find out, though at this point I’m just chomping at the bit for any future Rogues appearances.

So this issue definitely works on a character level, but how does the action hold up? After all, this series has largely been defined by its momentum and fight scenes, and Buccellato and Hepburn don’t fail in that respect either. The combination move used to banish Grodd and the other villains at the end is just the kind of brilliant use of superpowers that I like to see in my comics, and the whole issue’s filled with fun little moments like that — my favorite is when Scudder sticks his arm through a reflection to shoot Parasite in the back of the head in the opening spread. Still, it’s Hepburn who ultimately brings all this to life in a most bombastic fashion. 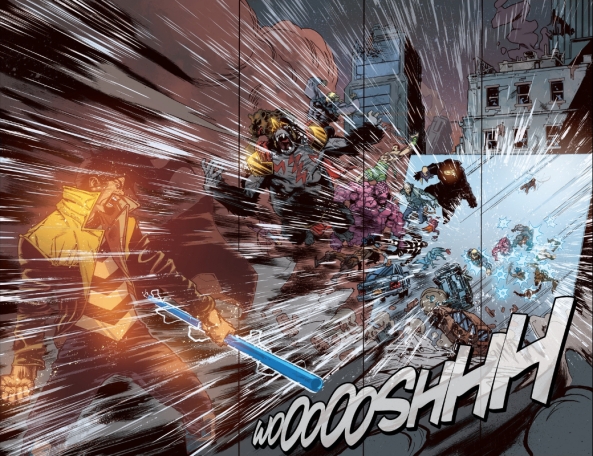 I love everything about this spread. There’s the big stuff, of course, like the way Hepburn uses Marco’s expression and the wind and debris and pretty much every aspect of the page to sell us on the windstorm, but it’s the tiny details that make this page extraordinary. I appreciate the attention to detail in how the smaller, weaker villains are getting blown into the mirror first while the larger, stronger villains are still resisting. The way the spread is broken into a few different panels is aces too; notice how Marco’s arm overlaps the borders — indicating his strong position — but the borders cut through the villains who have completely lost their grip. Only Grodd straddles the fence; his left arm overlaps the border as he struggles against the windstorm, but his right is cut through by the border, showing us that King Grodd too will ultimately fail. Awesome stuff!

Patrick, I think this is a strong ending to what is easily the best part of the Forever Evil crossover; how about you? And hey, what about poor Heatwave? I kept waiting for him to return every time I turned the page — do you think we’ll ever see him again?

Patrick: I know, right! Seeing those Force Ghosts on the last page threw me for a little bit of a loop. I really like Mick, and I would have thought for sure that he’d be clawing his way into that final brawl somehow. We can always take comfort in the fact that Lenny’s Force Ghost was there too — it’s doesn’t necessarily mean the characters are dead, just that they’re absent. And, hell, in a medium like superhero comics, what’s the goddamned difference?

Spencer’s totally right to highlight just how strange the tone of this finale is. The series, as a whole, has been fun and supportive and all of those things from issue 1, but this might be the first time that the warm fuzzies are being rewarded so directly. The narration that overlay’s Hartley’s coming out to the Rogues might seem unnecessary — borderline irrelevant — to the big brawl at the end of the issue, but that’s precisely the point. Buccellato and Hepburn, no matter the setting, want to tell a deep, nuanced character story. Spencer, I read Sam’s monologue a little bit differently that you did: while you see the Rogues expressing their values against the Syndicate, I see Buccellato expresses his values against Geoff Johns.

The Crime Syndicate promised us a world of “Forever Evil”… but who the hell wants that garbage!? Not the Rogues!

“Forever Evil” is in quotes there, but it may as well be italicized, with an asterisk next to it and an editor’s note explaining that Forever Evil is the name series we’re currently reading. As far as editorial mandates go, almost no one has been able to deal with Forever Evil in a compelling way, with the possible exception on the event’s architect, Johns himself. Between sidelining the heroes, and the oppressively bleak tone, why DC would pursue this kind of story is sorta baffling. I’m sure Forever Evil has its supporters, but around Retcon Punch HQ, the reaction has largely been one of exhaustion, boredom and even revulsion. I’ve watched our DC pull list shrink and shrink and shrink since September, and that’s so heartbreaking to me. But in the words of Mirror Master: “who the hell wants that garbage?”

The ending, and this beautifully accepting story from Hartley’s past couched within the narrative, are there to remind us what’s really important about our heroes: namely, that we love them. We don’t love Professor Pyg — he’s a goddamned maniac — but we can love the Rogues. Buccellato doesn’t have to change the fundamental nature of these characters to tell a story of them navigating Forever Evil, but it is interesting to note how quickly it becomes a fish-out-of-water story. The Flash is famously more lighthearted and fun than many of its peers in the New 52, with a persistent eye for meta-commentary, and I believe that’s the energy we’re feeling at the end of Rogue’s Rebellion. It’s an indictment of these end-of-the-world / disaster-porn / villain-porn depression-fests. What better way to pull me out of my “wait, did Lex Luthor just kill Nightwing?” funk than the final act return of Glider? 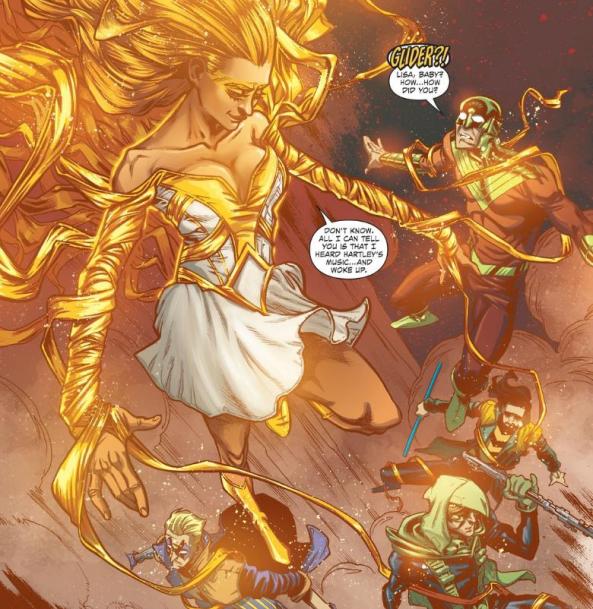 Hepburn might be drawing a bustier Glider than I remember, but it’s a minor quibble. The moment sings with all the colorful glory that the Rogues bring to the page. To top it all off, this moment simply heralds the coming of an act of teamwork. It is a simple, simple lesson — work together and you can achieve more than you would on your own — but it’s one that finds emotional traction here by being the sole sincere lesson in a sea of pointless griminess.

As the Rogues are dusting themselves off after the battle, Trickster remarks “Hells yeah! We won!” to which Mirror Master replies “I don’t know Axel, doesn’t feel like winning.” Hepburn throws us a wide shot, the devastation of Central City underlining Sam’s point. 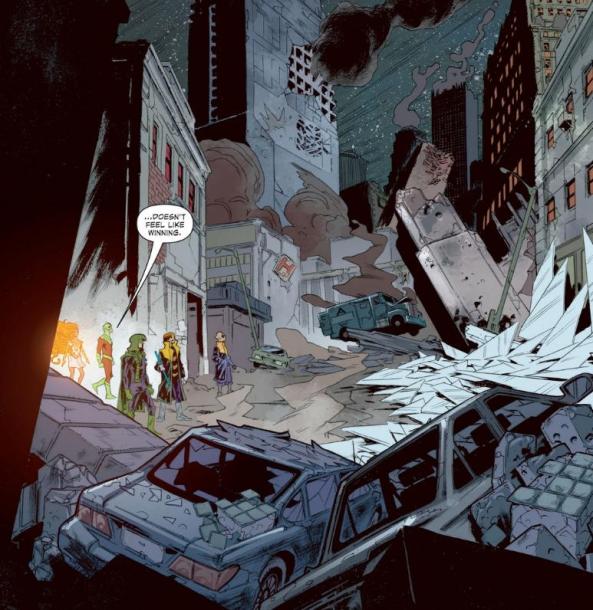 This is the state of the New 52. Even though we’re through it (…well, almost — the final issue of Forever Evil was delayed SEVEN WEEKS), but there’s going to be a lot of clean up to do before it resembles the thing we love.