Welcome to Gotham City. It has the potential to be great…for the both of us. It’s a new start.

Drew: Two figures arrive in the big city for the first time. It’s the start of many a classic story of city life — including this issue — but it also accurately describes Manapul and Buccellato’s “move” to Gotham. After a stellar run on The Flash (ha), Manapul and Buccellato have brought their signature meta-commentary to DC’s namesake, opening with the quote above. The line is not necessarily spoken — it could plausibly be said by Elena or Annie Aguila (the two figures we see arriving in Gotham), but is rather explicitly not represented as dialogue, or even internal monologue — there’s no speech balloon, no voiceover box, not even a quotation mark, suggesting that this really is the creators speaking directly to the audience. It’s a bold move, but exactly the kind that gives me confidence that this does indeed have the potential to be great. 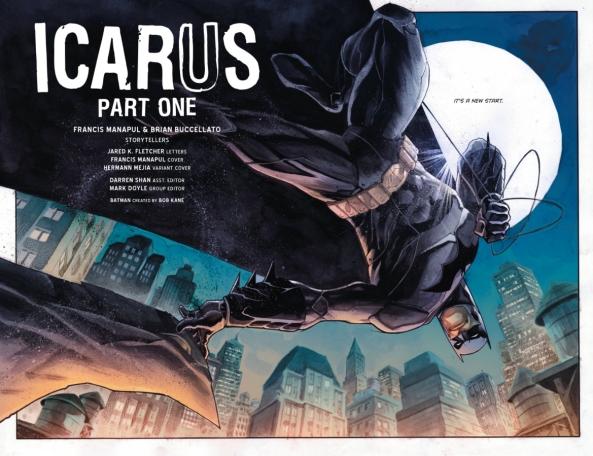 After that prologue, the issue proper follows two separate threads, corresponding to Bruce’s life in and out of the cowl. As Batman, he’s hunting down drug dealers, who are both enslaving kids as runners, and slinging the deadly “Icarus” Manapul and Buccellato introduced back in Flash 25. Only, these particular dealers are also being hunted by a biker gang they ripped off, and the gang manages to get away with one of the dealers. Meanwhile, Bruce agrees to not develop the East End properties he owns in favor of Elena Aguila’s plan to restore the neighborhood, rather than raze it. These threads smash together when Elena arrives on Bruce’s doorstep, literally burnt out from the combustive effects of Icarus.

There are world-building elements baked into these threads — the drug kingpin takes his nickname, the Squid, in the typically literal Gotham fashion, and a corrupt politician is paid off to make sure Bruce decides to develop his property, after all — but everything we need to know about this issue is contained in that image. Bruce struggles (perhaps futilely) to save an innocent woman. It’s a tragic image, immediately calling to mind the Pietà, but the welcome mat makes it clear that this is right at home for Bruce.

Or is that Manapul and Buccellato reiterating their welcome from the issue’s prologue? Ultimately, it may be both — a kind of “welcome to Bruce’s world as we see it.” It’s an alluring statement of purpose, one that doubles as an invitation to discover Gotham along with them. They clearly have their vision of Gotham — between the action in Chinatown and all the talk about the East End, Manapul and Buccellato are surprisingly specific and colorful in their approach — and I can’t wait to see how they fill in what they’ve sketched out here.

Speaking of sketches and color, I would be remiss if I failed to mention the art. It’s been four months since we saw Manapul and Buccelato working together, and it’s great to see them back at it. The panels I’ve posted above speak to how well their style fits Gotham. This team is so adept at crafting breathtaking images (and indeed, every panel is gorgeous), it’s easy to overlook how skillfully this issue is laid out. Manapul directs our eyes around the page with assuredness, taking full advantage of the medium’s ability to depth, motion, and time. Each page is chock full of these touches, but I suppose my favorite comes from the chase sequence.

This kind of paneled-but-continuous image was Manapul’s bread and butter for representing Barry’s speed in The Flash, but it works brilliantly here to establish the space of Gotham’s Chinatown. It works both as a single image and as a sequence, inviting us to loop back to reexamine each panel once we’ve seen them all. It also brilliantly asserts Bruce’s dominance by popping him out of the panels, both signifying his strength and permanence, as well as creating a thrillingly dynamic image. Not to be outdone, Buccellato delivers absolutely gorgeous colors here, playing the cool blues of Jonny’s hoodie on the left against the yellows and oranges of the explosion on the right.

Suffice it to say, I loved this issue. It’s relatively thin on plot, but there’s more than enough subtext to keep me thinking long after I put the issue down. It’s everything I hoped it would be, and I can’t wait to see where this team takes it next. Scott! You’ve long been a fan of Manapul and Buccellato, so I suspect you’re on board too, but consider this: maybe the prologue was actually referring to the two of us writing this review. No pressure.

Scott: I’m not so sure that’s what it’s referring to, but indeed this is a new start for us, Drew. Way back in September of 2012, some 19 months ago now, the two of us wrote about Detective Comics 0. That was my very first post here at Retcon. That issue wasn’t very good, and the series was subsequently dropped from our pull list. Still, Detective Comics has held a special place in my heart, so it’s fortuitous that my favorite creative team is now at the helm. Needless to say, I’m pretty jazzed about this title right now. This is Detective Comics for crying out loud, it should be great. With Manapul and Buccellato I’m not hoping for greatness though, I’m expecting it.

I was very curious about how these guys would adjust from drawing The Flash to drawing Batman. So far, I’m very pleased with the results. What I’m realizing is that the two characters are somewhat similar, at least tactically — they’re both masters of surprise. Of course, they achieve this through very different means. The Flash has the Speed Force; he can appear in, for lack of a better word, a flash. His arrival is typically signified by a streaking red blur across the page. That blur became his calling card, a symbol of the intimidating notion that this man, invisible to the naked eye, is closing in, and he’s utterly inescapable.

Batman has to be sneakier. We only see him in the batsuit for one scene in this issue, but it’s already pretty clear what this title’s calling card will be: The Bat in the Background. 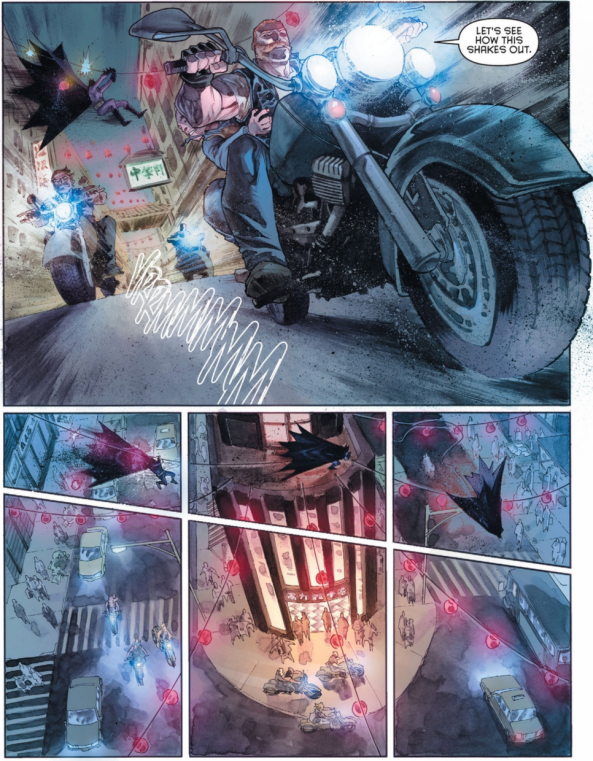 No one sees Batman coming. When he finally does ambush those bikers, they’re just as surprised as they would’ve been had The Flash run in out of nowhere. The difference — and the reason you just gotta love Batman — is that he really earns the surprise. We see him every step of the way, lurking just out of view, working his ass off to outsmart those criminals and maintain the illusion that he is more than just a man. Because of his efforts, the mythos of “Batman” is every bit as powerful as the Speed Force.

I can already see that Manapul and Buccellato are bringing every bit of the artistic creativity they showed on The Flash with them to this title, and that is very good news. Like Drew said, there isn’t a whole lot of plot to discuss yet, but we’re very early in the establishing process. If that’s still the case a few issues from now, then I might be concerned. For now, I’m just excited that Detective Comics is no longer merely a name I associate with my first Retcon post; it’s a book I can’t wait to read.