Patrick: I can’t think of a superhero with a more troubling psychological origin story than Frank Castle. The circumstances are as cliche as they come: Frank’s family is murdered, driving him to take revenge on those responsible. But Frank’s able to abstract that responsibility and extend it to All Criminals. Very pointedly, he is not an agent of justice, and he’s not looking to make anything right — his goals and his ideology are so neatly wrapped up in his code name. Punisher. Obviously, his approach requires a horrifically oversimplified view of criminals, there’s no room for mercy or subtlety. But that also means there’s no room for complication: Frank’s MO is too pure for corruption. The world around Punisher isn’t so simple, and as issue four simultaneously focuses in Frank’s character and broadens out to illuminate his world, it’s clear that he’s up against threats on a scale totally inappropriate for a street-level executioner.

The bulk of this issue depicts Frank’s miraculous escape from Dos Soles and the kind of torture only an electrically themed supervillain can inflict. Frank’s got some experience with this: evidently, he once used the same(ish) method to extract information from… “a guy” back when he was on active duty. The frustrating genericness of “a guy” notwithstanding, it’s interesting that Nathan Edmondson so specifically makes the choice to inform the reader that Frank has used these tactics himself. It’s hard to feel too bad for the guy, when he’s casually like “oh sure, I’ve done this before.” That actually summarizes my view of the character pretty well: it’s hard to worry about whatever danger Punisher is in when he himself is guilty of so much murder and mayhem.

The torture continues, but it’s not totally clear why. Dos Soles eggs Electro on by saying that he wants to make Frank remember all the enemies he’s made, while Electro seems keenly aware of electricity’s effect on memory. There’s an immediate tension between “remember who you are!” and “your memory will fail.” Edmondson and artist Mitch Gerads show a handful of Frank’s peaceful memories as they’re fried right out of his mind. Not only are the edges of these memories softened, but the color palette that Gerads invokes for these happier times in unique in the issue. Specifically, the warmer yellows and greens stand in bold opposition to the cool blues of these sequence in the school. These are incongruously happy memories, seemingly out of place in the Punisher’s narrative.

It’s hard to say exactly what’s happening to these memories — we see two nearly identical scenes, both of which end with a panel overtaken with blue electricity. Are these moments being Eternal Sunshine of the Spotless Minded out of Frank’s memory? Or is his connection to this transformative moment so powerful that he’s able to keep it no matter how much his synapses are fried? Ultimately, it doesn’t matter. Frank launches into a monologue that’s so vague on details that the abstraction makes his quest for unending revenge starts to sound insane. He states that he wants “to emasculate evil,” which reads as totally crazy to me. I think it’s important that he never addresses the source of his anger — you’ll notice that Frank never mentions a wife or kids, we get all of that visually — so he’s left with a loss that’s unburdened with specifics.

Of course, Frank’s able to free himself and escape the school in a typically explosive getaway. He hooks back up with his friends only long enough to tell them all that he’s going to take care of the Dos Soles / Electro situation on his own. All along the periphery of this issue, little wrinkles start popping up, threatening to complicate Frank’s straightforward goals. There are the Howling Commandos, a mention of Sidewinder, A.I.M., and whoever’s doing this:

That could well be the aforementioned Commandos, but who knows? The end of the issue blows everything out even further until we see that A.I.M. is working with Domino, the probability-based mutant. It’s a kitchen-sink approach to conflict, and the reader is offered very few clues as to what exactly is going on or who is working for whom. Suffice to say that Frank’s in way over his head, but staunchly refuses to call in the kind of back-up we all assume he has access to. But that would require the character to trade in alliances and deals and relationships. That’s not what Punisher does: Punisher punishes.

All of which makes me wonder just how wild the intrigue machine will get. There is something oddly charming about the plot thickening and Frank’s only response being “well, I better go back out and try to kill the bad guys again.” It makes his dogged devotion to punishment almost charming in its simplicity. The question I’m still struggling with — and I’ll pose it to you too, Taylor — does the simplicity of Frank’s mission make him a stronger character or a weaker one?

Taylor: To answer your question, Patrick, I’ll have to give you a little rundown of my history with the Punisher. In high school and the summers in between college, my friend Ethan and I enjoyed renting and watching movies on the weekends. We usually watched action movies which in retrospect were bad, silly, and frequently bloody. Of these, Punisher (2004) stands out as one of our favorites. The movie was a simple blood bath and tale of revenge that puts The Count of Monte Cristo to shame, and it’s enjoyable.

My next encounter with the Punisher came when my college roommate David started playing an Xbox game of the same name. In it, you kill hundreds, if not thousands, of gangsters with a variety of guns and other weapons. As Frank Castle, the player also gets the chance to brutally interrogate thugs — this almost always ends with them dying in horrible fashion. It’s a gross game, but it’s giddy in its over-the-top violence. You laugh if for no other reason than it makes you uncomfortable.

So that’s basically how I know the Punisher. An ultra-violent death-machine that takes no prisoners in his quest for vengeance. I’m totally okay with that. I don’t need the Punisher to have reasons for his actions, and frankly, it’s kind of interesting to think of him as being somehow mentally deranged. However, in my experiences the Punisher was only taken in in small doses. As a sustained character from issue to issue, I’m not sure how he’ll stand the test of time.

Issue 4 seems to be unworried by any of this potential baggage for the Frank Castle character. Indeed, it seems like for most of the issue writer Nathan Edmondson is just putting Frank through the ringer. When Castle makes his daring escape from the gym full of chemical weapons, the reader isn’t given privy to how exactly he escapes an explosion the size of a city block. 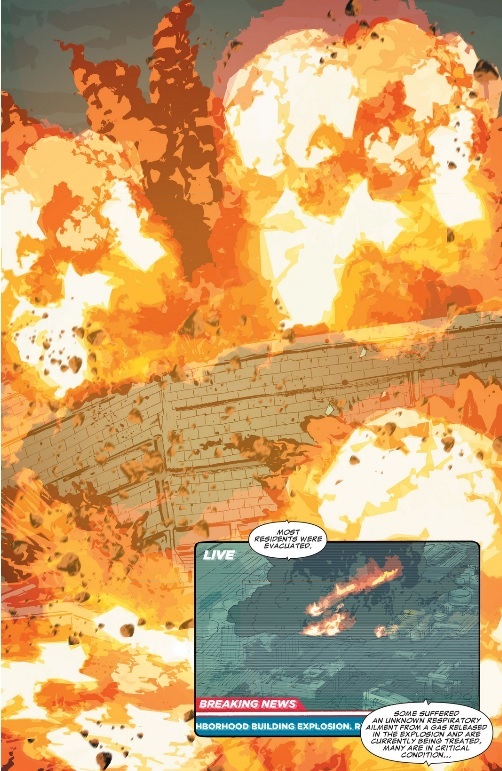 Next thing we see is Castle gearing up for round two and nursing his wounds. How exactly did he survive such a blast, without inhaling any deadly chemicals? We’ll never know and it seems Edmondson is saying it’s not important. While that might bother some, I really couldn’t care less how the Punisher survived. That’s not really why I read a Punisher comic. What I need is simply the Punisher kicking bad guy ass, and that’s what we get here.

So, finally getting directly to your question Patrick, I don’t think Frank’s one track mind makes him a weaker character. However, I’m not expecting much from him in the first place so any development we get along the way is simply extra credit. I will note, though, that a comic can’t be sustained on this one premise and emotionally empty character alone, and that’s where I think this series has some issues. Seriously, the only living thing I care about in this comic is Frank’s coyote. I was unphased seeing 15 thugs killed but I hated seeing that one dog tasered.

It could be  that my own character is deficient in some way and that’s the root of this feeling, but I don’t think that’s the case. While this is only the fourth issue of run, I think by now we should be making some emotional connections to somebody, but we’re not. If this series hopes to win me over, it needs some work in that area. While simplicity is nice in real life, I expect more complication, emotional and otherwise, in the lives of the heroes I read about.