Spencer: We all have that one friend whom we love dearly, but who’s clearly a huge jerk. What’s fascinating about having a friend like this is what happens when they fall in love and/or get married. It’s a strange thing to experience; there’s joy at seeing your friend happy, but there’s also a bizarre feeling of unease and dread. Can this last? Is it for the best? Should you warn their boyfriend/girlfriend about what they’re getting themselves into? (Pro-tip: Don’t do this). As sad as it is to say, there’s this odd feeling that maybe the whole thing is just a very bad idea. This is the situation Deadpool’s friends find themselves facing in Deadpool 27. Yes, Wade Wilson is getting married, and it’s exactly as strange as it sounds.

Guys, this issue is 86 pages (and $10!), so I’m not even going to attempt to recap the whole thing; instead, I’ll stick to Brian Posehn, Gerry Duggan, and Mike Hawthorne’s lead story. Meet Shiklah, Queen of the Underworld, former fiancée of Dracula himself, and Deadpool’s bride-to-be! Wade and Shiklah are madly in love, and despite Wade being, well…Wade, they seem like a perfect match. Deadpool’s friends respond to the news with a mix of bemusement and absolute horror — Adsit openly demeans Wade and the event at every opportunity — but despite everybody’s worst fears and the constant threat of U.L.T.I.M.A.T.U.M. agents showing up for revenge, the wedding goes off without a hitch, and everybody lives happily ever after…

Despite Wade’s cheerful demeanor and a heaping helping of jokes (this is easily the funniest issue of Deadpool in a long, long time), there’s still a sense of dread hanging over the proceedings. Many of Wade’s friends and colleagues are convinced that the wedding is a bad idea (with Wade’s track record, who can blame them?), plus both U.L.T.I.M.A.T.U.M. and vampires are out to kill Wade and Shiklah. In fact, early in the issue Posehn and Duggan tease us by appearing to kill Shiklah off, which is probably exactly what a good portion of readers were expecting to happen at one point or another in this issue.

Instead, though, the dread lifts. Posehn and Duggan have always been skilled at emphasizing the real human emotions that motivate Deadpool, but those emotions have most often consisted of pain and fear and anger. It’s a testament to their skills as writers that they managed to turn Wade and Shiklah’s relationship into something not only feasible, but amazingly romantic. 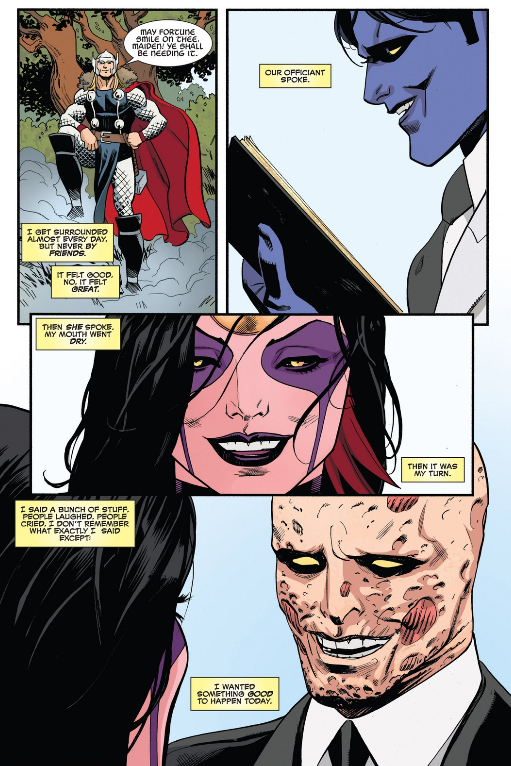 It’s hard to believe that those words are coming out of Wade’s mouth, and even harder to believe that they’re genuine, but Posehn and Duggan convince me of every word. Amazingly, they seem to convince the rest of the Marvel Universe as well: 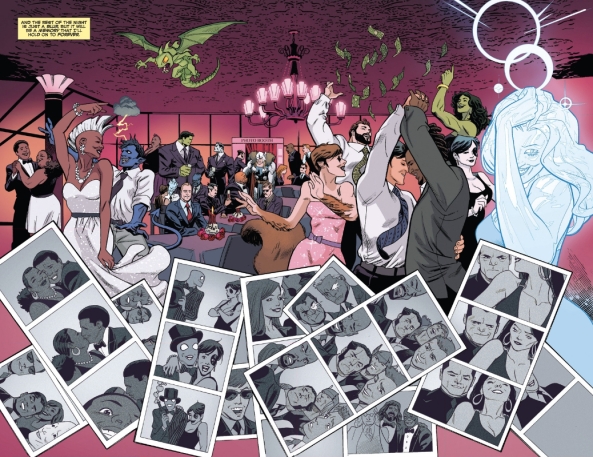 I could probably blow my entire word count just talking about this spread, but I particularly love the photos at the bottom. Preston and her family are sickeningly sweet and the grumpy Cables made me laugh out loud, but I was particularly disarmed by how genuinely affectionate Punisher and Elektra seem.

Wade’s wedding seems to have brought the best out not only in himself, but from everybody in attendance. Deadpool hasn’t always been a good person (or even a decent one), and he’s certainly been responsible for many repulsive acts, but after everything he’s been through lately, it’s hard not to get excited about his happy ending (not an euphemism). That’s why it hits me as strange that the issue immediately undermines that feeling of joy with its plethora of back-up stories.

Taken on their own, most of these stories are actually rather great. Duggan and Posehn start off strong with a disastrous bachelor party and another “inventory” story that’s just as exciting and fun as their previous efforts, and Joe Kelly’s “The Niagara Bride” is surprisingly poignant. Mark Waid has a lot of fun mocking and lampooning the idea of continuity, and just the title of Gail Simone’s first story is worth the price of admission alone (who else could have come up with “Eulogy for a Winkie”?). That said, I can’t make heads or tails of Christopher Priest’s bizarre “Fanged”, and Simone’s second story squanders much of the goodwill Deadpool built up during the wedding by having him attempt to marry his buxom, unconscious partner in a scene that veers awfully close to rape.

Plus, there’s a racist witch doctor in this one that made me feel really uncomfortable. I’m having a hard time believing Simone wrote this; are we sure the credits didn’t get screwed up somewhere? [EDITOR’S NOTE: Simone has confirmed on her Twitter that there was an error, and she did not write this story.]

It’s reading all these stories in a row, though, that starts to undermine the happy ending of the wedding. Wade and Shiklah’s relationship felt unique before I saw Wade get married ten more times, but knowing Wade’s been in all these prior relationships starts to make Shiklah feel less special. Many of those marriages were shams, but both the sham marriages and the legit ones all went kaput, and it sets an unfortunate precedent of “disposable women” that makes Shiklah’s prospects look all the more dire.

That’s perhaps what’s most worrisome to me. I know that change is an illusion in comics, and that even if it lasts a decade, Wade’s marriage won’t be permanent. Obviously I know that, but I didn’t need to be reminded of it after such a joyous wedding celebration. I was ready to bask in the afterglow, not see U.L.T.I.M.A.T.U.M. and ten failed marriages and Taskmaster’s warnings guarantee that things won’t end well.

As a hilarious celebration of everything that makes Deadpool special this issue works like gangbusters, but when you dig deeper it seems to be sending mixed signals about whether or not Wade can have any sort of lasting relationship — or whether he even deserves one, for that matter. Patrick, is the message here any clearer to you? Is there a message at all? Am I just being too sensitive? I do always cry at weddings, after all…

Patrick: You’re not being too sensitive at all — in fact, I think you’re being as sensitive as the creative team intends you to be. It’s a weird set of stories that are just as tonally contradictory as you’re saying, but I think that’s the point. Remember back to our first write-up of Deadpool — we were heaping praise on the crackerjack humor and insane plotting, but some commentors bemoaned the lack of depth. What Mike and Drew saw as strengths unique to the character, fans more familiar with his catalog saw as digression. It kicked off a big debate about what makes Deadpool Deadpool, and by extension, what defines any single comic book character. It’s an impossible thing to justify — or at least a largely inconsistent one — because definition implies a single authority on the subject. Heads up guys, there is no single authority on Deadpool: lots of people have founds different kinds of success with him throughout the years. That’s what we’re seeing in the forms of these back-ups, half a dozen conflicting voices all singing their own verse.

I think the reason I’m so happy with the overall package of Deadpool 27 is that the lead story finds a very simple rationale for why this relationship is different from Wade’s previous marriages. Deadpool and Shiklah are like Gomez and Morticia, and their joy comes from a place that feels very, very Addams Family-esque. Just as Deadpool has developed into a character that has a childlike joy for horrible things, this couple acknowledges the “reality” of their collided worlds and embraces every bizarre turn joyfully. Yes, there’s a lot of murder in this issue — especially for a wedding issue — and, yes, Wade and Shiklah’s enthusiasm for killing their would-be attackers is almost maniacal, but this is the world they live in and the path that they’re forging together in this world is one that’s peaceful and meaningful (by their shared, fucked-up standards). Posehn and Duggan know that they’re letting the issue get a little sweet as Wade and his groomsmen, and then they draw attention to the fact that, even on this, the day of my Deadpool’s wedding, he’s already killed some terrorists.

That’s what’s so beautiful about their relationship. Deadpool and Shiklah are accepting what is and making the best of it. And they’re happy! My goodness, I’m so glad that the wedding itself goes off without a hitch. The page Spencer posted of it does a remarkable job of telling us what happened at the ceremony without making us actually witness it. Deadpool’s narration allows us to remove ourselves from the exact moment and instead rest in the general feeling of this union. Any conflict in the series or in the lives of its characters melts away and we get to just bask in the essential nature of these characters. It’s like the end of the Parks and Recreation episode “Fancy Party,” which depicts the surprise wedding of Andy and April — a wedding that Leslie sees as her duty to stop (y’know, young, dumb kids, etc.). When the ceremony starts, she backs off and sees how happy everyone is. As the audience we’re treated to that same happiness, free from plot, free from complication. It’s one of my favorite moments on one of my favorite shows*, and this issue had me feeling a lot of the same ways.

Feelings and grand statements about who a character is/was/can be/should be aside, it’s also pretty funny issue. There’s just about every kind of joke in these 86 pages, from the pointless visual references (why an Abbey Road joke?) to some smash-cut character humor.

Oh, and let’s not forget the plethora of dick-spider jokes in the Scott Koblish illustrated back-up. Look, I don’t often have occasion to even write the word “dick-spider,” let alone chuckle about it for 4 minutes straight.

*Watching over that clip again, I have a few observations. A) Colton Dunn’s reading of “That one is dead, we know that” is fucking hilarious. b) April, Come She Will is an amazing song. C) Andy refers to himself as “the luckiest man in the Galaxy” — I wonder if that’s what set the wheels in motion to cast Pratt as Starlord…