Shelby:  I’m pretty bad at talking about my feelings. I’ve gotten better, because I have realized the value in just stating how I feel or what I want plainly, but I still sometimes have a hard time with it. Talking to dreamy men is still my biggest challenge; there’s just something about the simple phrase, “You are cute and cool, want to grab a drink?” that causes my brain to just completely melt down. I recognize it’s pretty silly, but am at the same time powerless to stop it. Maybe it’s an extreme fear of rejection? Or maybe I’m worried I’ll end up in a awkward situation like Clark and Diana, who have an unspoken, “I love you, too” hanging between them (not to mention nuclear fallout).

When last we left our super couple, they were not looking so good. They survived being at the heart of a nuclear explosion, but Clark is little more than an emaciated skeleton, and the cloud cover is too thick for him to get the sun he needs. Diana finds a spaceship in the rubble (Zod and Faora’s, maybe?) and shoots a hole in the clouds for just a tiny peak of sun to get through. This summons ghosts, who shoot Diana, lose their guns, and are as confused by the whole situation as I am.

Between the two of them, Clark and Diana manage to get to Hessia’s; Diana stays there for healing while Clark heads back to the Fortress for his own little tanning booth session. When the two finally get back together, they go on a real date to Diana’s favorite club in London. They celebrate the fact that the world is calm enough for the moment that they can take that kind of time together, not knowing a government sub has dug up Doomsday and now he’s on the prowl.

So, that “I love you” is still hanging out there, huh? Charles Soule taps into the adorably awkward in all of us by having Clark and Diana not address the issue. There’s a few internal dialogue boxes on the first page that address that they’re both thinking about each other and those three little words, but that’s it. I’m actually glad they don’t explicitly talk about it; it makes the whole situation seem more real. If a couple regular people were in that situation, that is exactly how it would go down for them as well; both wanting to bring it up, but afraid it will make things too weird, so no one says anything about it. It’s cute and relateable, which is exactly what this super-powered relationship needs. They’ve proven they are better as a team than apart and that they’re relationship is only serving to strengthen them when it comes to fighting the baddies, which they’re going to need now that the Biggest Bad is on his way to the surface.

Despite their relationship progressing and the reemergence of Doomsday, I cannot get into this title. I love Soule and I love Wonder Woman, but here the characters seem so flat. While I admire the way Soule is tying this book to Clark and Diana’s own solo titles, I think that might be my problem with it. Having to work with the restriction of their existing story lines means these characters don’t read quite like they do in their own books, nor do they read quite like Soule versions of the characters. Or maybe these two are just too similar of characters for me to feel invested in their relationship at all. This book isn’t especially bad, I just find it kind of boring.

The art doesn’t do much to liven things up for me, either. Pencils are credited to Paulo Siqueira, Eddy Barrows, and Barry Kitson. I don’t know how that’s split up, so I’m just going to credit all three for each page unless someone out there knows better. Team Art can have a real cinematic eye for scenes; there’s a panel of a ray of sunshine hitting Clark’s emaciated hand, and then a few panels later it’s the exact same scene, but his fingers have curled a little bit. It’s subtle and concise, perfectly telling the story with zero dialogue. Unfortunately, much like the big boss fight last issue Team Art sometimes sacrifices clarity for flashy layouts to the detriment of the book. There’s a spread where Doomsday first emerges from the ocean floor and kills a great white shark. Should be thrill-a-minute, but I have a hard time determining what exactly is happening. 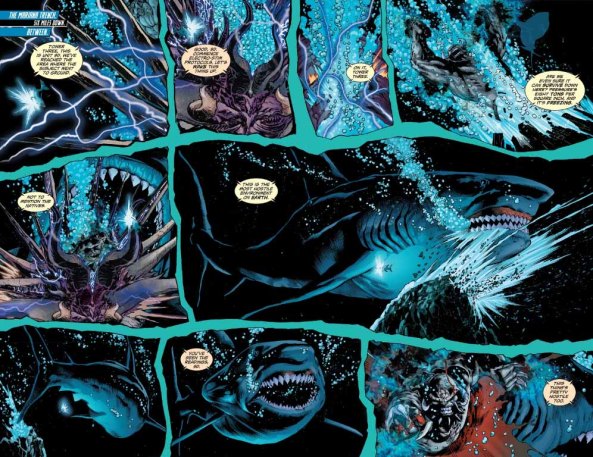 I’ve read this issue a couple times, now, and studied this spread pretty intently, and I only just figured out now that the IMPOSSIBLY large shark actually ate Doomsday, who then proceeded to punch (or something) his way out of the shark’s gut. I know Drew likes to talk about how the gutter between panels is where the reader’s imagination takes over, but I feel like I’m just not getting enough information in each panel for my imagination to take me across the gutter to the next. Between the somewhat cluttered art and my own indifference toward Clark and Diana’s relationship (which is kind of supposed to be the point, here), my eyes tend to glaze over when I read this title. Help me out here, Drew; what is it about Superman/Wonder Woman that I’m missing?

Drew: Well, to paraphrase another awkward moment in the life of many relationships, it’s not you. Indeed, I think much of the issue is unclear. Heck, the opening stream of consciousness from Clark and Diana totally fell flat to me because of Clark’s first two (totally unpunctuated) voiceover boxes.

“You” switches from Clark to Diana between those two lines, and while there’s a Joycean cleverness to it that demonstrates their closeness by making Clark’s sense of self flow into his sense of Diana, it’s needlessly confusing. Pronouns are only useful when it’s clear who they’re referring to, and it’s not until the end of that second line that it’s clear that “you” has changed. That level of confusion is a feat for a scene that features only two characters, but hinges on the fact that Clark is referring to everyone (including himself) in the second person for some reason. Clark almost repeats himself a couple lines later, but shifts into first person — “Told her I love her” — making the opening lines seem needlessly clunky.

I was similarly confused by all of the “Now,” “Then,” and “In Between” nonsense that is supposed to give us context for when any of this is happening. I was under the impression that the last issue was all told in the present tense, so when this issue suggests that that was actually “Then,” and that “Now” has skipped some undisclosed amount of time into the future, I can’t help but wonder why. This could all happen “Now,” with the London scenes simply happening “X Days Later,” which would be just as clunky, but would at least avoid suddenly putting the resolution to the current arc in the past.

It might also give us some specificity as to how much time has passed between the “Then” and “Now” scenes. Is it a few days or a few months? Diana calls it “too long.” That time seems placed in there to catch us up on the events of each character’s solo titles (so Diana is now the god of war, and Clark has since faced down a few more of those ghost soldiers), so I can understand being coy with it, but knowing exactly how long that “I love you” has been hanging there is kind of essential to our reading of the scene.

Oh, hey, speaking of those ghost soldiers, I understand who they are — and even why they might show up right after the nuclear blast — but that scene is still incredibly confusing. These soldiers are apparently here to neutralize the threat that is Superman (a thread that has been going since the start of Greg Pak’s run on Action Comics), but the staging of that scene makes very little sense to me. I’m still not sure if the KRZZAAAKKK is caused by Clark’s heat vision or by that same laser on whatever it was that allowed Diana to part the clouds. We see the effect, but we never see the cause, making that sequence boil down to “guys show up, thing happens, guys leave.” Thrilling stuff!

Still, I enjoyed the closing scene with Clark and Diana, largely because it ignores the scope of the rest of the issue and just focuses on their date to Diana’s favorite rock club. There isn’t a ton of character insight, but it does remind us that these characters are both still in their early 20s, where hittin’ da club might even be remotely appealing. That’s a modest accomplishment — and maybe only feels like an accomplishment in light of how muddled the rest of the issue is — but it’s a much-needed reminder that Soule can handle these characters well when he doesn’t need to stretch them from point A to B to accommodate an impending crossover event. Here’s hoping Superman: Doomed is at least gentle on this series.