Patrick: I love Batman, but I’ve been exposed to so many books and games and movies and TV shows (plus one Stunt Show Spectacular at Six Flags), that very little in a Batman story can genuinely surprise me. The writing team on Batman Eternal acknowledges this familiarity, simultaneously leveraging those emotional beats for everything they’re worth, and suggesting that there are still some surprises out there.

Let’s take the explosive first page of this issue as an example — it’s a flash forward to “The End.” Whether that’s the end of Batman’s life or the end of Gotham or merely the end of this story goes unstated. The image is simple, but effective: a defeated Bruce lashed to a ruined Batsignal, the Batman logo carved into his bare chest and Gotham burning behind him. 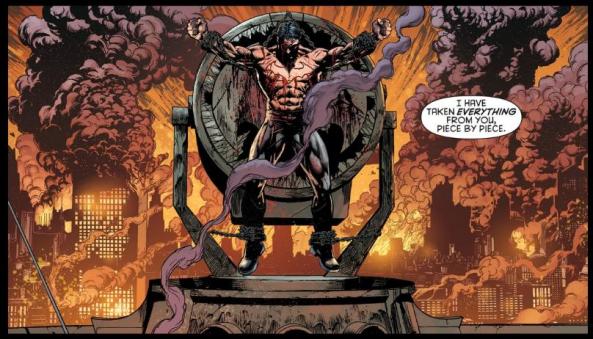 This is objectively shocking: a complete subversion of what we expect to read at the beginning of our Batman stories. Or is it? Seeing Gotham in the throes of its own destruction should be devastating, but we’ve already seen it happen three times in the New 52 alone. This isn’t a bold, exciting new tale, it’s something that we’ve seen before. In the next scene, which is markedly less sensational, a principled out-of-town cop takes a train into Gotham, ready to fight for the soul of the city. This too is something we’ve seen before, and just in case we aren’t able to make the connection between Officer Jason Bard and Jim Gordon, every other cop he runs into makes the comparison for you.

Seeing these familiar tropes has an effect on the reader. I know I see Gotham in ruins and already my brain is plotting a million different possible scenarios that get us to that point. Batman loses control of the city — fine, I’ve seen it before and I’ll see it again. Let me guess, his allies are able to rally together in the end to save the day? Oh, and Jason Bard will be among those allies. This is the shitty attitude that pops up inadvertently in my head. Honestly, I can’t help it, I saw the stimulus and out comes that practiced response, appropriate or not. This is exactly what Jim Gordon experiences chasing a perp through the subway: he sees a gun, and takes the shot to disarm him. Familiar stimulus, practiced response. Only, the gun’s not there and the result of Gordon’s assumption is that trains collide and hundreds (possibly thousands) of people are killed. I don’t think the price for my assumptions will be quite so steep, but I am thinking twice about trusting my eyes.

Which is a shame, because my eyes are getting something of an urban catastro-feast in this issue. Jason Fabok gleefully renders kinetic destruction on a grand scale. I’ll admit to a little private fist pumping when Batman intercepts Professor Pyg in the the Batmech suit. That aforementioned train collision is also horrifying. Fabok nails the sense of space in a subway station, using long, narrow panels to indicate just how little room there is to maneuver in those tunnels. When the trains actually crash, I found myself holding my breath.

I don’t care how many Batmans you got down there: that’s bad news.

Speaking of Batmans, it’s a little surprising not to see any of Bruce’s costumed allies in this issue, right? I mean, there’s like a dozen of them on the cover, but none on the pages themselves. The ranks of the cops are filling out nicely — Bullock, Bard, Gordon, Forbes, and Sawyer — but we might have to wait a little to get more capes and cowls in the fray. Not that it matters that much, I’m digging Bard’s idealism and I’m always always always happy to see Maggie Sawyer.

It’s an explosive first issue, and I can’t wait to see how wrong I am in all my assumptions.

Drew: It’s interesting: that heady mix of old and new, familiar and strange, expected and surprising seems to be at the philosophical core of the New 52, and I think this issue illustrates that idea better than any I’ve other seen. You’re right to cite the similarities between Bard’s introduction and Gordon’s from Year One, but just what are we to make of those parallels? They immediately endear Bard to us by making us think of Gordon, with the obvious wrinkle that Gordon is also still around. Are those parallels to Gordon a shortcut to showing us that Bard is a good guy, or a feint to willingly mislead us? It’s obviously WAY too early to make any kind of educated guess, but I think it speaks to the power of the New 52 that anything is possible.

Of course, embracing the familiar for the sake of comfort isn’t bad, either. I’d argue that Pyg’s plan is meant as a kind of hyper-Batman scenario. It’s introduced in medias res, confirming that we already know how we got to this point, and features a panoply of classic joker-isms — gimmick-specific toxin, children in danger, Batman death-trap, heck, even the image of him flying a biplane. It’s pure nerd comfort food. I have my philosophical discomforts with that kind of safety, but they work for me here because these give context for the other tropes this issue does subvert. Normal needs to feel normal for different to be exciting, and that action scene establishes a familiar Batman status quo in a nutshell.

I’d LOVE to take up a discussion on the merits of the familiar in contrasting the unfamiliar (or just the value of our comfort in general), but I’ll save that for the comments. Instead, I’ll gush a little bit about another well-worn path I’d actually love to see this series explore: the Gotham City Police Department’s Major Case Unit. I am a HUGE fan of Gotham Central, and this issue’s emphasis on Gotham cops (including Maggie Sawyer and a new MCU shift lieutenant) had me smiling ear to ear. I’m with you on expecting more of Batman’s costumed allies from this series, but with most of those characters in their own solo titles, I’m more than happy to share this space with the GCPD.

Oh, but there are so many fun things to talk about — the return of that Bat Mecha Suit, this creative team’s take on Pyg, or what exactly is going on with that guy Gordon was pursuing. I’ll leave those for someone else to address (or I’ll bring them up again in the comments), but in the meantime, does anybody know of any legal precedent for such massive manslaughter charges — especially for what was obviously an accident? And wouldn’t Gordon be protected from immediate charges pending an actual investigation? I feel like the FOP would be particularly strong in Gotham, and would definitely defend a cop who fired their sidearm in the line of duty. I could see Gordon being benched right away, but Mirandized and arrested seems like a stretch.

Spencer: Drew, I’m glad you brought up how extreme the immediate arrest of Gordon was. My friend Dave and I spend a lot of time talking about Batman, and his biggest complaint about the franchise has always been how quick the GCPD are to turn on Batman. 95% of the time they’re practically useless when actual criminals are out slaughtering people, but the second even the slightest rumor about Batman maybe possibly killing someone crosses their desk, they’ve mobilized every SWAT team in the country and have Batman cornered — see: Batman: Year One, Batman: Mask of the Phantasm, the Batman: The Animated Series episode “On Leather Wings”, The Dark Knight, and many, many more. I get the same feeling from the Gordon scene — it’s an overblown response meant to put the hero in immediate, undeserving danger, and it’s very, very frustrating to watch.

Of course, there’s obviously more going on here than meets the eye. First of all, Major Forbes doesn’t even attempt to hide his contempt for Gordon nor the fact that he’s apparently a crooked cop.

Notice that Forbes is also the major instigator behind Gordon’s arrest, the one who makes a fuss, demands that Gordon be arrested, and makes sure to leave no opportunity for anybody to talk back to him. Whatever’s going on here, chances are he’s involved in it.

Whether he is or not, though, Forbes can’t be working alone. Gordon seems to have hallucinated the gun that his victim was holding, which would mean that some sort of hologram projection or mind-control is involved, both of which are likely beyond Forbes’ means. What I find most interesting about this development is that we, the audience, also see the victim’s gun. Gordon’s bullet goes through the gun, meaning it’s not real, but nobody else sees it, not Batman, not the victim himself, just Gordon and us. Are we viewing events from Gordon’s perspective? What else might we be seeing that nobody else is? Can we trust anything we’ve seen in this series? The issue ends by returning to the flashforward that opened the issue, where Bruce’s captor has his own musings about sight.

If it takes Batman, master detective, until “the end” to see what’s going on, to see how the threads that likely started with Gordon’s arrest have all led up to the destruction of his city, than I can’t imagine we’re going to be able to parse our way through the clues to see what’s real or not any time soon. I think I’m going to have a lot of fun trying, though.