Suzanne: By her own admission, Elektra has a bad habit of identifying herself through relationships to the men in her life. Her father, Matt Murdock, Kingpin, Bullseye…they all contribute to Elektra’s history in powerful ways. My first exposure to the character was Jennifer Garner’s appearance in Daredevil. Despite having a powerful skill set as an assassin, I didn’t leave the cinema wanting to kick butt like Elektra. Maybe this is a bit unfair, but my overall impression was that things happened to her and that element of passivity was unattractive.

Elektra falls easily into the category of Women in Refrigerators with her tragic death at the hands of Bullseye. So how does a writer handle an ongoing solo series for a character with moments of limited agency? W. Haden Blackman clears the air by acknowledging this aspect of her past in a thoughtful exposition. She looks at herself in the mirror and reflects on her history with, “Instead, I see only reflections that belong to someone else.”

Elektra sorts through her past relationships and careers as both a villain and hero to return to her role as an assassin. She meets up with the Matchmaker (how great is that name?) who sets her up with a job outside of New York. Her new target is Cape Crow, an urban legend of the assassin world who recently resurfaced. The only caveat is that she has to bring him in alive. Then the narrative switches abruptly to the perspective of assassin Bloody Lips, who looks super creepy thanks to the gorgeously rendered pencils of Mike Del Mundo. He quickly dispatches some S.H.I.E.L.D. agents to open the vault holding Bullseye for what looks like a dark ritual. At the same time, Elektra stakes out Cape Crow at one of his old safe houses. 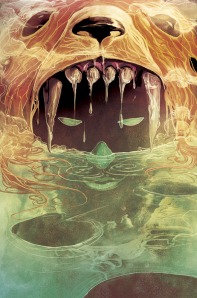 From her first conversation with Matchmaker, it’s clear that Elektra is kicking ass and taking names in this series. She is covered in blood from dead assassins of The Hand that she just killed and doesn’t particularly seem to care. Elektra reminds me of a seasoned warrior coming off the battlefield. Her cold, calculating demeanor highlights her single-minded approach to her identity as an assassin. Speaking of blood, the cover of this issue is a portrait of Elektra composed of DEAD NINJAS AND BLOOD. Let me repeat: DEAD NINJAS AND BLOOD. Could there be better marketing for a book about an assassin returning to her craft?

Going back to their conversation, Mike Del Mundo gets all the details right with The Matchmaker. She’s equal parts lady and information broker for assassins. The Matchmaker looks like a 1920s flapper with bobbed hair and gloves as she gracefully sips on her tea. Her good breeding contrasts perfectly with Elektra’s almost savage demeanor when she drips blood on the carpet. I look forward to seeing how they continue to interact in future issues and how their priorities might conflict.

Overall, the tone of this book is graphic and brutal. The body count for the first issue alone is in the twenties. Bloody Lips holds up the bloody heart of a woman he’s killed. Cape Crow kills off a few assassins on the beach and then lights them on fire. It speaks to the talent on the book that I can overlook this level of violence and get wrapped into Elektra’s dark world. My only concern is how Elektra’s role as an anti-hero translates to a monthly series. It’s hard to support a character that’s constantly killing people off without a moral code like Black Widow has. Patrick, I feel like I barely scratched the surface with this issue and Blackman’s layered exposition. What were your thoughts on Bloody Lips and his narrative? Did you find Elektra’s reflections as insightful as I did?

Patrick: Those first 5 pages are absolutely jaw-dropping. I don’t think I’ve ever seen anyone so gracefully elucidate what’s wrong with the character of Elektra and combined those insights with suggestions on how to right that ship. It’s poetry – immediately personal and touching on a universal truth about all of us as we come into our own. Del Mundo appears to have taken his cues directly from Blackman and he allows those opening pages to have just as much visual poetry to them. I’m totally floored by the images that simultaneously reinforce the themes of the narration and defy them. 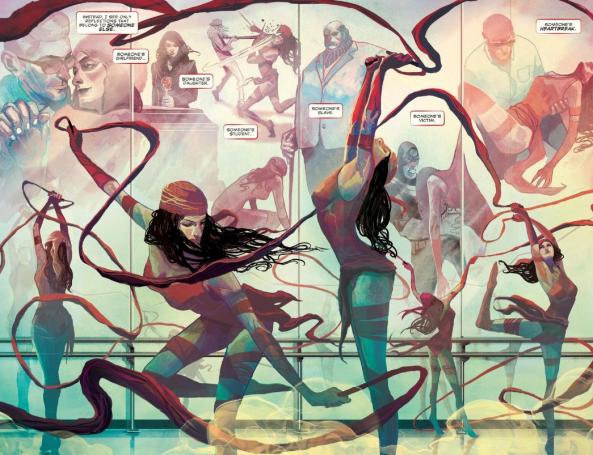 As the narration continues on next page, Elektra mentions how she always wanted to be a ballerina but lacked “the form of balance” necessary to be a dancer, but Del Mundo’s double-double-splash pages gleefully contradict that. The reflections are more honest (theme!), but I love this narrative distance between what’s written and what’s shown.

This effect is even bigger during Elektra’s conversation with the Match Maker. She affects this very old timey way of talking, perfectly suited for the flapper-y design that Del Mundo gives her. However, she’s talking about some dark, disturbing shit, all masked in some delightfully anachronistic prohibition-era language. Black’s having a field day, wielding colorfully dated prose like a pro. Then, possibly because modern readers have never heard the phrase “on the trolley” outside of that one episode of the Simpsons, Del Mundo’s drawings tell the simple honest truth of situation. Don’t quite know what she means when she says “threw him a retirement party”? Del Mundo’s got your back.

That’s all training wheels, the really dense writing enters with Bloody Lips. I’m still not totally clear on what’s happening with that character, other than there appear to be multiple voices inside his head, and he gains the knowledge and abilities of his enemies by eating them (which could well be contributing to the variety of perspectives that stream out of his voiceover). While Blackman achieves some more great moments of poetry, that text does not tell a particularly clear story. Instead, it’s atmospheric writing, and Del Mundo is promoted to main stage storyteller. Especially during this sequence, Del Mundo’s art is free and flowing, with inserts that tell a very specific, moody tale about losing one’s identity. It’s a neat little mirror of Elektra’s opening: where she is rejecting the labels forced onto her by the men in her life, Bloody Lips is embracing the identities of the animals he encounters in their death. How fucking efficient are those metaphors?

I don’t want to speak too soon — first issues don’t always indicate what we can expect from a whole series — but between Blackman’s pen and Del Mundo’s brushes, this almost feels like the second coming of Batwoman. It’s for that reason alone that I’m not all that concerned about the limited shelf-life of the anti-hero story. Elektra has a loose moral code, but Blackman and Del Mundo have a tight artistic code. As long as the execution stays this high, I could easily read arc after arc of Elektra getting tough jobs from the Match Maker.