Drew: The above quote isn’t about Robert Venditti and Van Jensen’s new run on The Flash — Manapul was actually speaking about the start of his own run back when I interviewed him in 2012 — but it might as well be. That a statement can be used to describe a new take on the character as well as the newer take that succeeds is is a universal truism in comics, but it also speaks to an innate truth about the Flash: he needs to move forward. Of course, Jensen and Venditti aren’t privy to the clean break that started Manapul’s run, and have thus needed to address Barry’s past as much as his future. Fortunately, they are also paying attention to this series’ history of meta-commentary, addressing their own creative baggage right on the page. Of all the things they could have ported from the previous run, this is my absolute favorite, injecting The Flash Annual 3 with a sense of rebellion.

The issue opens with a nod to this series’ growing pains, as Barry remarks on Central City’s quick recovery. Barry is referring to Forever Evil, and while that may be what Jensen and Venditti are getting at, I think the nod to rebuilding is a bit more personal. That’s largely due to Barry’s accosting of a young vandal, who just finished his anti-Flash masterpiece.

Barry’s lines are so direct, he might as well have said them directly to critics of this series. Venditti and Jensen seem to be imploring us all to give this series a little time to reestablish itself before dismissing it out of hand. It’s a clever idea that just escapes being too on-the-nose thanks to the reveal of the vandal’s identity: one Wallace R. West.

We saw last week that Wally will die five years from now, and that 20 years from now, Barry will resolve to do something about it. That plays out here as the Barry of the future sets his time-traveling plan in motion, first checking in with Iris for a reminder that Daniel West just tried this same thing only a few months ago, and then with Grodd to harvest his speed force powers (including the time-traveling powers Grodd similarly harvested from Daniel). It’s several shades darker than we’ve ever seen Barry in this series, but none of it is quite as shocking as his ultimate goal: to kill himself in the past.

That seems like the very definition of a time paradox — and also more than a little unlikely — but it’s certainly a thrilling premise. Why does Barry need to die? His turmoil in the future seems to stem from the car accident that killed Wally, but no explanation is yet given for why he can’t just go back and stop that accident. In any event, Barry’s time traveling certainly reveals his desperation — he explicitly mentions how Daniel’s time-travel broke the speed force, but plans to do it himself. Of course, if Barry is able to execute his plan, he will never be alive to break the speed force, but again: time paradox.

Then again, this may all simply be more meta-commentary. I suspect the lesson at the end of the day here is not to tamper with Barry’s history. Venditti and Jensen may have cannibalized the tone of the previous run, but seem to be asserting it as off-limits, narratively. That’s always a strong choice for a series that involves time travel (it would be all too easy for this run to become Back to the Future part II), and reasserts the importance of Forward motion in Barry’s story.

Of course, Barry’s forward motion seems to be in jeopardy here. Last issue implied some kind of relativistic effects were happening when Barry ran, and this issue finds him again experiencing time slower than everyone else — he meant to dash away for a second, but ended up being gone for several minutes. Could it be that the faster Barry runs, the slower time seems to pass for him? I’m not sure I understand general relativity well enough to say for sure, but I certainly understand narratives enough to get how clever it is that Jensen and Venditti made their first major development on this series Barry’s inability to move forward.

Of course, this may not qualify as the first development — while they’re certainly laying the groundwork for something with all of the weird time wankery, they seem more focused on all of these supervillain weapons that seem to be running around. Barry is following up on a case involving a snow gun, and is nearly defeated by some art thieves wielding an array of anty-Flash weapons. Who is pulling the strings behind these crimes remains to be seen, but I’m tantalized by the thought that it might be future Barry, already acting in the present of the story.

Scott, it feels like we were just having this conversation last week (could we be experiencing some time wankery of our own?), but I’m curious to hear how you’re adjusting to this new creative team. Last week had us both reasonably optimistic, but this issue may have cemented them in my mind as rightful heirs to this series. It’s certainly a reinvention, but they seem to have many of the parts that made me so excited about this series in the first place. Has your opinion moved one way or the other since last week?

Scott: This issue quelled most of the fears I had about the transition to this new team. Last week I was worried that Venditti and Jensen were ignoring the recent “Reverse Flash” arc, but that is clearly not the case. I’m glad Barry and Iris acknowledged Daniel West’s time traveling foolishness and I’m intrigued by the fact that it doesn’t diminish Barry’s resolve. I can’t wait to find out what exactly happens over the next 20 years to take Barry from this: 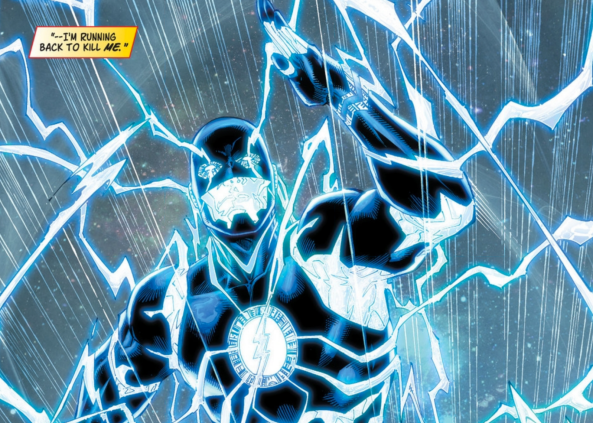 This comes a moment after Barry literally blows Grodd’s head off (Drew, I’m interested in your meta-commentary read on that.) It’s safe to say Venditti and Jensen are shaking things up. The simultaneous introduction/killing off of Wally West last issue was a bold move, and I like the way they are continuing to tease more details without giving too much away about the future, like the fact that Barry and Iris spent years together and he’s only just revealed his identity to her. 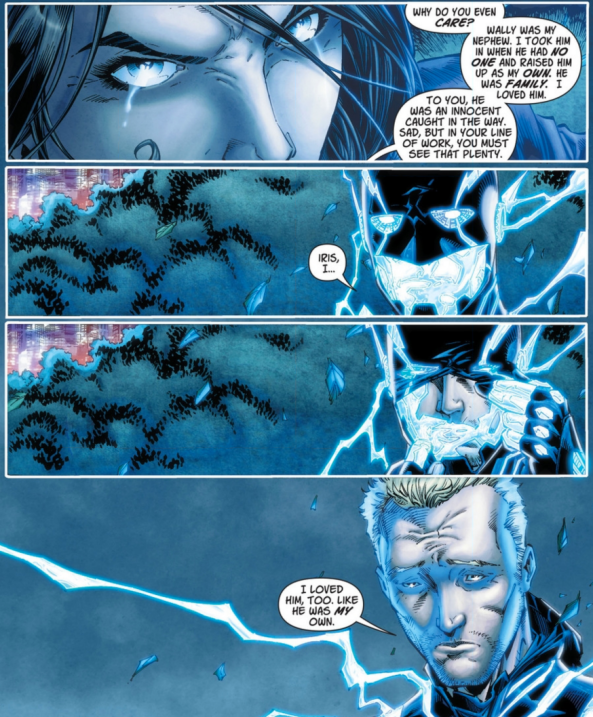 The exact nature of Barry and Iris’ relationship at this point, and at the time of the accident, is unclear, but in any case this seems like a highly emotionally charged reveal. Iris doesn’t blame Flash, the superhero, for not being there to protect Wally, but learning that he is also the man Wally looked to as a father-figure would likely change everything for her. To place this scene here, before we know any of the specifics about what happened between Barry, Iris and Wally, seems rather strange. This all happens in a timeline that will be erased if Barry has his way, so I won’t get too worked up about it, but I want to revisit this scene once the story is complete to get its full impact.

Drew, I love the idea that future Barry might be the one behind the attempt at present Barry’s life. Watching older Barry try to outsmart his present-day counterpart has the makings of a classic game of cat and mouse. Somehow, though, this doesn’t seem like the way Barry would go about killing his younger self. I can’t see why he would sanction an art heist just to lure young Barry out as the Flash. Wouldn’t it be easier to go after Barry when he’s not already on guard as the Flash, like by poisoning his morning coffee or something?