Spencer:  On the surface, the Great Society and the Illuminati — the two teams at the center of Jonathan Hickman and Rags Morales’ New Avengers 17 — seem to be as different as day and night, but the more we dig into these groups, the more similarities emerge. They may handle the Incursions differently, but deep down, both teams seem to know that they’re only delaying the inevitable: it’s the way they face the end of the world that truly defines these heroes.

The Great Society manages to fend off the last few agents of the Mapmakers, but utterly exhaust themselves in the process. Still, things are looking up, at least until the Norn senses another Incursion beginning. The Rider seems ready to give up — they have nothing left to give, he argues — but Sun God does what he does best and rallies his troops. Back on our Earth, Black Panther and Namor watch these events and debate whether the Incursions can be stopped, whether there’s any point in having hope at all, and the two bitter rivals actually manage to reach a moment of pure emotional honesty. That moment is short-lived, though; they realize that the events they’ve been watching take place in the future, and that the Illuminati will soon have to fight the Great Society!

Perhaps my favorite moment in this entire issue is the reveal of how the Norn destroyed the Mapmaker’s Earth — and what it means for his future:

The Norn is literally sacrificing some of his free will, some of his possible choices in the future, to help stave off the Incursions, and it’s a remarkably astute metaphor for the situation the Illuminati have found themselves in since the Incursions began. Every measure they take to keep their universe alive requires a sacrifice, and it most often comes at the expense of the Illuminati’s personal lives: Namor and T’Challa have both lost their kingdoms, Dr. Strange may have sold his soul, and now Bruce Banner has sacrificed his personal life entirely to join the team. In contrast, the Norn’s sacrifice is much grander, much more elaborate, but ultimately, these situations are all the same: the Incursions are robbing these heroes of their futures.

It does feel like a rather hopeless situation, and I think it’s significant that the Rider is allowed to show doubt, to have his convictions waver. The Great Society isn’t blindly, naively optimistic, but instead they have to fight for their hope, and Sun God is their greatest inspiration in that respect. I suppose it’s no surprise, then, that the Illuminati are a more pessimistic group; their “Sun God”, Captain America, had his memory erased and got kicked off the team.

In that sense, Namor seems like Sun God’s dark mirror. Sun God knows they may never stop the Incursions, but he hasn’t lost hope, and he’s willing to fight until he dies; Namor, in comparison, barely seems willing to fight at all. His losses and regrets have wiped out whatever nobility he may have had, leaving him a cynical, sarcastic day-drinker just going through the motions.

T’Challa, meanwhile, aspires to the same nobility as the Great Society, but for all his talk of hope, he seems far more sober about their chances of successfully combating the Incursions. It’s his ability to be honest about this fact, though — to joke about it, even — that leads to a moment of catharsis between T’Challa and Namor. 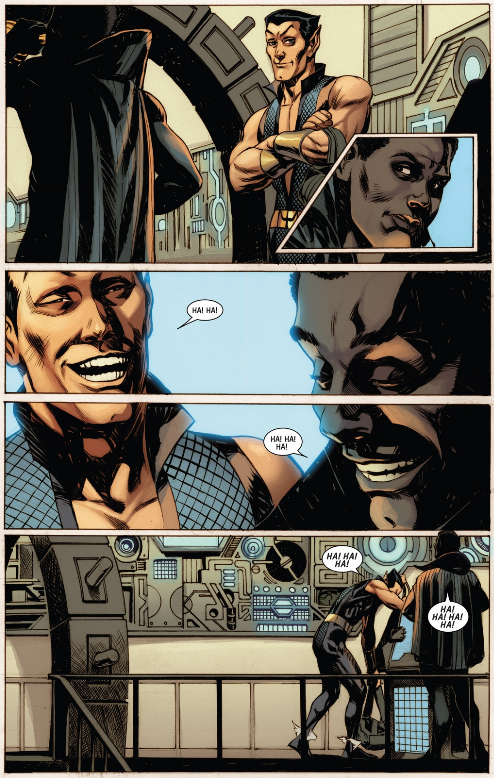 The lack of communication, respect, and teamwork between the Illuminati — and especially the bitter feud between these two — has long been one of the biggest issues facing this team and their chances of saving the Earth. Considering that, I find it amazing that it isn’t a big superheroic moment from Sun God or Cap that unites these two, but simply a moment of bleak truth. Maybe the Great Society isn’t inherently better than the Illuminati — maybe they’re just different.

The Great Society certainly seems more heroic in the traditional comic book vein, but this also seems to be a tiny bit of a hindrance. They may have a ton of fancy ways to end Incursions that the Illuminati has never even dreamed of, but they also seem to be exclusively reactionary, even literally dashing from Incursion to Incursion in this issue with little time to plan. The Illuminati, in contrast, have been trying their hardest to find a way to stop the Incursions for good; so far they’ve had little success, but at least they’re trying.

Still, Hickman doesn’t seem to necessarily be siding with either team. I think the Illuminati may indeed learn a little something from the Great Society, but that isn’t what this issue is about; it’s about how these two teams handle the end of the world, and how that reveals who these characters really are. The Mirror may never help the Illuminati find a way to end the Incursions, but in its reflection they’ve found a way to be honest, to connect with their teammates, and that may be the most vital information of all — assuming they survive their encounter with the Great Society, of course.

As always, New Avengers is a deep read, challenging yet rewarding, and I feel like I’m barely scratching the surface of what’s going on in this book; I didn’t even get a chance to praise Rags Morales, whose work isn’t always the most consistent, but who manages to not only nail the action moments, but to wring every last ounce of humanity out of the characters. Drew, I’m eager to see if you got as much out of this book as I did. Did you see the same similarities and differences between these two teams that I did, and what impact do you think they’ll have on the future of our heroes? Do you think Namor’s “I regret…many things” was an apology to T’Challa? And I know that fight scenes are essentially irrelevant in this title, but I’ve still gotta ask: The Illuminati vs. the Great Society in a straight-up fight, who wins?

Drew: I mean, this is essentially the “Marvel vs. DC” debate on the page, right? We spent a lot of time discussing the similarities between the Great Society and the Justice League when we discussed issue 16, and Hickman is only more explicit about those similarities here, having Namor basically explain the philosophical differences between the Big Two.

Now, that could refer to the heroes themselves — DC is often characterized as featuring immaculate demi-gods, while Marvel is better known for its fallible, human characters — but it could also refer to larger editorial philosophies. Is “the inevitable” the thoroughly modern, cross-platform approach Marvel has taken? Is it good that Marvel has given in to those forces? Is DC noble for resisting them? Is DC even resisting them, or just bad at adapting? This scene is essentially neutral on these points, allowing us to project our own meaning and come to our own conclusions about which philosophy is ultimately better.

Until, that is, the Marvel guys win. I mean, come on, this is a Marvel series — imagine what would happen if Hickman just up and killed Iron Man, Mr. Fantastic, The Hulk, et al. — they have to win eventually. Until that time, though, I expect plenty of interesting commentary about how Hickman views the difference between these two publishing houses. In that light, Morales is a slyly meta-choice. Patrick pointed out his long-standing (and well-known) affiliation with DC when we discussed issue 16, but it bears repeating that this looks like a Rags Morales book — that is, it looks like a DC book. That actually goes a long way to neutralizing the hometeam advantage.

Spencer, I loved your point about the Norn sacrificing his free will, but I’d like to posit that this is actually a clever exaggeration of how decisions alter our future, anyway. That is, eliminating an option in the future is the same as making a decision before the fact — or what you and I might call “making plans.” I’ll occasionally meet someone so fond of spontaneity  that they are utterly averse to committing to any kind of plan, but most people wouldn’t see choosing where to go for lunch as a loss of free will. Indeed, even bigger decisions — where we go to school, if/when/who we marry, if we accept this job offer or wait for a better one — feel more like exercising free will than of degrading it, but when you look at it another way, we’re effectively eliminating any future where we had made the opposite choice. 50% of your futures are unceremoniously cast aside every time we make a binary choice.

In that light, maybe Hickman is advocating for a world where we don’t need to choose The Illuminati or the Great Society, or Marvel or DC — we should keep both options open to us as long as possible, lest we limit our options in the future. Is this Hickman regretting an exclusivity contract (though he seems to find a clever way around it here), or is he simply rallying against fans who insist that one has to be better than the other? However the Illuminati ultimately end up on Earth 4,290,001, it seems like they might bring some Marvel fans along with them.

Or maybe this really needs to be read as a siste piece to the most recent arc in The Avengers, which saw The Avengers of another world in much more classic costumes, in which case the “choice” features the dimension of time, as well. There’s no reason we have to insist that Silver-Age so-and-so was the absolute best when there’s plenty of room for new favorites all the time. That’s a strangely positive note for this generally grim series to end an issue with — especially after basically riffing on the even grimmer DC heroes — but it’s a celebration of the medium that makes all of this grimness possible. Either way, I can’t wait to see how this fight pans out.