Do we… check for a pulse or… did he even have a pulse? Do we know?

Patrick: Superhero murder mysteries are a trip. In a traditional murder mystery, the audience should all have the same basic understanding of the rules of the game. That way, we’re able to play along as detectives in our own right. Half of the fun in watching a fictional detective solve a crime is feeling like you’re one step behind, just a shade less insightful than hero of our story. But superheroes live in a different universe, with scores of different rules that change and contradict each other throughout the course of history. The abilities and motives of the murder suspects could be…literally anything — you know how many of these characters can alter reality? The first proper issue of Original Sin sets a wildly complicated stage, and while I don’t think I have a chance in hell of reaching the conclusion before our heroes do, I do have a sense of what’s at stake for our lead detective: the original Nick Fury.

NEWFLASH: Murder On The Moon!

Yes, the unthinkable has happened: [premise of the series]. The promotional material for this event has been ham-handed enough that the gruesome two-page splash you see above feels mostly gratuitous. The Watcher has been shot in the head and his eyes have been gouged out. And while the eyes of the being that has witnessed everything are of some concern to the Avengers, Uatu’s place as also been looted, letting Watcher-knows how many mega-weapons out into the world. Captain America implores Nick Fury — the older, whiter Nick Fury — to take the case.

What remains of the issue is simple introduction. Fury recruits Black Panther, Ant-Man and Emma Frost; Doctor Strange and Punisher (who, hilariously, seem to be working together already); Moon Knight, Winter Soldier and Gamora (this is easily the strangest min-team in the bunch); and Thing and Spider-Man. Those last two heroes were actually just fighting a Mindless One who had his hands on the Ultimate Nullifier, which is a weapon that Sam Alexander (aka Nova) left with the Watcher about a year ago.

We’re introduced to a lot of our characters, but as of yet, there doesn’t seem to be much in the way of clues. Nick has a set of locations that he’s sent his troops to explore, but beyond that, the issue establishes frustratingly few intriguing details. Right at the end, we do get our first glimpse at a pair of characters that we might infer to be the murderers. At the very least, they have Uatu’s eye.

Speculating on their identity might be the only fun we get to have with the mystery at this point. I’m getting nothing off those costumes, but their conversation about evolving and changing points me to Avengers 10, wherein some of the Avengers went in to investigate the disappearance of the Canadian Avengers at the Origin Bomb impact site in Regina, Saskatchewan. That was one of the more Twilight Zone-y issues of Avengers, and it has yet to pay off in any meaningful way. If one of these two is Validator, I’m going to be an insufferable braggart about having called it. But if this has nothing to do with those guys, I’ll deny it to my grave! TO THE GRAVE!

Mike Deodato’s artwork sets an appropriately moody tone, aided in no small part by Frank Martin’s atmospheric coloring. There are an awful lot of white backgrounds in the issue, and as we get deeper into this story, the rate at which random white lines create unnecessary panel-divisions goes up. In fact, that whiteness seems to be a shorthand for information we don’t know, or don’t get to have. It’s abundant as the disparate teams are joining up, echoing the confusion we might be experiencing. For example, check out how much empty page there is as Ant-Man and Emma Frost meet. Or Strange and Punisher. Why would either of those sets be hanging out together? But that same mysterious whiteness is pervasive during the diner scene early in the issue — particularly when it comes to Fury.

He’s sitting next to the window and it’s night time, so we know that’s not literally light. Perhaps the bigger mystery here is What’s up with Nick Fury?

Taylor, how’d you like this first issue of the next big thing from Marvel? I’ll admit that I was a little overwhelmed taking it all in, and I’m reading every single one of these characters in other series right now. Was it overwhelming for you? Further, do you give a shit about the central mystery when you’ve got almost no chance of solving it on your own? And finally, we’ve seen a lot of shitty drawings of Emma Frost’s costume, but this one’s got to be the worst right? Put on a sweat or something!

Taylor: The costume is not great and like many a female superhero costume before it, it just doesn’t make sense. She’s going on adventures and traveling in jets and stuff. You would think she would want to wear something either more tactical or more comfortable. I’m thinking a combat vest or an old sweatshirt with the Xavier School logo on it. Of course, how exactly her costume stays on while she does so much as breath is a mystery we may never solve, unlike that which mystery which is central to this event.

I’m not sure I can accurately guess who killed the watcher given that I struggle just with the roll-call of do-gooders in play so far. While the Marvel Universe is great, it’s simply huge and, frankly, I don’t read enough comics to really know who would be motivated to kill the Watcher. That being said, I’m already having a hard time caring about this event one way or the other. The Watcher is dead. So what? While all of the heroes in this issue are concerned about the murder, we the reader (objectively more important than any of the characters) are never told why we should care about this mystery. It’s always a little upsetting when an immortal dies, but we haven’t been given a reason why we should care that the Watcher is dead aside from his big ol’ eyes being taken along with some of his tech stash. Murder mysteries are usually a fun story to read, but if we don’t care about the death, does it matter at all?

Still, I’m willing to chalk up my ambivalence to not knowing enough about the Marvel universe. Perhaps if I knew what made the Watcher important I would care more about him being dead. With that in mind, there are still things about this issue which I found genuinely enjoyable, the first of which stems from the title of the event. It’s called Original Sin and with a name like  that you better believe this event is going to have some Christian theology thrown into it. I’m a sucker for mythology of any type so I find this idea absolutely fascinating. I first real taste of this theology comes when Spider-Man and the Thing are fighting a Mindless One. Normally, mindless (duh) these creatures are bruits aren’t typically known for their higher order thinking. However, the one in this scenario is different:

So basically what we have here is a Mindless one who is suddenly aware of his “sin.” It’s a clear reference to the story of Adam and Eve, what with a creature falling from grace because of its acquisition of knowledge. Just like in the story of Genesis, the reason for knowledge being stigmatized as bad is a little convoluted. Apparently, the Mindless One, horrified at realizing what it is, has quickly developed a hatred for itself. After all, being a big purple killing machine probably isn’t something anyone wants to be. However, its use of the word “sin” in referring to its hatred is significant if for no other reason than the word choice. Is the Watcher akin to God? Did he somehow curse those who killed him? Those questions, and the theology surrounding them, are more interesting to me than the “who done it” mystery itself.

This issue also enjoys just some loony moments which happen too often for Aaron to not have made them intentional. Throughout this issue we are reminded that a superhero-team-up-murder-mystery is, in many ways, impossibly silly. In most mysteries the person who discovers the murder is the night janitor or a jogger or some other random passerby. In this story, however, the passerby just happens to be the god Thor, casually flying through space. 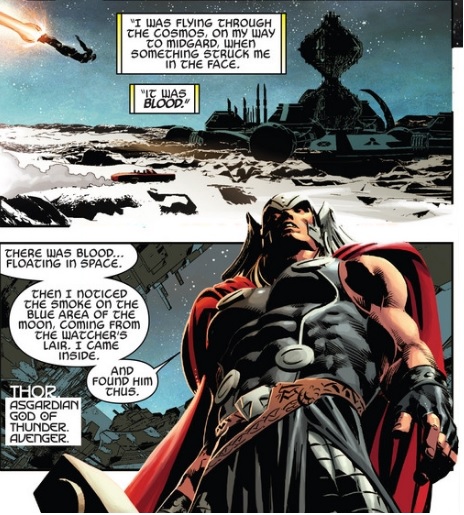 It’s the type of thing only possible in the world created by comics and I love it. It’s goofy yes, but in an endearing way. Aaron gets this and riddles his narrative full of these fun little moments. From Gamora being picked up floating randomly in space to the Avengers guessing what size of bullet would be needed to pierce the gigantic head of the watcher, we are treated to little nudges and winks that let us know comics are fun to read. It’s odd, but even though I don’t care about the mystery in this mystery, I still like it.