All of this is for nothing!

Shelby: What is the point of reading stories where our favorite characters suffer through difficult situations? Hopefully, by the end of the story, they will have learned something through their ordeal and grown as a character. But when an arc concludes, the ordeal is all wrapped up, and still we’re left asking, “what was the point?” you know the arrow missed its mark (ha!). Green Arrow 31 finally concludes its Outsiders arc, and I find myself agreeing with Ollie as quoted above on the way things turned out.

After Robert dies, Ollie goes after Komodo to end things once and for all, but not before grabbing the totem arrow and getting a jolt of enlightenment (more on that later). Poor, confused Emiko also goes after Komodo to end things once and for all, after finding out the man she thought was her enemy was just murdered by her fake, kidnapper “father.” A little enlightenment juice is really all Komodo needed, but Emiko shoots him anyway. Katana proves the old adage, “you don’t bring a fist to a sword fight” and stops the second shipment of chemical weapons. Ollie, tired of being constantly pushed around by every person and inanimate totem weapon around him, snaps the totem arrow in half and heads back to Seattle, where Diggle and crew just got their asses handed to them by Dragon and his new crew of baddies.

Oh man, that dose of arrow enlightenment. I know I always rave about how amazing Andrea Sorrentino’s art is in this book, but this time he’s really out-done himself. 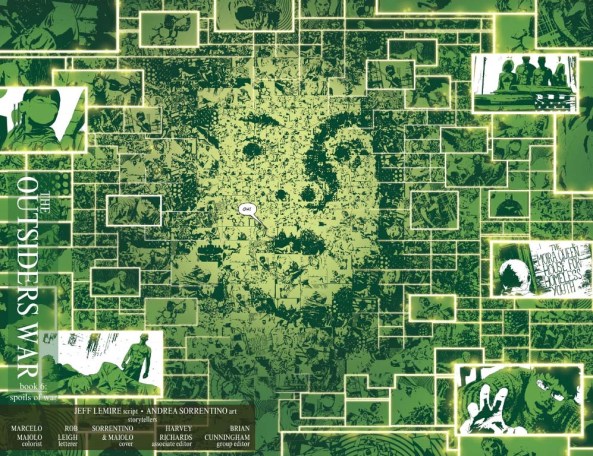 Do yourself a favor and click on that image to see it full size; it’s amazing. Not only do we get a bunch of fun future tidbits for the story (is that a military funeral I see? oh no, Diggle!), we also get a brilliant, mosaic-esque composition. It’s visually stunning, and a completely appropriate way to represent enlightenment. It’s a very personal, come-from-within sort of moment; even though Ollie is getting glimpses of things happening outside of him, he is composed of the images. For this one second, he is made of this information he can suddenly comprehend. It’s awesome in every sense of the word.

Like last month, though, Jeff Lemire’s story really left me wanting more. I really do feel like we ultimately didn’t get anywhere with this whole Outsiders saga. Robert is just as dead to Ollie now as he was to him before things got started. He didn’t even know the totem arrow existed before this whole adventure, and now it doesn’t exist. He did learn he has a sister, but she’ s on a completely different path than he is, to the point that he doesn’t really have her. We’ve got a net gain of zero on this story, which just makes me wonder why I read it at all. It’s surprising that this story started out so strong, with so much promising mystery and intrigue, only to just sort of fizzle out and flop on the ground like a dud firecracker.

I have to wonder  if Lemire didn’t do things that way on purpose. It was Ollie himself who pointed out that the whole Outsiders issue was for nothing.

Is Lemire making us the readers ask the question of what was the point of his latest arc? Seriously, what did Ollie get out of this experience? A renewed interest in justice? An even newer-found desire to be his own man and not let the expectations and plans of others shape his decisions? It seems to me that the biggest reason for this whole arc was to get Ollie out of Seattle so Dragon could take it over. This whole, bizarre adventure featuring magic weapons, mysterious clans, and secret sisters was basically a distraction for Ollie so Lemire could move the pieces into place in Seattle. I want to trust Lemire on this, but that just seems like a cheap trick to me. A cheap, weirdly over-engineered trick. Spencer, help me out on this. Am I looking too hard for a reason to like Lemire’s last couple issues here because disliking Jeff Lemire feels alien and uncomfortable to me? Or was it all really for nothing?

Spencer: Shelby, I certainly can’t blame you for feeling disappointed in this issue, and I’ll even admit to feeling a little disappointed myself, but I do think you might be underestimating Lemire a bit here. This storyline is only “pointless” if we never see the Outsiders again, and Lemire’s invested too much time developing the mythology around these clans for this to be the last we see of them. I’d almost guarantee that we’ll see this story followed-up on.

Regardless of any potential follow-up or not, though, this issue itself does feel anti-climatic, especially in the way it basically leaves Ollie no different from when he began. That said, I still found myself almost cheering out loud when Ollie snapped that arrow and abandoned the Outsiders. Ollie’s never seemed all that interested in the Outsiders’ affairs, and he’s largely spent the entirety of Lemire’s run being moved around like a pawn in their machinations, so this moment was a long time coming. There’s something sickly amusing about how little Ollie cares about the Outsiders’ affairs, about how he’ll use their sacred magic arrow as bait, and there’s something immensely cathartic about his decision to finally leave them behind.

I can’t help but to compare Ollie’s situation to a family attempting to control their child’s life. Sometimes a parent tries to live vicariously through their child and pushes them to achieve no matter what the cost; in many ways, this is what Robert Queen has done to Ollie. Sometimes a family has more noble intentions in mind as they try to push their child into a career, extracurricular activity, religion or relationship, but it doesn’t change the fact that the child has the right to make their own decision, no matter the consequences. Magus and his followers (some of whom actually are Ollie’s family, making the comparison all the more apt) seem to genuinely want the best for Ollie, seem to genuinely think him leading the Outsiders is the right decision, and maybe they’re right, but that doesn’t mean they should expect Ollie to automatically go along with their plans. Like any child, he has the right, the obligation, to choose his own life, no matter what anybody else may want for him, no matter whether it’s the right decision or not, and again, there’s just something so cathartic about Ollie taking control of his life in this manner, no matter how strange it may seem narratively.

Ollie’s little sister Emiko is actually facing the same dilemma, and considering that Komodo is more outright villainous than any other character in the title, it’s equally satisfying to see Emiko reject her fake father and reunite with her family. That said, Emiko’s decision is much more troubling than Ollie’s. Emiko is so young, and killing is all she knows, so it doesn’t feel like she has the options Ollie does, and she certainly hasn’t thought her decision through the way he has. I don’t think anybody present is in any position to deny Emiko what she wants, but I only hope she doesn’t come to regret her choice.

Actually, though, by focusing on Emiko instead of Ollie I think we’re closer to figuring out what’s important about this issue. Despite his name being on the cover, Green Arrow’s never been the most important character in his own book. Lemire’s Ollie is an interesting character with a well-defined voice, but he’s also a rather static character, and Lemire’s instead focused most of his run building up and defining the world and supporting cast around Ollie. We may’ve been wrong to expect this story to change Ollie; perhaps we should be looking at how it’s affected his supporting cast instead. 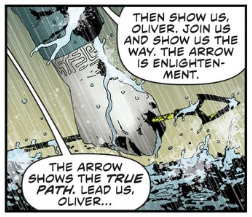 As I said earlier, it’s unlikely that this is the last we’ll see of the Outsiders. As seen in the image above, Magus seems dead-set on having Oliver lead the Outsiders, so I doubt he’ll give up his pursuit that easily. The loss of the leader he was grooming may drastically change the trajectory of these characters; they could spiral into villainy, or they could stick even closer to Ollie and his world. Magus and Shado have spent the last few storylines trying to make Ollie a part of their world, so switching things up could have a profound effect on the Outsiders. It’s a common trope for superheroes to provide hope and inspiration and a role model for people to strive towards; there’s also a common trope in shonen manga where the protagonist almost unintentionally makes allies out of former enemies because of their heroism and sheer stubborn enthusiam. I could definitely see the Outsiders following this trend, falling sway to Green Arrow’s heroic influence; in fact, I’d love it if they did.

No matter what strength and weaknesses Lemire’s story may have, Sorrentino continues to surpass expectations bringing that story to life. Shelby already posted my favorite page of the issue, so I’ll go ahead and post my second favorite instead: 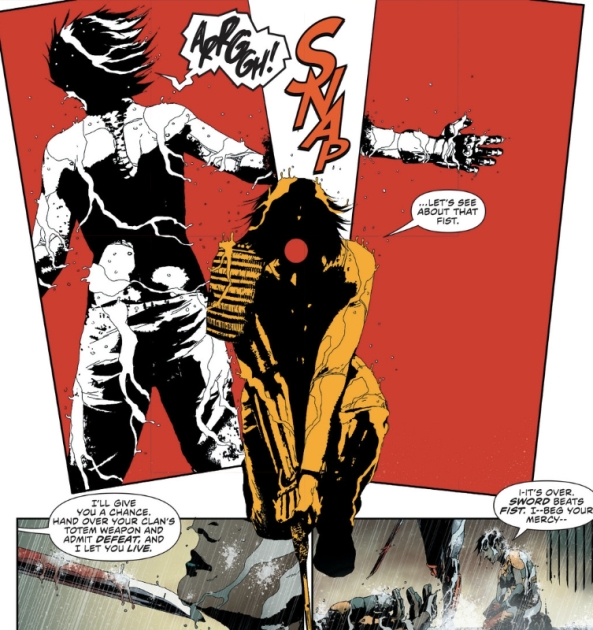 When discussing Justice League United recently I mentioned how McKone using Sorrentino’s signature inset, monochromatic panel trick to depict raw violence felt strange after seeing Sorrentino so often use it to depict more low-key, technical moments, so I was both surprised and a little pleased to see Sorrentino expand and change his use of the style to show the sheer violence of Katana’s brutal dismemberment. Plus, this moment is just plain cool, and I can never argue with that.

Sorrentino also sells the crap out of that final page, giving this motley array of D-List villains (Killer Moth!) some excellent makeovers that actually makes them look worthy of sharing panel space with someone of Richard Dragon’s calibur. 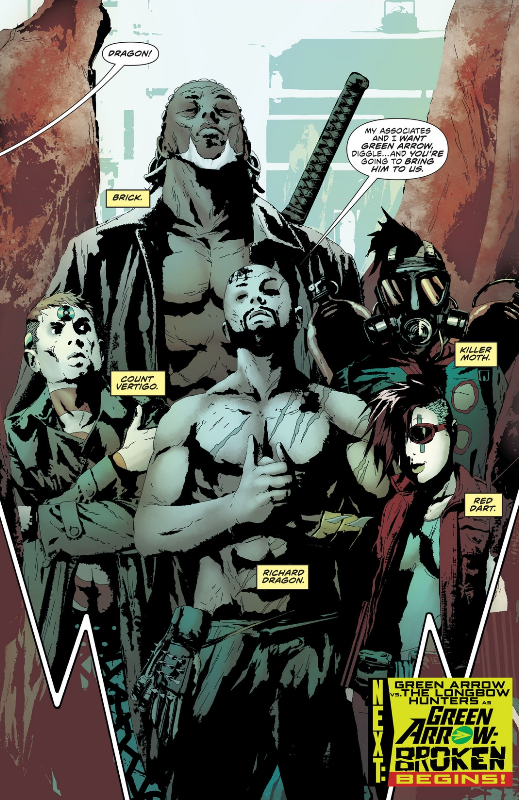 This upcoming storyline has me more excited for Green Arrow than I have been in a while. I don’t think the Outsiders War was a waste, and I look forward to seeing what happens with those characters in the future, but I’ve got to admit, the idea of this title returning to some more standard superheroic action is definitely appealing right now.