Shelby: I’ve only been reading monthly comics for a couple years: basically since the New 52 launched. Even with that relatively short history with comics, I feel pretty jaded when it comes to origin stories. If I don’t already know it backwards and forwards, I’ve seen enough origins to get the gist of it. Tragically lost parents at a young age, science experiment gone wrong, coming-of-age gaining of powers (be they magical or otherwise) — it’s easy to roll your eyes at a new origin story because you think you’ve already seen it. Felipe Smith and Tradd Moore have embraced that origin spirit with their All-New Ghost Rider, but have somehow managed to do so in a way that feels new and relevant. It doesn’t hurt that it’s completely gorgeous to look at, either.

If you haven’t been reading this title, teen Robbie Reyes was struggling to go to school and take care of his special needs brother in east LA gang territory. He was killed by mercenaries after taking a sweet car from the garage he works at out for a ride, but mysteriously brought back to life with a new, flaming-skull outlook. This issue, Robbie finally has a heart-to-heart with Eli, the vengeful spirit occupying the car responsible for bringing him back to life. Eli is offering your standard spirit of vengeance deal: the opportunity to get back at those who wronged you, the chance to fight for a better life for your loved ones, etc. Meanwhile, Dr. Zabo/Mr. Hyde has his mercenaries out looking for the gangster who’s got his drugs. They shoot everyone at the garage Robbie works at, and then go after the gangster himself. Since Robbie is connected to Eli, who is tied to the car, it’s easy enough for him to find them, kick some ass, and be confronted by gang boss Grumpy, who is now completely hopped up on Zabo’s Hyde-drugs, which turn him into a horrifying, raging monster. 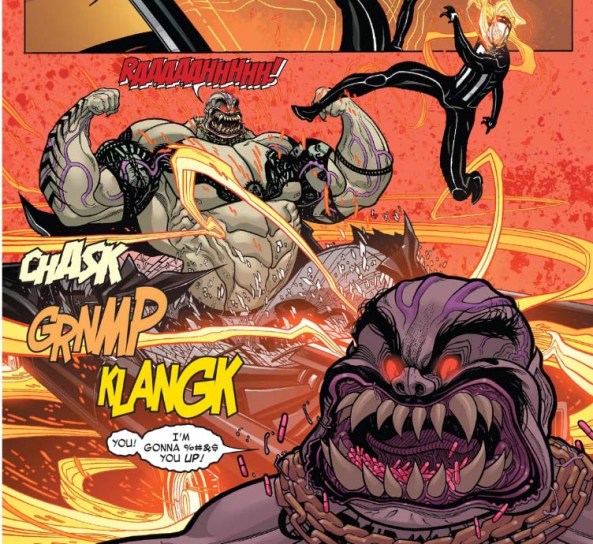 There’s really nothing new to this story; a young man dies while trying to do some good for his family, is resurrected by a vengeful spirit, and has to find a way to manage that. There’s just something about Smith’s take on this trope that feels so current. Maybe it’s because Robbie is dealing with gangs in LA that everything feels so relatable. In any case, despite the somewhat trope-y nature of the story, I am really enjoying it. I love watching Robbie have to deal with this probably un-trustworthy spirit of vengeance inhabiting this car. He wants to do right by his brother Gabe, and he wants to punish those who have made his life difficult, but we’re already getting into the difference between vengeance and justice with Eli, here. When Robbie finds his boss and coworkers shot by Zabo’s men, Eli’s answer is, “People are rubbish…All I need is your trust. Take the power to fight back.” It’s very clear we aren’t dealing with a spirit of due process and zealous advocacy, here; this is a spirit of vengeance, who will help you wreck havoc on those whom you believe have wronged you. It’s pretty easy now to tell the bad guys from the good; I mean, we’re dealing with an 18-year-old kid with a handicapped brother vs. gangbangers and bullies who steal wheelchairs. I think, however, that Smith is doing a great job laying the groundwork for some slightly less black-and-white situations for Robbie and Eli to deal with in the future. It’s easy to see, as an outsider to the story, that Eli is maybe not the most trustworthy possessed car out there; it’s just as easy to see how, from Robbie’s point of view, this could be the big thing that really turns life around for him and his brother. I’m looking forward to seeing that struggle play out.

I’ve mentioned it in past round-ups and even in the intro to this very post, but Moore’s art is what really sells this book for me. In an interview with CBR before issue 1 hit the stands,  Moore recites some of the questions he asked himself when designing the character: “What if Death joined Daft Punk? What if Satan became a Power Ranger? What if Speed Racer went to Hell and came back a slasher villain?” 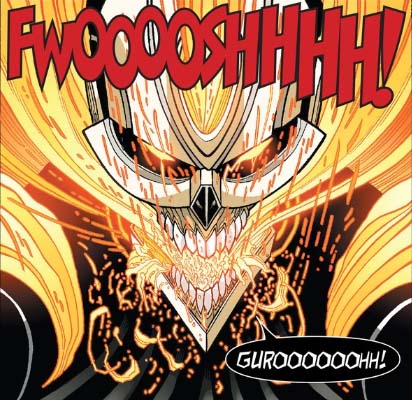 I ADORE Moore’s take on this character; I love its sleek, angular, terrifying appearance. All his figures are somehow very cartoony and very sharp at the same time. It’s an unusual visual approach that is unlike anything else out there right now; honestly, the story on this book could be total crap (which it isn’t!), and I would read it for the art alone. Moore has been added to my list of must-look-at artists, with the likes of Yanick Paquette and Jae Lee. Spencer, what do you think of this new take on Ghost Rider? Are you happy to see Smith forging his own path in the Ghost Rider franchise? Do you think Gabe is ever going to get himself a new wheelchair?

Spencer: They should really just give Gabe Professor X’s wheelchair — it’s not like he’s using it.

I share your jaded feelings towards origin stories, Shelby; I read the first three issues of this title in one sitting in preparation for writing this review, and if there’s one real criticism that popped into my head, it’s that Smith and Moore are moving through the origin story too slowly. That said, I like what they’re doing with the world and the characters so far. Robbie is insanely sympathetic, a good man stuck in a hopeless situation, the challenges he faces each day so severe and unfair that the audience can easily buy into the idea of vengeance that Eli is selling.

Still, as appropriate as his cries for vengeance may be, I don’t trust Eli as far as I can throw (drive?) him; even if he absolutely believes what he’s saying, there’s just too much evil laughter peppering his speech for him to be anything but a deceitful trickster. Does Robbie actually have any choice in becoming Ghost Rider? We don’t know how Eli was able to resurrect Robbie; if Robbie turned him down, would he have let Robbie die all over again? How much control over Robbie does Eli actually have; could he be manipulating him without Robbie even knowing?

Smith does make sure to show that Robbie has options other than vengeance available to him, though — even if he perhaps literally can’t purse them at the moment — through the character of Mr. Wakeford.

Wakeford represents a path of redemption, as opposed to the path of vengeance offered by Eli. The idea of redeeming such one-dimensionally evil villains can seem absurd, and I can’t blame Robbie in the least for not considering it, but Wakeford’s very presence convinces me that there might be more merit to his philosophy than there initially appears to be. After all, Wakeford’s a devastating combination of meek, white, and nerdy, yet he survives his treacherous students seemingly unrattled, his optimism fully intact. He’s doing something right.

Moore’s character designs serve to further emphasize the moral alignments of the cast — no matter how simplistic or complex. As the most innocent characters, both Gabe and Mr. Wakeford are illustrated as clean-cut and childlike; meanwhile, all the villains — from Zabo’s men to the gangsters and pawn shop owners to Grumpy himself — are various levels of ugly and grotesque, with Grumpy often coming across as downright feral even before his drug-fueled transformation. 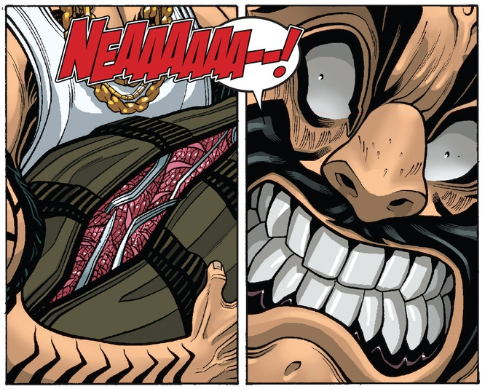 Meanwhile, Robbie straddles the fence somewhere between these two extremes; he’s too handsome to be one of the gangbangers, but still has an air of rebellion to him that separates him from Gabe and Wakeford. Robbie may essentially be a good person, but his transformation into the new Ghost Rider has left him with the possibility of ending up with either one of these groups, depending on how he plays his cards.

There’s actually quite a few transformations in this issue, and much like Moore’s designs, they too seem to represent a character’s true nature. Grumpy, for example, barely changes when he transforms; he’s already a monster, the pills are just enhancing that. Dr. Zabo, meanwhile, is clearly quite different from Mr. Hyde, but Hyde is still likely a part of Zabo’s own psyche, repressed and buried until the pill brings him to the surface; Zabo’s transformation is literally unleashing the monster that’s buried deep within his soul.

So what about Robbie; what does his transformation into Ghost Rider say about him? I’m honestly not sure yet. Ghost Rider is historically a spirit of vengeance, but that doesn’t mean that Robbie couldn’t use him to advantageous ends; if anything, Ghost Rider may represent possibility, a chance for Robbie to finally fight back and take control of his life, but also with a chance of totally losing himself in the process.

The fact that it took three issues for the audience to be introduced to some of All-New Ghost Rider‘s most important characters and themes is exactly what I was talking about when I said that it felt like we were moving through the origin story a little too slowly, but still, the dilemmas and possibilities they present go a long way to keeping this origin story fresh and interesting — as does Moore’s gorgeous, stylish, thoughtful artwork. Perhaps most importantly, this origin story has me rooting hard for our protagonist, so in that sense, I’d say it’s a smashing success.