Spencer: Just the other day, Drew and a few of our readers took to the comments to discuss how difficult it can be to talk about our favorite titles, books that are so good that words sometimes just fail us. I felt that way in the days following my first reading of Brian Posehn, Gerry Duggan, and Scott Koblish’s Deadpool 28; this issue may not be as dark or emotional as some of the previous, but it succeeds at everything it sets out to do with such effortlessness that it practically leaves me speechless.

Deadpool and his new wife Shiklah are on honeymoon in Japan. Wade’s carrying a briefcase full of cash that some pint-sized thieves quickly swipe; when the lovebirds attempt to take it back, the thief’s friends (part of a Fagin-esque child thievery ring) sic some suitably anime-styled monsters on them. The Yakuza and some Hand ninjas — both with their eyes on Wade’s case — join the fray, and the whole thing rapidly escalates into a city-wide game of tag that only ends when a very pissed off Shiklah starts eating her opponents. 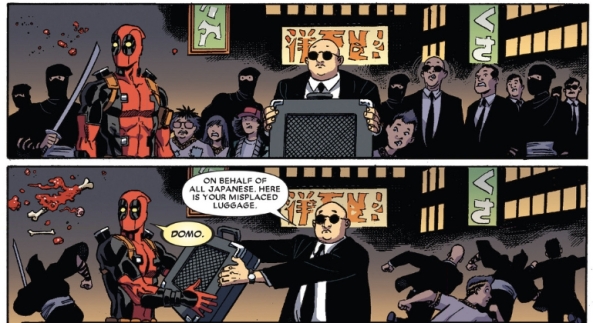 That’s easily my favorite moment in the issue — it’s an easy joke, but Posehn, Duggan, and Koblish all display excellent comedic timing, and Koblish’s facial expressions are totally on point, from the mix of terror and revulsion worn by most of the crowd to the stoic panic on the face of the guy carrying the case to Wade’s unwavering expression, an intense stare that could come from lust just as easily as it could come from horror. It’s not easy to pull off comedy with such panache, but the creative team makes it look effortless, and that holds up for pretty much the entire issue.

The issue’s also jam-packed with jokes in a way that reminds me of the early issues of the title (or of Airplane!) — if a joke doesn’t work, don’t worry, two more are coming right up after it! Japan seems to be a fertile source of gags for Posehn and Duggan and they mine it for all it’s worth, starting with the obvious references (there’s two Pokemon gags, for example) and moving onto more tangentially related stuff, such as this seeming shout-out to Kill Bill, which is in its own way heavily inspired by Japanese culture.

Koblish and colorist Val Staples put in impressive work with this panel, differentiating it from the rest of the book (or even from Wade and Shiklah in the background) through the use of heavy shadow and darker colors.

Koblish and Staples are on fire throughout the whole issue, actually; at first I found some of the early pages a little crowded, but I think they’re purposely that way, with the panels crammed full of people and backgrounds and Staples’ use of a bright, neon color pallet representing the strange, bustling nightlife of Tokyo. Even the layout of the pages sometimes feels crowded, but again, that has to be on purpose; Koblish sometimes fits ten or more panels on a single page — rarely does a page have less than five — but this helps to keep up the madcap pace of the issue, as well as allowing the creative team to fit this entire story within a single issue. Moreover, while things may sometimes get crowded, they’re never messy or hard to follow.

This page, in my opinion, shows off the very best of this issue’s art; the many small panels and creative layout keeps things high-energy without sacrificing coherency, and the decision to drop the backgrounds especially helps establish that. Staples’ use of color in the backgrounds is particularly clever; the colors progress in order through the rainbow (thanks for helping me memorize that, Geoff Johns!) which helps to propel the narrative forward, and the colors even seem to match with the characters in the panel just often enough that it can’t be coincidence.

If this issue was just a series of madcap chases, particularly well-constructed jokes and excellent art I’d still call it a success, but Posehn and Duggan also instill the story with real emotion, and that’s what makes it truly exceptional. Deadpool and Shiklah’s relationship, for example, is still fascinatingly sweet and functional. There’s an affection and easygoing rapport between these two that’s both comfortable and hilarious, and it’s all the more special because we rarely see Deadpool interact with people this way. The couple’s still in their honeymoon phase, but that doesn’t mean they don’t fight; indeed, the way they clash somewhat but quickly smooth it over and make up is surprisingly realistic, especially for an insane, mutilated mercenary and the queen of the underworld.

Still, the true emotional center of the issue comes from the ending: turns out that Deadpool and Shiklah are in Japan to hand the briefcase full of cash over to Kim, the North Korean Nightcrawler-clone Wade helped rescue, so that he can use the money to help care for all those harmed by Butler and his experiments. Like I said above, this issue would work fine if it were just a madcap chase, if Wade just wanted his money back because it was his money, but giving Wade’s mission a more noble motive also gives all his actions more meaning — and, in turn, gives the issue itself more meaning — and that can only be a good thing in the long-run.

Again, I’m astounded by how much the creative team manages to successfully pull off in this issue, how much thought and work must have gone into it, and yet how effortless they make it all look. Scott, were you as thrilled with this issue as I was? What do you make of Kim’s collapse on the final page? Any idea how to say “Please, sir, may I have some more?” in Japanese?

Scott: I don’t really know any Japanese, but I might know more than Wade. The icing on the cake of those first couple panels you showed is the fact that Wade shortens domo arigato to simply “domo”, meaning he’s just saying “very much”. It truly is amazing how many jokes within jokes this creative team is able to cram into every page.

I don’t know what to make of Kim, but I do know that when a character starts coughing blood it means bad things are in store for him. As sad as it is to think Kim’s days might be numbered, I thought that was the sobering touch this issue needed. Obviously, this is Wade and Shiklah’s honeymoon, so the general positivity flowing between the newlyweds is fitting, but when you add in the heartwarming reveal that Wade did this all for Kim and his friends, I felt like things were going a little too well. Since when does Deadpool have such happy endings? Posehn and Duggan aren’t going to let Wade live happily ever after, but they’re letting him have a brief taste of marital bliss and forcing us to worry about Kim instead.

Considering my only complaint about this issue is that it’s so darn uplifting, I definitely share in Spencer’s affection for it. It’s almost impossible not to love this issue. The fun Posehn and Duggan had concocting this story is evident on the page; I can just imagine them laughing their asses off thinking of who else they could throw into that outrageous showdown. That sense of fun carries over into Koblish’s art and, especially, Staples’ colors. That this issue takes place at night is established entirely by the use of neon light — there really isn’t ever a clear look at the night sky. The characters are literally boxed in by color. 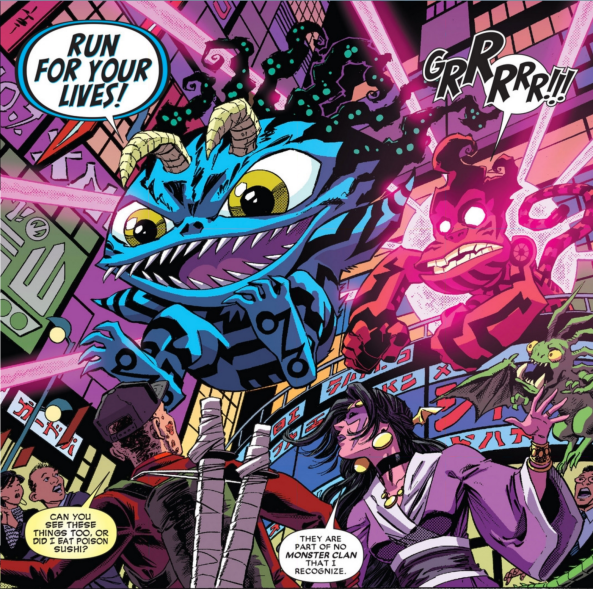 This panel looks upwards at a pretty extreme angle, and it’s nothing but purple and orange bouncing off the walls of skyscrapers as high as the eye can see. This artistic team does a fantastic job recreating the feel of a bustling downtown at night, with all its unnatural, claustrophobia-inducing, sensory-overloading goodness.

Spencer, you’re totally right about this feeling like the title’s early issues. The difference is, behind all the jokes, Wade actually seems happy for a change. His honeymoon won’t last forever, though, and something tells me Posehn and Duggan are setting up the dominoes of Wade’s life only to topple them again in devastating fashion. As long as they continue to provide enough laughs to mask the pain, we’ll be alright.