Drew: There was a point in my life, from my late teens through my early twenties, where I firmly ascribed to the notion that making an impression, good or bad, was better than going unnoticed. It made me a very outgoing person, but it also made me pretty obnoxious. I may have gotten a bit more cynical over the years (I’ve definitely gotten quieter), but I’m now fairly certain that outgoing and obnoxiousness may be more than just directly correlated; frankly, I think they’re the same trait. “Outgoing” is the term we use when we find that kind of extroverted behavior charming, but it doesn’t take much to see those same behaviors as utterly grating. It forces us to walk a tricky line — we don’t want to be faceless cookie-cutter bores, but we also don’t want to be so fixated on the beat of our own drums that we turn people off (at least, not everyone).

Art walks a similar line, struggling to distinguish itself from the pack without alienating its audience. All art exists on a continuum of underdone to overdone but the vanguard has always been on that overdone edge, as artists push the envelope of taste ever further from the known. I don’t want to suggest that Secret Avengers 3 is quite on the bleeding edge of comic book trends, but it certainly toes the line of obnoxiousness. I know that sounds like a harsh criticism, but I really don’t mean that in a bad way. I may not mean it in a good way, either, but it’s certainly not all bad.

The issue opens with the Secret Avengers getting a brief from Maria Hill on their next mission: Phil, Natasha, and Jessica are headed in to thwart your standard black market arms deal, while Nick and Clint head out to track down The Fury. It’s incredibly straightforward, plot-wise, but writer Ales Kot distinguishes this issue by packing on as much quirk as possible. The villain here is a failed (and extremely self-conscious) poet, Natasha’s decision-making process is depicted as a multiple choice in a text-based RPG, and Jessica talks down a suicidal bomb by suggesting that he’s missed out on caramel gelato. It’s a surprisingly silly issue for this series, and I say that knowing full well that the resolution in issue 2 revolved around a mouse with a hypodermic needle attached to it.

Obviously, silliness has always been part of this volume’s DNA (it does feature M.O.D.O.K., after all), but for me, the question of where the silliness comes from hasn’t quite been resolved. Take the ever-quirky introductions to the team.

They’re obviously more there for color than to actually convey any information, but it’s not entirely clear to me what we’re meant to take from that color. Like, who is making these observations? Us? Some omniscient narrator? Perhaps Maria Hill (whose perspective we’re ostensibly taking for the moment)? I have similar questions about that RPG sequence in the middle of the issue — is that how Natasha actually sees the world, or is this a joke applied by a narrator? It’s not that I expect every joke to provide profound character insights, but at times, these feel like they come at the expense of emotional honesty.

And that’s not to say that this issue isn’t capable of emotional honesty — indeed, there are several fantastic moments here — just that they’re so enmeshed with zaniness that the narrative suffers from tonal whiplash. I mean, the climax of the issue snaps between Jessica talking down a sentient bomb, Phil overcoming PTSD, and Natasha fighting for her life. The disparity in how seriously these beats take themselves is palpable, occluding my ability to enjoy any of them fully. I understand and appreciate Kot’s desire to diversifying the tone — the best comedies aren’t afraid of seriousness, nor dramas humor — but the laughs here feel a little too strained to really belong next to actual character insights — it’s more Family Guy than The Simpsons, in that way.

Shelby! I know we both have our problems with comics taking themselves too seriously, so maybe I should just take what I can get. Am I just taking this all too seriously? This is supposed to be silly, so maybe it’s missing the point to quibble about the quality of that silliness? Were you able to enjoy the tonal range of this issue, or did the abruptness of the shifts distract you, too?

Shelby: I…don’t know? Is that an acceptable answer to any of your questions?

This title exists in a weird space between serious and silly, and, unlike similar titles like Thunderbolts and Deadpool, I’m not completely sure it works. You’re right in saying the humor feels forced; I think that’s this title’s biggest weakness. There are a lot of genuine moments, both serious and otherwise, in this book, but they get overshadowed by the gags. It’s like Kot can’t quite find the flow to this team and these characters; sometimes he hits it, and everything feels natural, but then it all gets bumped off course. The charming bits are, well, charming, and the off bits are still a little funny, so I’m generally positive on the book, but I honestly do not know how I really feel about it.

There is an interesting idea in that team introduction that you pointed out further. I was willing to forgive the ambiguity of the intro boxes as just a part of the gag, but there’s a whole, cryptic page before that line-up featuring the same boxes. 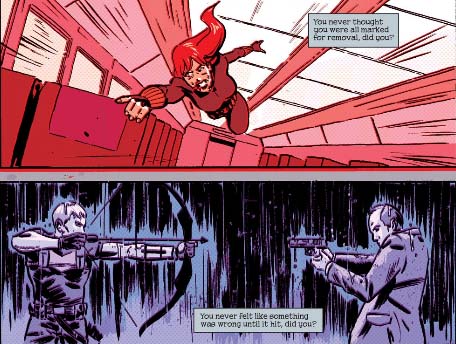 This seems like a pretty serious situation. We see nearly all the members of the team seemingly fighting for their lives: Fury is in a hospital bed, Natasha is in a crashing plane, Hawkeye is facing off against Coulson, M.O.D.O.K. is oddly domesticated. This raises all sorts of real questions about the team. What has happened to them? Is this a future fight, or some sort of secret fear situation? Why is Spider-Woman not there? And yet, the tiny bits of information which prompt the serious questions and the jokey character introductions are coming from the same, unknown source. These couple pages seem to summarize all the issues (?) I have with this title; it uses the same delivery for charming, sincere moments and too on-the-nose wacky zingers.

As confused as I feel about this issue, there are a lot of fun moments. I actually really like the bizarre, poet villain. It’s super cheesy, but in a way that I really enjoy. I’m a sucker for any burgeoning ladyfriendship, so I love watching Natasha and Jessica bond. 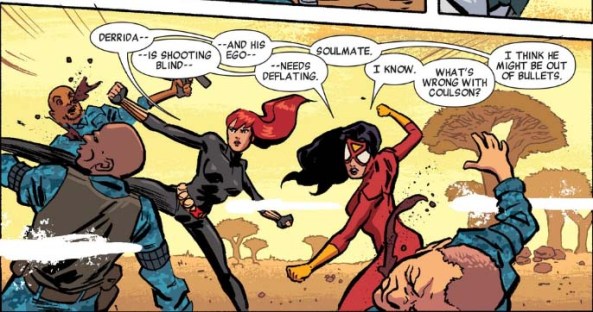 They seem to be balancing a friendship/mentor relationship, and I really like the way Kot is handling it. They’ve got that casual, bestie rapport that is so fun to read, and yet when Natasha needed to count on her new-to-the-team friend to get the job done, she could.

So, back to me not knowing how I feel about this title. I honestly can’t decide if it’s campy and dumb or sincere and clever; I’m leaning towards clever camp, with some sincere dumb sprinkled on top, but it might be too soon to tell. Also, going forward, I would like to be addressed as the King of Terror Poetry; after all, Retcon Punch is my Guernica.