Drew: I’ve expressed this before, but I’m somewhat uncomfortable with parenting stories — not because there’s anything wrong with them, but because I’m necessarily lacking the parenting experience to be able to appreciate them fully. With each issue of Saga, Brian K. Vaughan has put those concerns out of my head — I’m not the last man alive, either, but that didn’t stop me from enjoying his Y: The Last Man — but with issue 19, he takes that relatability a step further. Indeed, he so intimately catalogues the reshuffling of priorities of early parenthood that — in at least some small way — I fell like I actually understand what it might mean to be a parent.

TIME JUMP! Princess Robot has just delivered her baby, which would maybe put us on a timeline if we had a better understanding of Robot gestation periods. In any case, she’s holding out hope that Prince Robot IV — who we last saw wandering off into the fog on Quietus — is still alive. Meanwhile, Marko and Alana have gotten into a precarious routine, as Alana’s temperament jeopardizes her job as an actress with the open circuit, and Marko’s desire to give Hazel a normal life jeopardizes their low profile. The stress has put them at odds with one another, leading to an age-old spat (in which Vaughan thankfully swaps the gender roles):

They’re both feeling under-appreciated for the work they’ve been putting in for the family, and while Hazel’s presence diffuses the situation — they’re both doing it all for her — the seeds of bitterness have already been sown. That makes Hazel’s final page reveal that “this is the story of how my parents split up” feel tragically foreseeable, and like that eventuality may not be too far off.

But how did we get here? Alana and Marko’s relationship started out with them discarding their lives as they knew them in order to be together. Once Hazel was born, though, she became the reason to throw their lives away, which has made their love for one another take a backseat, and it’s suffered under the stress. Suddenly the differences that made them so passionate for one another is manifested in different parenting values and priorities. Plus, neither feels like their contributions are being respected. It’s a death-spiral for their marriage, and feels all the more tragically unavoidable thanks to Hazel’s hint at what the future has in store for them.

Not to get too speculative-y, but it’s hard not to see some autobiography creeping in, here. Namely: Alana has become quite the stand-in for Vaughan’s professional life. Back when Vaughan first introduced the concept of the open circuit, I remarked at how obvious the brightly-costumed melodrama was a stand-in for comic books. Here, Vaughan takes that notion a step more meta, allowing us to peer behind the literal curtain. 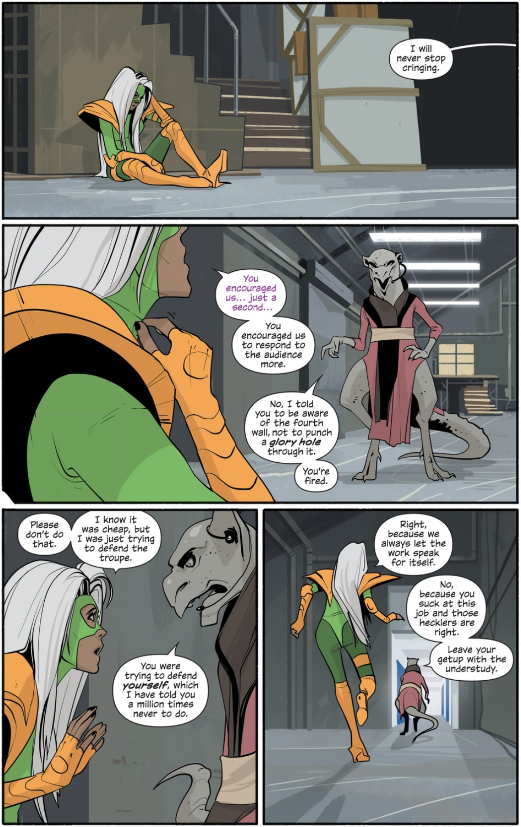 Not only can I imagine Vaughan having this conversation with his editor, I can imagine him having this conversation about this very scene. It smacks of ironic detachment, but Vaughan manages to keep it just shy of the brink, allowing him to get in a cathartic reply to his critics while admitting that it’s a totally cheap move that sacrifices the very illusion of the narrative. For me, this is simply Vaughan drawing our attention to the parallels between Alana’s story and his own.

But what do we make of that connection? The effect of the scene is a defense of selling out — Alana promises to hold her tongue in order to keep her job — but does that apply to Vaughan, too? I’ll admit, I was actually compelled by Alana’s decision here — she needs a job more than she needs her creative freedom — and it all hinges around Hazel. Alana is living to provide for Hazel, and the one time she’s motivated otherwise (whether she’s defend either the troupe or herself), is a mistake. It actually works to excuse a lot of bad art made by artists with kids, but it feels like unnecessary hedging from Vaughan here. Does he feel like this series actually needs some kind of explanation?

Fiona Staples’ art certainly doesn’t. Staples gets some room to trot out some crazy character designs here, and she certainly doesn’t disappoint. Friendo, the Rhinoswalrus is back, but se’re also treated to Alana’s director, a set designer, and a perhaps too-friendly young dance instructor. 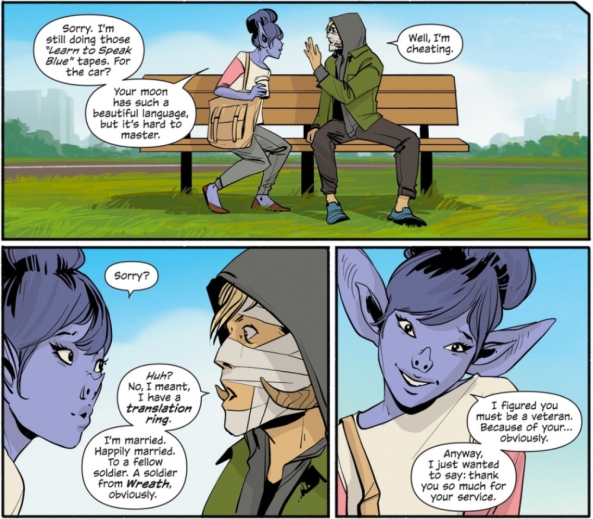 She’s clearly meant as a complication, but the specific nature of that complication isn’t entirely clear to me. Is the over-friendliness meant to foreshadow some kind of ill-advised romance? Or maybe she’s actually trying to gain Marko’s trust because she’s been hired to do so? Or maybe she’s on-the-level, but her prejudice against Landfallians will get the better of her when she discovers Hazel has wings?

Suzanne! There’s so much to talk about here, but the most pressing question in my mind comes from the last time you wrote about this series, where you expressed relief that you didn’t open to issue 11’s shocking opening page on a packed tram. This issue featured its own shocking first page — did you have the same luck with this time around?

Suzanne: I read the latest issue of Saga from the comfort of my couch, Drew. Yet I was a little shocked by that opening page, despite my familiarity with Brian K. Vaughan’s mix of charm and vulgarity. Fiona Staples is an evil genius, drawing such gruesome detail it makes me wonder what kind of reference images she used. And then I immediately regret that thought. My reaction was typical of a woman who wants to have children someday but doesn’t want to think of the messy details. It’s the equivalent of a guy watching someone get kicked in the balls in slow motion, up close. GAHHHH. This series pushes my comfort zone out a few feet from my usual comics fare. How could anyone forget the giant diseased testicles from Saga #7?

Moving on, Princess Robot’s resolve is impressive in this issue. She’s gaining on my (ever-growing) list of favorite characters in the series. Here she is having a baby alone with her husband presumed dead by most of Robot Kingdom. She experiences one of the most vulnerable moments of her life and doesn’t flinch, doesn’t doubt Prince Robot IV’s survival. With all of the hubris of royalty, she corrects her doctor’s assumption about naming her child and says, “I beg your fucking pardon.” As a parent himself, Vaughan could be making a greater point about all of the assumptions/stupid comments people make to new mothers or expecting women.

I love the transition from the Princeling’s birth to Hazel’s narration from her toddler years. The Princeling’s mobile of the solar system with Landfall, Wreath and Robot Kingdom hearkens back to Hazel’s exposition in the first issue. What better way to include readers then to remind them of where Alana and Marko were at the beginning? The politics of The Robot Kingdom and how they carefully choose their alliances are fun details that flesh out Vaughan’s world.

Alana and Marko’s relationship has always been the backbone of this series. The brief dialogue between Marko and the dance instructor makes it clear which direction their relationship will go. Cue Alana and Marko drifting apart, with neither of them fully meeting each other’s needs and having competing priorities. Cue a stupid affair between Marko and the dance instructor who really understands what Marko’s going through. I’m losing interest already and I haven’t even read the next issue. Maybe I’m a sucker for happy endings, but I hope the next few issues subvert my expectations.