Suzanne: It’s easy to get wrapped into other people’s expectations of you. Subtle messages and feedback from friends and strangers can inadvertently contribute to your sense of self. I’m reminded of this every time I walk into a comic book shop with my husband. The (male) store clerks start up a conversation with him and barely acknowledge my presence. Little do they know that he’s just keeping me company and doesn’t even read comics. So what is a comic book nerd supposed to look like? Would most people even consider women a part of the general readership? Stereotypes like the balding, Caucasian comic shop owner and socially awkward fans like Sheldon from The Big Bang Theory are still common in pop culture.

G. Willow Wilson tackles people’s expectations of traditional superheroes head-on in this issue. Kamala’s decision to morph into Captain Marvel to fight crime finally feels relevant and less racially precarious. More on that later, since Kamala is busy recovering from a would-be fatal gunshot from last issue. Adrian Alphona captures the little details like perspective as Bruno and Vick stand over Ms. Marvel in panic. Vick abandons the scene of the crime and leaves Bruno with a superhero riddled with bullets. Thankfully, her healing factor kicks in and adds a nice wrinkle to her power set. (She only heals when she doesn’t use her powers.) Kamala reveals herself to Bruno and puts on a sleep mask (with holes in it!) just as the local cops show up.

They question her briefly before giving the typical I-have-my-eye-on-you line. Kamala returns home in search of a costume and a second helping of motherly disapproval. She sneaks out with Bruno to find out what’s really going on with Vick. Fast forward to what may be Kamala’s first villain of the series: The Inventor. He’s holding Vick hostage in a shady basement of some abandoned house. DUN, DUN, DUN….

My favorite part of this issue is the local cop’s reaction to Kamala. They are incredulous when she calls herself Ms. Marvel and insist that she’s supposed to be: “You know. Tall, blond, with the big… powers.” Are they talking about Captain Marvel or Power Girl here? The subtext being that female superheroes should rival supermodels. Kamala responds by morphing into a bigger version of herself, either playing on the cop’s words or completely missing the point. I’d like to think that naiveté wins out here and she is showing off her new powers. This may be Wilson’s way of directly addressing Kamala’s ethnic background in the context of more traditional superheroes.

Bruno’s speech about Kamala being herself is also noteworthy. He argues that Jersey City doesn’t need an Avenger, it needs Kamala. The dialogue avoids drifting into afterschool special territory though. Bruno says it with all of the awkward feeling (and blushes) of a teenage boy. Certain moments in this issue feel both familiar and relatable, with dialogue that fits the characters’ age and experience. This is not a series that feels forced with “clever” dialogue that teenagers would never say. I’d still be okay with this series being a coming-of-age story about being from two cultures. The superpowers feel more secondary to Wilson’s greater plot. 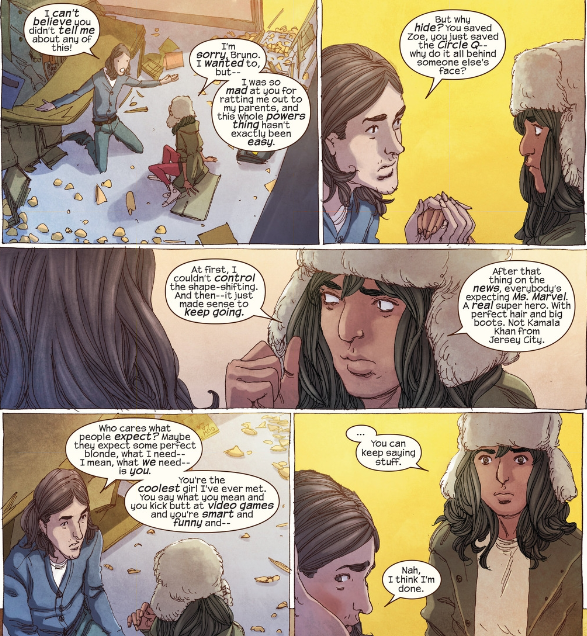 Drew, what are your thoughts on the introduction of The Inventor? And are you digging Kamala’s family moments as much as I am? I’m going to take a bet here and guess you’ve never heard of a burkini before and had to Google search it.

Drew: Hahaha. Yeah, I can’t profess any foreknowledge of burkinis, though I think the experience of having your mom buy you something totally dorky to wear is fairly universal. For me, it was a sweatshirt/sweatpants ensemble featuring some kind of busy Richard Scary cartoon scene. In my mom’s defense, I may have been an unusually self-conscious first grader, but these tensions only got worse through my pre-teen years, probably peaking when I was Kamala’s age.

That relatability is actually one of this series’ greatest strengths, which took me by surprise. For all of the talk about representation that this series has inspired, I expected it to tackle stories unique to the muslim teenage girl experience — stories that had been notably absent from comics, but also ones I may struggle to see myself in. There certainly is a lot of specificity here — Kamala is clearly not Spider-Man — but I’m struck by how universal her struggles are. Alienation, confusion, and awkwardly growing bodies that aren’t quite under control should feel familiar to any teen. That’s not to trivialize the “muslim” and “girl” portions of her identity — I’m sure there are plenty of elements there that I’m missing — but I am struck by how relatable the “teen” experience is across those other demographics.

Of course, it helps that Wilson writes that experience with such an assured hand. Suzanne, I’m totally with you in thinking that this would be a pretty fun series even if Kamala didn’t have any powers — and that’s coming from somebody who tends to be pretty wary of teen stories. Kamala’s a charming character, and I wouldn’t mind just spending some time seeing her interact with her friends normally. That scene where she’s digging around in her pants had me in stitches and (don’t ask me why) reminded me of my own friends in high school.

For me, the relatability of the home life stuff made me wince at the introduction of an actual villain. This series is at its best when Kamala’s costumed adventures are an exaggeration of her everyday life — her insecurities, her sense of humor — but starts to feel a little generic as we bring in actual comic book villains. It’s not that I have problems with robotic spiders (or the villains that invent them), but it feels like a jarringly sudden change of tone for a series that has heretofore featured much more organic problems. I’ll accept that these problems might be my own — what else should we expect from a superhero comic, really? — but I’m reasonably confident that they won’t bother me by the time I’m done reading the next issue. I was way too quick to dismiss the first issue, and now utterly adore this series, so I’ll forever be tempering my criticisms with a “wait and see” caveat. The awkwardness here might just be a growing pains, and I trust Wilson to navigate these waters with confidence.

It is interesting how much I’ve talked about my own expectations — what I thought this series would be, the kinds of problems superheroes are meant to face — when discussing this series. It’s also interesting to me that my complaints largely revolve around awkwardness, which may ultimately be temporary. It seems the themes of teenage experience has saturated the very structure of this series, making for a remarkably unified final product. It might be a little weird, but who wasn’t at Kamala’s age?