Patrick: Are you ever at a party and meeting someone new and they ask what you do? Conventional wisdom says that you should just tell the person what your day job is — “I work in an office;” “I’m a teacher;” “I work in fundraising” — but we all know that’s a woefully inaccurate representation of what you do. We’re all hobbies and clubs and jobs and passions and interests. Prioritizing those identities is hard, so we tend to just slide back to describing ourselves by where we’re employed. But maybe we should all be introducing ourselves by saying “I read comics and foster daily online conversations about them” or “I’m an improviser” or whatever. Our priorities say more about who we are than where we burn eight hours in the middle of the day, right? The Teenage Mutant Ninja Turtles are currently having their unified identity challenged by this very idea, as the looming threats of Krang and Shredder vie for the top of their priorities list.

There’s been a push-and-pull balance between these two sources of conflict for a long time, but this might be the first time the characters have ever addressed it. There are the more science fiction-y elements of the TMNT Universe, which are more clearly represented in this issue, and the feudal Japan stuff. I know that either way, we’re dealing with mutants and resurrection and all of that, but everything that has to do with the foot is decidedly of a smaller and more personal scope. When the technodrome becomes active, it’s not a family that’s in danger, it’s the entire world.

Why is the Foot stuff generally so much more rewarding then? Because we can’t actually grasp what it means that the WHOLE WORLD would be in danger. Personal conflicts, a family trying to stay together, growing up — we can understand because we can all relate. This issue takes the larger science fiction elements and boils them down to manageable size. Most of the issue takes place in the lab of Donny’s science bro: Harold. He is characteristically grouchy (and still uses the made-up word “obtruse”), but he starts to become interested when the tech involved in the hunt for the Technodrome involves a matter transporter. Just then Angel makes a weird discovery. 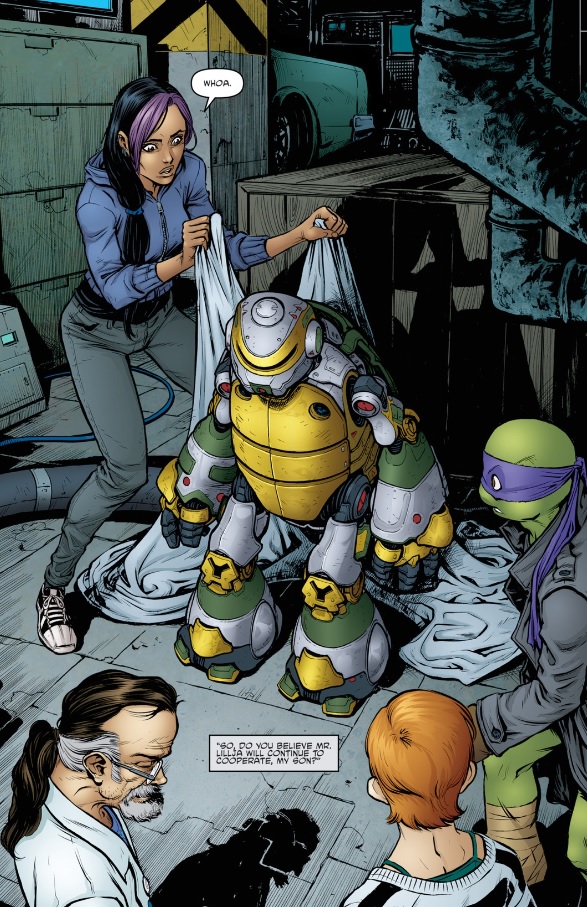 That’s another piece of TMNT lore introduced into IDW’s run: Metalhead. What I find so intriguing about his (its?) introduction in this issue is that it reveals Harold’s interest in his friend. He gives a wishy-washy explanation for why his security robot looks like a Ninja Turtle, but it’s clear that he’s taken inspiration from his buddy Donatello. Oh, and just about everyone points out how weird that is. When Harold activates the robot, it predictably goes nuts and attacks everyone, fulfilling its role as we understand it: evil robot version of the Turtles. Metalhead can still be that, but now he’s also a reflection of a chink in Harold’s emotional armor — a soft spot that he has for the Turtles.

By the end of the issue, Angel has donned another of Harold’s inventions, a mechanical suit with many of the same weapons as Metalhead. When Harold, who has forgotten her name a couple of times, asks who she is once more, Angel answers “I’m Nobody.” I’ll admit that I had to look that one up: Nobody has appeared in Turtle comics before. During the Mirage run of comics, he’s a cop that fights criminals by night as a superhero. That’s another piece of TMNT mythology introduced in this issue, and again its born from personal interactions between the characters. All of these crazy, technologically driven pieces of the Ninja Turtle canon are falling into place, but writers Tom Waltz, Bobby Curnow and Kevin Eastman are careful to ground all of it in these characters, making both our heroes and these concepts stronger.

Mateus Santolouco’s art is awesome, if a tad under utilized in this issue. So much of the story is a conversation at Harold’s lab, and it’s not until the last couple pages that the creative team leverages Santolouco’s gift for kinetic action sequences. The Metalhead design is pretty cool, and even when he’s not blocking action, Santolouco is able to find compelling ways to stage motionless panels. I absolutely love Donny checking out the robot.

There’s a nice symmetry to this panel and the acting on all of these characters is great — everyone reacts a little bit differently to this bizarre sight.

Taylor, I mentioned the Turtles’ other problems in the opening, but I guess there’s just one page committed to that conflict. In my mind, that was my main takeaway — that Leo and Splinter were unhappy with Donatello’s obsession with stopping the Technodrome. It’s interesting that that scene would be included at all, as it does draw attention to the fact that this issue is mostly diversion. None of our heroes are really working toward their goals at all. But by the end of the issue, we’ve got one more hero and one more…let’s call it a villain. I like the idea that the Turtles’ homecoming is less of a story and more a collection of little stories, but this certainly is a change of pace coming off the more tightly plotted City Fall and Northampton. Taylor, would you like to see more world building stories like this or are you ready to snap into one of these two adventures already?

Taylor: It is interesting that we get the cut to Leo and Splinter at all given that it doesn’t tie into the main story of this issue. At first blush it seems like it would have been wiser to cut to a sad Casey Jones meditating on his relationship with his father. After all, we saw him at the beginning of the issue, why not revisit that storyline? While that might have made the issue a little more tight narratively speaking, I think ultimately it wouldn’t have served the issue as well as the scene with Leo and Splinter does, as it highlights the differences between the two major conflicts we’ve been treated to so far in this series as well as showing us a new side to Leo’s character.

That scene actually stood out to me quite a bit and not because it was simply a one page interjection. Instead, I found it makes us think about the relationship between the Foot Clan storyline and that which deals with Krang et al. For the past several months we’ve seen nothing but Foot Clan action in the primary turtles series. Those wishing for developments in the Krang storyline had to get their thrills from some of the ancillary TMNT titles. This made it easy to forget about Krang and his plan to destroy the Earth as it presently exists. The Foot Clan storyline is just so damn compelling it makes it easy to forget about the other dangers facing those who live in the Turtle-Verse.

At the crux of these two storylines sits Donatello. He recognizes the importance of his family but he’s also well aware of the dangers of inter-dimensional beings. Perhaps it’s his scientific mind in action, but Donatello has consistently proved to be the one turtle most likely to strike out on his own in this incarnation of the turtles. It’s an odd play given that this is one of Raphael’s signature moves, but it totally works in this series. Because of this tendency, Donatello has befriended Honeycutt and Harold, which has subsequently led to his appreciation for the dangers science and Krang can bring to his family and the world. When we consider it, no one on Earth is more aware of the potential dangers they face than Donny. It’s a heavy burden and it’s easy to see why he takes it so seriously.

Luckily, Leonardo seems to be coming to his brother’s side. In that one page he has with Splinter, he acknowledges that Donny’s preoccupation with the Technodrome could be well worth it.

Significantly, Leo seems to disagree with Splinter. While the Splinter seems to think the Technodrome can wait, Leo isn’t so sure. We could chalk this up to the adventures Leo had with the Neutrinos but that rings a bit hollow with me. Instead, it seems like Leo, given his recent disenchantment with Splinter’s teachings, feels at ease disagreeing with his father and master now. His ordeal with the Foot Clan changed him. Before he followed Splinter with blind faith; now, he’s making his decisions based more on what he feels is right. It’s not that he’s trying to disobey his master by any means — he’s just come into to a place now where he feels more comfortable thinking about things himself. What a delightful development!

Santolouco’s art is charming as it ever has been. In this issue I really enjoyed his use of facial expression to show character emotion. It’s hard enough drawing emotion on human faces, let alone mutants, so I applaud his efforts in pulling off the feat well. I loved Harold in all of his grumpiness and I think that’s due in large part to all of Santolouco’s facial expressions.. 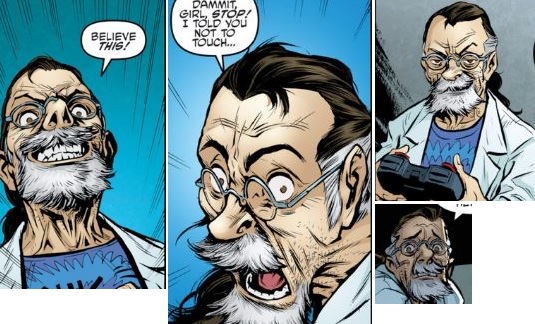 On the one hand he looks hyper-realistic (look at those throat sinews!) but on the other, he looks he could be at home battling Bugs Bunny. It’s a neat effect that keeps me tuned in to the character. Basically, Santolouco has hit the sweet spot when it comes to the uncanny valley. Harold is real enough for us to sympathize with him, yet cartoonish enough to allow for a wide range of emotions.

Lastly, I appreciate the obvious homages that Santolouco pays to TMNT history. Growing up, I had a Metalhead action figure which I loved. Maybe it was because his eyes were translucent red, or maybe it was due to his metallic finish, or maybe just because his design was great. 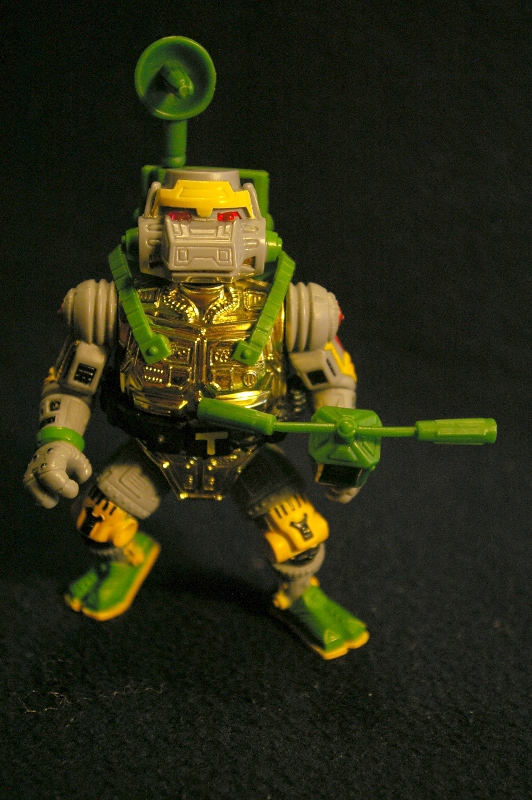 Whatever the case, it was one of my favorite turtle action figures. Personally, I love seeing Santolouco base his design on that of the TMNT series from the late 80s and early 90s. It hit a sweet nostalgia spot while also staying fresh.

And speaking of staying fresh I feel like this series continues to do so week after week. Honestly I’m fine with the Turtle-verse being filled out some more. I simply love its characters and mythology and I’m happy to spend as much time learning about them as I can.