Taylor: Madness fills an interesting role in our imagination. Just enough madness and you’re considered a genius. A little too much madness and you’re considered a nut. We tend to think of someone as being “mad” if they have any of a number of mental defects but retain enough of their personality to still be somewhat coherent. Perhaps the most well known madman of all time is Ahab. His singular quest to destroy the white whale consumed his entire life, even if he did retain the vestiges of a sane man. And that’s perhaps what makes him such a disturbing character. Despite (or perhaps because of ) his madness, he is charismatic. We forget that he’s insane sometimes and actually feel that his quest against Moby Dick is justified. Xavier is similarly hell-bent on killing the X-Men of the past, and similarly might have good reasons for wanting to do so. All-New X-Men 28 has me wondering if this quest is the errand of a madman or the product of love gone awry.

The X-Men are under attack from their future foes for the second time! It’s a bit confusing about how they’re back at this point and this issue serves to clarify exactly why that is. In the future, Xavier (son of the Charles Xavier) finds a half-mad Beast. Using his mental powers, Xavier gives Beast just enough lucidity to help send Xavier and his cronies back in time to battle the X-Men. The funny thing about the situation this go around is that they’ve learned a thing or two. From now on they’ll travel back and forth between the past and the future essentially hitting a reset button every time they mess up against the X-Men. It seems like foolproof plan, so what could possibly go wrong for them?

The plot of this series isn’t advanced in this issue so much as it is explicated. We learn how Xavier and Raze are going back in time and exactly why they are doing it. The latter aspect is what I found most interesting about the issue as it has obvious parallels to one of my favorite books. What’s interesting is that Xavier’s seemingly maniacal mission to kill the X-Men at first seems like a tired song-and-dance. 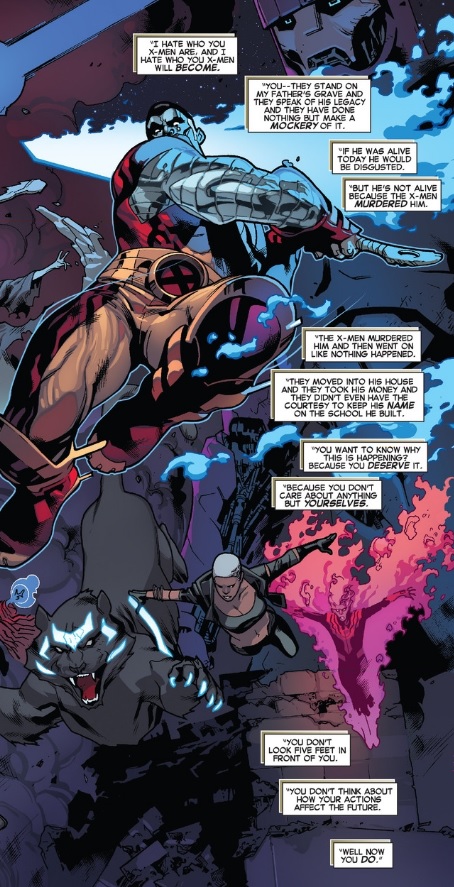 More than one X-Men hater has tried to obliterate the X-Men because they have wronged him or her in some way, so his quest for revenge for his fallen father is something we’ve seen before. Likewise, the complaint that the X-Men fuck up their world despite their good intentions is a charge that several of their adversaries have leveled against them. At this point we have to consider if Xavier is simply a “madman” evil-doer who has projected all of his rage about his life onto a war against the X-Men. While the raving villain wouldn’t be a unique touch to this series, it would give some motive to a character who otherwise doesn’t seem to have a lot of it.

But the argument of simple madness rings hollow for me. Sure, Xavier is a total ass-hat (as we see from his manipulation of Beast and the way he demands complete subservience from his team), but that doesn’t really speak to his maniacal quest against the X-Men. It’s only later on in the issue that we begin to see the real reason for his wanting to travel back in time and stop the X-Men from existing.

Yes, for all of his blustering about how much the X-Men are terrible, it would seem that Xavier is primarily motivated by love. Or at least something akin to love. We don’t know much about the relationship he had with his father but given Charles’ track record and the level of devotion on display by Xavier it seems like there had to be a deep bond there. In any case, this makes Xavier’s obsession with the death of the X-Men actually seem kind of reasonable. He’s a kid who just wants his father back. It’s hard to view him as a monster or a madman when taken in that light.

Ultimately I think that’s what makes this issue so interesting. On the one hand Xavier has some touching motivations but on the other he clearly seems out of his mind. He’s traveling back and forth through time and committing the same (or worse) crimes against the X-Men, all the while claiming it’s their due because they broke the very laws he’s violating. That seems crazy. Then again, he just wants to bring Charles Xavier back to life and who in their right mind wouldn’t want that?

What do you think Patrick — is Xavier mad or justly motivated? Even though his means are evil, could his ends be good?

Patrick: Yes! That last bit right there! Xavier’s definitely driven by one of the classic motivators: family. This issue keeps reiterating the point that Xavier and Raze have a special relationship — both abandoned (in one form or another) by their parents and rejected by a world that’s even grown to accept mutants. Think about it: the brotherhood are the living embodiment of how little Xavier’s dream mattered. These brother have to stick together, and their little echo-chamber is responsible for Raze’s suggestion to go back in time to just after their birth to try to destroy the X-Men. That’s far enough back that they won’t jeopardize their own existence, but not so far back that they could have the noble effect of rescuing Charles. So while there is familial love at the heart of this thing, I don’t see it as between father and son — in fact, unless I’m mistaken, Xavier never met his father — but between sons.

Just one more quick pieces of evidence to reinforce the idea Xavier and Raze are just kind of hellbent on exacting some revenge together: the rest of their team is burnt out X-Men. The team’s leaders are the only fresh, young mutants in the group, while Deadpool, Ice Hulk, Molly Haze, Xorn and Beast are all old, busted versions of characters we know in the present. They are not equal parts of the team, but brainwashed/manipulated into enacting Xavier and Raze’s will. This issue is very specific on that last point. While we get a whole story about how much Xavier uses his powers to reshape Beast’s mind, Bendis employs this chilling refrain of “I understand” to illustrate how truly powerless these “evil” X-Men are to resist their leader.

Man… poor everyone, right? Beast let his time travel sins drive him fucking crazy, but whatever happened to the rest of these guys is totally left to our imagination. The thing is, we don’t have to work that hard to see where they’d all come unraveled — it’s all just an extension of their normal lives. When we meet up with Beast in the beginning of this issue, he’s working out the time-line, muttering to himself about Ages of Apocalypse, Ultron, X, Aquarius, etc. We’ve seen this same chalkboard before, in present. So it’s nothing new that drives Hank McCoy to the brink of insanity, but business as usual. (We can save the specific observations for the comments, but there are a lot of crazy phrases on that chalkboard, the two most evocative I noticed were “Baxter Building Murder” and ” Avengers Disappear.”)

The place this issue suffers is in the present day. None of our hero X-Men get much active page-time. The notable exceptions are Jean Grey and X-23. I was pretty disappointed to see Jean uttering what has got to be her official catch phrase at this point: “Scott, kill me.” Bendis had made so much progress toward being something more than simply the Victim of the Phoenix, and watching her backslide into “character moment for Cyclops” irked me somethin’ fierce. Luckily, that situation is temporary and it’s only through Jean’s raw power that she’s able to fight back with those cool new powers she learned in space. Similarly, X-23 arduously pulls herself up of the ground, after having been left for dead. When our heroes beat back the future-threat, it’ll be because X-23 and Jean were able to get their shit together. Incidentally, how heroic is the page when X-23 wakes up? 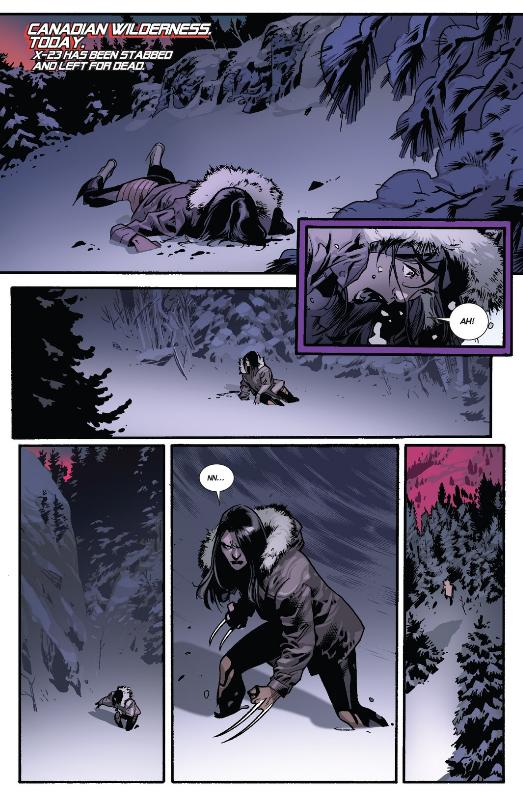 Brian Michael Bendis, not normally one to use omniscient narration, can’t help but affect a reverent tone for the phrase “X-23 has been stabbed and left for dead.” Then artist Stuart Immonen renders the thing like we’re in a samurai movie, and the heroic Ronin realizes he’s got a little more juice in him still. The best is that little sting of purple around the panel of X-23 pulling her face out of the snow — it’s just enough to draw the eye without being loud or out-of-place.

Also, come on, the stage is set for an awesomely symmetrical showdown. It’s Telepaths and their Wolverine-offspring squaring off against each other! If the next issue is just Jean throwing psionic attacks at Xavier while X-23 slashes at Raze, I’ll be totally happy with that.