Patrick: As I get older, I realize that I have to consciously fight my growing instincts to make Dad Jokes. My father, who we called by his first name, Lyle, was quite the connoisseur of these terrible, punny, embarrassing jokes. Nine times out of ten, not even Lyle thought they were funny, but his mugging for laughs at laughless lines elevated the experience to pure anti-comedy bliss. To give all Dad Jokes — and by extension, my baser humor instincts — the benefit of the doubt, their intent is never to be revolutionary or make you think or anything quite so sophisticated. Where a good joke relies on subverting our expectations, a Dad Joke plays into out expectations so hard that the refusal to be subversive is, in a way, subversive. But forget all of that: the Dad Joke is comforting because Dad is saying it. Deadpool 30 leverages our comfort with these kinds of jokes to distract us while getting to the real subversive business — developing, ironically enough, the identity of Deadpool’s daughter.

Deadpool’s back from the past with Disco Dazzler in tow. She’s his ace-in-the-hole against the army of vampires trying to muscle he and Shiklah out of their rightful place a the head of the underground monster kingdom. Meanwhile, Agent Preston traces the last known whereabouts of B. Utler’s brother, leading her to a quiet Winnetka home. But the suburban fantasy gets grim quick when she hears young Eleanor’s voice from the playhouse in the backyard, meekly uttering “I’m not supposed to talk to strangers.” When Preston finally sees the little girl, she’s taken aback, but why? Whatever the reason, John Lucas is careful to lay some hints a few pages previous, as though trying to ease the blow.

Unfortunately, we’re too familiar with this kind of story, and obscuring Eleanor’s face with that rose forecasts some unspeakable tragedy. Y’know, the kind of tragedy that would even horrify a S.H.I.E.L.D. Agent who spent the better part of a year trapped in Deadpool’s body. I had previously feared that Eleanor would share her father’s… grotesque appearance, but Preston’s reaction leads me to believe that whatever’s going on is even more upsetting than that.

That is some heavy shit. Child abandonment and child endangerment aren’t exactly Deadpool‘s bread and butter, which is why the rest of the issue is so firmly grounded in vampire slaughter and cheesy jokes. I’ll admit that at first I was kinda bummed by the jokes in this issue — even allowing for the “so many jokes, one of them is bound to land for you” approach to comedy, there are an awful lot of crummy jokes here. But right when the vampires made the same “death of disco” joke that Deadpool made earlier in the issue, it becomes clear that this isn’t humor for the sake of joke writing, but humor for the sake of dealing with difficult subject matter elsewhere in the issue. It’s the spoonful of sugar — non-threatening, predictable sugar — that makes the bitter pill go down so much easier. I can’t think of a set of panels that better expresses the relationship between humor and violence in this issue than these from Dazzler’s first encounter with a vampire. 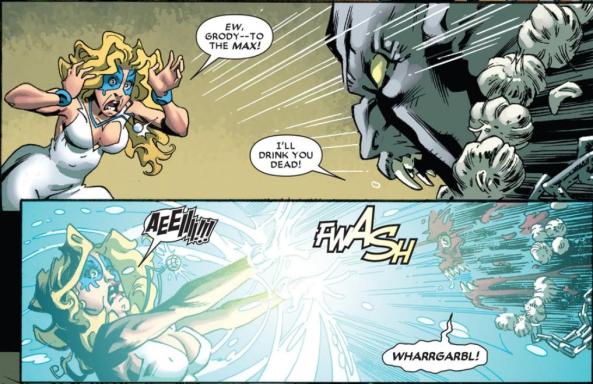 The joke, such as it is, is just Dazzler using outdated slang to downplay the horror of what she’s experiencing. It’s the third or fourth joke just like it (depending on what you count as a joke), and it’s far from the last. The surprise isn’t in the joke, but in Dazzler’s gruesomely effective powers.

Last time, we grumbled about John Lucas’ character designs — they’re just too lumpy and ugly, evoking Ren and Stimpy more than any superhero standard. I’m a pretty big advocate for art the eschews the Big Two house-styles, and I generally think the elastic characters are a decent fit for Deadpool, but I have to question Lucas’ instincts when it comes to women. Disco Dazzler’s boobs are out of control in this issue, and occasionally, her nipples are even articulated through her clothes. The same is true for Shiklah, which sorta undercuts the role these two very strong female characters play in this issue. In fact, with Preston in the mix, this issue might have more bad-ass ladies than anything else I’m reading this week, I just can’t understand why Lucas seems so hellbent on objectifying them.

Greg, I know you were trying to justify the artwork last time — does this second installment help you with that any? Also, what do you do when you feel a Dad Joke brewing? Suppress it or let it run free?

Greg: My dad once told me a long-winded, verbose, and completely insane joke that ends with changing key words of the song “This Old Man” to involve Kermit The Frog, Mick Jagger, and a poor phone salesman named Patti Black. It’s so relentlessly cheesy, so jaw-droppingly earnest and without shame, that it will forever be a part of me and any future kids I have. Basically my answer to your question is this: all Dad Jokes, every Dad Joke, into my brain, please.

I, however, wanted to explore the vampiric repeating of the “death of disco” joke you talked about, combined with your reading of the appeal of the Dad Joke as being “subversive by not being subversive” (in a sidebar, while we’re talking about Cheesy Things That Greg Will Always Love, disco will rule in my heart forever and ever). What’s important about the reprise of this joke is that, after it’s said, a full panel is given to the vampires laughing idiotically at their own joke.

This, to me, doesn’t jibe with the over-earnest appeal of Dad Jokes. Because we see these characters laughing aggressively at the joke, writers Brian Posehn and Gerry Duggan are effectively commenting on how cheesy they find it. Thus, the source of humor is generated not from the actual content of the joke, but the over-the-top reaction of the characters who say it. “Look at these dummies who think this is funny!” is the general gist of the punchline, and while this subversion of comedic constructs falls in line with the general dissecting-a-frog style of humor in Deadpool, it also allows the reader to become disengaged, to step back as a commentator rather than become enthralled as a participant. When you’re using humor to deal with emotional heavy lifting, as this issue is doing, this might not be the most effective choice.

In the wake of David S. Goyer’s miserably stupid and misogynistic comments on She Hulk (which I’m not gonna link to because, seriously, fuck David S. Goyer for saying that nonsense), I have found myself more than ever critical of the tendencies in comics specifically and pop culture as a whole to oversexualize female subjects — making them less independent characters of agency and more objects for men to ogle. In this particular issue, I do find myself growing fonder of Lucas’ ever-growingly grotesque collapsings of traditional human forms (your citation of Ren & Stimpy as an aesthetic antecedent is pretty much perfect), particularly as an extension of the ever-growingly grotesque collapsings of Deadpool’s world, and the effects of Original Sin. However, I also have to agree with you in wondering why Lucas, when every other part of the body is allowed free reign to be as wonky and distorted as possible, continues to give his female private parts the most detailed and lovingly rendered depictions imaginable. It reeks of sexism, of allowing the male gaze to triumph over a consistent artistic world, and I do hope that it’s toned down in the future.