Okay, that might be a slight exaggeration (Clue certainly gives it a run for its money), but the fact remains that, in a genre not exactly known for being a laugh riot, Original Sin stands out as something strange and unique (and hilarious). Despite the deadly secrets, overwhelming paranoia, and occasional gore, Jason Aaron and Mike Deodato somehow manage to give us an issue with a laugh on pretty much every page, an issue that treats its subject matter with the utmost seriousness but that also has no problem embracing the sheer ridiculousness inherent to the medium. It’s a difficult balance to achieve, but Aaron and Deodato walk that tightrope masterfully.

Original Sin 4 mainly concerns itself with the three teams recruited by the “mysterious boss.” After stumbling across the most unusual shooting victims ever, they become suspicious about just who actually recruited them. Doctor Strange and Punisher infiltrate Avengers Tower and kidnap the Orb; Black Panther, Emma Frost, and Ant-Man dig out of the Earth and shoot into space; both groups wind-up on an abandoned satellite with the Winter Soldier, fresh from murdering Nick Fury and still touting his severed head. Before he can explain himself, Gamora appears, out for Bucky’s blood, but she’s stopped in her tracks when Bucky reveals that the Nick Fury he murdered was a Life Model Decoy, the most sophisticated he’s ever seen. It’s at that point that the real Nick Fury appears — much older (but still looking pretty good for a WWII vet) and surrounded by L.M.D.’s — and reveals that he’s been their mysterious boss all along.

In our previous write-ups of this series we’ve devoted a fair amount of time to pondering the meaning behind the title Original Sin. One theory was that it represents the sins of comic books past, and that reading could certainly be applied to this twist, possibly condemning the Big Two’s constant cycle of deaths and resurrections (or death fake-outs), but my pet theory is that it has more to do with the connection so many Marvel characters have to WWII.

Hear me out. Characters like Captain America, Namor, Magneto and Nick Fury (not to mention all the JSA-ers over at DC) are inextricably linked to WWII, which has begun causing problems now that 70 years have passed and these characters are still around. Writers have to jump through hoops to come with up with excuses to keep these guys young, and while this new twist is quite possibly just another hoop-jump, it could just as easily be Aaron poking fun at how ridiculous it’s all become.

That said, Aaron embraces the inherent ridiculousness of comics so whole-heartedly that I certainly don’t think any commentary he’s making has any real malice behind it. Aaron’s obviously enjoying having full reign of the Marvel sandbox, and his inventive team-ups and pitch perfect dialogue serve to make this strange, grim tale unusually funny. 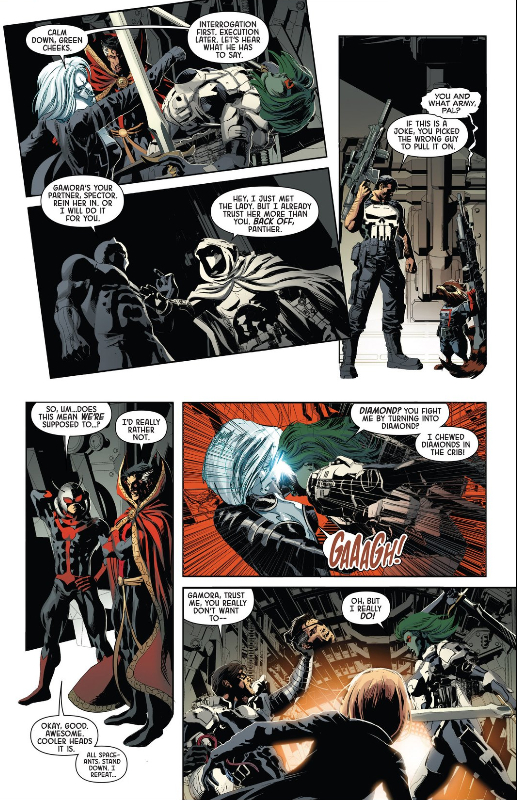 Just look at that gem of a page! I can’t even begin to pick a favorite moment. Is it Frank and Rocket’s tough-guy stare-off? Ant-Man and Doctor Strange’s anti-fight? Gamora’s entirely sincere cry of “I chewed diamonds in the crib!”? It’s comedic gold, but most importantly, it isn’t just wackiness for wackiness’ sake; every one of these gags feels true to the characters, and that goes a long way towards selling such absurd moments.

Still, Aaron balances this surreal absurdity with legitimate stakes. In the scene above the characters — still reeling from Uatu’s death and the strange victims they found — now have to deal with Bucky seemingly killing Nick Fury and the very real possibility that not a single soul on that satellite can be trusted. Despite the jokes these threats feel real and dangerous, and much of the credit for that goes to Deodato’s art.

We’ve talked a lot in recent reviews about how Deodato’s the perfect straight-man to Aaron, and his hyper-serious art continues to sell the crap out of the story, grounding anything Aaron throws out there in realism. Moreover, Deodato’s layouts help to reinforce the themes of paranoia and the lack of trust sprouting up among Fury’s bizarre little team. 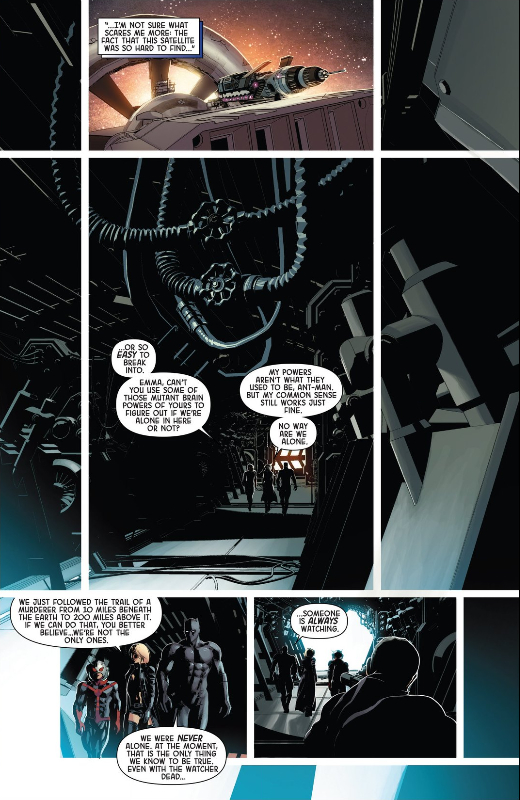 Throughout Original Sin Deodato’s gotten into the habit of splitting up some of his pages with seemingly arbitrary, pure white panel breaks. In the page above, these breaks are used to separate empty space from the part of the background that T’Challa and the others inhabit, and it creates the effect of the walls closing in, of the page itself shrinking in on the characters, confining them much as the secrets of this series are beginning to. Moreover, the way these panels are laid-out reminds me of a window, and, at least personally, it gives me the feeling that somebody is watching the proceedings. Of course, in this case the Punisher literally is watching, but that’s a moot point; all these are excellent examples of using layout to emphasize theme.

Those examples are also somewhat subtle, but there are other moments where Deodato and Aaron make it rather explicit, such as when the panel breaks literally come between two characters in an argument: 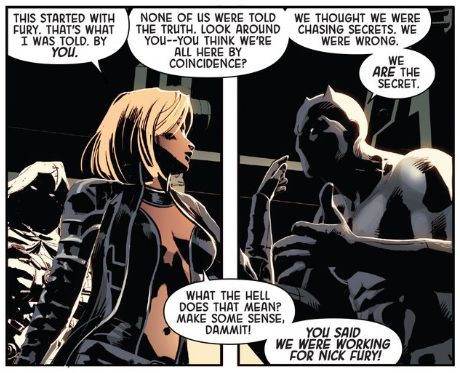 T’Challa and Emma are both inhabiting the same moment in time, having a conversation that both can obviously hear (because the balloons overlap both panels), but the break in panels here seems to represent the secrets and paranoia Uatu’s death has sparked literally creating a divide between them.

It’s clever, it’s ominous, but it’s also fun, and that’s Original Sin in a nutshell. This series is nothing like I expected it to be, and I still have no idea where this mystery is leading us, but if the ride continues to be this fun then I’ll follow it anywhere. Patrick, did you have as much fun with this issue as I did, or did Aaron and Deodato’s balancing act just trip you up?

Patrick: It’s pretty invigorating to see an event book like this firing on so many different cylinders at once. I love that page that Spencer posted with each pairing of superheroes deciding whether or not they really have to fight each other, but the whole damn story is filled with knowing nods to comic book tropes. I was genuinely surprised by the reveal at the end of this issue, but there’s no reason I should have been. LMDs are a totally common out for Marvel, and if you got back and read my write-up of the first issue, I was under the impression the “mysterious leader” was Nick Fury from the get-go. Somehow, that final page is exactly what I thought it was and a complete surprise at the same time. The only clue we really had in the previous issue that Fury was an LMD was the information that he didn’t get a flash of secrets when the Eye went off (because he is the secret), and the always-unacknowledged elephant in the room: his perpetual youth.

Spencer did a nice job of listing the heroes that share a problematic origin with World War II. That’s a fixed moment in time, but we like our comic book characters on a moveable timeline. So we collectively ignore it, or halfheartedly explain it from time to time. But mostly, we accept it, because we’ve been accepting it for so long. I’m reminded of the fifth season of LOST, which you better believe I’m going to spoil right now. The off-island stuff mostly deals with John Locke dying trying to recruit his friends into coming back to the island, and then Jack and Ben bringing everyone together in a way that Locke never could in life. Then they all wind up back on the island, with Locke’s body in tow. At this point, we are so ready to believe that John Locke is special, and that his connection to the island is so pure and powerful, that when we see the man up and walking around the island like he never died, it’s a moment of triumph — something we accept as true even though we know it’s absurd. The surprise comes at the end of the season when we see that the real John Locke is dead, and the only reason that’s surprising is because we willfully pushed that thought out of our minds. The same is true of Nick Fury; we’re only surprised to see him as an old man because we’ve decided to believe the lie that he’s still relatively young. It’s my favorite kind of surprise, one that subverts our ridiculous expectations with something much more grounded.

I’ve also become enamored with the way Deodato divides his pages into regular square panels at clean right angles. He’s got something of an anti-Bachalo thing going on, and every single layout feels orderly and squared off. Except for the pages and panels that don’t — but he’s always got a reason. I love the Hulk vs. Punisher fight, partially because I think Frank needed at win at this point in the series, but also because it’s the first time in the issue Deodato plays with his grid paneling. The very first askew panel is of Frank blasting Hulk out the side of Avengers Tower. It’s a fun, explosive moment, made all the more surprising by the evidently broken layout. 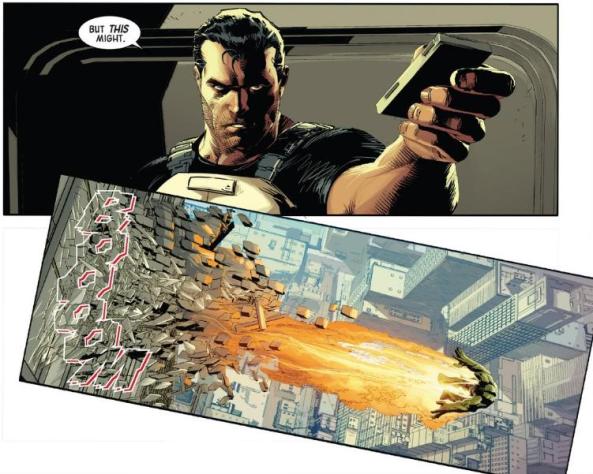 Deodato uses a similar effect two pages later when Hulk makes his way back into the building, only the border of the panel is much more jagged. In fact, Hulk’s not actually in that panel, just a large green “RRRRGGGGHHH!” and Frank’s concerns that the Hulk is immanent. It’s a smart way to telegraph the presence of a character without actually showing him. Deodato brings the exact same effect back when an unknown ship docks at Fury’s satellite. 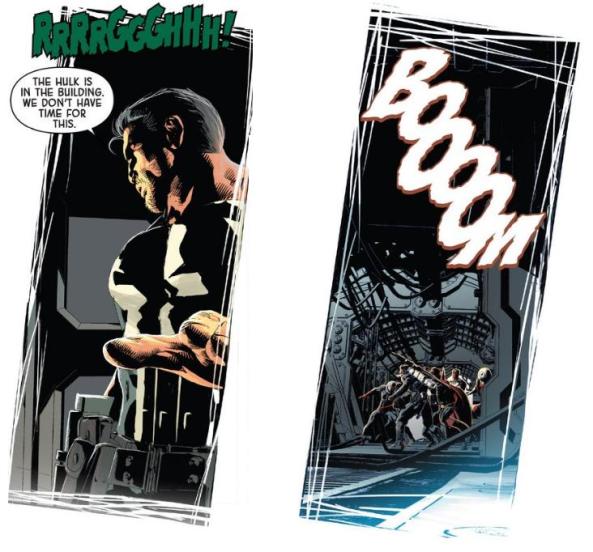 In both cases, it portends some immediate danger, but also goes a long way toward granting those sound effects a little extra heft. I don’t know how you guys are reading it, but that BOOOOM in the second example is the loudest sound effect I’ve read all week.

Oh, and just like you Spencer, I have absolutely no idea where this is all going. I like the idea that this group of mostly-anti-heroes is, in itself, Nick Fury’s secret. That makes their investigation — whatever that ends up being — so much more meaningful. If all the spin-offs were going to be digging into the ramifications of unveiling secret histories (Thor’s sister! Stark and Banner’s shared past!), then the lead title was slated to miss out on that very brand of fun by being a murder mystery. Well, the genre chains have been tossed off in this issue.