Shelby: It’s really hard to write about a new creative team on a title; how do you manage to discuss the book as a stand-alone piece without comparing it to the previous issues? It’s even harder when you liked the title before the change, because now you have to make sure you stay objective. If there are things I dislike about the new team, is it because I genuinely dislike it, or is it just because it’s different from how it used to be? I’m faced with this dilemma now as I consider the first issue of Thunderbolts without Charles Soule at the helm, and some of the decisions Ben Acker and Ben Blacker have made with this book definitely have me scratching my head.

The issue opens with a regular day on the job for team Thunderbolts; they’re out to stop a group of snipers from killing the Avengers. Like, for real: all the shooters had weapons specifically designed to kill each target. The Leader tracks the signal for the go order to a high school, where the team is horrified to find all the students dead. That’s when things get weird; the corpses reveal themselves to be actually zombies, and they make quick work of the team, the end.

Just kidding! The team is actually under the power of Doctor Faustus, a Cap villain who loves to get control of people’s minds and make them kill themselves. While it looks like everyone has succumbed to Faustus’ psycogenic gas, Deadpool has actually been faking it, since he decided the school smelled so terrible he was going to hold his breath. He saves the day, and then the team has to decide what to do with Faustus. Frank is all about shooting him in the face enough times to make sure it sticks; there’s a whole school of dead children on this man’s hands, and Frank thinks he needs to be Punished. Thaddeus, on the other hand, decides the team will “keep him” and force him to do good things until he’s made up for all the bad he’s done. This does not sit well with Frank, who quits the team. Apparently, though, the Thunderbolts have pretty strict guidelines about submitting your two weeks notice first: 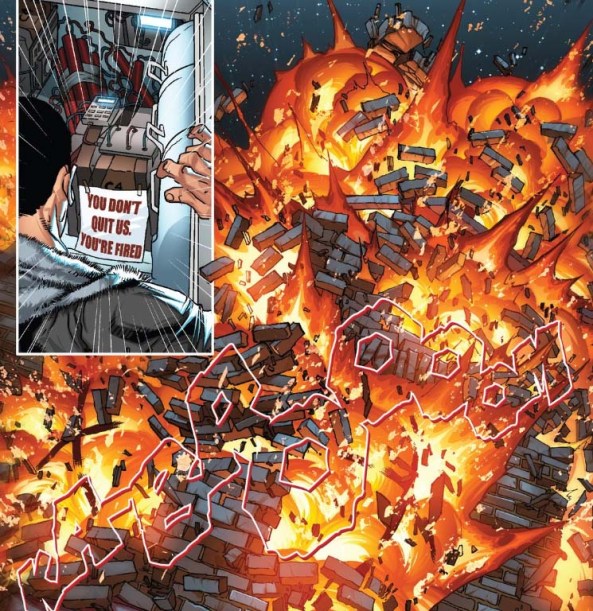 I…huh. I don’t really know what to make of this issue. It’s the main argument between Frank and Thaddeus that has me most bewildered. On the one hand, I’m glad to see Thaddeus isn’t willing to act as judge, jury, and (mostly) executioner in regards to the perps they pick up. No matter how obvious it is that Faust deserves to have the book thrown at him, Thaddeus seems to be aware that more killing isn’t going to make solve any problems. He’s thinking long game, and knows that the violence needs to stop somewhere if he’s going to make any improvements to the world.

Except that’s obviously not the case, because earlier in the issue we saw Red Hulk crush a sniper’s head in his bare hands. Really, I was wrong earlier, he absolutely has taken it upon himself to act as judge, jury, and executioner. Ross is determining who is bad enough and useless enough to die. If you’re bad but useful for the team, you get a pass. Honestly, I don’t know if that’s more or less concerning than Frank’s blanket policy of “bullet in brain” for all perps. What makes Ross think he can assume that sort of authority? It would certainly explain the bomb in Frank’s beer fridge if that is the case; Frank went from “bad, but useful” to just plain “bad,” so by Red Hulk’s Sliding Rule of Stay-Aliveness (TM), he’s gotta go. This is, of course, assuming the bomb was actually put there by Ross, and not that we’re just meant to think it was. The thing is, I can’t tell quite yet if Ross’ self-appointed authority is compelling character development on the part of Acker and Blacker, or if it’s just contradictory. I think this is going to have to be one of those “time will tell” situations.

Drew, what do you think about this new chapter in Thunderbolts? Are you as excited about Acker and Blacker’s take on the team as you were for Soule’s? Do you think it’s interesting that Frank Castle’s darkest fears are becoming a mindless, out of control killing machine and killing Elektra? Did  you know Deadpool was that good at holding his breath?

Drew: Well, I imagine being virtually immortal is pretty helpful when it comes to holding your breath indefinitely. Like, was he actually holding his breath, or just suffocating to death and being revived a bunch of times until Faustus showed up? My bet is that it’s way more complicated than “I ain’t breathed a breath since I walked in”, but leave it to Wade to gloss over what sounds like a painful, morbid process with a simple joke.

Which is to say, I actually think Acker and Blacker have a fantastic handle on these characters’ voices. Or, at least the characters they featured more heavily here. Deadpool gets a lot of good lines (actually, taking a page from his solo series, he might have too many jokes), and I think the conflict between Red Hulk and Punisher effectively distills their characters down to their essence.

Punisher tends to see things in black and white — bad guy dies, good guy lives — but Ross is a much more strategic thinker, which kind of forces him into questionable grey areas. Ultimately, a life of imprisoned servitude may be much, much darker than Frank’s preferred solution, but Frank seems to think that would be letting Faustus off too easily. After all, it’s not like Red Leader is chained up in Ross’s basement right now — he’s far from free, but his punishment is definitely pretty lenient for a murderer.

Shelby, I see what you’re saying about inconsistencies, but I think they make more sense than you’re letting on. Whether he kills the bad guys or not, Ross is definitely acting as the judge and jury. Like, he might kill goons he sees as useless, but he might sentence another one to life in prison if he thinks he’s useful. His objection to killing was never that he didn’t have the authority — as far as Ross is concerned, he has every authority — he just thought the more strategic move here was to keep Faustus alive.

Actually, I’m more bothered by the inconsistencies of Frank’s attitude. That Punisher punishes seems straightforward enough, but he’s not always about the quickest possible route to killing his victims. He might capture a goon to pump him for information. Sure, that interrogation invariably ends with the goon in a body bag, but it seems like Frank should be able to swallow the idea of keeping someone who might be useful alive. It’s not like Ross said they couldn’t kill Faust eventually. Ultimately, I still believe Frank would rage quit after not being allowed to kill a bad guy, even if I think Ross could have made some more convincing arguments.

Again, I thought Acker and Blacker handled this issue beautifully — honestly, if I wasn’t so aware that Soule had left, I might not have noticed a difference — but I think the real test is going to be how they handle Red Leader, Ghost Rider, and Elektra, who get pretty minimal page-time here. Deadpool, Punisher, and Red Leader have some of the clearer voices on the team, so it may be easier to get inside their heads — I personally think the real challenge is going to be Elektra.

Ultimately, the piece of this issue that stuck out the most in my head was the fake-out team death, a concept already well mined by Soule’s run. I suppose three iterations makes this a pattern, but I’m not sure how effective it is. I was totally ready for this issue to solve a zombie Red Hulk, but as soon as Ross bit Punisher’s hand off, I knew we must be getting another fake-out. It’s a pattern that effectively deflates tension, devolving into a predictable series of meaningless deaths. Or maybe it’s funny to see how ridiculous the writers can make those deaths? I don’t know, what does everybody think: is it funny to treat the Thunderbolts like Kenny, or does this pattern prevent you from investing in what actually happens in these stories.