Patrick: If there’s one thing all high concept stories suffer from, it’s a strained Third Act. So much of our fun up to that point has revolved around realizing a unique, compelling world. When it comes right down to executing on all of the promises laid out in the previous chapters, thematic beats have to take a backseat to action beats. Even when a sci-fi story finds a way to make that final moment a clever twist that asks questions which reinforce the central theme (like in Looper or The Matrix or Blade Runner), the meat of the Third Act is frequently less about the important ideas in action and just settles on being “in action.” When that action is executed with the grace and style of Private Eye‘s creative team, well, maybe that ain’t such a bad thing.

As a consequence, we don’t spend a lot of time dwelling on what it might mean to restore the internet, even if Nebular thinks they can do it tonight. We also don’t get any surprise personal revelations about P.I.’s character, like we did in issue 5. In fact, with the exception of the flashback which opens the issue, the business here is action-action-action. All good action sequences need a MacGuffin of some kind, and Private Eye‘s is, rather hilariously, an iPad. Anyone that’s every written anything about this series (including Vaughan himself in the letter’s section) likes to point out the strange relationship between a story about a world without the internet and Panel Syndicate’s method of distribution. This “get the thing” sequence goes one step further, making the ideal vehicle for digital comics the “thing” in question. Better yet, P.I. can’t even dignify the iPad with its name, instead calling it an “oversized phone” or “old slab thing.” By making P.I. unfamiliar with what exactly to call it, the iPad becomes the prototypical “prize,” and the ambiguity of how it can be used to help our heroes actually benefits the storytelling. It could be the holy fucking grail for all we know.

That means P.I. and Raveena have to get the iPad out of there first. Rather than risking a shoot-out at Nebular’s home / shipping container, Raveena and P.I. pull a little rope-a-dope decoy with Nebular’s sexy doll. In the ensuing confusion, they make off on hover-cycle, and the series goes into full-on chase mode. Marcos Martin steers the action onto a long-abandoned and decrepit stretch of Freeway (I’m guessing that’s the 10 that’s all fucked up, but part of me is hoping it’s the 405). The chase itself is invigorating, but strangely empty of other cars and drivers — we don’t know quite enough about this future to know what happened to the freeway system, but these streets are basically never empty now. Whether or not the streets are literally empty is immaterial, we match up our expectations against what we see on the page, and two-on-two nature of this conflict is thrown into stark relief. There’s nothing else that matters: just those four people and this one thing.

It’s impossibly cool. I love this moment that seems ripped out of samurai showdowns in old Japanese cinema. 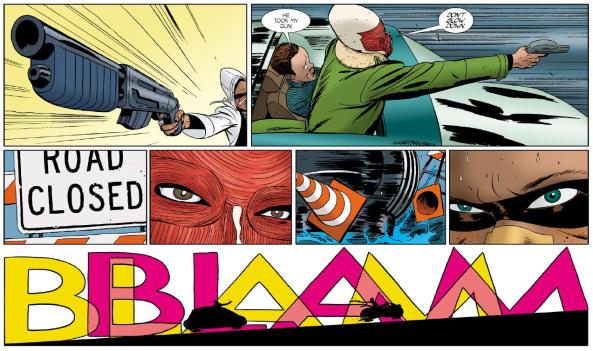 First row establishes the weapons, second row establishes the characters (by their distinctive eyes) and the final row is all action. Literally, the sound effects takes up most of the panel real estate. If this issue is all about executing one big action beat, then this page is all of that in miniature.

After all of that, we’re rewarded with a cameo from my favorite character: P.I.’s grandpa. I look at this character as something of an audience surrogate. Living with the internet as we all do, he explicitly represents what everyone else in this world represents implicitly — whatever resources are available, the services provided by the internet are amazing, and we’ve all grown used to the convenience and anonymity those services allow. He can probably get the iPad working again, but the serves the dual purpose of reminding us that the bad guys might actually be on the verge of doing something very good. When he starts in on the problem with having to use the phone to order delivery from Sugarfish, we don’t even need the end of his sentence to know what sucks about that. Hey Gramps, I hate talking to people too. Martin and Vaughan have been depicted the character as something of a rattled ADHD digital media junkie, and it’s nice to see him fleshed out a little bit, even sprightly expressing a little agency. 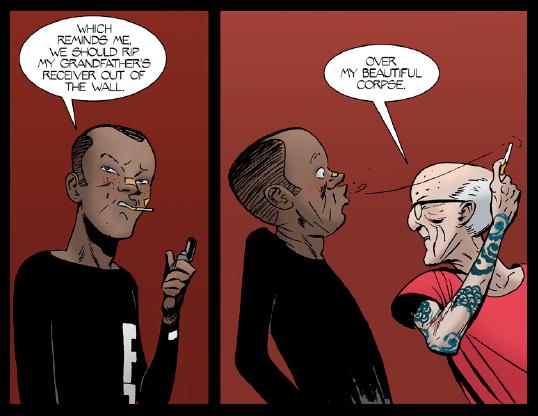 I mostly focused on what’s fun in this issue, which leaves Richie with the responsibility of discussing the darker turns the story takes with Melanie. Richie’s one of the funniest guys I know, so I feel like I’ve totally set him up for success here! Richie, are you digging story as it enters its end-game? Do you get a cheap little thrill from seeing the Dome at the Arclight and Amoeba Records in a comic book too, or is that just me?

Richie: You’re not the only one, Patrick. If my geography is correct, Gorilla Mask and his mistress are making out in the parking lot of the most disgusting Jack in the Box that has ever been created. Even after the cloud bursts, we’re going to need somewhere to eat if we want to instantly feel sick. Speaking of feeling sick, let’s talk about poor, poor Melanie. 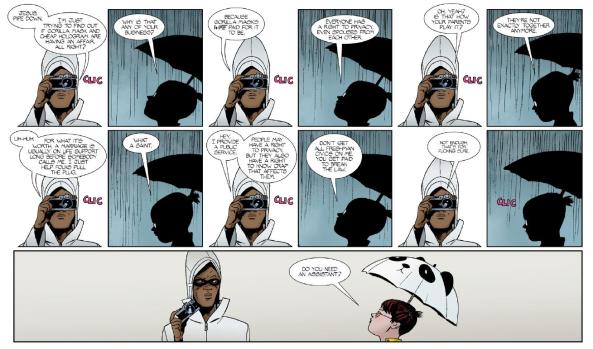 I love this page. Everything we need to know about what has, so far, been a supporting player is here. Young girl, parents went through a rough divorce when she was just old enough for it to fully hurt, developed a wariness of the world and a sharp sense of humor. Done. One fully fleshed character, open for business. P.I.’s panels are clear on a white background while Melanie is left in the dark until, with the camera’s “clic” slipping into her panels to signal inspiration, she invites herself into P.I.’s world. Also, my ex-girlfriend had that exact same panda umbrella, so take from that what you will.

She’s clearly smart, capable, and so ready to be old enough to get out and make her mark on the world, which makes it even more brutal when another of her “signature looks” blurs back to the present and the reality of her injuries. Near the end of the issue, Melanie is strong to the last possible moment — she has watched this guy kill at least three people and she’s still calling him “Frenchie” — but she’s backed into a corner. Melanie’s final two panels in this issue are heartbreaking. A side view as she finally accepts that she is going to sacrifice either her family or P.I., one closed and battered eye showing, though you can tell the other must be shut tightly as well, followed by one last look at the girl she used to be. Brian K. Vaughan is a bad, bad man.

On the subject of bad men (I am SO GOOD at segues), is it wrong that I’m pretty firmly on DeGuerre’s side at this point? Okay, he’s a murderer. Fine, his two French associates are terrifyingly distant and cruel. Right, I get all that, but he still feels to me like a man who is truly trying to do good for the world. 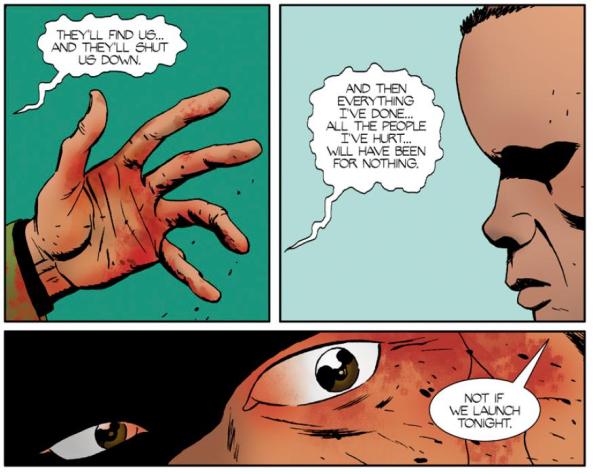 DeGuerre is horrifically injured, but he’s more worried that all of the sacrifices he has made (or forced upon others) will have been meaningless. Earlier, outside Nebular’s little box house (which looks to me like it has a winky face, but that’s beside the point), DeGuerre snaps when it looks like Nebular set him up. When Nebular denies it, DeGuerre apologizes to his henchman and seems to mean it! It all smacks of a man who has the means to do some serious good and is willing to make himself into the villain if that’s what it takes.

I don’t know about you, but I’d like to see what happens to this world if DeGuerre pulls it off. Would bringing the internet back make this world any worse than it already is? Is DeGuerre really the villain P.I. sees him as? Does Jack in the Box still have 99 cent tacos in the future? I want at least two of those answered!

Richie Root is an improviser and actor. You can often find him performing at the Upright Citizens Brigade Theatre. @richierooooot on twitter.