Greg: At my high school, marching band was a huge deal. It had all the emotions, pressures, and big personalities of a championship football team.  I played in the pit upfront (marimbas, vibraphones, xylophones) my entire high school career. My freshman year was the long-running, much-loved band director’s swan song — he also happened to be my dad, which definitely didn’t help with the pressure thing. We won state championships for the first time that year, meaning my sophomore year definitely didn’t help with the pressure thing. Certain instructors and students started treating it like a military outfit, and it was too much for me. I took to my LiveJournal and posted an obscenities-and-hormones fueled diatribe on the people who I felt were taking it too far. My parents immediately found out. My dad, no longer the band director but now the assistant principal, ordered me to face the new band director in a one-on-one. I went in expecting to be eviscerated, but was surprised to find the director met me with patience, understanding, and forgiveness. I was primed and ready for battle, but instead had a deep, insightful, mutually respectful conversation. This sense of narrative rise-and-hard-left-turn happens in Trees 3 as well, and left me feeling similarly satisfied.

Eligia is a woman fed up. Fed up with being used by her “not-boyfriend” Tito, fed up with the empty threats and blind recitations of gang lapdog Davide, fed up with getting knives pulled on her by older gentlemen. So, she decides to actively solve one of those problems, following this Professor Luca Bongiorno (whom I wrongly guessed may have been future Marsh in the previous issue), a man who seems relaxed, composed, and quite cosmopolitan; when he humblebrags to his friend that his French is rusty, the friend doesn’t believe him, and I agree. Eligia continues to follow Professor Bongiorno to a dilapidated looking shack, only to find that he’s been aware the entire time. He pulls a gun on her, but instead of fighting, the two conversate. Eligia reveals her real intentions in following him — she wants him to teach her, to borrow parlance from Liam Neeson, a particular set of skills. Perhaps Professor Bongiorno will help Eligia with her other two problems.

This conversation is a brilliant sorta-anti-climax — while violence never erupts despite the rising tension spurred by weapons, what they talk about is rich, invigorating, and satisfying in a way that is perhaps more nourishing than any bloodshed. Professor Bongiorno uproots our previous assumptions about him by being clever and interesting, yes, but also blunt and forthcoming in a way that counters any notions of stuffy eruditeness or false intellectualism. Any sexual tension in the room is zapped away by this monologue, both psychoanalytic yet grounded in reality.

It reminds me of the Louis CK bit about men responding to women’s intellectual and emotional superiority by simply hitting them, guaranteeing that they’re at the forefront of society based on shitty reasons. Professor Bongiorno’s suggestion that romantic relationships between older men and younger women stem from guilt and protective instincts, yet his offer to teach Eligia can’t be pinned down that resolutely. “I am not your rescue project,” barks Eligia, and I believe that Professor Bongiorno believes her.

In this same scene, however, Warren Ellis’ tendencies to overwrite and show-off get a little bit in the way. Professor Bongiorno inadvertently humblebragged in a previous scene, yes, but I believe the key word is inadvertent; I believe he honestly believes he’s not as good with languages as he should be. His response to Eligia’s assertion that she won’t fuck him, however, is a straight up authorial “Look at how clever and funny I am!” boast. The small joke is bloated with digressions and overwritten “style”. It sacrifices authenticity, takes me out of the sparse, understated world of Trees, and feels less like an organic extension of the character and more like an inorganic flex of the author. Take a look at the exchange below and see if I’m making mountains out of molehills, but I believe Ellis needs to check himself a little better in the future.

What did you think, Spencer? I could’ve easily spent this entire essay going on and on about how much I love Jason Howard’s beautiful artwork, with its not-quite-fully-shaded-all-the-way pencils and consistently striking color palettes. Did it speak to you in the same way? I also didn’t touch on the brief interlude between the shy Chenglei and outgoing Zhen — how do you think that fits into this overall world?

Spencer: I’m actually having a bit of a hard time figuring out how any of this issue fits into the overall world of Trees. The series thus far has seemed to revolve around the ramifications of the trees’ presence on Earth — of the “silent pressure” their existence creates — but this issue is essentially devoid of the trees altogether; they briefly appear in the background of two panels and aren’t mentioned in the dialogue at all. I suppose some of that silent pressure still exists — both the city that has Chenglei so scared and the city that spawned Tito’s “movement” are products of a world forever changed by the trees — but these stories as presented in this issue are universal enough that they could take place in our world with only the most minimal of changes. I’m not necessarily saying it’s bad that the trees are such a minor presence in this issue, as I’m sure it’s an accurate representation of a world where the trees can’t be on everybody’s mind at every waking moment, but it does throw me a bit of a curveball in terms of trying to dig into this issue.

I do enjoy Chenglei’s plot, though. The poor kid hasn’t left his apartment since his traumatic introduction to the city in issue one, but Zhen puts an end to this, not by being intimidating, but by appealing to Chenglei’s pride and duty as an artist:

Chenglei traveled to the city with a goal in mind, and Zhen reminds him that he can’t let fear stop him from accomplishing that goal. If this interlude has any ramifications on the overall plot and world of Trees, I think they lie in that message, in the idea that Chenglei can only confront and survive a frightening and radically changed world if he faces it head-on with integrity and purpose; it’s a lesson that I imagine will end up applying to much of the disparate, scattered cast of this title, including Eligia.

To touch on your points about Eligia’s plot, Greg, I’ll start out by saying that I’m always hesitant to accuse authors of overwriting or showing off — I’m usually quicker to blame myself for not understanding something — but I will admit that Bongiorno’s response Greg included in his second image does feel a little clunky. I’m actually more frustrated with Bongiorno’s monologue about why older men like young girls. Again, I’m not going to blame Ellis — just because a character believes something doesn’t necessarily mean the author does, and it’s even possible we’re supposed to disagree with Bongiorno — but his explanation just doesn’t jive with me. The world I see — both in real life and in the fictional universe of Trees — doesn’t have that many enlightened, self-aware men. As far as I’m concerned, older men like younger women because they make them feel young, and because they’re young and pretty and exciting and not at all like the wives that grew old and boring with them. While I’m sure there are some men who might realize what they’ve done to women as they get older — and who would also still have the arrogance to think they could help protect the next generation by sleeping with them — the rampant misogyny and overwhelming rape-culture that permeates our world all but guarantees that those kind of men are the minority.

Part of me thinks Bongiorno doesn’t know what he’s talking about, part of me thinks he’s just making things up as he goes, but most likely he’s simply thinking only of himself and his own experience instead of men as a whole. When Eligia insists that she won’t be his rescue project, the look on Bongiorno’s face is too cagey for my tastes: 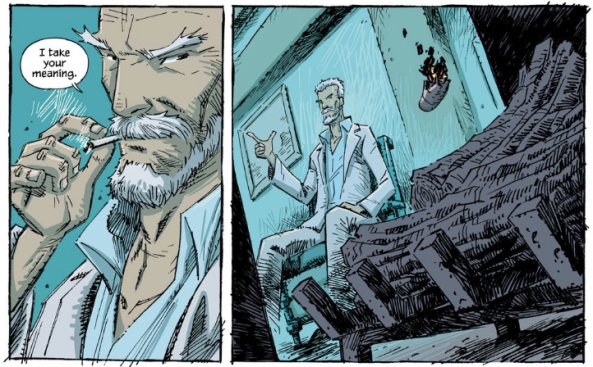 Maybe he doesn’t think of Eligia as a rescue project, but he’s obviously got something planned for her beyond simply teaching her to protect herself; the facial expression Jason Howard gives him is just too devious, and the way he ends that scene (and the issue) with Bongiorno tossing the cigarette into the fire is ridiculously ominous, as if this is the action that’s going to spark a fire, and fires can quite often grow out of control.

Beyond these few panels, though, there’s still just something suspicious about Bongiorno. Why does he know how to disappear like Batman? The sweet, humble professor we see at the beginning of the issue in the book shop seems like an entirely different person from the blunt, competent, whip-smart man who confronts Eligia. Which one is the act? There’s a lot more to this guy than meets the eye.

Anyway, if I have any complaints about Howard’s art, it’s that his women look too similar — Eligia and Zhen have nearly identical builds and faces, although their personalties and moods couldn’t be more different — but other than that I’m quite happy with his work, especially when it comes to the backgrounds and coloring. Howard doesn’t go into detail when it comes to shading his backgrounds, instead bathing each location in a different hue, be it the yellow city, Chenglei’s red apartment, or Bongiorno’s icy blue home. This technique makes each location feel different both in look and tone, but it also helps the characters stand out more, as they’ll often be the only non-monochromatic element on the page. In a book that spends so much time hopping between different locations and casts of characters, making each location feel distinct can be vital, and Howard absolutely pulls it off. He may just be the glue that will keep this ensemble book feeling coherent even as the story twists, turns, and expands its scope in every direction. Even if the story doesn’t feel like what’s come in previous issues, Howard’s work still makes it feel quintessentially Trees (whatever that means).