Spencer: My best friend is an artist, and he constantly complains that I read my comics too fast, that I don’t pay enough attention to the art. I’ll admit it, he has a point; I’m so eager to read the story that I often devour my comics, and miss things in the art I don’t catch until my second or third time through a book. There was no way I could do that with Matt Fraction and David Aja’s Hawkeye 19, though. This issue demands that you slow down and pay attention to every detail. It’s a challenging read in many ways, but it’s a challenge that’s absolutely worth attempting.

Although the Barton brothers survived Kazi’s attack at the end of issue 15, it left Barney crippled and Clint deaf (much as he apparently was in his childhood). Clint’s not taking it well, retreating into his shell (his usual coping technique) and refusing to talk or sign with anybody. It takes a fistfight with this brother Barney before Clint wises up. Clint enlists the help of his tenants and even some Avengers in his war against the Tracksuits, but not before taking down an entire Tracksuit hideout!

So like I said, this is a challenging issue, as the majority of the story is devoid of dialogue; told from Clint’s point of view, we only get blank speech balloons, sign language, and garbled lip reading (major kudos to Aja and Chris Eliopoulos on the lettering for that). Its up to the reader to do the work, but fortunately, Aja’s pencils are so expressive that we can often get the gist of the conversation from the images alone. 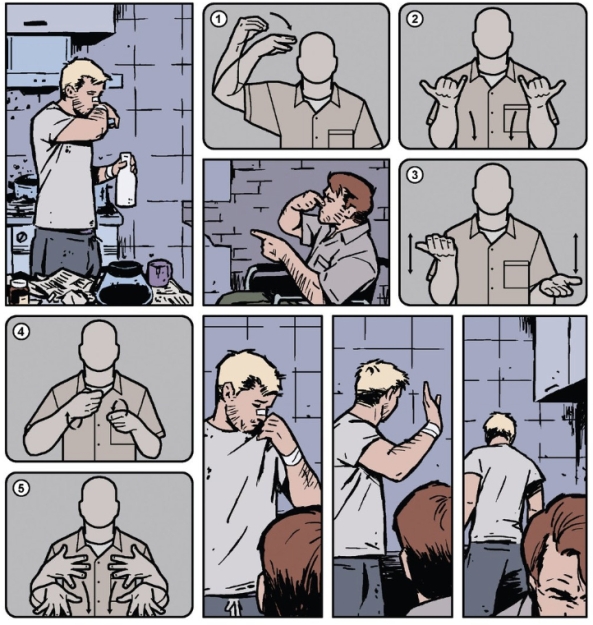 On this page, for example, I can’t read the sign language, but Aja makes it clear through the body language of the two characters that Clint smells, and Barney’s lecturing him about how he hasn’t been taking care of himself — an obvious sign of the downward spiral the Tracksuits’ attack has knocked him into.

This is certainly a familiar technique for Hawkeye; from the very beginning, this series has been showing us how Clint views the world around him (remember his take on people speaking foreign languages?), and it even treated us to an issue from the dog’s point of view. What feels different in this particular issue, though, is the weightiness of the whole situation; not only is the story heavier, but this new perspective is the result of a character being shot and deafened, and Fraction and Aja treat Clint’s new reality with gravity and respect.

I’m probably cheating a bit by bringing the creator’s word into this essay, but this tweet from artist David Aja hit me really hard. Reading this issue was an enjoyable challenge, but I can’t imagine living this way every day; by creating this issue, Fraction and Aja have given readers a chance to spend a day in the shoes of a deaf person, to get at least some tiny sense of what it’s like to live with a disability, and it’s absolutely eye-opening.

Fortunately, Fraction picked a worthy tale to tell in this special issue, taking Clint to his lowest point but also allowing him to find the strength to pick himself back up; Clint finds strength in his friends, in the tenants of his building he’s been fighting so hard to protect. This outcome was foreshadowed back in issue 17, when Clint’s “Winter Friends” counterpart, Steve the Dog, wanted to do everything on his own but eventually saved the day via teamwork. Steve and Clint share the same weakness — they have too much pride to ask for help (as Barney points out) — but it appears that Clint has finally managed to push that pride aside.

Of course, it takes a lot more than a holiday cartoon for Clint to reach that realization — in fact, it takes a scuffle with his older brother, just like the kind they had as kids.

Aja makes the parallel quite explicit, and I appreciate that, as it perfectly illustrates how hard it can be to change bad habits. We all want to think we can change, but more often than not, we end up spending much of our lives repeating old mistakes, stuck in the same old routines because it’s just easier. And that’s Clint all over. In this vein, I get the impression that, like many siblings, Barney and Clint have been having this same fight over and over their entire lives; likewise, Clint is still using the same coping mechanisms he’s been using since he was a child, and it takes a few good hits from Barney for Clint to realize that he has to change how he handles tragedy if he’s ever going to move forward in life.

The flashbacks to Clint’s childhood do a lot to show how Clint got stuck in these ruts; I imagine part of the source of his “pride” and hesitance to sign was not wanting to look weak in front of his abusive father, and that’s the kind of impression that takes a while to fade away. As kids, Barney tells Clint to fight back, but Clint seems to sign that his father is too big and strong to fight (or at least that’s what the context implies), so Barney tells him to outlast their father instead, and as impulsive and quick-to-fight as Clint is, I have to wonder if Clint’s been handling the Tracksuit situation with the same strategy. Did he think that if he just stayed in the building long enough they’d go away? If so, I think it’s safe to say that he’s done playing things that way.

Man, I could spend all night digging into this issue; between the deep, realistic story, gorgeous art, and innovative use of layouts and sign language to portray Clint’s disability, this is truly an impressive issue. What do you think, Jack: was this worth the four-month wait? And just how adorable are young Barney and Clint anyway?

So adorable that it makes it harder to watch them as battered, broken young men, but the continuity is impossible to miss. They were scrappy, stubborn boys, and they have become scrappy, stubborn men with the kind of enchanting, boyish innocence that results in both telling bedtime stories to the neighbor’s kids and drinking milk directly from the carton. We’ve seen Clint in pretty bad straits for the last several issues, displaying the kind of despondency that tempts even his closest friends to give up on him. It was about time to see him bounce back a little. Asking for help is basically Clint’s weakest skill set, but if we are to believe that his injury will be a lasting one (will it?), he’s got no choice but to learn.

The note on disability is an interesting one. In general, Hawkeye does an excellent job of showing genuine inclusiveness where other artists would be reduced to mere tokenism. Its characters tend to cut through barriers of gender, race, class, orientation, age, and ethnic identity like a hot knife through butter – or maybe more accurately, like New Yorkers. But this issue ups the ante:  not only is our beloved, indefatigable hero (and his indefatigable brother) suddenly afflicted with a serious disability, we must experience it ourselves as readers. We get a brief but powerful sense of Clint’s frustration and isolation as well as the well of fortitude which he has no choice but to find.

Clint has been reaching for rock-bottom for a long time now, but it looks like he’s finally reached it. We’ve examined Grills’ death and its fallout from enough angles now. We’ve watched our shining superhero devalue and degrade himself with a steady stream of “I can’t”s and delinquent showers and night after night of drinking alone. To be honest, I kind of forget what his face looks like without a broken nose. But not for nothing is he an Avenger. There’s something really cathartic about watching him come out swinging from the pit of despair. All at once, he is able to admit his new baggage, come clean with his tenants about the dangers they face, restore their faith in him, and enlist their help to fight the tracksuit mafia.

At the risk of unbearable cliché, one of the more pernicious failings common to people as fundamentally good as Clint Barton is a refusal to share the burden. Even an Avenger cannot do it all, and the mission suffers if you pretend that you can. Clint has a history of risking his life for total strangers, taking responsibility for problems too big for him to fit his arms around, and neglecting to so much as clear his throat when he’s drowning. For the most part, he only ever receives any kind of assistance when a third party recognizes his impending failure and aggressively intercedes to pull him back from the brink of disaster. That’s why this part is my favorite, and yes, Spencer, it’s totally worth the wait: