What’s in a name? that which we call a rose
By any other name would smell as sweet

Drew: I kind of resent that works of art need titles. I appreciate the necessity of distinguishing one book from another, but titles seem to always inelegantly summarize or gracelessly fix some piece of authorial intent I’d rather not be privy to. I’m the least offended by more utilitarian titles, (coincidentally) like Romeo and Juliet, which doesn’t assert anything beyond the play’s focus on those two characters. With Trees, writer Warren Ellis certainly captured that utilitarian spirit by simply naming the thing that makes his science fictional world unique, but then he goes and re-muddies the waters by ending each issue with a pull quote. He removes them from any context, stripping them of any attribution or even punctuation — as if to hint at some kind of greater truth in his characters’ words — but that repetition alone is enough to lend those words an unwieldy significance that asserts someone’s subjectivity. As issue 5 takes an even closer over-the-shoulder view of many of the characters, the nature of that subjectivity becomes a central concern.

The pull quote in question — “it’s not permanent” — refers to the President of the Somali Federation’s strategy of setting weapons on top of the Puntland Tree. In context, the quote seems to be about the curious low-friction surface of the trees, but as a comment on the issue as a whole, it seems to refer to the seeming inert state of the trees, or maybe the tree’s opinion of humanity. Either way, I think this particular sentiment seems poised to upset the quote that appeared at the end of the first issue — that “all of this is normal”. The quote works to suggest that, having thoroughly established what life looks like in the shadow of the trees, we’re about to get some kind of inciting action that will set the story itself in motion.

Unless, of course, the title isn’t as straightforward as I assumed. There’s no doubt that Ellis’ approach to the trees has been through the perspectives of his characters — how they think about the trees, how the trees have deformed the world around them — but it’s not out of the question that that’s all this series will be. That’s a prospect that might be disappointing if I wasn’t already attached to some of these characters.

The first-person narration written in hand-written font directly onto the images makes it clear that this is Chenglei’s take on what’s going on, though we’re curiously privy to the knowledge that countless tanks and Humvees are currently speeding towards Shu. Maybe this has something to do with what President Rahim is currently pulling in Puntland? We don’t get any more information before cutting to Cefalu to catch up with Eligia and the Professor.

The Professor explains that his hideout is actually the Abbey of Thelema, and gives a brief history lesson that, as far as I can tell, isn’t embellished at all. The abbey is popular among mystics and witchcraft societies, but the Professor suggests that he’s only there because “it’s quiet.” But he also expresses interest in Eligia’s “fascist boyfriend”, Tito, who it seems may be tied into the mysticism at the Abbey as well. Tito’s gang is called Great Work, which in turn received some inspiration from Golden Dawn, both of which are mystical terms, and Great Work pertains directly to the practices at the Abbey. I’m not sure if the connection is necessarily that explicit — perhaps Ellis was just getting clever after all of his research — but the story of how Crowley treated women certainly parallels how Eligia has been treated by Tito.

Meanwhile, things are going full-on horror movie in Svalbard. The RF interference caused by the “poppies” has gotten to critical levels, shutting down power, and giving off some kind of freaky light show. 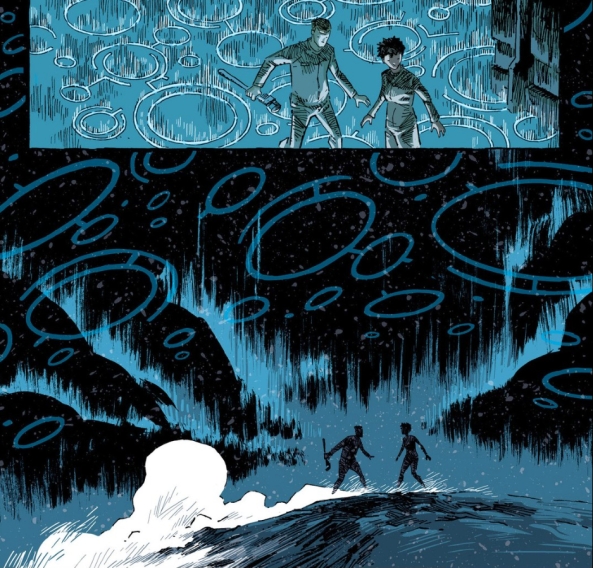 Immediately following this, Jo has some kind of freaky hallucination about a “crying sound” that we get to see, even though Adamski apparently doesn’t. We’re taking her perspective, however briefly, in order to see that whatever just happened has effected her brain. Jo and Adamski eventually find Marsh catatonic and covered in black flowers. Allinson promptly orders the burning of the flowers, but our perspective shifts again to see the burning cinders of the flowers falling back onto the tree that apparently birthed them. That’s when Ellis drops that pull quote about things not being permanent, which puts me at the edge of my seat about some kind of reaction from the trees.

I suppose I don’t yet have any conclusions about the shifting perspective this series continues to employ, nor how any of this suggests whose subjectivity is reflected in those pull quotes, but this series sure seems designed to keep me thinking about it. Ryan, were you as drawn to these questions as I was, or do you think I might be barking up the wrong…shoot. No pun intended.

Ryan: I am re-leafed to see Drew take the high ground and avoid any puns, proving yet again how he is not acorny person. That being said, I appreciate how strongly he feels about a work of art allowing the reader’s objectivity. Drew wants to come to his own conclusions without Ellis holding his hand or forcing conclusions. But what if we simply think of these pull quotes as nothing more than chapter titles which happen to come after the text? Writers use chapter quotes for plenty of reasons: to break their stories into sections, to add clarity or another layer to an unfolding plot, or simply to whet the appetite of the reader and keep them from using the book as nothing more than a doorstop. So, are these pull quotes anything more than that? Are they the subjective points of an overarching narrator relegated to speaking in regurgitated quotes only three to five syllables long, or an omniscient character we have yet to meet? I contend that, until the comic tells us differently, these pull quotes do nothing more than direct us towards some central themes seen in the title.

But we are watching the bark and missing both the forest and the…welp, did it again. Drew touched upon what I find to be the heart of Trees when he mentioned Chenglei’s “journey of self-discovery”. Ellis constructed a world and characters all undergoing identity crises, which is what Ellis does best. From his seminal run with Spider Jerusalem in Transmetropolitan to his reinvention of the Thunderbolts, we see protagonists defined and redefined as the true driving force of his plots. Transmetropolitan, throughout the infancy of the series, was a collection of one-offs wherein the plot plays second fiddle to seeing Spider’s acerbic personality deal with situations and wait to see what could possibly crack his dense shell of disillusionment. The missions and intrigue in the Thunderbolts took the back seat to whether or not any of these rogues could find heroic redemption. The same can be said for Trees.

In the world of Trees, very little has happened in five issues regarding the over-arching plot: the President of the Somali Federation begins to use the Tree as a weapons platform and the discovery of the “poppies” in Svalbard. What we have instead are expository portraits being painted of the world of the comic. This is a world in the near future searching for an identity as it tries to reconcile its former standards of living with the fact that there are now monolithic, ambivalent alien structures dotting the globe, occasionally dumping acid on some major cities (see issue #1).

Elegia is a character in this world searching for her identity. After being the paramour/arm candy of the brute Tito for protection during the volatile changes in power in Cefalu, she turns to the Professor so she can make herself anew as one who can defend herself. It is yet to be seen whether or not she can be whittled into a knife of her own agency, or rather will end up as another tool in the arsenal of Professor Bongiorno — a man whose true motives have yet to be discovered.

Chenglei finds himself in city of artists in China which sprang up as a direct result of the Trees. In this bohemian paradise, he not only begins to come to his own as an artist, but also broadens his horizons in several other ways, as seen in the aforementioned orgy (though calling it “massive” seems a little prudish of you, Drew). The inclusion of transgendered characters being such a large point in this narrative surprised me, but I now see how it works for the world. I never associated China with being particularly open to the transgendered population, and though there have been some recent strides forward in levels of acceptance, the country features strict implemented guidelines for the transgendered and received a less-than-glowing report from the International Gay & Lesbian Human Rights Commission, in 2009 and 2010, respectively. This makes Shu, the artist’s getaway in the shadow of the Tree, special unto the world of the story by giving this marginalized population a haven, and I am excited to see what social/political commentary Ellis has in store for us. How will Chenglei’s identity match with that of this colony, and what role do these artists play while the scientists and militaries have machinations afoot?

Lastly, for now, we have Marsh — poor, poor, catatonic Marsh of the research station. Already the pariah for his refusal to leave the isolated base to return to England, his obsession with the “poppies” married with his obsession to matter in the face the aloof presence of the Trees leads him to being overrun by the alien flora.

His quest for identity may lead to his death, or possibly to something more crucial to the upcoming plot movements of the comic. The question burning the minds of both the reader and characters in the story alike is: “Will the Trees ever react to humanity’s actions?” I believe that this question will be answered within the next issue or two, and that Marsh may be the first step towards some sort of means of understanding this colossal threat. However, until then, we’ll all be forced to make like a Tree and…wait patiently.